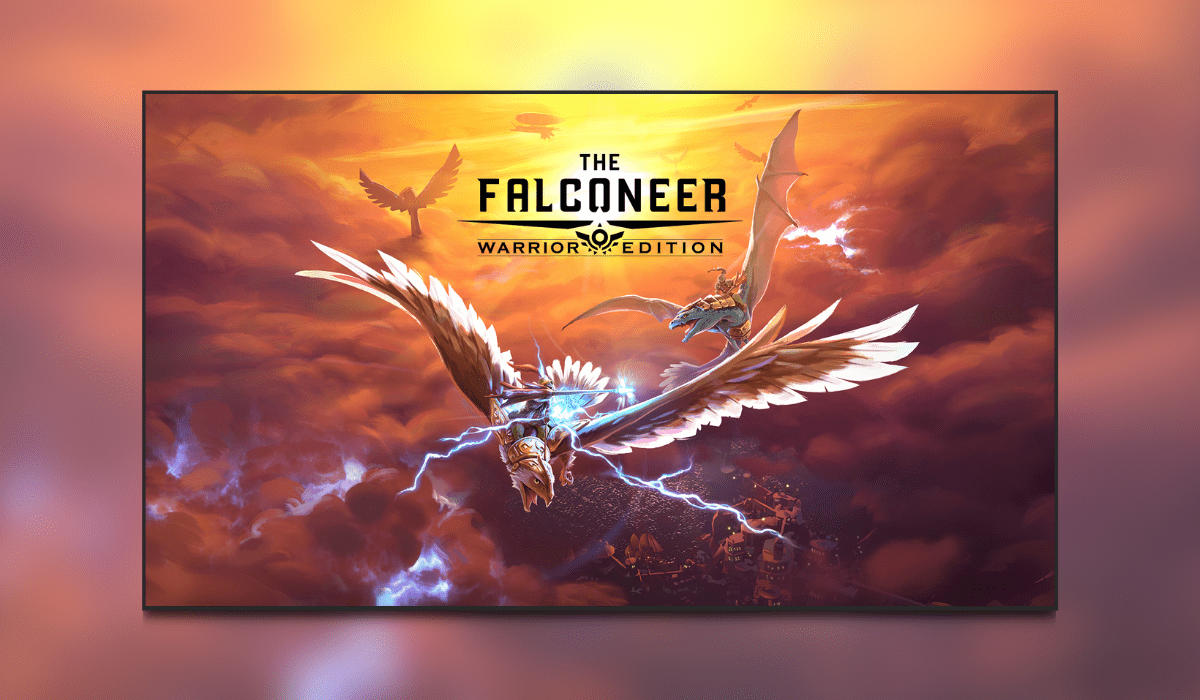 The Falconeer: Warrior Edition is an enhanced version of the base game with some DLC included for good measure. The base game was first released in November 2020 on Windows & Xbox series S/X. This version brings the game to PS4, PS5 & Nintendo Switch and is available now. With his debut, Falconeer comes from developer Tomas Sala and indie game publisher Wired Productions. Sala developed the game solo and Wired is known for games such as Deliver Us The Moon.

Taking place in Ursee, a world mostly water, various factions, and houses emerged, and all seek to gain power. As a result, the falconeers have become warriors, guardians, and anything else needed to survive, supported by their giant warbeasts.

This review is based on the PS5 version and you should also check out Jay’s review of the Series X version right here.

The Falconeer: Warrior Edition – I believe I can fly

When originally released, The Falconeer flew under the radar a bit for me. However, when the chance to play The Falconeer: Warrior Edition came up, everything I heard made me jump at the chance to review it and the game didn’t disappoint. If you feel the same or have other thoughts, please let us at Thumb Culture know in the comments.

Once you have picked your character with your preferred stats e.g. agility or speed you complete a helpful tutorial then are free to soar the skies. This means you can go through and complete the main quests and associated scores such as accuracy or take a detour and explore. The latter lets you put together knowledge on the culture and lore of the world which is surprisingly in-depth. The chosen character is often tasked with carrying out missions for their faction, often coming into conflict with other factions or groups like pirates.

The main quests are always going from A to B and often aerial combat throughout said missions. Aside from cut scenes and loading screens you will be in 3rd person flying around. I was glad to experience flying and combat were designed very well given significant they are in the game. Of course, that was in no small part to being able to fly with dragons as well as giant birds. Flying was fantastic in the beautiful environments from clear sunny days to thunderstorms. It all looked incredible and made flying a delight and fast travel something I rarely used. Depending on how you play, however, it can feel a bit sparse but that’s the joy of exploring the region.

Looking past the fact that you’re on a giant warbird, combat felt relatively realistic as opposed to a full-blown shooter you may find in Call of Duty. Firing and being fired upon forces you to be more deliberate with your actions. As a result, winning is more satisfying, and losing spurring you to keep trying. Combat did occasionally feel stale and repetitive but a variety of enemies helped counter this. Perhaps the advantage Call of Duty has over Falconeer is the former having an online multiplayer component. The open skies can feel rather empty when flying solo.

I played The Falconeer: Warrior Edition with the full capability of the PS5 with set graphics and on 4K & 60 FPS. The stylised graphics design did have downsides like NPCs in cut scenes lacking feeling despite quality voice-over. When in the air though, Sala did a great job with the environment & weather which again looked fantastic. I assume that coming out of the PS4 & Switch that this version of Falconeer may not be putting the PS5 through its paces. The stylised design may not call for it and I didn’t enjoy the game any less for it. However, I would have liked to see what the game could have been like using all the PS5 hardware has to offer. That being said, I did find when looking at the original version there were improvements to the graphics & design.

I mentioned before how much of the game is spent flying and in combat and The Falconeer: Warrior Edition does well to have the soundtrack & score compliment that. The environmental sounds from your mount to weather to sounds of battle all work well and I became easily immersed in each situation or circumstance. Dialogue also helps bring the primary NPCs you meet the personality you imagine which was great. Features such as other falconeers messages coming through the dual sense controller like radio was a very nice touch.

The Falconeer: Warrior Edition offers many hours of gameplay depending on how deep you get into it. Falconeer and its various chapters give it plenty to do and are very easy to revisit. The stunning visuals make simply flying the open skies a delight and the occasional skirmish fun too. The world has various locations and areas to discover that you may have missed if you focussed on the main campaign. And for the competitive among us, your score after the quests within chapters can always be improved upon.

I really enjoyed The Falconeer: Warrior Edition, made more impressive when I learned Tomas Sola developed it alone. The story unfolding by actively seeking it out, fun, and engaging flight & combat made the campaign very fun. It was just beautiful to see too, from the environment and features like weather and day-night cycle complementing the gameplay. I found the stylised graphics worked well but I would have liked to have perhaps seen the PS5 put through its paces. Whether focussing on the campaign or finishing 100% of the game you will find many hours of gameplay to keep you occupied.