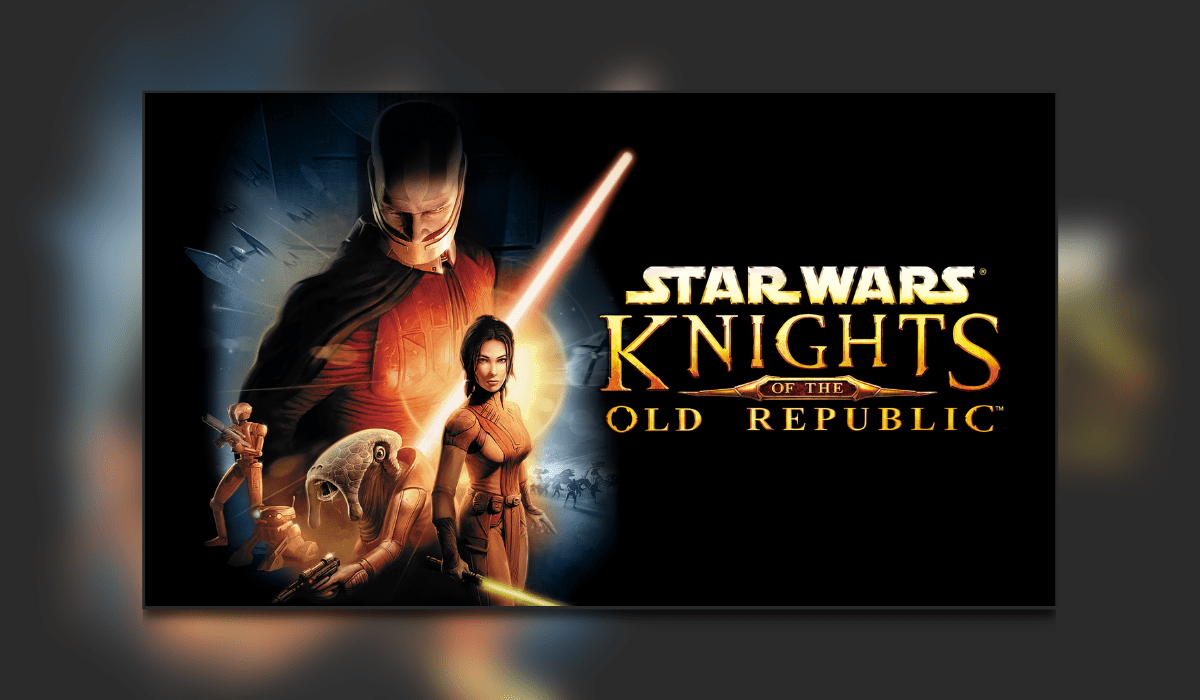 After almost exactly 18 years Star Wars: Knights of the Old Republic (KotOR) has come to the current generation of consoles. It is an RPG based in the sci-fi & fantasy universe of Star Wars. Developer & publisher Aspyr Media has brought a port of the original 2003 game made by developer Bioware and publisher Lucas Arts. The original KotOR was a great success, critically acclaimed and very popular even today. And of course having sequels and expansions, even comics and novels based on the setting.

Taking place 4000 years before the Skywalker saga, the old republic is under threat from the sith and Jedi are on the brink. The player character wakes up without their memories and is pulled into the centre of the conflict. However, the choice of whether you save the galaxy or seek ultimate power is up to you. The re-release comes shortly after the announcement of a remake coming soon to Windows and PS5. In the meantime, KotOR is available now on Nintendo Switch.

Star Wars: Knights of the Old Republic – Try not. Play or play not. There is no try.

I had never played the original KotOR and so when the chance came I jumped at it. It was a real gap in my experience as a gamer and Star Wars fan. If are excited about KotOR feel free to leave a comment for all of us at TC below.

I did come into KotOR with fresh eyes in this re-released version. The game begins on a badly damaged Republic spaceship with the protagonist (name and appearance chosen by the player) teaming up with Carth Onasi who agree to seek the Jedi Bastila Shan before escaping. You learn that the sith lord Darth Malak has created an armada and has invaded the republic with the Jedi struggling to defend it.

The setting borrows heavily from the extended Star Wars universe over the main film series. Most notably, it is set not long after the Mandolorian Wars. Onasi and Shan become two of several characters you can choose from as part of your three-person group. Each brings their own strengths and skills with the ability to rotate between them when playing. The plot of KotOR is very engaging, in no small part due to the rich worldbuilding from the films and beyond. I found myself really enjoying the story so far. I am keen to keep going and see how the main campaign unfolds and the numerous side quests. The relationships between characters, including the opportunity for romance, is always something Bioware has done well.

It was a pleasant surprise when I learned the character creation and combat were similar to that of Dungeons and Dragons. The mechanic actually came from a Star Wars TTRPG gameplay system of the time. I found character creation in KotOR gave a fair amount of variety and freedom, not being bound to your chosen class. This means having your choice of character background and allocating skill & ability points as you see fit. Later having the choice of letting the game level up for you and your allies. This degree of freedom with characters made for a much more solid experience, the various playable characters bringing different skillsets to the table. This freedom also extends to dialogue choices and decisions that can tip the scales of the morality meter. And could mean the difference between turning to the light side or the dark.

As much as I enjoyed the story and setting, the character movement and combat was disappointing. The use of turn-based combat and action economy in line with D&D was great on paper. But here combat felt boring as using the melee weapon or blaster equipped at the dictated combat. I consistently felt like it was putting the character into autopilot. Movement in combat was awkward and it was practically impossible to switch targets once combat began. Simply robotically moving to the next once an enemy died. Movement, in general, was average and too often the other party members became immovable barriers when doubling back which was very frustrating. A big plus is that playing the handheld is just as fun as on TV, perhaps even more so with the freedom to move around.

A re-release of the 2003 game was inevitably not going to hold up graphics and this was the case for KotOR. The visuals fell short when playing in 2021, especially with the set graphics. Many of the visuals felt blocky and lacked animation, especially the main character. Making cut scenes and dialogue feel out of sync with the voice acting. It is detailed enough to recognise the Star Wars setting but often lacking in detail too Despite not looking great I was glad to find the game ran smoothly when playing both on TV and handheld with the Switch.

Some of my strongest memories of Star wars are of the sounds and score of the films. KotOR definitely uses the classics from the music of the opening title screen to the sounds of lightsabers and more. It definitely puts its best foot forward here with the great audio and helps it feel like a Star Wars game. The voice acting was strong too, well delivered if occasionally ham-fisted but making the characters feel developed and fleshed out.

Especially for an older RPG, KotOR has a lot of content to sink your teeth into. The main campaign will keep you busy for many hours and the side quests for many more. I found the quest givers you meet to be engaging and so make you interested in their stories as you follow these threads. I would also be interested play it differently, making other choices. And by that I mean the different character classes, even be a bit more dark side than light next time around. I also discovered and promptly became hooked on Pazaak, a card game similar to blackjack. With many NPCs to challenge you, I hadn’t become as keen on a game within a game since Gwent.

Star Wars: Knights of the Old Republic is a great game with an excellent and engaging story within the extended universe. I found that it, understandably, doesn’t hold up from 2003 with gameplay and graphics. Movement and combat feel clunky and awkward much of the time. Likewise for the visuals but the audio was one of KotOR’s strong suits with the sounds and score we all know from the films. The worldbuilding here makes for a campaign I became invested in and enjoyed the various side quests. This gave me hours worth of content to dive into as well as seeing other features such as Pazaak to flesh out the game.

I am pleased to award Star Wars: Knights of the Old Republic the Thumb Culture Gold Award.

If you enjoyed my thoughts of KotOR then check out my review of Fantasy Town Regional Manager here.