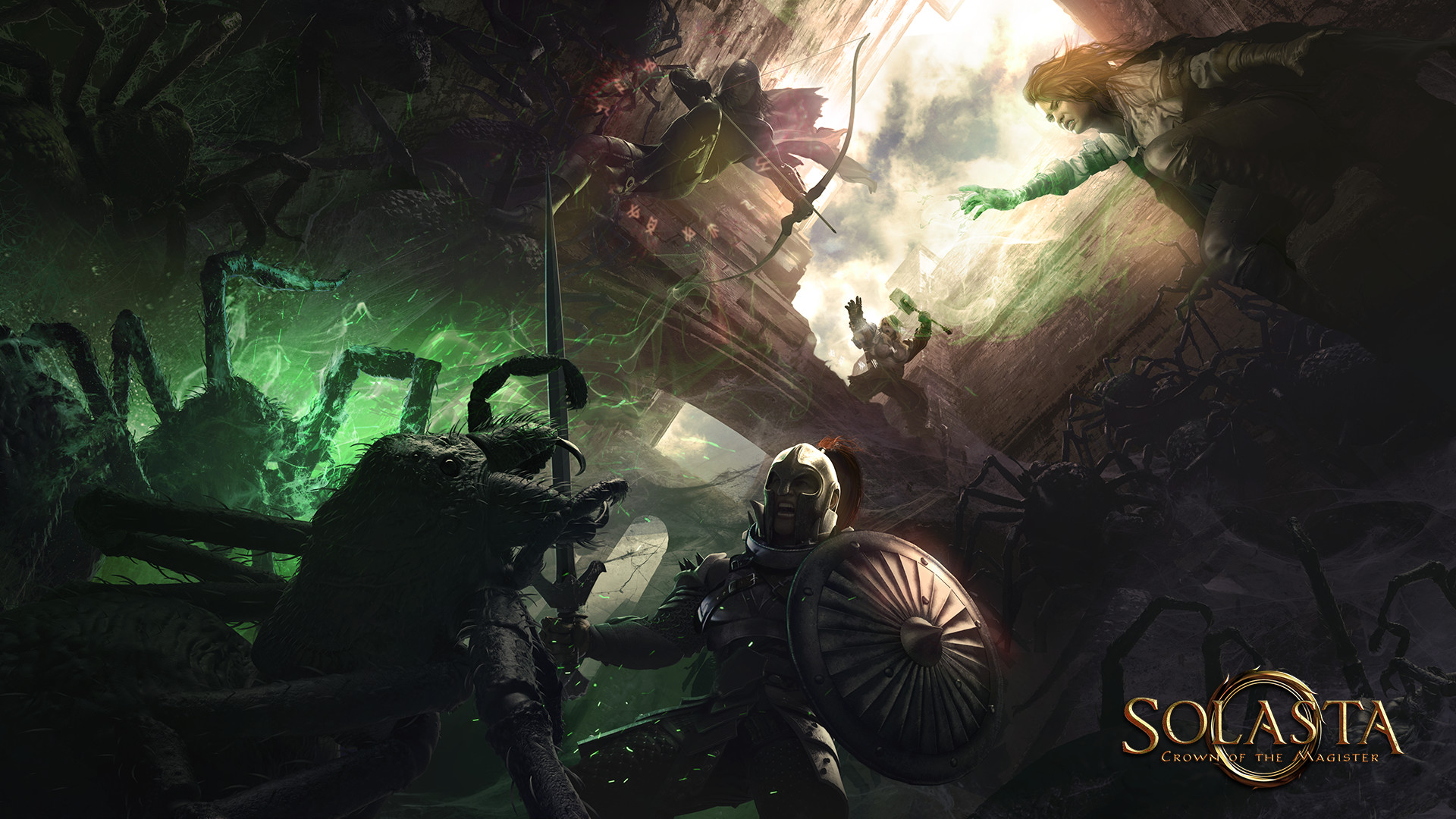 Developed and published by Tactical Adventures, Solasta: Crown of the Magister is a third-person turned-based fantasy RPG. Like the Divinity:Original Sin series it uses an isometric viewpoint with the adventuring party. Solasta is their first game and made possible by a successful Kickstarter campaign. 1000 years after the Cataclysm, you become part of a group tasked with keeping the uneasy peace. Using Dungeons & Dragons 5th edition you create your party to make the game your own from skills and abilities to character personalities. Still in early access so with more to come from Tactical Adventures.

“Roll for initiative, take attacks of opportunity, manage player location and the verticality of the battlefield in this Turn-Based Tactical RPG. In Solasta, you make the choices, dice decide your destiny.” The game is available on PC and can be found on the Steam store.

As a player of the tabletop version of Dungeons & Dragons, I looked for how Solasta worked using that ruleset and it didn’t disappoint. Beginning with character creation, the choices were limited at this stage of development but felt like D&D. Choosing classes, backgrounds and skills to best suit how I would play were gratifying with the different party members. Races and classes influencing physical and mental stats were just like the tabletop game. Levelling up had the same feeling when choosing spells for the casters and skill proficiency for the weapon wielders. This allows the player to further specialise and become a more well-rounded group. I found that Solasta stayed faithful to weapon skills too as with magic or other abilities. Considering the range of weapons in the 5E ruleset e.g. ranged disadvantage when in close quarters with enemies.

The game upon up and you travel to new areas around the land of Solasta. I experienced this through the use of a 2D map which highlights where I next was to go. It is my first time encountered the mechanic of fast-forwarding the days of travel between A and B. The journey summarises activities from playing cards to debating religion in line with the characters. Much like D&D, there would be combat encounters peppered into these journeys using a variety of enemies.

When it comes to combat, Solasta uses the same rules as D&D with character class determining speed per turn but also option to dash. The area you are in uses a 3D grid system for character movement taking into account vertical movement and occupied space. I really enjoyed the combat as felt really strategic on both sides when it came to positioning. The tactical planning of who to focus on and even when to retreat. With your party of four, you can also adjust to different formations, circle around an enemy or separate for the area of effect spells.  I also appreciated the mechanics of cover is included, letting the party regroup from a hard to reach archer can be just what you need at times.

I found that having a well-rounded party had benefits outside of combat. During conversations where a check/roll is needed e.g. persuasion you choose from the four-party members who will answer. I was pleasantly surprised by this departure rather than only being the controlled party member at the time. Their responses are different but can added charisma bonuses to better succeed and affect your relationship with the NPC. Still with the conversation option to not be as persuasive or charismatic of course.

Without spoiling the story you also come into contact the political council who run the country within the main story. These council members are heads of different guilds/groups and your relationship with them is measured by a colour meter. Doing tasks for them or tasks for other guilds all has an impact. From what I have experienced in the game so far this would have an effect down the line possibly even with the main story.

I played Solasta on PC using high settings across the board and my review is based on that. The world itself all came within detailed enough locations but all within smaller distinct areas you travel to and explore. The environments make great use of the game mechanics with everything from interactive objects to weather and this visual variety makes these settings fun to navigate. It shows that work went into the design of the setting and made it feel realistic in this fantasy world. Solasta’s various locations are separated even within areas of the same place with long loading times. The wait between locations helps explain how the setting quality is achieved versus other aspects of the game.

The visual graphics is where Solasta falls short in both gameplay and cut scenes when it comes to the various characters. The game visually is low detail in the adventuring group and people you meet. I used ready-built characters for the other 3 party members and the appearance quality was poor, particularly things like hair. These visual issues took me out of the game slightly for how far from realistic it could be. One other significant issue that arose was characters speaking. I felt that during in came dialogue and cut scenes the characters were unexpressive, faces not matching words or tone. On top of that when speaking the majority of the time the dialogue and speech animation would be out of sync, feeling like a poor ventriloquist act.

The character dialogue is one of Solasta‘s strong suits, with the party members and NPCs you encounter the voice acting is well done. Occasionally feeling a little wooden and stereotypical but helped feel more part of the world. The sound effects from groans when taking an especially brutal hit to push a boulder to make a path are all realistically detailed. An enemy landing a critical success with a battleaxe blow and subsequent cutscene instinctively led me to brace once or twice.

I thoroughly enjoyed the game’s score and the soundtrack was also very well put together. Moving from bustling cities to the castle ruins the sounds improve the setting and world-building, making for a more immersive game. It wasn’t only the sounds off the world and it’s inhabitants that threw me into the world of Solasta. The score in the main menu and travel map made me connect more with the PC as the party travels to complete grand quests for the country.

I focussed on the main story created so far and found it be too linear and within a small sandbox. The story itself is entertaining and with alot of world-building & lore to revisit. However, Solasta does offer several of the D&D 5th edition race & class types which offer variety in playstyles and enjoyable to use different skill sets. If like me you tend to stick to the main plot there are a few things to see you may have missed before.

Tactical Adventures have made a very good addition to the RPG genre with Solasta: Crown of the Magister. It takes features from its predecessors in the genre but has the made the game it’s own. Have built a rich story in a brand new setting mixing fantasy and politics and magic keeping you wanting to learn more. Using the Dungeons & Dragons 5th edition rule set making combat and character interaction interesting and fluid. Unfortunately, let down by some of its graphical design and voice-over when it comes to the characters. However, the visuals of locations and score & soundtrack make that easier to go through.

Still in early access so certainly more to come I am very much looking forward to seeing how Solasta: Crown of the Magister develops. As well as what the team at Tactical Adventures brings us next. 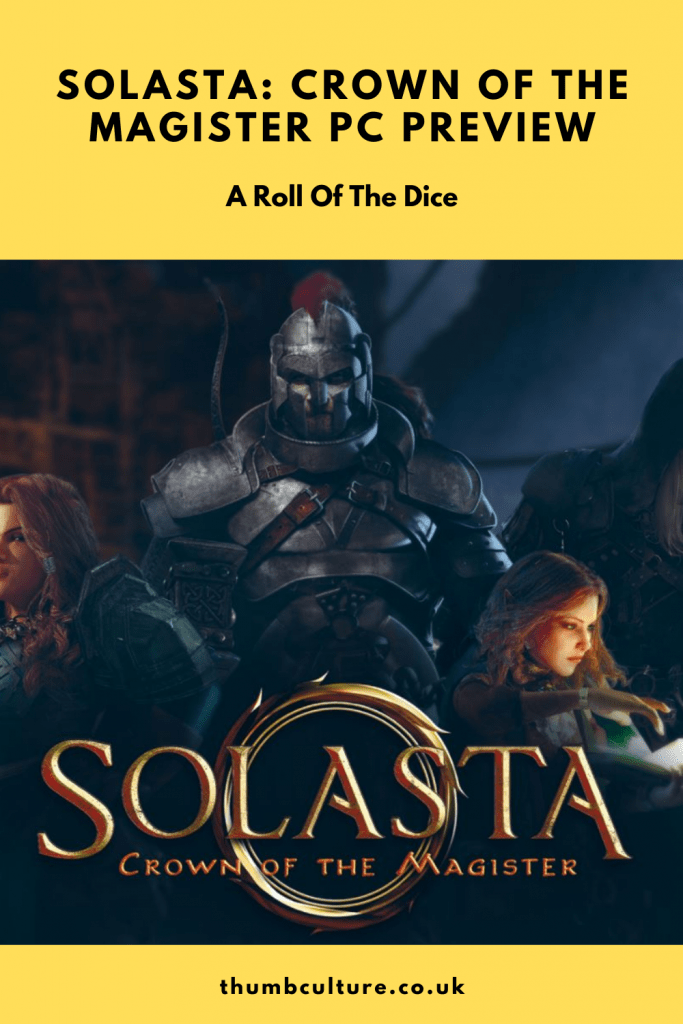