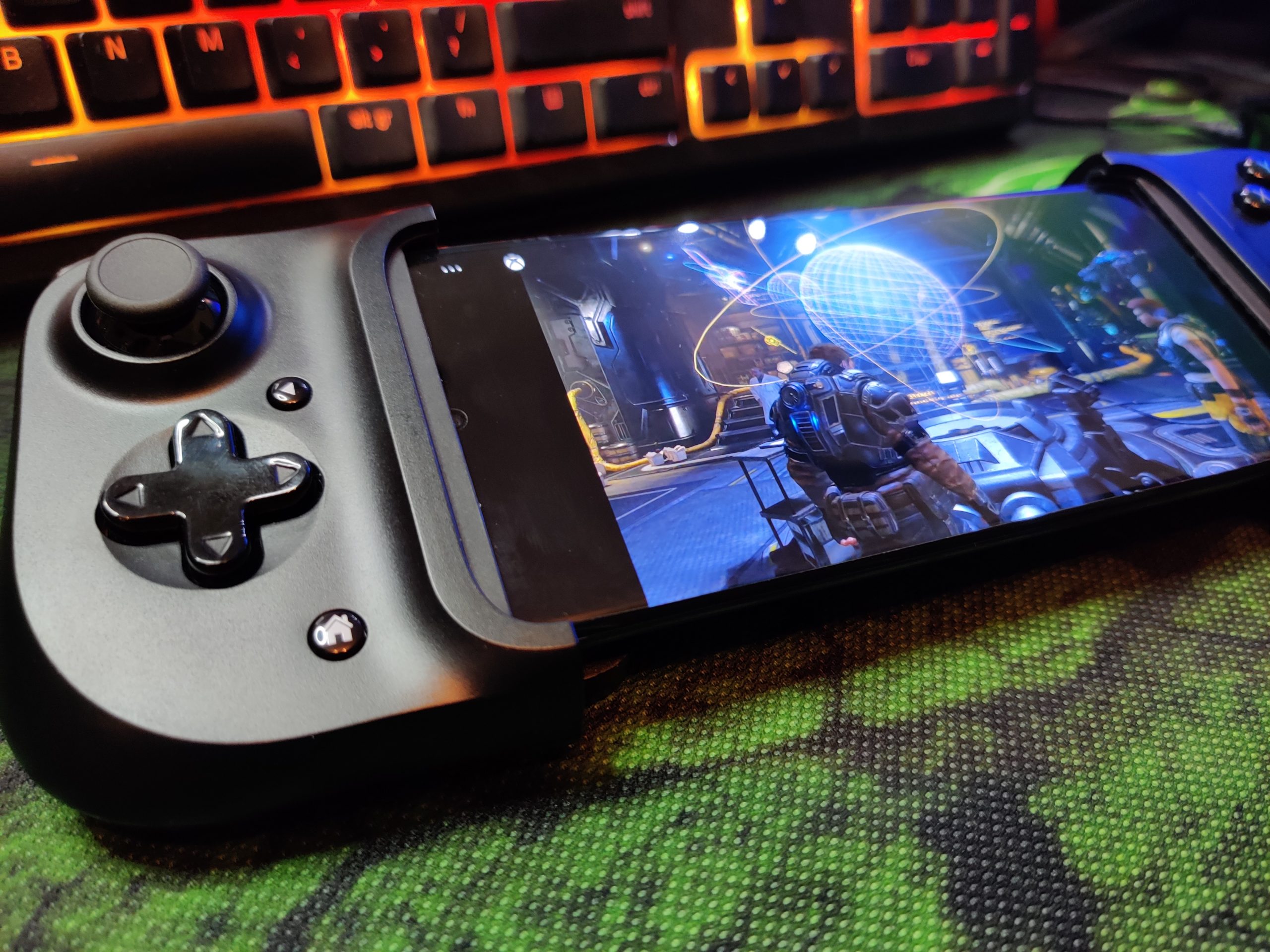 The Razer Kishi is a clip on mobile accessory that turns your smartphone into a portable console. Mobile gaming has often been frowned upon with hardcore gamers. A stigma that is soon to be obsolete as mobile chipsets, screens and cloud based gaming options continue to grow.

It’s likely no coincidence that the Razer Kishi is advertising alongside the likes of Xbox’s Cloud Streaming service. It’s clear from the layout and feel of the pad they’ve worked closely with Microsoft on this one. Sporting a compact design, but still evoking the traditional Xbox pad layout it does feel great in your hand. The flatter shape however does mean that sometimes it’s a struggle to comfortably use some of the buttons.

Fresh out of the box the Razer Kishi is surprisingly small and flat. It’s very reminiscent of 2 Nintendo Switch Joycons strapped together. The finish of the product is matt with only the Razer text and logo showing through with a gloss shine.

There are a few buttons that don’t immediately jump out at you from a purpose point of view. These are Razer’s answer to function buttons and ultimately replace the start and select of traditional pads. The face buttons look like an off-brand Xbox controller – the same X, Y, A, B layout but with the colours swapped around. The d-pad stands out as the weak link of the design though; with it’s glossy finish it doesn’t look quite as sleek as the rest of the pad. As an Elite controller user I am a lot more accustomed to the disc-like directional pads we’re seeing with modern controllers.

Flipping the Razer Kishi over you will find the mechanical link that separates the 2 halves. This acts as a nice way to store the controller, but also reveals a slightly elasticated band that helps the device hug your phone. It’s a simple system, but surprisingly secure. Attaching the device to your phone evokes the feeling of a Nintendo Switch, albeit this is a different beast. Once it’s attached to the phone it feels secure, but does have some wiggle room. Fortunately the rubberised grip prevents any damage to your phone. There are also cut out ports to channel your phones speaker to the front and a USB-C connection to allow you to charge your phone whilst you play. Note that you cannot use this port for headphones.

Once your phone is snuggled in the device feels great. The combined weight of your phone and the Razer Kishi makes it feel like a solid bit of kit, the only moving parts being the buttons. It’s not the same as holding a controller; a device this slim and compact simply can’t give you the ergonomics of a specialised controller.

I noticed straight away that my controller wasn’t quite right – a quick search showed me there is a Razer Kishi app. Using this app I was able to effortlessly update the firmware on the controller and also discover a library of games. These games ultimately boot up the app store so really it’s just a nice way of showing you options. It’s here where you might start to face problems, naturally a lot of mobile gaming apps aren’t designed with a controller in mind. As a big lover of Teamfight Tactics it was disappointing to not have a controller option, and I am sure many other games fall into the same fate.

Once you’re into the games that work though the controller runs like a dream. I played through rounds of Fortnite, PUBG and various free games on the appstore. Where the controller really excels though, and naturally why they’re becoming a must have item, is Xbox Game Pass. Microsoft have launched cloud streaming to the service and the Razer Kishi becomes the natural companion to the app. I have blitzed through so many games thanks to the convenience of lounging around playing or using it whilst I’m out and about.

The truth is this isn’t a replacement for an Xbox pad, or trying to be a Nintendo Switch. This is a nice alternative control scheme for mobile games, and an important asset as cloud services such as those from Xbox and Stadia become the norm.

I am led to believe that because of the direct connection to the USB-C of the phone it also delivers a low latency input. Historically I haven’t dabbled a lot with Bluetooth controllers on my phone, but I can definitely vouch that it is a low latency device. Personally, I never once experienced a moment of frustration or unresponsiveness in my time with the Razer Kishi.

The Razer Kishi uses a USB-C connection; which naturally may rule out some older devices compatibility. On top of that there is a limit to how far the gadget can open, and equally how small it will retract. I am using a Samsung S20+  and it fits perfectly. The official word from Razer’s own marketing reads as follows:

“The universal mobile controller’s flexible design allows it to be stretched and clamped on most phones, providing a secure hold that’ll never come loose while you game.”

I am willing to believe that, as having a browse of the compatible handsets they’re similar to my own phone. I happen to have access to a few phones that aren’t listed in the official spec sheet and those work too. One thing to be aware of is that if your phone doesn’t have a speaker at the base (i.e. next to the USB-C) it may muffle your sound. Even front facing speakers could face a problem if the rubber grip overlaps them.

It has been an absolute pleasure using the Razer Kishi to explore games on the Google Playstore and the Xbox Cloud Streaming Service. The compact design lends itself well to portability, but does mean that some of the buttons can be hard to reach; specifically the D-Pad can feel awkward at times when it’s so close to your thumb. As someone who is particularly sensitive to damage to their phone I also trust the Razer Kishi to not scratch it up, and offer a degree of protection. You can see evidence of that as my protective factory film is still on the back of my phone in the photo above; I keep it in a case too.

Playing games like Gears 5 and Slay the Spire with my phone has been an experience that a few years ago I’d have brushed off as hokum. Razer however have brought this to a reality though with an affordable and compact device.

I’m awarding the Razer Kishi a gold award; it really is one of the best, if not the best way to experience mobile gaming at the moment. Throw in the options around cloud streaming and the convenient Kishi app for game discovery and you’re on to a real winner. Whilst you can connect any modern console controller via Bluetooth it’s a lot more cumbersome.

Disclaimer: A Razer Kishi was received in order to write this review. 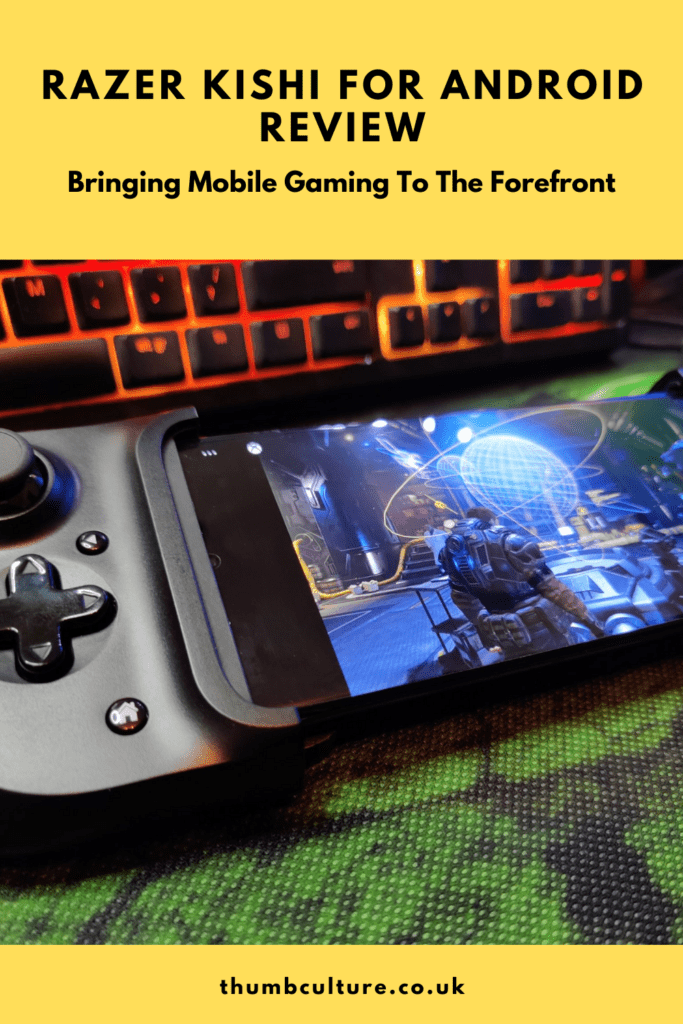