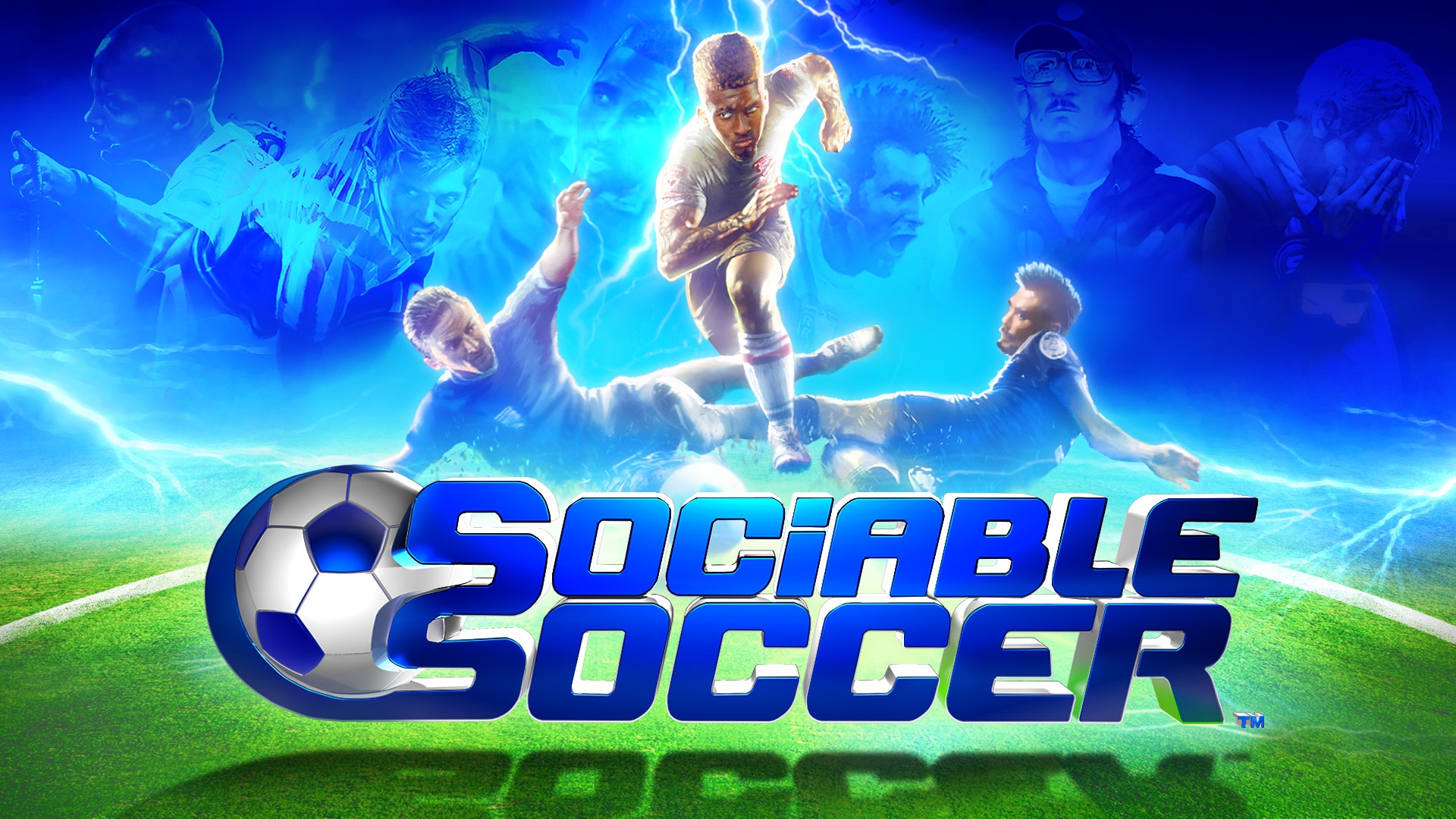 For gamers of a certain age there will be fond memories of playing a simple but awesome football game called Sensible Soccer back in the 90s.  For me it was THE number one game to play with my friends on our Atari ST. Fast forward to now and Jon Hare who was the designer behind my favourite game back then has reappeared on the gaming scene with Sociable Soccer.  Made by Tower Studios and Combo-Breaker, Sociable Soccer is currently available on Steam Early Access for £14.99.

With my misspent youth seemingly like a distant past I was more than happy to get my boots back on and take to the pitch!  Was Sociable Soccer going to win a trophy or go for an early bath?

Sociable Soccer has a simple, easy to navigate menu currently displaying as “Boss mode”, “Trophies”, “Options” and “World”.  Being an early access version, there is still work going on in the background with regular blog post updates as to what has been added or altered.

Selecting “World” takes you to a sub-menu where you can choose to play a club friendly, national friendly or a custom friendly in either a single player or two player mode or if you want select from a number of international cup, league and tournament events.  In total there are over 67 fully researched events.  Plunging straight into a club friendly a huge smile crossed my face as I selected my team (Arsenal) from the huge list of clubs as I remembered that the club was known as “Ashburton Grove” back in the Sensible Soccer days.  Due to the licensing laws, many of the 1000 clubs and 30000 players have different names however they are not too dissimilar from their originals, for example “Cech” is “Cash”, “Ozil” is “Ozet” and “Ramsey” is “Ransay”.

Controls are easy to get along with.  None of this complicated Fifa or Pro Evo multitude of button combos are required here!  Left analogue moves and selects the player as well as letting you add after-touch to the ball while the buttons allow you to chip, hoof, kick and pass when attacking and all become a slide tackle and form of a header when the ball is in the air.  The addition of a sprint button and the ability to change formation are present with a tactics/substitution button coming soon.  Sociable Soccer will definitely test the quick fire action of your fingers!

Playing the matches can seem challenging at first as the gameplay is quite fast paced however once you get used to the controls you will find yourself rapidly winning challenges for the ball and timing that oh so beautiful header into the top net!  The movement of the players is fluent and makes for a really enjoyable arcade game of football.  One of the main features of Sociable Soccer is that the camera view can be toggled between a 3D and a 2D mode.  3D is a Fifa style sideline camera however the 2D view is where nostalgia kicks in.  For all you Sensible Soccer fans, 2D is where it is at!  The top down 2D view is exactly how you remember it with the pitch orientated in a portrait layout with goals at the top and bottom of the screen.  The players become smaller and for me the excitement really heightened as I am cast back to sitting on the end of my bed, joystick in hand attempting to thrash my best mate.

There is a constant atmosphere during the matches with either the sound of the crowd in the background or the players making little sounds as the slide around the pitch.  When a goal is scored, and it tends to happen quite a lot depending on how bad or good you are, the crowd roar to life and a replay is shown in 3D with the crowd visibly on their feet.

Boss Mode is not a “football manager sit back and watch” event but rather a campaign that apparently has atleast 100 hours of gameplay to complete.  In Boss mode you have a rookie manager who you level up by playing through tournaments.  I started in the Australian Cup where I took charge of Central Coast.  Entering in at the quarter finals I was requested to get the team to the semi finals and keep the cup run going.  Facing off against Sydney I next arrived at a team and formation selection screen where a simplified card system, a little like Fifa, allowed me to make changes to my team and see the player stats.  The ability to select a strategy is one that will be available in a later version.

Playing as Central Coast I played a thrilling game that ended 1-1 and went into extra time.  That was uneventful and the dreaded penalties ensued.  Here is where some of the wheels began to fall off.  I had been playing in 2D mode however for the penalty shootout the camera chose to be in 3D but behind the goal.  It took me a while to wonder what was going on as little “X” symbols began to appear under each team.  Yep, the shoot out was happening at the other end of the pitch!!  I quickly changed to 3D mode and low and behold I found myself at the last 2 penalties.  They missed and it was down to my last penalty to secure the game as neither team had scored.  I quickly snapped at the left analogue and placed my kick into the bottom left of the goal and the crowd roared.  I roared as well, we were through to the next game! Well that was until the score showed 1-1 under the cup game results followed by the club chairmen regretfully telling me that it was the end of the road for me.  Feeling a little annoyed I abandoned the boss mode.  Clearly a bug but a very annoying one that made the game mode unplayable if it went to penalties!

For the price I would say that Sociable Soccer is not disappointing when it comes to the graphics, they are clear, vibrant and eye catching.  The players are crisp and gameplay animations are smooth, yes there are a few glitches on occasion such as players not seemingly running but gliding across the pitch however remember this is still only early access.  I found the actual fluidity of the gameplay excellent and thoroughly enjoyed the matches.  The attention to detail such as the football club logos is brilliant, particularly when there are licensing issues however Sociable Soccer has successfully skirted the issue with once again their own twist on the iconic emblems.

A very catchy dance track accompanies Sociable Soccer with a kind of disco retro feel to it.  The music wouldn’t be too out of place as a 90s cartoon theme but it works, it is a fun arcade football game after all.  There isn’t any John Motson commentary during the matches but then in Sensible Soccer there never was either.  Sound effects are purely game orientated with crowd chanting, ref whistles and the sounds of players as they let their emotions out with each play similar to tennis.

Bugs aside, I really enjoyed my gaming experience with Sociable Soccer.  Being a big fan of the 90s hit game Sensible Soccer has helped this due to the nostalgic element that Jon Hare has carried through but whether the appeal for the game runs as strong with younger gamers is yet to be seen.  Sociable Soccer has the potential to be a fun take on the football genre especially with online multiplayer touted for the future.  There are planned versions for the PS4 and Xbox One as well as on mobile phones (iOS and Android) however currently there isn’t any confirmed release dates for these. I award Sociable Soccer a Thumb Culture Gold.