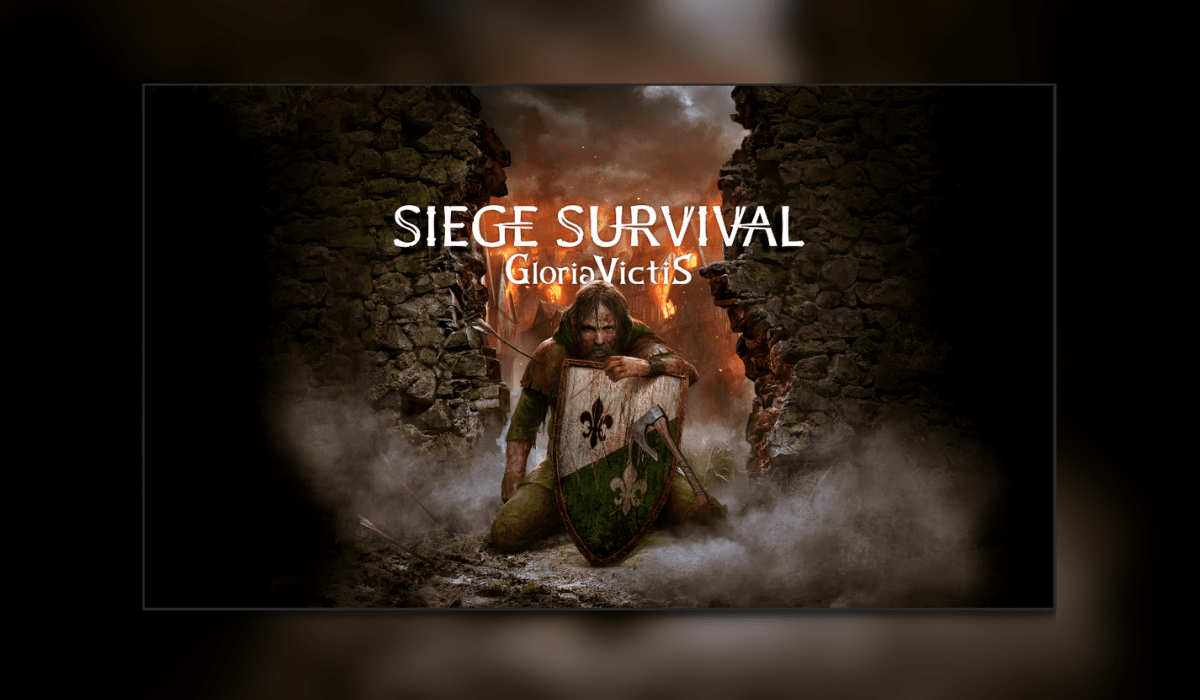 Can Siege Survival: Gloria Victis stand tall like a king or will it get lost in the crowd of peasants? Keep reading to find out. Let us know in the comments what you think, and as always, check out my previous review here of a fun little game called Sockventure.

In Siege Survival: Gloria Victis we start by playing the role of a survivor of a mass siege against a castle. Our survivor is named Flint and he was simply a worker before the attack which has changed his life, forever. We’re first given a bit of back story about what has happened in the game. We find out that a raiding army named the Ismirs have come to take over our land, the Kingdom of Midland during the summer of the year 1205.

I started my fight for survival with two choices, who should the remaining outnumbered guards protect? The fleeing citizens, or the workers who are salvaging supplies? The choice is entirely up to us and can result in us starting with fewer supplies should we choose the wrong option. The story continues, telling us about the Ismirs taking our soldiers down, one by one, street by street, and murdering anyone who did not escape the castle. We’re given a further two choices, “We thought things couldn’t get any worse, when…” We glimpsed a monstrous figure. Or the barracks were destroyed. Again choosing a different option affects your experience, just like before.

Our sole survivor awakens, the game now begins. We’re given a short tutorial on how to control the camera with either the mouse or keyboard. We also have our first objective. We need to talk to another survivor who is nearby. Flint realises this is Bertram, the local carpenter. We soon learn that his family has met a terrible fate. Next, we need to build some small structures, a stump with a sawhorse and a campfire. At least we can now chop up some firewood as well as cook food.

This is literally only the beginning of Siege Survival: Gloria Victis. The game is pretty in-depth with the story but of course with Thumb Culture being a spoiler-free site, that is all you’re getting out of the story from me. We’re soon introduced to some chickens and a couple of pigs. Clearing the rubble away from the pigsty and chicken coop allows us to feed them. We must keep these animals alive as they can offer ways of surviving the siege.  We also soon learn about hunger, thirst, tiredness, and more. All of these need to be managed correctly to save your survivors from meeting their untimely death and whilst keeping them fit and healthy enough to work through the day and scavenge through the night.

As the day passes on, naturally, it turns into night. This is where the game lets you venture out into the castle grounds. This is where you need to rummage through rubble, barrels, crates, and more. This helps you in your fight for survival. Also, keep your eyes peeled for items that you can send to the bastion to help the soldiers in the fight against the Ismirs. You also need to keep a watch out for enemy soldiers patrolling the castle grounds whilst you’re scavenging for items. They attack on sight, so be careful. Characters can run away if spotted. As long as that character is fit and healthy enough to run, of course.

Bastion? You say. The bastion is where the remainder of our army is literally fighting to the death to try and save their castle against the enemy attackers. This is a pretty simple system and you don’t see the bastion itself, this just appears as another menu system when you click the bastion button at the top of your screen.

You can send them food, arrows, weapons, armour, water, bandages, and more to help with their defence against the Ismir army. All of these items can be found whilst scavenging the castle grounds. You can also build structures to help in this battle. You can build a forge, for example, this will then allow you to build iron bars to help repair weapons and armour for the soldiers. There are many structures to build, all of which can be upgraded. This helps you in your fight for survival against the Ismirs.

Can you survive? Only you can answer that question.

The graphics are surprisingly good in Siege Survival: Gloria Victis. I saw that it looked good in the trailers and screenshots but they do not do this game the justice it deserves. It truly is a beautiful game, and that’s not something that comes often with this style of game, in my opinion. When you zoom into the gameplay you can see how much love has gone into the design of the game, such as the textures and character models.

The audio in Siege Survival: Gloria Victis truly fits the scenario of the game with the highest of qualities. For example, when under attack from enemy fire arrows, you hear the thud of each arrow as they pelt down onto your camp. The musical score in the game sounds great too. Nice and calming when you’re trying to survive the days and stealthy sounds and music for the nighttime adventures.

This game will literally last you hundreds of hours. You’ll have to put the time in to learn the best routes to take. How to get structures quicker. Keeping animals alive. It has a massive learning curve but one that is well worth it. It is all very rewarding to those who put the time in.

Siege Survival: Gloria Victis is a fantastic game that deserves all the credit I can give. It is available now on Steam. This game is so in-depth with each of your people and it’s brilliant. There is a lot going on but the game does not bombard you and just makes you think “That’s it, I am not playing that”. If you were a fan of This War of Mine then this will definitely wet your whistle. As mentioned this is a fantastic game therefore Siege Survival: Gloria Victis gets the Thumb Culture Platinum Award from me. 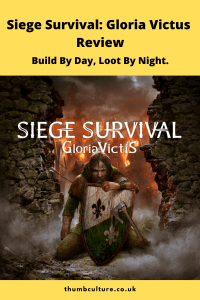