Shiness: The Lightning Kingdom PS4 Review – Is This A True RPG?

Shiness is a game you’ve probably never heard of, but if you’ve mourned the loss of Playstation 2-era adventure games over the past decade, it’s one you should look out for. Shiness is an Action-RPG ( or what I’d like to call more as a JRPG ) developed by French independent studio Enigami, promising to take you on a journey through an enthralling universe on the verge of collapse, following the fragmentation of planet Mahera. The game’s universe was born over 20 years ago from the pen strokes of Samir Rebib, Artistic Director of the studio. You play as cutey Chado and his companions, traveling through the Celestial islands on their flying ship. After crash-landing on one of the most hostile of the Celestial islands, you find yourself in the middle of a conflict across multiple kingdoms. However, this volatile situation might find a peaceful outcome, with Chado’s newfound unique ability to perceive and communicate with the ‘Shiness’, a mysterious spirit imbued with magic. So, will Shiness live up to the developers promise? Lets have a look at what I found…

I started off as Chado, a very cute creature called a Waki. It wasn’t long before I came across my very first “fight scene”, a very basic brawl with a Kocli, who looked like a walking plant of some kind. Fighting feels natural enough and since the arenas are 3D, they offer more space than most fighting games, but the basic principles remain the same. In combat you’re playing a combo-based fighting game, complete with dodges and parries that feel lively and responsive, even if they’re not on the level of a Street Fighter or Batman Arkham game. For those not versed in fighting games, and so possibly not used to worrying about timing attacks perfectly and input accuracy, the elemental affinity system is a massive boon. It means you can use sly tricks to keep you kicking ass while you practice your fighting skills. And since it’s an RPG, abilities and techniques will be unlocked over time instead of being flung at you all at once, giving you time to get to grips with them before learning a new one. 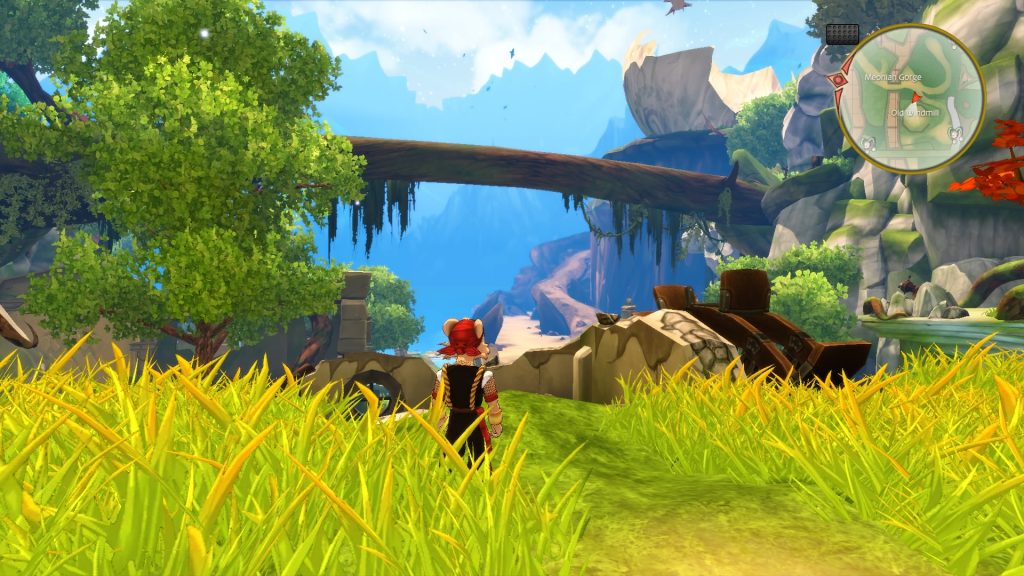 The world is a series of floating islands and supposedly boundless areas you can explore but I didn’t find this at all. As I’d look around at how beautiful the art work was of a nearby mountain, I’d find myself wanting to explore it but only to be hit with an invisible air wall indicating that I didn’t have access to that part yet.

I found this extremely frustrating and made my so called adventure, much smaller. There were things I wanted to touch and interact with but, it was obvious from the developer’s low budget that this was something they didn’t have time to really add into the game unless it was part of the story, although there were some chests I could open and small animals like hedgehogs and butterflies I could catch. When coming across a puzzle, I found myself thinking way too much about it and spending ages wondering “OK, what do I do here?” where in reality, it was pretty basic and straightforward but I am more used to complex puzzle decisions and I adapted that thinking here where there was no need. 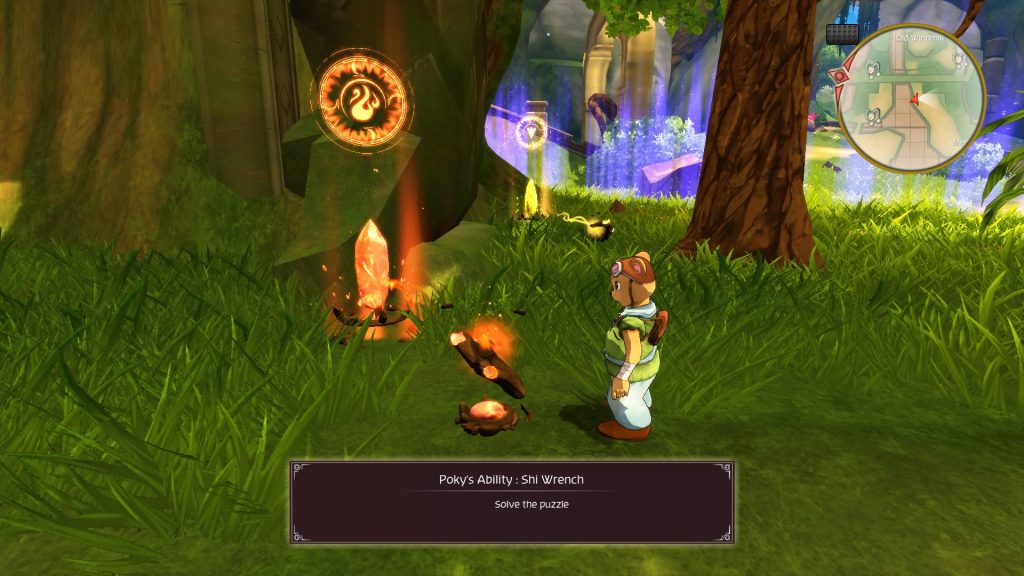 The character-specific puzzle mechanics play a role in general world exploration – for example, you can use Askel’s whip to reach far-away objects, or light dark dungeons with Rosalyn’s fire affinity – and while the reward will never be a bone dagger or greataxe, completing side quests and finding parchments does at least expand your moveset

Loot takes a big backseat in Shiness: The Lightning Kingdom (pronounced ‘shy-ness’, in case you wondered). There is still new gear and martial arts weaponry to acquire for each of the game’s five characters you get to play (Chado, Poky, Rosalya, Askel and Kayenne) which you obtain through the traditional means of questing and hunting the world’s various creatures.

Chado – This daring young Waki dreams of travelling far beyond his home town Kimpao – and this desire quickly lands him in big trouble!

Poky – A faithful friend to Chado, Poky has an incredible talent for engineering that makes up for his lack of courage.

Rosalya – Shy but loyal to the party, Rosalya has a powerful affinity with fire and is on the search for a mysterious truth.

Askel – A formidable young mercenary, the enigmatic Askel already has a far-reaching reputation in Mahera.

Kayenne – A strong, natural born leader, Kayenne remains calm in even the most difficult situations 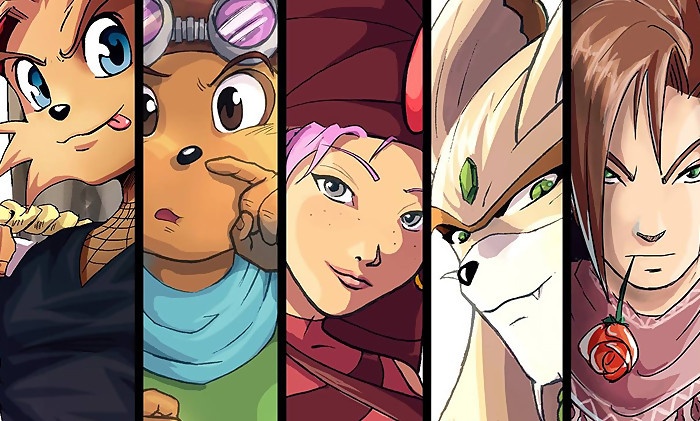 Shiness is absolutely beautiful. The art style pops in every place you adventure and the colours are so vibrant I found myself for most of my game play staring aimlessly at the Trees, Mountains and Ocean.

If you are looking for some state of the art PS4 graphics here, you will be disappointed as Shiness pretty much feels and looks like a PS2 game. This is not a bad thing as PS2 in my opinion was probably the best PlayStation console made so if you enjoy games like The legend of Kay and the legend of Zelda wind waker, you will love how this game looks, almost like a whimsical surrealism of a Studio Ghibli film. My favourite part of the graphics was when the dialog between characters broke off into a comic page style format, I found this very creative and engaging, even if the characters themselves weren’t. 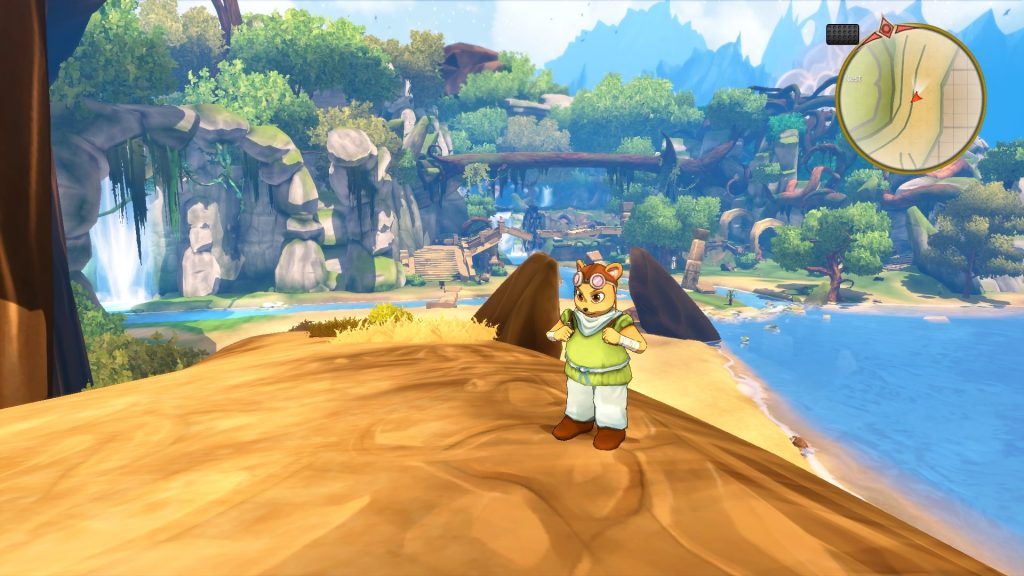 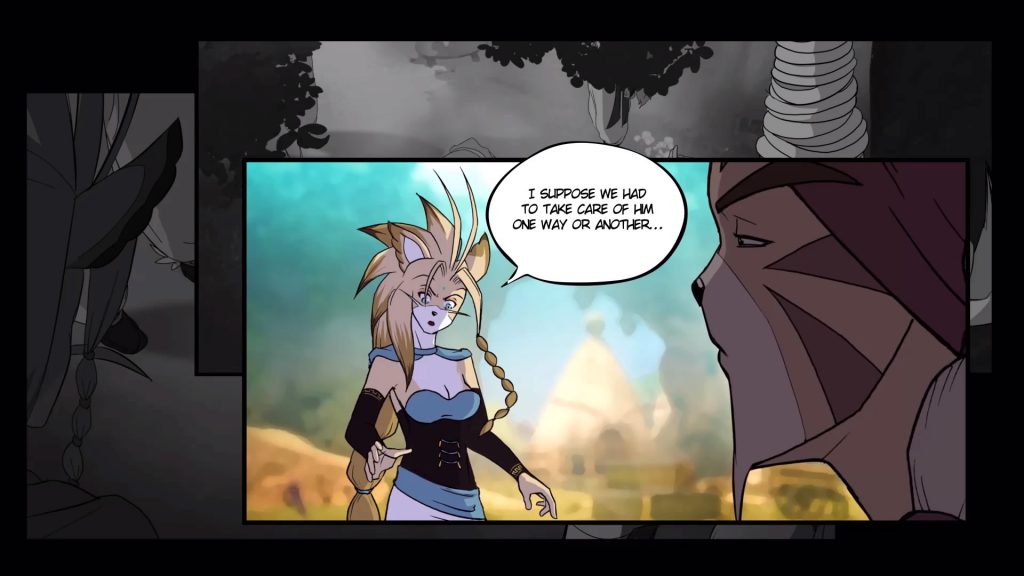 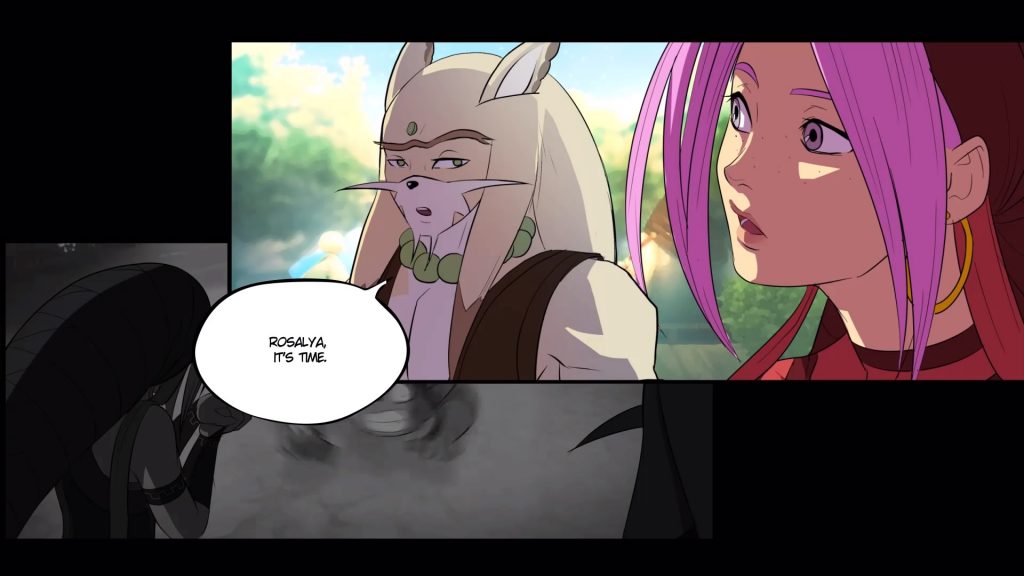 Audio – The music is what you’d expect from a game like this, whimsical and magical. The original soundtrack is composed by Enigami co-founder Hazem Hawash and it comes in with flute like tones followed by chimes/bells of some sort that only makes me want to either take a nap or sit on a mountain top to meditate! It flows very well with the game mechanics. There were times when I was running or throwing an object and the sound would follow a second later so some lag was in play here but all in all, the audio was mostly fine and in tune with this genre of game.

Value for money- There will be plenty of people out there who will love this cute JRPG game and I could see why but for me, I wouldn’t feel comfortable spending very much on this if any at all.  The biggest clue that Shiness wasn’t developed by a large, veteran JRPG studio is the length.

While Enigami promises a meaty game, they’ve eschewed the bloat that so many modern RPGs consider a feature, and expect players to spend around 30 hours exploring the world, not 100.

This in my opinion isn’t a “true RPG” game so in saying that, I think I’d personally wait until this is free on PlayStation plus unless quite a few things change in game.

Conclusion- I found Shiness, at first, very promising. The art style is something I love and the graphics are beautiful to walk around and look at but, there is just too many factors I didn’t enjoy. I felt very restricted that I couldn’t go where I pleased, the game itself lacked any deeper substance and meaning, I felt very little care towards the characters and the lack of interaction with the world was very disappointing.

You could see the spirit behind this game, which is the frustrating part as this could have been something special but, I feel the lack of money and time the developers took making this, very much showed in the end.

The Steel Circus alpha test is now open for all you PC gamers to ...

Goblin Sword Switch Review – A tale best for Switch. I have one of pixels and goblins

The console wars have raged on for years. Whether it's SNES vs Mega Drive, ...