Rugby 18 is developed by French studio Eko Software and published by Bigben Interactive. Eko Software might be known for their diversity in game genres, creating both the How To Survive games as well as a game about Handball.

The game boasts 65 officially licensed teams with more than 2,000 licensed players and bringing teams from some of the biggest divisions including the Pro 14, TOP14 and the Aviva Premiership.

So with a break in the Rugby games for a few years, is Rugby 18 going to revolutionise the genre and bring life back to a neglected sport? Let’s find out.

When you first load up Rugby 18 you are taken through a tutorial match, and explained each of the controls. Well that is if you happen to be in the situation where you need instruction. For example, if the ball goes out of the sidelines for a line out then you will get the tutorial for that. If it doesn’t go out, well then you are on your own. Thankfully there are three tutorials in the options menu, the Scrum, the Goal Kick and thankfully, the Line Out. Passing is handled with the L1 and R1 buttons, with longer passes being carried out by holding down the button. The face buttons carry out a number of actions depending on the play situation. They can either carry out a number of different kick types, or put players into the ruck or maul. Once you get used to the location of all the buttons and how they operation the game is actually quite rewarding when you put together a great move. 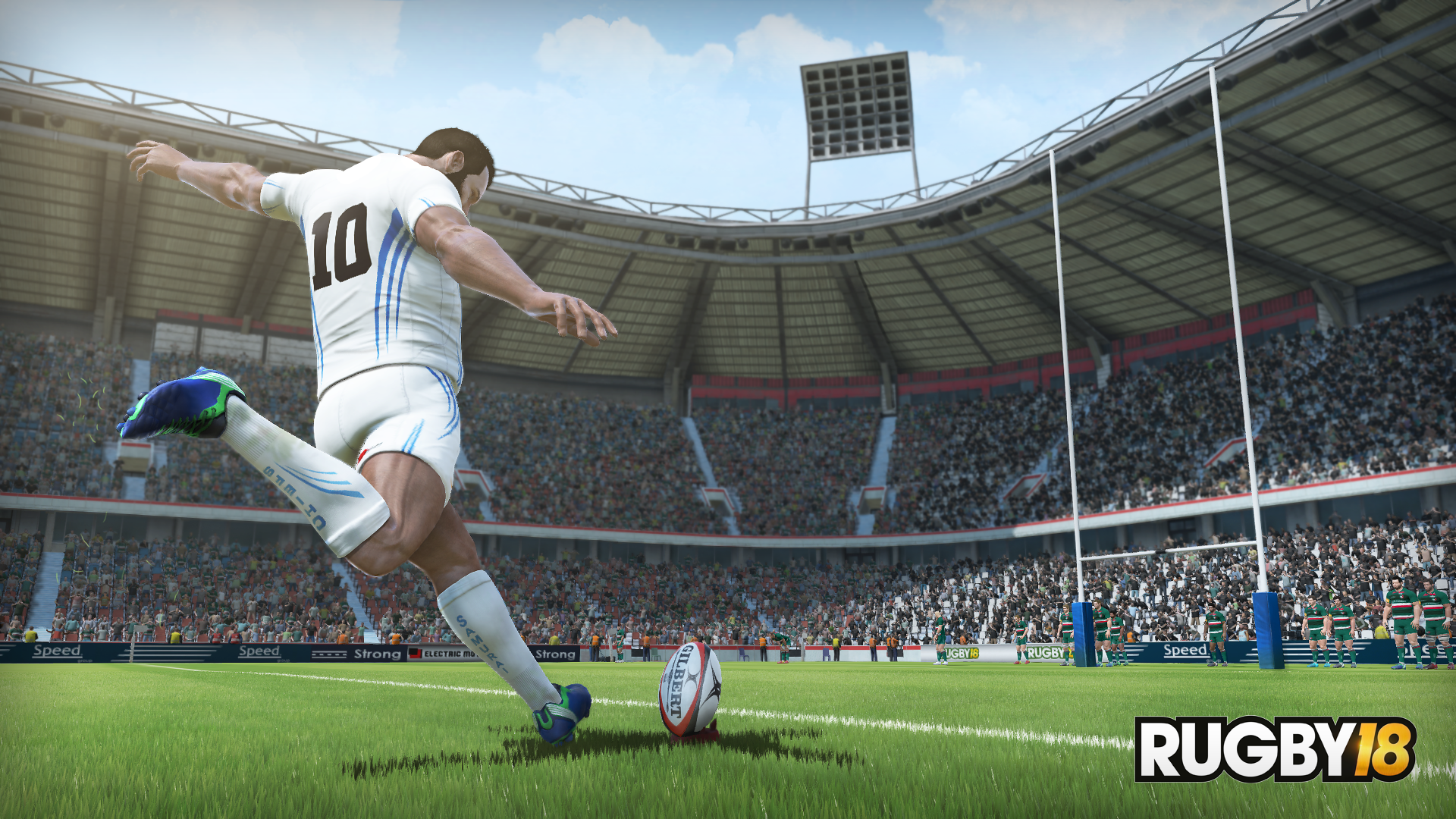 Kicking for a conversion

There are a number of game modes in Rugby 18 that you can take part in, a league mode, where you control your favourite team and head through a season. Head into the career mode and you can take your favourite team and assemble a brand new set of players to take part in minor leagues, moving your way up until you are taking on the biggest teams in the game. Alternatively take on the Ultimate Team style game mode of My Squad and using the points accrued in other game modes, purchase your favourite players to build an unstoppable team of Rugby superstars. Outside of these game modes you have on online mode which unfortunately was not operational at the time of review.

So how does the gameplay actually work on Rugby 18? Sometimes its spot on and you can carry out intricate moves, however sometimes it can be a bit rough around the edges. You run over a loose ball and your player just ignores it and runs straight past. The tackle system could be better, using the X button to carry out a tackle when a player is nearby. This is hit and miss as well, if you are controlling a particular player then I would recommend using the right stick to carry out a stronger tackle. While we are talking about switching players, there are three different ways to change players, L1 and R1 switch players left and right, X Changes to the closest player to the ball and the triangle button changes to the Full Back. This can get a bit confusing when the game has broken down and there is a large number of players in one location. I ended up spamming the buttons to try and tackle the opposition, sometimes it was successful and sometimes the opposition just plodded through my defence.

One area where Rugby 18 let’s itself down is the graphics. Whilst they are good, they will never be as good as the player models in games such as FIFA. Now whilst this isn’t a bad thing as FIFA have been working on their models for a while, the character models could have been better. There are a number of different model types to depict the larger players in the pack and you can definitely see who the speedier wings are. 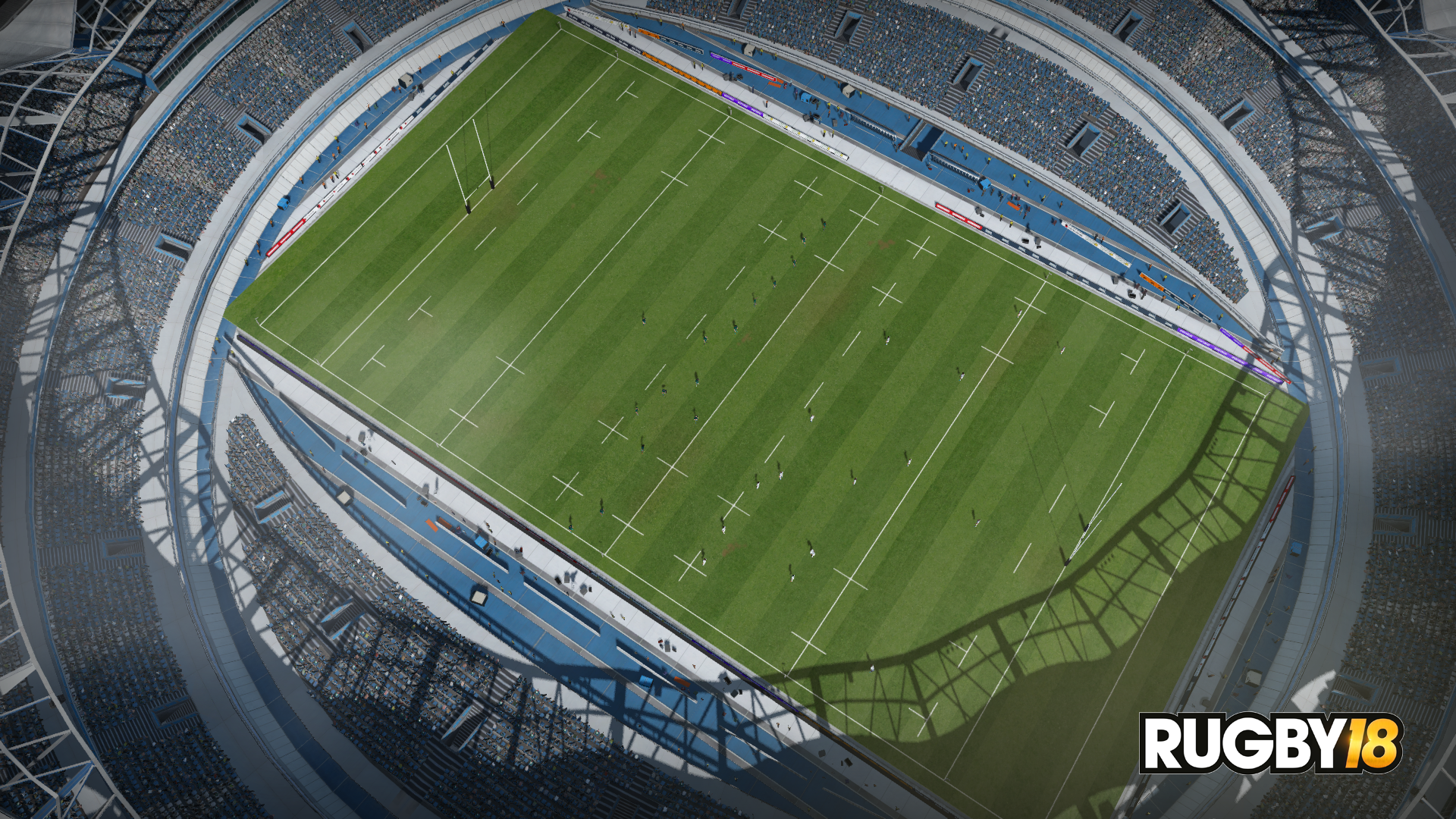 This is the first thing that you will notice during Rugby 18 and that is the commentary. Its made up of entire statements that are pre-determined, you can tell this as there is a distinct break between each statement. Its made even more apparent when you are listening to a longer conversation, the number of breaks that you can hear is not good in a game these days. Other than that the big hits and game sounds are absolutely passable. Its hard to compare it to anything other than the real life game, and it is pretty accurate.

Rugby fans will probably enjoy Rugby 18 the most, while the sport genre fans might complain about the different parts of the game where it falls slightly short. In terms of timespan that you will be able to play the game, well that all depends on the player. I have been enjoying making my way through the career mode and moving up the leagues. The real reward is when you grind out a narrow win using top notch defence. So all in all there is enough here to keep you entertained for a while, add another player and you can start creating some great overlaps and hitting those gaps.

Rugby 18 slightly missed out on the gold and get a Thumb Culture Silver Award with a score of 7 our of 10.