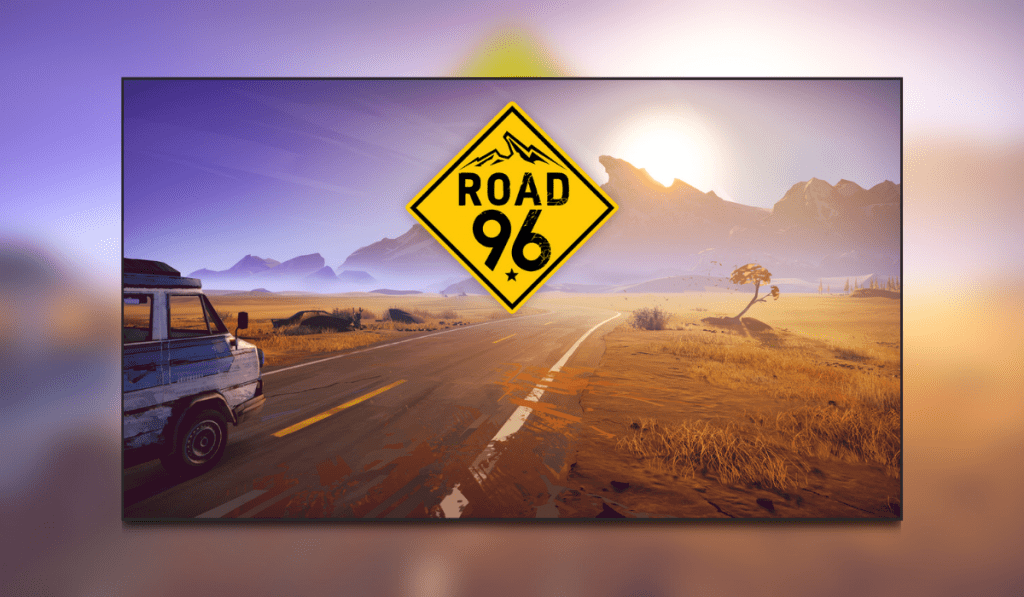 The world of rogue-like games is ever-expanding and evolving, but I’ve never seen the concept used quite like this. Road 96 takes procedural generation, unlockable upgrades, and the concept of multiple playthroughs, and adapts them to a narrative-heavy adventure game. It comes from developer Digixart whose previous games were Lost in Harmony and 11-11 Memories Retold.

With an authoritarian government in control of the country and the prospects of their future seeming bleaker and bleaker, teenagers are heading to the border in their droves. Can you help any of them make it past the border wall and security into a better country, a better life? While modern American political influences are seen in the game, the narrative was shaped from stories told by staff at 11 Bit Studios in Poland about their time living under the USSR rule and The Iron Curtain. There’s also some influence from North Korea’s regime thrown in. All of this helps to build an, unfortunately, believable and realistic world where you can sympathise with the need to escape.

Road 96 A Rogue-Like Never Before

We’re almost three-quarters of the way through the year and just 4 of the 19 games mentioned in my anticipated indie article are out so far. Hopefully, that means the remaining months are going to be packed! Has Road 96 been high on your wishlist? Once you’ve had a chance to play let me know how you found it by leaving a comment below the article.

When writing a review, I’m usually able to give a solid description of how a game will start. That’s not the case with Road 96. Each game will begin at a random location in the country and be somewhere within one of the 7 intertwined stories. You’ll be playing as a random teenager making their way toward the border wall looking for money, food, shelter, and assistance whilst avoiding the police and any supporters of Tyrak, the current authoritarian President of Petria.  One certain thing is that you will have access to limited money and health at the start of your journey, and you’ll be unable to perform certain actions.

Each playthrough of Road 96 is separated into episodes. Each episode is made up of several connected scenes that occur at different intervals between where you start in the country and the border. You’ll transition between these scenes in a variety of ways; either a choice you make when interacting with a character or by taking one of several methods of transportation. As you progress between these scenes and locations, you’ll edge closer to the border. Once there, you’ll need to find a way across, with numerous options and challenges presented. Your choices here will matter for the current playthrough and subsequent ones. I made a bad choice in one attempt and locked that option out for all my remaining episodes.

The scenes give you a chance to interact with the main characters and discover more about their stories. You’ll also learn more about the history of Petria, and about the upcoming election, where the story will ultimately conclude. Choices made throughout the game can have consequences for the short-term or long-term future. One way this is shown is via candidate polls on ‘The Sonya Show’ between each episode. The show also features a small flash-forward to election day that can show what might happen when you get to that date. Talking to the NPCs often presents the opportunity to ask what they feel about the country or election and allows you to show your support for Revolution, Voting, or Apathy. Anytime you make a choice that will affect the future, you get a notification in the top right corner and the screen will go a little fuzzy.

There are 6 skills you can unlock through interactions with characters that will give you advantages in certain circumstances. For example, you can obtain a lock-pick to open doors or get a lucky charm that increases your chances of succeeding ‘rolls’ you make by 15%. Rolls are made occasionally when you choose to act a certain way when presented with a choice. One I encountered was making a jump across a cliff. When you pick an option with a percentage of success, the game will sometimes tell you if you succeed or fail before continuing, but it will play out the result in high stakes scenarios without that prior confirmation!

A journey across a country as a runaway teenager is not an easy task. Your wallet and an energy bar add survival elements to the game. Managing these will be a constant background focus to be aware of. Finding cash and food lying around helps, but perhaps you’ll need to resort to stealing and begging too to get by. Buses and Taxis cost money to use, but walking everywhere puts a strain on your energy. You can find places to sleep rough along the roads, but this only restores a fraction of your health. A mixture of methods, and levels of morale, are required to make it all the way.

Road 96 features a mid-poly graphical style which took me a little time to get used to. I played on the Switch, initially in hand-held mode, which struggled slightly with the demand from the game. After about an hour of playing, I moved to docked and had a much better time, though there were still occasional frame drops. Given the scope of what Digixart has created here, and that they are a small team making a multi-platform release at launch, a few missed optimisations this early are entirely forgivable. I’m told there will be patches around and after release to help improve performance.

There are so many unique locations to be seen through Petria. It never felt like I was going to the same places with each of my characters. Of course, this was apart from some obvious and necessary exclusions; the border for instance. This variety makes the world feel vast and expansive and helps immerse you into the setting. I also loved the designs of the main characters. Each of them has a unique style that accurately portrays their personalities visually. The second you lay eyes on Jarod, you get a good read for his character. This is amplified greatly by the voice acting. Again, using Jarod as an example, his coarse, Clint Eastwood-like gruffness, when he speaks, adds volumes to his character and allows him to make an impression on you within seconds.

The soundtrack contains almost 30 tracks that cover a wide variety of genres. Some of these songs are included in a really cool way in-game. As you explore, you’ll find cassette tapes that you can collect and keep. Once obtained, these can be played in car stereos, hi-fi’s or walkmans through all your journies. A definite stand-out track for me is Keep Moving Forward by Toxic Avenger. It’s something I could definitely hear TWRP blasting out.

Usually, I give an estimate of the number of hours you’re likely to get out of a game. Road 96 is a little more difficult to accurately predict due to the nature of how the gameplay loop occurs and how much the story will appeal to you to replay and experience differently on multiple plays. I’d say a single playthrough is going to get you around 10 – 15 hours. Where you go from there is up to you, but there’s plenty more content left to explore at that point.

The episodic nature of play works really well for Switch. You can play for between 30 minutes to an hour and complete an episode. This will give you a natural stopping point to put the game down. Then you can come back to it for the next episode later. It also gives you the chance to reflect on your choices and the story elements you’ve uncovered so far.

I wish I could tell you more about the stories hidden within Road 96, about the characters and their backstories, and things I learned about them along my journey through Petria. However, all of that should be experienced first-hand. The order in which I experienced things will also differ from anyone else that plays given the procedural nature of the game. My next journey will be different too, but I look forward to seeing what that looks like. Road 96 tells some touching stories and gives each character enough depth that you can understand their motives and actions and sympathise with them, even if they act against you. The callbacks to your previous runs are subtle. But this helps make the world feel alive and lived in and adds weight to your decisions moving forward.