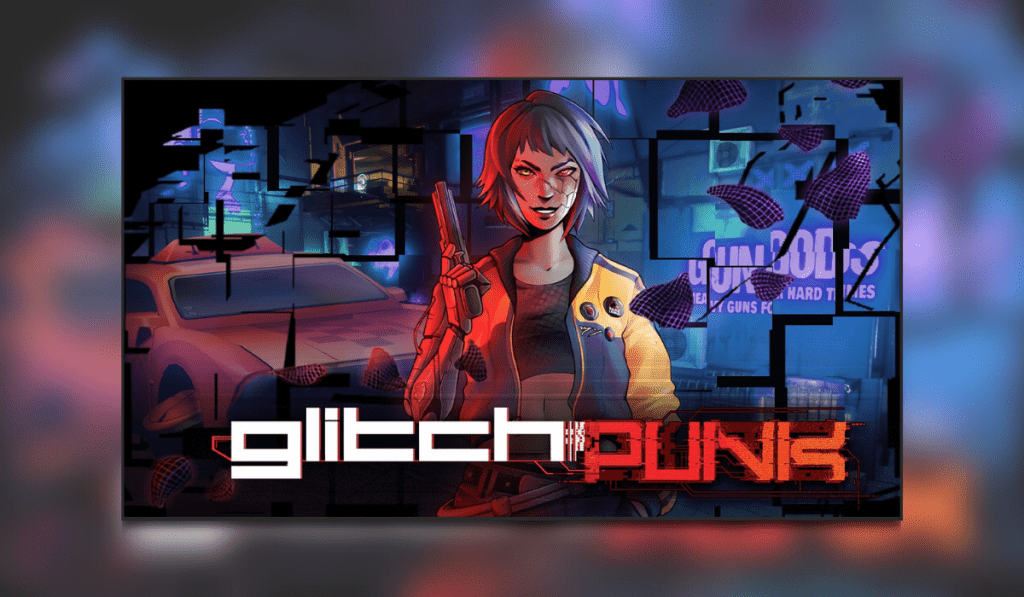 Welcome to my review of one of the latest games to hit Steam Early Access, Glitchpunk. It is brought to us by developers Dark Lord and publishers Daedalic Entertainment (Deponia, Unrailed!, State of Mind). The game is a top-down shooter/fighter akin to classics such as GTA 2 on the PlayStation. You play as an android bounty hunter earning a few bucks from doing missions for gangs just to get by.

Glitchpunk Takes Me Back To Those Classics

Whilst Glitchpunk certainly has a classic top-down vibe to it, can it really keep you entertained long enough to want you coming back for more? Let’s find out in my early access review. Check out my previous review here if you like this one.

Glitchpunk starts us off with a basic choice, which city to start on. This choice is very limited to one of four cities currently, this city is named New Baltia. Approximately three to four weeks after launch Dark Lord has said the second city will be available, which will be Outpost Texas. Further down the road of Early Access, the remaining two cities will be unlocked, Neo Tokyo and Moscow. The next choice is whether our bounty hunter android is a male or female.

Once we choose the city and gender, we’re teleported into the game. Now we can choose what our first mission will be. There are three gangs in New Baltia. Each has a mission to choose from. The game promises to have twelve separate gangs across all four cities. Each will have its own set of missions and views on the world. These will tell the game’s story and touch on sensitive subjects such as religion and xenophobia. One of the starter missions is quite basic and has you “kill three unlucky androids” as you can see in my below screenshots. You may notice this mission appears on all of my screenshots, that is because I kept dying and ended up just messing around in the city, causing carnage a little as Bill Williamson did. Kudos to you if you know who that is without Googling his name.

Be careful when you’re navigating to your missions, as you may end up injuring opposing gang members. This can reduce your standings with the gang which can lead to those gang members attacking you onsite in the streets. This is bad. Especially if you’re in the middle of a mission and you get killed. You start again from zero.

The combat is somewhat simple enough. However, the aim isn’t too good as when you shoot toward your target, you could have a bullet hit an innocent bystander, or worse, a gang member! If you have the game’s equivalent of a micro-UZI, then forget all feelings for those innocents. They will paint the path quicker than you can run to the toilet after a bad curry. It’s fun though. If you enjoyed just driving around whilst causing carnage on GTA or GTA 2 on the PlayStation then you will more than likely love this game and the throwback it will give you.

Being an android, you also have a hacking ability. Of course, you do. Why wouldn’t you? Anyway, this ability allows you to override various things such as the people in the city. Your android can cause someone to go into “overkill” mode which will just drive them crazy and make them attack anyone nearby. Useful for those hectic police shootouts.

Driving in Glitchpunk is quite hard, if you remember GTA 2 you’ll remember you had to be very careful when turning, else you’ll oversteer and career into a load of pedestrians on the walkway. Don’t turn enough, you’ll end up going into a wall in front of you, or more bystanders!

One annoying thing I found about driving, well, trying to, was the fact that to actually steal someone’s car takes a lot of effort at times. One example was I tried to stop a car and naturally, they run me down. One pixel of their car caught my android as I stood back up and it killed me. “Thanks then” was basically my reaction.

The graphics are a mixed bag for me. The lighting, design of New Baltia, the car designs, it’s good. But, yes there is a but, I am not too keen on the look of the humans and androids walking around the game. They look too pixelated in my opinion. I get what the devs are going for, but, I think I would prefer something a little cleaner.

The audio in Glitchpunk is pretty good. The radio stations are okay but could do with a little work. Sound effects in the game sound a bit run of the mill, unfortunately. They do fit the scenario of the game though, so that’s a bonus.

I can’t see this game lasting people too long, to be honest with you. The only people I can see enjoying this for a long time are those who played the original GTA games on the PlayStation. But then saying that I used to love those games. It’s a fun game for an hour or so here and there. But then when you come back to it you feel like you’re just starting it all from scratch again, with no real progress. Maybe once the other cities unlock this will be more entertaining and we will be able to feel a bit more variation in the game.

Glitchpunk has started off with a promising future ahead of it. Early Access is always a good step for a game, in my opinion. It allows the devs to build on the game whilst listening to the community to improve on the weaker areas.

As this is an early access review we don’t give awards, however, if I could in its current condition I would give Glitchpunk the Thumb Culture Bronze Award. Keep at it Dark Lord. You’ve got this!