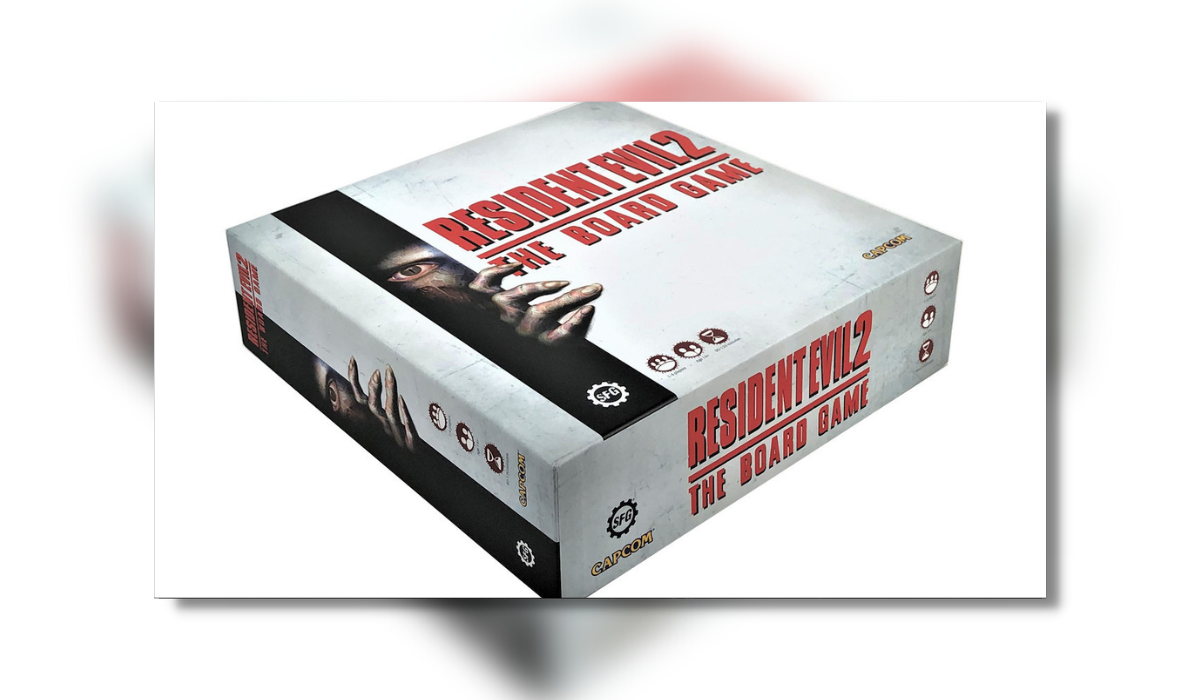 Resident Evil has been embedded into video gamers’ brains since 1997 and survival horror games took the world by storm. The franchise has gone through many changes over the years and it even created its own little universe with tons of spin-offs. It wasn’t long before there was an abundance of merchandise.

From action figures to card deck-building games and even clothing. One of the popular fan requests over the years was a board game based on video games. Well in 2019 fans got their wish and that’s the game we take a look at today. If you enjoy Resident Evil then why not check out our Resident Evil Village review here.

Straight away when you open the box you get an all too familiar message. ‘This game contains scenes of explicit violence and gore’ I love that and it’s a really nice touch which gets you already in the mood. The contents of the rest of the box can be a little overwhelming at first but it’s not as complicated as it first looks. It has over 20 tiles that make out the floor plans. Over 30 little pieces of cardboard make up the walls, doors, stairwell, typewriter and item boxes.

3D printed zombies, lickers, dogs and the main boss William Birkin. Then you have our protagonists Claire Redfield, Leon Kennedy, Ada Wong and Kendo. Yes, Kendo from Kendo’s Gun Shop is a playable character. I guess they couldn’t think of anyone else from Resident Evil 2 The Video Game. The set-up is actually really easy to do and will take you around 10 minutes with some scenarios taking longer or shorter to set up.

There are also various cards that contain weapons, first aid sprays, green herbs, red herbs, ammo and ink ribbons. The main cards will be Item A and Item B. Along with tension cards play a huge part in the game and add some RNG factor to it. After setting up the first scenario which is the first of 8. Each player gets 4 moves to do as they choose. Move 1 to 4 tiles, move a tile or 2 and use a weapon on an enemy.

Use an item or open and close doors. Once you use your 4 moves to do as you choose then once the last one is over you have to pick a card from the tension deck. This tension deck is a pile of cards that’s been shuffled and they add, well tension to the game. You could pick a green card where everything is fine or there are yellow ones that can be beneficial to either you or the enemy. There there are the red ones. These cards need to be avoided at all times. These cards can seriously mess you up and make you change your whole strategy.

Well, we haven’t mentioned the dice yet, have we? What’s a tabletop game without dice. Well, the dice that the game provides come into play in the later scenarios and add some more RNG to the whole game. What’s great about Resident Evil 2 The Board Game is that its 1 to 4 players. Yes, you can play this game solo if you wish but of course, it’s better with some friends.

Now, this is where the game drops down a few pegs from brilliant. The colour of the tiles that you layout for the different scenarios is just so dark. You can barely make out what’s on them. They represent the look of the famous settings from the game like the police station and Raccoon City itself. But they are just way too dark.

The walls and doors are also a huge letdown because they are literally just little pieces of cardboard that you lay down. It all takes out the whole gritty atmosphere that the Resident Evil games are known for. I appreciate that the designers wanted to give it a dark tone like the video games but they are too dark for my liking.

Luckily though that Resident Evil 2 The Board Game has a big fanbase and community so they have taken it upon themselves to make 3D printed doors, walls, staircases, item boxes and the rest that would other just be a piece of cardboard.

The manual says that a playthrough can take around 90 minutes. I personally think it is a lot longer than that, especially with all the setting up you have to do between scenarios.

If you are new to tabletop games like me then after reading the manual and setting up the first scenario. It took me easily 2 hours but I honestly didn’t mind. What I do like is the fact that no matter how many times you play the game. It will never be the same game twice. RNG plays a huge part in it so every game is going to be different.