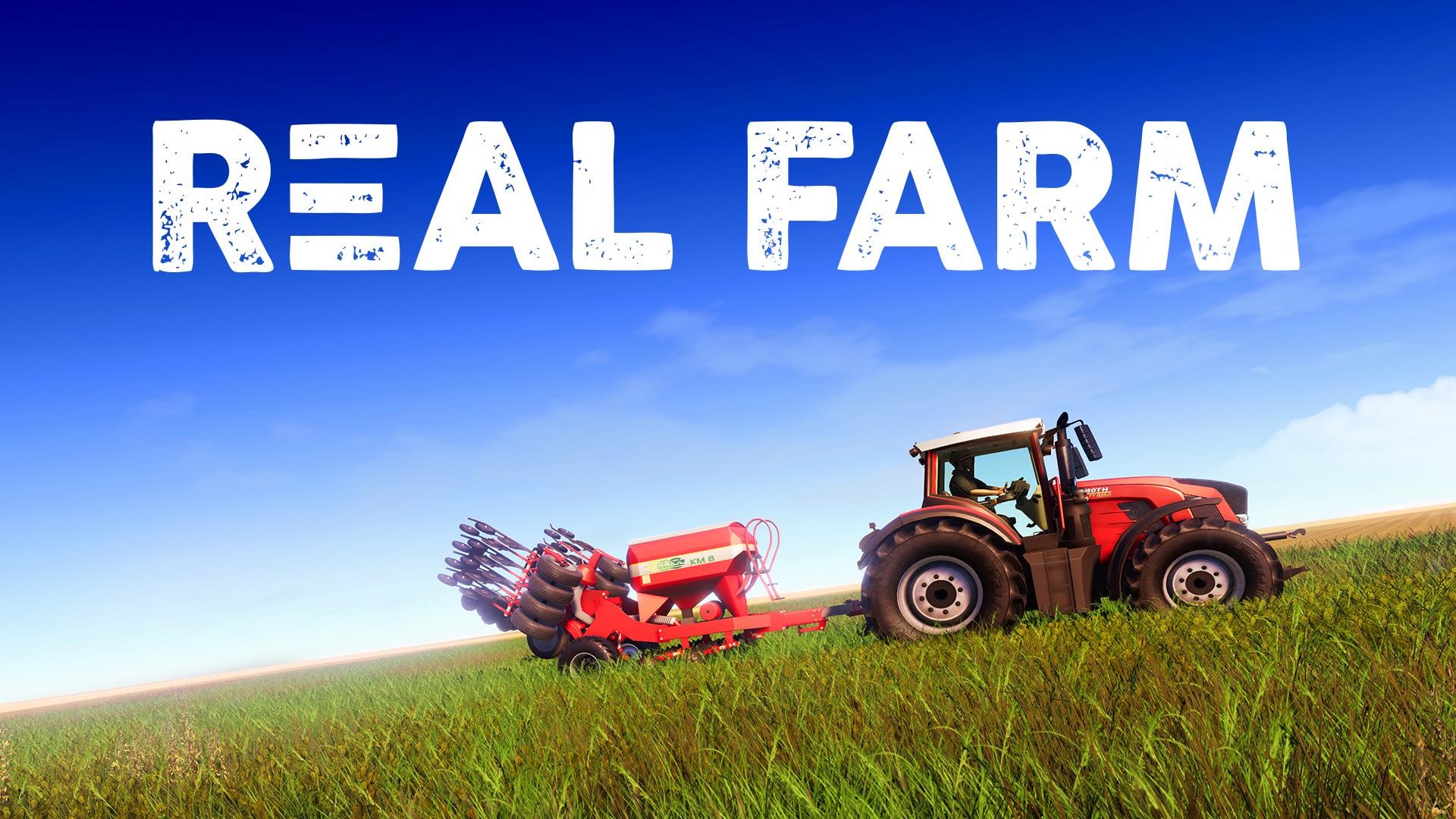 Real Farm by development studio Triangle Studios (Aerea, The Bug Catcher, Uphill Rush) and published by Soedesco (Tricky Towers, The Girl and the Robot), is the latest foray into the agricultural sim marketplace of, you’ve guessed it, farming!

With the farming sim world pretty much dominated by Giants Software’s Farming Simulator franchise, is there enough of a want for another simulator of this type?

Real Farm is set in America although in-game currency can be selected as either dollars or euros.  Having watched the trailer countless times prior to being given the chance to review the game, I couldn’t wait to explore the countryside in stunning 4k all the while bobbing about on my tractor.   From sowing crops, tending to livestock and then buying and selling using the real time economy, you can live the farming dream, well that’s the hope anyway before the likes of the supermarket giants come and screw you over.

I went with the career side of things and like most sims this began with a tutorial to slowly teach you the skills required to be a successful farmer.  Starting with a tractor you are plunged into a decent sized 4K world with various fields, depots and shops that you can visit to either earn or spend money.

Picking what task you would like to do from the job board allows you to select between various work that is currently available.  I chose to cultivate a field and immediately the mini map showed me the location of the cultivator attachment that I required and the field in question.  The game mechanics of driving the tractor along with the camera seemed a little clunky and at times frustrating with the turning circle of the tractor being one of my biggest issues.  I’m lucky enough to be married to a farmer’s daughter and I can say from experience that tractors can turn a lot easier than this!  With a press of a controller button a handy wheel appears that allows you to take over the more intricate controls of the vehicle that you are currently driving.  Examples of the controls are the ability to turn on and off vehicle working lights, raise and lower equipment and also alter the side it is deployed on.

Heading off to the field which is a brief drive away either across country or civilised via the traffic laden roads, you are prompted to lower the tractor equipment into the ground and start cultivating the field.  A timer begins, giving you around 45 minutes to complete the task and a progress bar slowly fills as you drive up and down the muddy field.  The job does not complete until you hit 100%.  Success in the task rewards you with money which you can spend on new machinery and later, the hire of workers to compete the jobs for you.

Happy with my initial progress I decided to go for a second job that required the use of a combine harvester.  Once more the locations appeared on the mini map and I walked to the yard to collect the harvester.  Walking upto the vehicle I could not for the life of me get the button trigger to appear for me to enter the vehicle.  I found this really annoying as this lasted a good five minutes whereby I repeatedly walked upto the vehicle and tried looking up at the driver’s door, the main cab, the ladder that hung down, the step, pretty much every area where I would think you may need to stand to enter the vehicle.  Eventually the prompt finally appeared but by then I was very close to putting the controller down.  Harvesting the field was pretty much the easiest bit of this challenge!!

With enough money to purchase my very own tractor it was off to the shop to see what I could afford, however disappointment was my first thought.  For me the drive to go out there and earn money within a game is the reward of later on purchasing a high end item.  In Farming Simulator there are a multitude of licensed branded vehicles, which as you progress, make the job a lot easier due to their size and speed however Real Farm offers only a handful of vehicles which although are fictional, didn’t really get me that enthusiastic.

The way that the world cycles through day and night is a great touch and makes good use of the working lights that are on your vehicle however a word of caution.  I foolishly undertook another cultivation job just before sunset that ended up with me trying to find the last 1% required to complete the task in darkness.  As much as I repeatedly drove my tractor up and down the field I could not find it to save my life.  This wasn’t helped with varying light renders that cast shadows across the field from nearby buildings and structures.  The shadows suddenly flashed about the screen as the camera altered, I found this very off-putting and once more frustrating.

One of the features that sets Real Farm apart from other similar sim games is the field management system.  Here you can look into the management of the field soil health and its quality.  Five factors appear as meters on each field, namely; plowing, cultivation, weeds, soil moisture and pests.  Depending on the meter level it is upto you to decide how you tackle the issue.  This could be via spreading water, pesticide, fertiliser or plowing and cultivating.  How you react ultimately affects the crop yield for that field.  I found this to actually add further realism into the game.

Real Farm does look pretty running in 4k , this is atleast one positive that I could pickup on.  The sway of the grassy fields and beautiful scenery has been well tended to by the animation artists.  I enjoyed roaming around the countryside and charging through the farmyard on my tractor.  Sadly the buildings are not destructible, as I found out while attempting to carry out a barn storm at 30mph, but then this isn’t Grand Theft Farm Simulator….Hmmm, idea for a game….  The daily cycles of the sunrise and sunset give a lovely glow across the land and glitches aside with regard to some of the shadows and shading, add to the realism of the working day.  Vehicle and animal rendering is fairly lifelike and is well detailed although I did find issues with trying to stand in the correct location of a vehicle to be able to enter it at times.

I found the country hill-billy banjo soundtrack to be fun at first however it got repetitive very quickly, thankfully there is an option to turn the music off.  In-game sounds such as engines starting, revving and equipment deploying are all very realistic.  Cows even go moo!

Real Farm attempts to muscle in to the niche farm game market and although it introduces some nice in-game mechanics such as the field management system, for me it does not compete.  The turning circles of the vehicles are cumbersome and a few of the game mechanics seems a little clunky at times.  This isn’t the most expensive farming simulator you can buy and for the money it is playable however if you are serious about getting your farming on then I would possibly pay a little more and upgrade to the latest offerings from the Farming Simulator franchise as you can’t really go wrong there. I award Real Farm a Thumb Culture silver award with 6/10