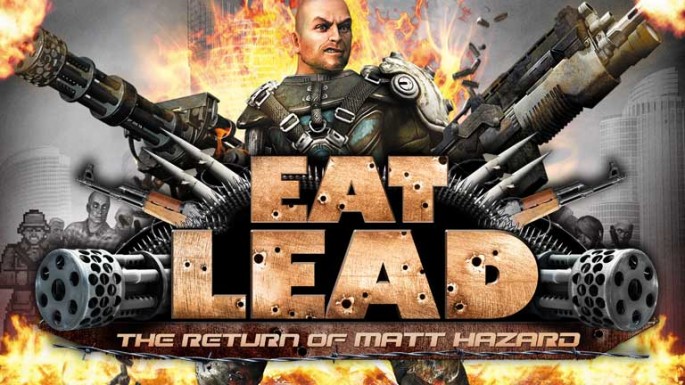 Something that has always interested me as a gamer and reviewer is looking back on the older console generations and picking up the games you may have missed the first time around. I’ve done it before and discovered some great games. Some great older games are now some of my all time favourites, with the likes of Mario Kart 64 and Metal Slug 3 being members of that list. Other times though you do have to admit that the older games you missed out on really aren’t worth it. It really doesn’t help that I often go out of my way to buy a terrible game.

Parody and comedic games are something I find very interesting indeed. Oddly terrible games have become a genuine interest of mine. The incredibly dull Duke Nukem Forever was definitely on the right wavelength but it’s just so bad I barely made it to the end. No, what I needed was a sort of watered down version of an already old franchise. Something that wouldn’t push the boat out, nor would it in fact do anything so terribly horrible to me. In comes Eat Lead: The Return of Matt Hazard, the visual embodiment of the word “mediocre”, available on Xbox 360 and PS3.

Will Arnett plays Matt Hazard, a video game hero that has to save himself from becoming the next washed up video game character of the past. When his new game was supposed to kill him off in the first level, it’s up to him to make it to the end of the game and figure out who is behind his supposed murder. It’s actually a pretty cool concept and one of the few positives in regard to this game. I’m all for creative and unique plots and this is most certainly one of them. It takes us through the world of gaming, the tropes are spotted, but they also decided to include the glitches we hate as well.

As far as gameplay goes it is really nothing special or creative. There’s usually a unique selling point to new IPs like this but there is a definite lack of one throughout this game. Maybe they thought Will Arnett and the voice cast alone was enough to create a popular game? You move from level to level, and by that I mean of course from cover to cover. There’s something so terrible about this cover system though that it genuinely annoys me. It’s not that it’s not responsive or anything in that regard, but it’s just the fact that it’s there in the first place if I’m honest.

If anything, the humour of this game can in fact be it’s one and only salvageable point. Now I have to admit it’s certainly not the best humour, but given what we’re working with right now anything could be funny at this rate. What I was expecting was a lot of jokes about how the shift of videogames has left this character washed up. I did not expect that the jokes would just be in fact either cheap one liners that didn’t make sense or just characters within the game. To be fair the game does boast a pretty strong voice cast, with the likes of Will Arnett and Neil Patrick Harris being included in the game.

As far as graphics are concerned, Eat Lead: The Return of Matt Hazard fits nicely into the slot of mediocre once again. Nothing is eye popping or interesting to look at, nor is it offensively bad to look at. It fits the middle ground image all too well. You’ll shoot your way through generic corridor after generic corridor. Yes, it does definitely begin to bore. Even when the game tries to throw in something new and unique it can’t even do anything of cognitive use with them. There’s one part of this game where you have to infiltrate a missile silo and it’s a sort of boss fight but not really because you’re not exactly told what to do. After blind firing my way through that bit, the mission ended and I sort of just had to take a few days break from this game.

I never take breaks from games that often. Look at me, I’m a recluse with the social confidence of a vegetable. Anyways, I did in fact have to take a break from this game, simply because of how mundane it was. It was more mundane than my life and that is really saying something. The general tone, plot and action of this game just screamed mediocrity and it could never amount to anything more than that. More specifically you could see this in the sound effects if anything else. An odd choice to see mediocre aspects of the game, but believe me, it’s where you’ll hear it the most. Aside from Will Arnett’s vaguely funny quips, there’s nothing more to be interested in within this game.

Look, this game is a shooter, so that should, by definition, mean that the actual shooting of the game is actually quite good. You’d be wrong there, so very, very wrong. Honestly as far as shooters go Eat Lead: The Return of Matt Hazard may be one of the worst of all. Aiming and actually hitting a target is about as likely as hitting a strike in football. By this I mean it’s genuinely impossible without the right equipment. I wouldn’t recommend using any weapon other than the Hazard Pistol or even the SMG you get in the first level. Other than those two weapons your chances of hitting a target are ten to one at best.

It’s no help that the melee combat is as shoddy as you’d expect. There is an achievement tied to killing twenty enemies with one hit. To this date I still have no idea how exactly you do that. I’ve tried it, all I’ve been able to do is smash the enemies over the head with an oddly sized pistol. Still at least like most parts of Eat Lead: The Return of Matt Hazard the melee combat does actually function. I think it’s bad that I’m basing my review of this game on whether or not it can actually function. Its games like this that annoy me though, the ones that aren’t in fact broken but you can’t say you’re having a good time either. A game that will be left in obscurity until people like me come along and dig it up ten years down the line that is.

However, one part of Eat Lead: The Return of Matt Hazard I do in fact like is the achievements that I mentioned in my previous paragraph. One of the achievements is to literally sit and watch the credits. Another is for pausing the game. Achievements like this are great for Gamerscore hunters like myself, if you’re looking for a quick bit of Gamerscore then the first five minutes of this game should suffice. Unfortunately if you’re looking for an actual video game experience I would most definitely give this game a skip.

But I’m not like you. I play terrible games and for some weird reason I do in fact enjoy them. Hell, I once gave Hannah Montana: The Movie a solid 5/10. Still, if you’re anything like me then you might get some vague enjoyment out of this title. Hell, I have to admit I did in fact have a little bit of fun for the first few hours. It’s only when you get to the later stages of the game that the frustration begins to take over and you have much less fun than should be expected.