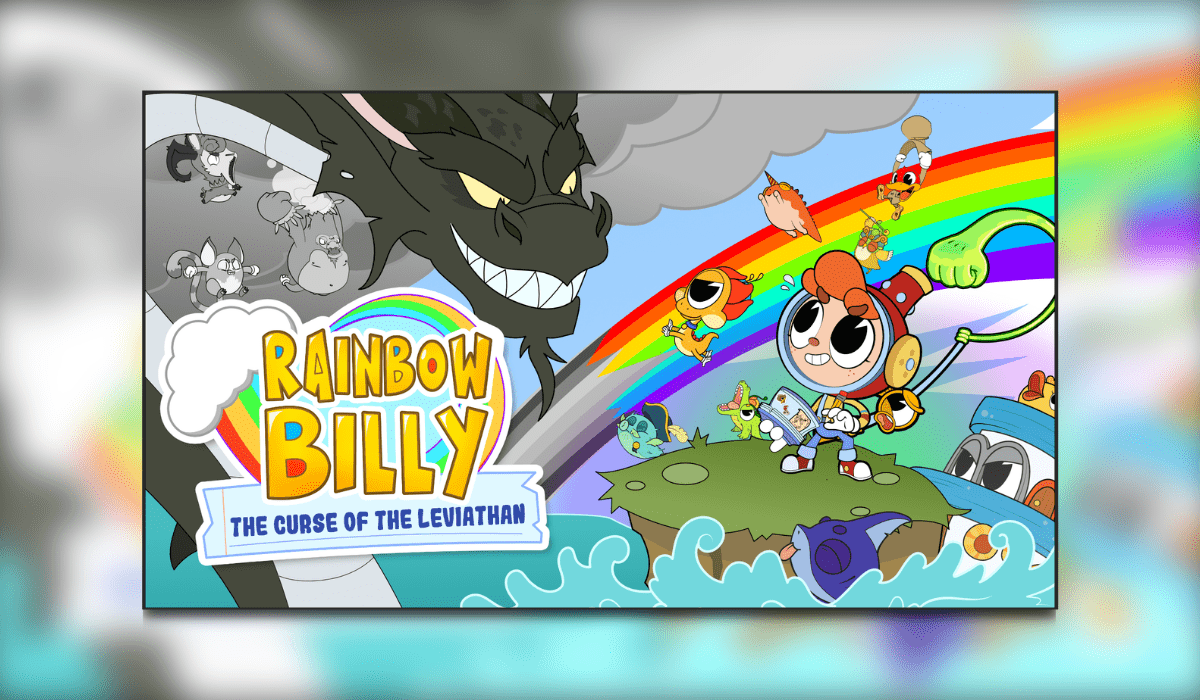 Rainbow Billy is a colourful, wholesome, fun-packed game developed by ManaVoid Entertainment. It was originally a Kickstarter project back in May 2018 but has since won Ubisoft Indie Series Grand Prize and received funding from the Canada Media Fund. Looking back at the Kickstarter after having played the game it’s easy to see where the extra time and funding have been used to improve the initial showing.

The World of Imagination has fallen under a curse, cast by the monochromatic, evil Leviathan. The Leviathan is determined to make Billy and the rest of the world abandon their hopes and joys in favour of accepting a bleak reality. It’s up to Billy, and their friends, to travel around the world, cheer everyone up and restore the colour.

Rainbow Billy: The Curse of the Leviathan – In A World Full of Clouds, Be a Rainbow

Rainbow Billy first caught my attention during the Wholesome Direct before E3 2021 and it made my highlights list. Check out that link, you might find a new game to check out or keep an eye on for release in the near future.

In Rainbow Billy, you play as the titular hero Billy. Equipped with a trusty, talking fishing rod and accompanied by their pet dog, they’ll travel from island to island aboard their boat, Friend-Ship. Billy’s quest is to obtain the 3 colour cores and use them to defeat the Leviathan. Along the way, they’ll encounter creatures who are overcome with ‘negative’ emotions. I put negative in quotes because I’m not sure that all the characters should have their issues entirely classified as negative, or that they need ‘fixing’ per sé. By talking to these creatures in ‘confrontations’, Billy will be able to help them with their issues and recruit them to help on the journey. The more friends recruited, the more choice Billy will have in future confrontations.

There’s a number of gameplay systems in Rainbow Billy. The main one is the aforementioned confrontations. These play out like turn-based battles in traditional RPGs, but without the violence. Instead, Billy and their team will talk to their opponent to assist them with whatever emotional problem they are dealing with. This will help to reveal their colour components, which can be recoloured using the creatures Billy has recruited. Each friend on Billy’s team has access to up to 3 symbols.

Once you’ve selected all the creature tokens you want to use in the round, you’ll have to complete a number of mini-games to determine the success of your ‘attack’. If the symbols you’ve used match the symbols of the opponent, they will become coloured. Once all symbols are coloured, the confrontation is won. It sounds like a lot, but it’s a really enjoyable system. Upgrades allow for more creatures per round or more creature tokens in your hand at any one time. The battles are kept fresh as the game progresses with the introduction of clever twists on the formula.

The world is also littered with puzzles that Billy will need to solve to advance. These take a few different forms and again, always seem to be fresh and exciting rather than becoming predictable or boring. They’re also not overly troublesome to overcome, maintaining a good sense of progression and a feeling of fun. Rainbow Billy strikes a wonderful balance between engagement and difficulty where it never falls too far towards being unchallenging or impossible. The mini-games can become frantic as you progress towards the end-game, but if you do have trouble with the reaction speeds you can adjust the difficulty in the options menu.

The aesthetic of Rainbow Billy is based on modern cartoons. When I first saw the trailer I said it looked like someone threw a Dulux factory at Cuphead. I think that sums it up pretty succinctly. Character sprites are 2D, whilst the environments are 3D which is a style that is becoming more and more popular among indie games. There are also a few 2D animated cut-scenes that serve to progress the story. One thing that took a bit of getting used to is the fixed camera when on land. I kept wanting to spin the view around so I could see where I was going but you’re at the mercy of the angle you’re given. In fairness, this is done to allow secrets to be hidden and to control your view of puzzles, so I’m willing to forgive the design choice.

The developers have also added a number of accessibility options, including a font for dyslexic players. Also among them are difficulty settings for both the general game and for the mini-games. The latter is specifically important because late in the game these can become very fast and frantic. One thing that seems missing is something for colour blind players. In the third world, there are a couple of puzzles that require the combination of colours to proceed. I imagine this could be tricky or maybe impossible for some players. That being said, I always love when accessibility considerations are made so appreciate the options that have been included.

The soundtrack is very fitting for the general look and feel of the setting. One particular song at the end of the second section is a real ear-worm. This could possibly be because it has lyrics which, is a big change up to that point. Another element that stood out was the sound effects. Upon making a new friend, levelling up or finding a secret (among other things) there’s always a cheerful jingle that plays. It didn’t quite give me the dopamine hit that the trophy noises do on Playstation, but it was certainly close.

I’m not sure what I was expecting from the game before playing but it’s certainly longer than I anticipated. If you’re casually playing through the story, I imagine 10-15 hours is what it would take on average. There’s likely to be a clean up of collectables and/or achievements after that point too.

I knew immediately upon seeing Rainbow Billy that I would have to play it. I’ve struggled to put it down. The experience has been an absolute joy and I can’t wait for more. It’s a game that has packed its world with unique characters, all with their own personalities without ever feeling shallow or padded. There’s also plenty to do and collect without it being an overwhelming or seemingly insurmountable challenge. I’m giving Rainbow Billy: The Curse of the Leviathan a Thumb Culture Platinum Award.