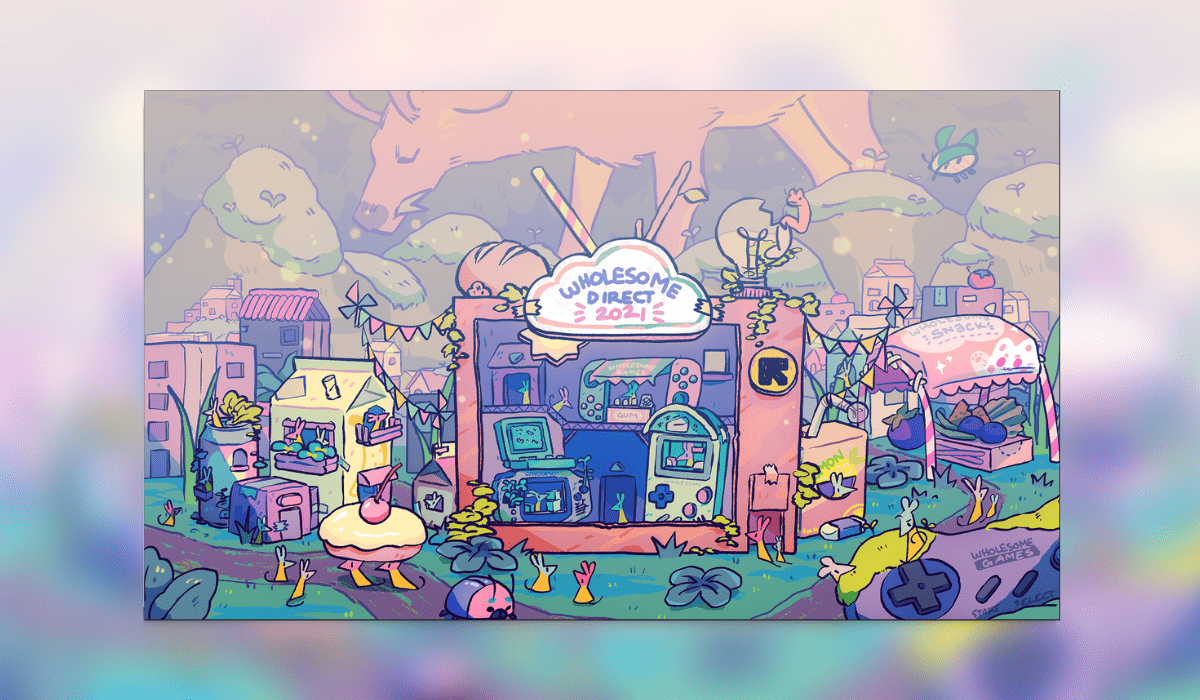 Wholesome Direct is a non-profit showcase run by Wholesome Games where volunteers curate games that they find to be particularly positive, thoughtful, uplifting, or cozy. I look forward to these showcases the most each time they are announced and this year’s E3 presentation was no different. 75 games in total were shown in some way and I’ve picked out 10 of them below to give you the trailer and a brief description. Many more of the games deserve attention though, so make sure you stop by the Wholesome Direct website for a full run down and links to each game.

Social Anxiety Simulator, sorry I mean Bird Problems, opened the show this year and immediately resonated with me. I have definitely felt the anxiety of talking to strangers or making phone calls in the past. This game looks like it’s going to be a comedic story of a small bird attempting to overcome those feelings and make some friends. I expect this one to be short but charming when it comes out.

Taking hand-painted visuals to the next level by actually painting everything on paper before it is used in the game, Dordogne looks sensational. Play as 32-year-old Mimi as she rediscovers memories of summers spent with her grandma by reading letters and solving puzzles. As you progress through the game you will fill Mimi’s journal and help her to once again view the world through the eyes of a young girl that marvels at everything.

The city is on fire, police patrol the streets and Maya is trying to reach her boyfriend Devin’s flat. Fire Tonight will tell the story about a relationship and the couple striving to be together despite the circumstances keeping them apart. I love the deep blue and purple aesthetic and the mechanic of having a fixed isometric camera but rotating the environment to uncover new paths and secrets.

What, on the surface, looks like a really cute turn-based deck-building strategy game is also set to deliver a rich story about coming of age, moving out of your parent’s home, and possibly saving the world. Floppy Knights sounds like it has so much to offer in both mechanics and narrative. If you’re a fan of Adventure Time or Steven Universe be sure to add this to your wishlist.

Based on true stories from AAA development staff, Game Director Story will take you behind the curtain of big-budget game development; warts and all. Though tough topics and scenarios will be covered, a humorous and satirical tone will help make these more palatable to play through. Your decisions will affect the games your team is creating aswell as the team members themselves. The demo is currently available on Steam.

Join Meredith Weiss as she takes a break from her big-city job to deliver mail in her quiet, rural hometown. Take Meredith on a journey through the lakeside town both on and off the job and make your own choices to guide the branching narrative. What will you choose for her at the end of the 2 weeks? Going back to the city or staying in this peaceful get-away? Lake is set to release at the start of September on Steam and Xbox.

Use words from letters and messages to solve riddles and transform yourself and the world around you. Both the aesthetic and mechanics shown off in the trailer for Letters look delightful. The game promises a branching story experience that can deliver different content on multiple playthroughs. Who will Sarah grow up to be in your story? You can find out on Steam and Nintendo Switch later this year.

Ever since The Sims became a way to extract hundreds of pounds from wallets for minimal content bundles I’ve been waiting for a competitor to come along. Enter ParaLives. The level of customisation shown off in the E3 trailer instantly blew me away. If the developers can pull off adding in the life simulation mechanics successfully, this will be a real, solid alternative to EA’s game. Development is still in the early stages but make sure you follow along if this game excites you.

Rainbow Billy: The Curse of the Leviathan

Look at how vibrant this game is. It’s like someone threw a Dulux factory at Cuphead. Journey through the World of Imagination and help the residents rediscover their true colours through platforming puzzles and non-violent encounters. Rainbow Billy: The Curse of the Leviathan is a joy to look at and will hopefully be even more fun to play. It has a fishing mini-game and yes, you can pet the dog!

A game featuring bugs (no, not the Bethesda kind) and a purple heavy colour palette? Sign me up. Tracks of Thought is a deck-building, narrative puzzle game about self-exploration and conflict resolution. Talk to the other passengers on the train, help them and learn more about the mysterious destination you are headed for.  Your deck of cards will be affected by your personality and you will therefore find some conversations easier than others. Can you adapt to each situation successfully? A demo is currently available for a few days until June 18th.

A total of 75 games were shown so I’ve barely scratched the surface here with my 10 highlights. A Little to the Left, Venba, Moonglow Bay, Woodo and Toodee and Topdee are just a couple of the other games that caught my eye. Powerwash Simulator was also shown, which Dan covered for a preview here. Be sure to check out the Wholesome Direct website for more details on all these games and many more.