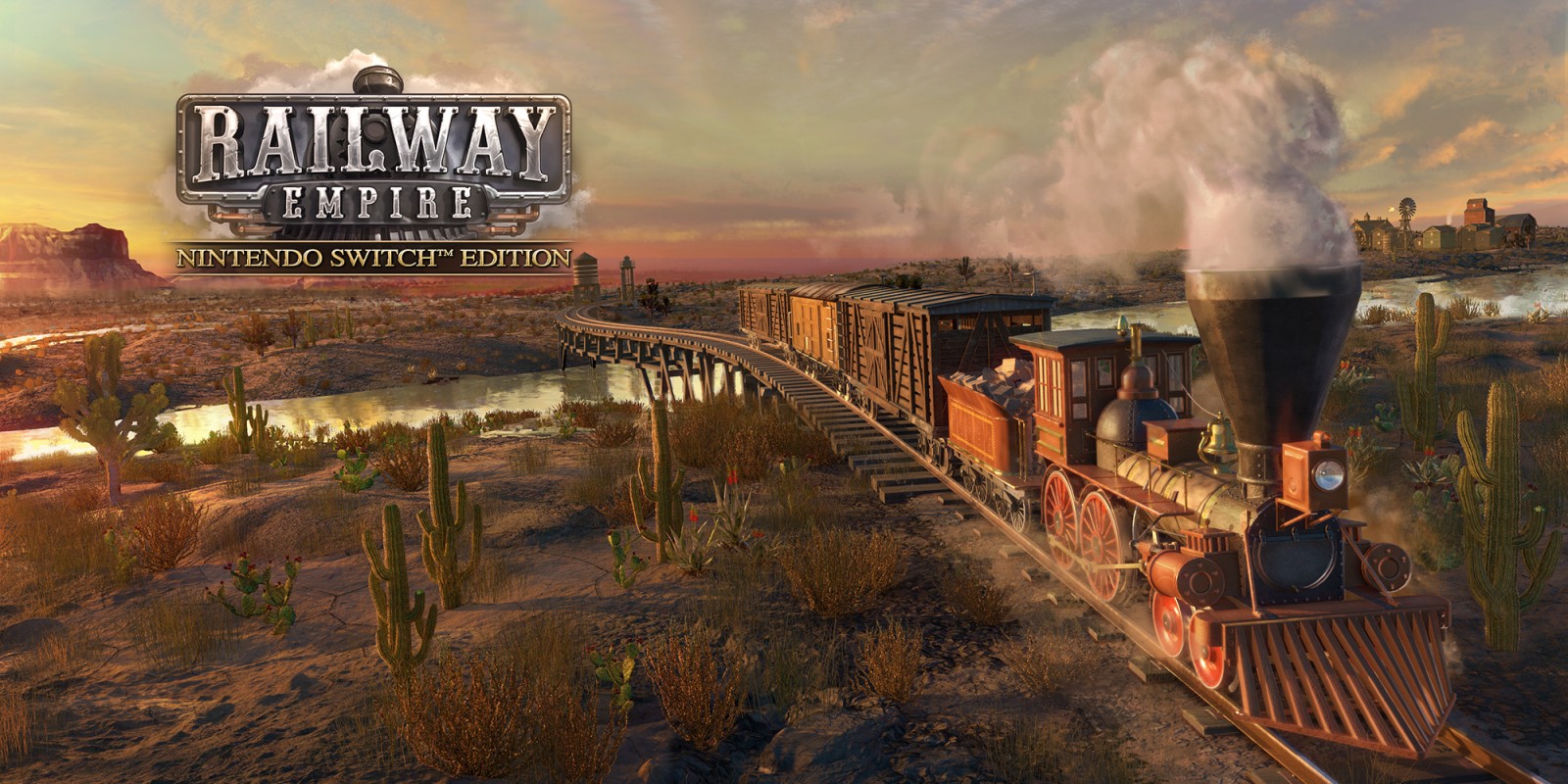 Toot toot!  For the last few weeks, I have been testing my haulage skills on Gaming Minds Studios and Independent Arts’ strategy tycoon game Railway Empire, out on the Nintendo Switch today!  With great memories of Transport Tycoon flooding back to me, how was this railway escapade going to play out, especially without a mouse in sight!

Set in 1830’s United States you enter the playing field at one of the most exciting times in Railway history.  If you want to earn big then you need to think fast, build intuitively and get those trains on the rails before a rival does.

On the face of it, a train tycoon sim may not float your boat as it were but I was pleasantly surprised with how energetic the intro scenes were and also how well the tutorials guided you at the very start.  The aim of the game is simple, build the biggest and most profitable railway company you can.

The basics are relatively simple, a city has a certain industry which it requires resources to aid manufacture, you find the nearest resource, build a station at each of them and connect them with a track, add a train and boom you are away!

The excitement begins when rivals start to build their tracks and stations nearby in a bid to supply the cities with the much-needed materials.  As things progress you will find that you will be expanding stations by adding more tracks as well as more trains which then requires signalling, sidings and an understanding of how they work, which is brilliantly taught to you early on.

A lot of planning goes into each track layout as you find the cost of construction depends on the type of terrain you are on.  For example, rather than go in a straight line from station to station creating lots of tunnels and bridges, you may find by putting a simple curve in the track you can stay on flatter land and negate the requirement for expensive groundwork and structures.

Playing on the Switch Lite the controls actually worked remarkably well.  Having only played these type of games in the past using a mouse I was a little dubious how easy it would be to construct and interrogate objects.

Railway Empire goes much further in-depth than I was expecting.  There is a research screen that allows you to spend innovation points unlocking upgrades for your stations, trains, carriages and personnel so that you can make them more efficient, as well as unlock entirely new train stock that are better suited for either freight or passengers for instance.  There are over 300 technologies to acquire!

Shares can be bought in industries, helpful if you are setting up railway lines to feed that particular field, giving you some extra income later when you sell high.  Shares can also be bought in rival’s companies that can eventually be used to take over their company.

You have full control of hiring personnel for your rolling stock however they do seem to argue with each other if you put them on the same train!  There is defiantly a bit of chemistry work to be done there.  If you want to go further you can hire other key personnel to work in the office to boost cash flow or even send them to go and sabotage a rival’s train or infiltrate them for research.  It is certainly a shady affair!

Lastly, the industries present within each city can be bought as well as the resource places that you are connecting to such as farms, quarries, lumber yards etc, maximising profits.  Auctions happen occasionally and you have to be ruthless and bid high to secure the win and take it away from your rival.

Railway Empire features a campaign across America as well as additional content in Mexico, The Great Lakes and the Andes.  You can choose to challenge yourself on the various scenarios or there is a free mode and a sandbox mode to have a chilled play with if you want to play at your own speed.  With over 40 historically accurate locomotives and more than 30 different wagons that can be unlocked during the game, it is up to you to learn when to use each type.  If all of that content is not enough then there will be extra DLC available to purchase that covers Germany, France, Great Britain and Ireland.

The title and subsequent screens are very well detailed and look good on the 720p screen of the Nintendo Lite.  As you go into your game you are greeted by a large expanse of America, complete with small up-and-coming towns, thriving woodland and rolling hills. Using the thumbsticks allows you to explore by rotating and zooming the camera right into the action.  There is a slight stutter when you first enter the game, probably content generating, however, this disappears in a matter of seconds.  What you are left with is large gameplay map teeming with life and some snazzy close-ups of your amazing mechanical marvels.

I enjoyed the soundtrack in Railway Empire.  It has a real American 19th-century charm to it and helps set the atmosphere of the game.  The sound effects of trains departing and arriving at stations gives you a thrill as you see your planning and hard work coming to fruition.  The rival companies each have their own unique characters that come and go throughout the game, keeping you on your toes as they taunt you.

Railway Empire is one of these games that you can start and really get addicted to in long sessions at a time.  I spent countless evenings playing until the Switch warned me that the battery was about to run out.  Each scenario and campaign mission can take many hours of battling to come out on top.

Railway Empire is an amazing tycoon game that really makes you think before taking action, and rewards you accordingly for it.  In a bizarre way, it almost has elements of Settlers.  There is a real sense of adventure when playing the campaign missions and slowly advancing through the history of the industrial wonders of the railway world.  The rivalry that you come up against forces you to look around and create those lines between resource and factory where none have existed.  First come, first served, why not buy the business and make even more money?!