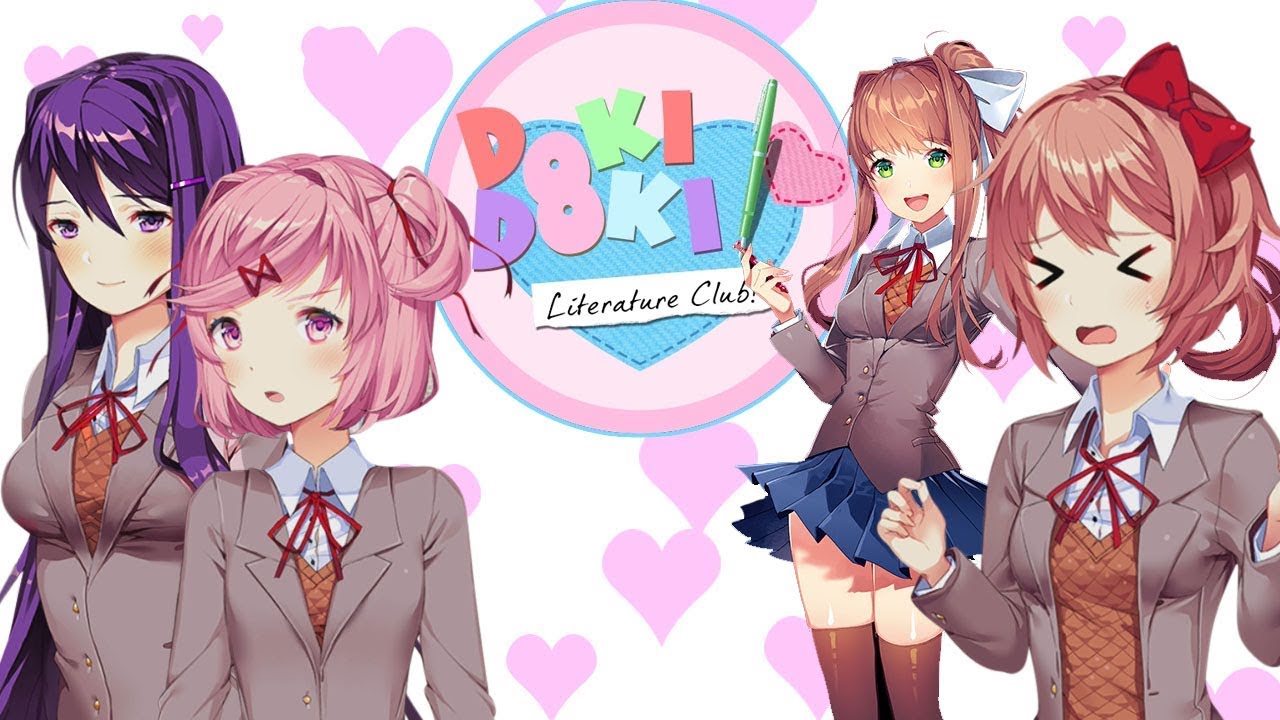 Doki Doki Literature Club! is a 2017 game developed in America by Team Salvato. It’s a free game that acts as a visual novel where certain decisions can be made along the way to change the direction of the narrative. The game involves talking to and getting to know four girls who are active in their high school’s literature club. This game is all about these characters but there is more under the surface and some interesting twists and turns along the way; you’ll certainly start to suspect early on that the happy, colourful anime façade hides a darker secret.

It’s important to note at this stage that the game does present you with a disclaimer; “This game is not suitable for children or those who are easily disturbed.” This should be your first clue that the pink and purple accented anime exterior is actually the antithesis of the themes it wants to explore. Whilst it presents itself as a joyful & cute novel and dating-sim, what you’ll actually find is more akin to psychological horror.

Doki Doki Literature Club!’s Entire premise is based on a faceless protagonist invited to the literature club at their high school. It becomes clear that joining a club is a crucial part of getting the relevant credit for the school year and you begrudgingly join your childhood friend to see what it’s all about.

At this stage you’re introduced to the four main characters of the game and the members of the literature club;
Monika the smiley president of the club.
Sayori the vice-president (and the aforementioned childhood sweetheart).
Yuri the shy and quiet type who finds more comfort in books than the people around her.
Natsuki the headstrong youngster of the group who reads manga and shares her love of baking cupcakes.

You could open up the age-old debate around “what qualifies as a game?” whenever a walking sim or visual novel crops up; we won’t be doing that here, however, I would be remiss to not acknowledge what you can do in the game.

Ultimately 90% of Doki Doki Literature Club! is clicking through the dialogue to learn about the characters, their interests and what makes them tick. The principle here is that it is a novel or manga, just like the genre suggests; however, the other 10% of the game includes some basic decision making that can affect the story and some more intriguing and very original elements that I won’t be going into in this review.

If you find yourself needing more stimulus than a story from your games then I can already tell you that this game isn’t for you. If however, you’re keen to see some very well fleshed out characters and a story that is tailored to your decisions then you can quickly find yourself lost in the world it presents; it also won’t take very long for you to start to see the cracks forming that will really encourage you to dig a little deeper.

Where Doki Doki Literature Club! excels is in the narrative it weaves; it manages to skirt the line between cliché and absolutely mind-blowing to give you a truly brilliant story with some satisfying gameplay elements cropping up along the way.

Ultimately Doki Doki Literature Club! is presented as an anime or manga; very little in the way of animation but with a gorgeous stylised presentation. As the story progresses and things unwind you do see a lot more of what the developers can offer and I look forward to seeing what they do next. Interestingly the main menu becomes an analogue of your progress through the story also and almost becomes a key part of what is happening.

If you’re an anime fan then you’ve likely seen the tropes used in Doki Doki Literature Club!’s visuals a million times before, but the consistency throughout the game and the changes in direction in the final act of the game make for some intriguing visuals.

Whilst you may feel like you’re looking at the same scenes over and over again you’ll begin to pick up on some contextual background storytelling along the way which really does start to get your mind wandering as the darker themes start to get explored.

Barring a few sound effects scattered throughout the story, the main audio you’ll get from Doki Doki Literature Club! is the music. The music has some surprising presence throughout to help set the tone of the scene unfolding in front of you and at key moments can even turn to utter silence which is almost as strong as the music itself when used at the right time.

These musical beats can quickly change your attitude towards a scene; from happy and charming straight into tension. Interestingly there are a few subtle variations of the main theme that manage to put you on edge or lure you into a false sense of security.

Surprisingly Doki Doki Literature Club! is a lengthy game clocking in at around 4 to 5 hours; however, as you’ll note above there are decisions that can be made and a fundamentally different story can unfold depending on who you get to know and what decisions you make throughout the story. This means technically you can replay the game a few times to see all the different avenues; though subsequent playthroughs are likely to make more use of the skip function as you become familiar with the beats of the story.

Doki Doki Literature Club! is not for everyone, in fact, you’ll probably already know if the game is for you just from visiting the store page. However, I will say that scratching a little bit beneath the surface and exploring the story has actually been surprisingly rewarding and has left me wondering about all the different themes it explored.

Thankfully due to the very respectable price point of being free, it’s something that everyone can at least give a go-to and hopefully persevere with to see how they react as the story unfolds. Doki Doki Literature Club! earns the Thumb Culture Gold Award for the stylised visuals and engaging story; whilst the game may not be your cup of tea don’t be afraid to give it a try.