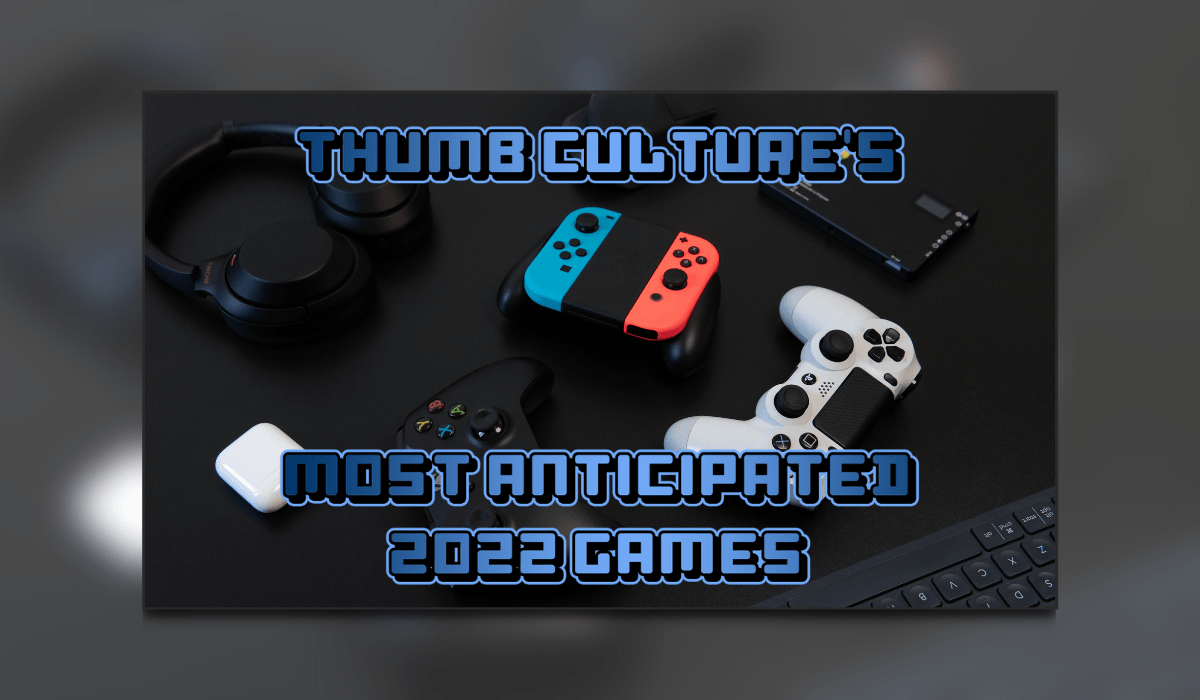 2021 has been a great year for video games. We’ve had It Takes Two, Forza Horizon 5 and Chicory: A Colorful Tale just to name a few. The year has however seen a huge number of delays announced. The majority of those are pushing release dates out of this year and into 2022. The first quarter of next year is absolutely fit to burst with big releases. So much so that I’d expect at least a couple to ‘blink’ and push back further into the year. With so many great-looking projects listed for the next 12 months, we thought we’d share our most anticipated 2022 games with you.

Games We Are Most Excited For In 2022

What’s on your various platform wishlists for next year? Let us know in the comments below or check out the links to our social media platforms at the bottom of this post and get in touch with us there.

Stray is a platforming puzzle game based in a futuristic cyberpunk-inspired world where you play as a cat. Parkour your way around an almost derelict, abandoned city inhabited by humanoid robots, as you search for a way home. Alongside the robots, you’ll also encounter much less friendly creatures, Zurks. The small, leech-like creatures, somewhat reminiscent of Half-life’s Headcrabs will be a danger to avoid.

This game is being developed by BlueTwelve and published by Annapurna Interactive, so I’m expecting a high-quality outing. From what I’ve seen so far, the game looks great, with fast-paced chase sections, physics-based environmental puzzles and lots of exploration and interactions. It’s slated for an early 2022 release, but as mentioned above, so are a lot of games currently so don’t bank on a Q1 date.

Hollow Knight: Silksong is easily my second most anticipated game of all time, behind FF7R. I can not wait to see how Team Cherry has refined the formula from their fantastic first Metroidvania outing.  Information is sparse, with the last official word from the developers coming via Edge Magazine in January 2021. Based on what info has been released, and bolstered with rife speculation, Silksong is imagined to be bigger than Hollow Knight, which is no small feat.

We do know that quests have been added for this game, bringing a more structured approach perhaps. Hornet will also have different equipment load-outs, which could see even more customisation than Hollow Knight’s charm system. With no set release date, the current best guesses are for February, though it could be later in the year. Maybe we’ll see something at December 9th’s Game Awards show?

There are a few games I am looking forward to in 2022. Stray, Horizon: Forbidden West, God of War: Ragnorök, Ghostwire Tokyo, Gollum, LEGO Star Wars: The Skywalker Saga to name but a few. But if there was one game I have to own that releases next year, it has to be Gran Turismo 7. After seeing the trailer in 2020 I just knew this had to be better than GT Sport, which was by no means a bad game but it was missing a lot for me.

Seeing the menu in the upcoming game gave me huge Gran Turismo 4 vibes which has so far, been my favourite in the series. As well as a single-player campaign, we are seeing the return of a whole host of classic features such as the Driving School, Tuning Shop and one of my favourites, the Used Car Dealership.

I am really looking forward to how this game will look and feel on the PlayStation 5 with DualSense’s haptic feedback and real-time ray tracing, not just in photo mode like other racers out there. Graphical fidelity has been a strong point for the series since the start, and if it plays as good as it looks, then it will be straight to the number one spot on the podium.

I absolutely loved God of War (2018), everything about it was absolutely incredible. The setting, the story, the graphics, and of course the gameplay. I am very excited for God of War Ragnarök on the PS5, I can’t wait to see what Santa Monica Studio pull out of the bag with the power of the PS5 and the functionality of the DualSense controller.

Being a huge fan of Pokémon and everything the franchise brings to us, I am looking forward to this game. With the impending release of Pokémon Brilliant Diamond and Shining Pearl looming closer and closer I am hoping these will scratch that Pokémon itch I get until the release of Pokémon Legends: Arceus in 2022. Exploring the Hisui region looks like it is going to be great fun and hopefully, the new “core” game Pokémon fans have been longing for many years.

I was thrilled when this was announced. I played a Horizon Zero Dawn demo prior to its release and was shockingly disappointed. Looking back at it the demo had no explanation and no information. However, the full release came and filled in those holes I ended up loving the game. Alloy’s adventure continues in the Horizon Forbidden West with her now looking to find the source of a mysterious plague that kills everything in infects.

Mixing the world with everything the PS5 has to offer makes it my top game of 2022.

As with Brian, I am also excited for God of War Ragnarök. It’s certain to be a contender for Game of The Year and will undoubtedly sell consoles (assuming the stocks are there). I am eager to see what lays in store for Kratos and Atreus as the series arrives on its 4th generation of console.

I am looking forward to Hogwarts Legacy on the PS5. As a massive Harry Potter fan (thanks to my wife) I can’t wait to explore all the game has to offer when it eventually comes out. I really hope that it shows off the full capabilities of the PS5 as so far I feel that many have missed the mark. Will Avalanche software do it justice? Will Potter fans go wild? I can not wait!

We’ve not had a lot of news since the announcement trailer and no gameplay footage to go on. However, it looks like this could be a great third-person RPG with a branching story defined by the player’s moral choices. This one was pushed out of a vague 2021 release to sometime in 2022.

2022 brings the sequel to Techland’s popular open-world, parkour, survivor game, Dying Light. From the trailer above it looks like we can expect fluid world-traversing, explosive combat and a rich, choice-driven story. It’s been 6 years since Dying Light was released. We’re well overdue for another visit to this world and I can’t wait to dive in.

Bought to us by fantasy RPG hit-makers Bethesda. Starfield is a foray into Science Fiction and a universe 25 years in the making. We’re still about a year away from the initially planned launch date but it’s no surprise this is highly anticipated. Hopefully, we get some more news and a look at the gameplay early on in 2022. That should keep the hype simmering nicely until November.

Little Devil Inside, from what I can tell, looks like an action-adventure-RPG game. There’s hacking and slashing to be done, sure, but it’s not the combat that’s captured my eye. The world and the exploration of it look like serious fun. Shifting from a Final Fantasy style world map, the game zooms in when you reach areas of interest.

Little Devil Inside also has such a striking visual style – I can’t wait to get my hands on it. Everything has a tilt-shifted, diorama quality to it. It looks like someone has made all of these characters in real life and that you could order any of them from Etsy.

Is your most anticipated game listed above? Comment below or tag us on social media to join the conversation, all our links are below. We can’t wait to bring you reviews on these games and many more in the next year! Thanks for reading Thumb Culture in 2021.

2 thoughts on “Our Most Anticipated 2022 Games”