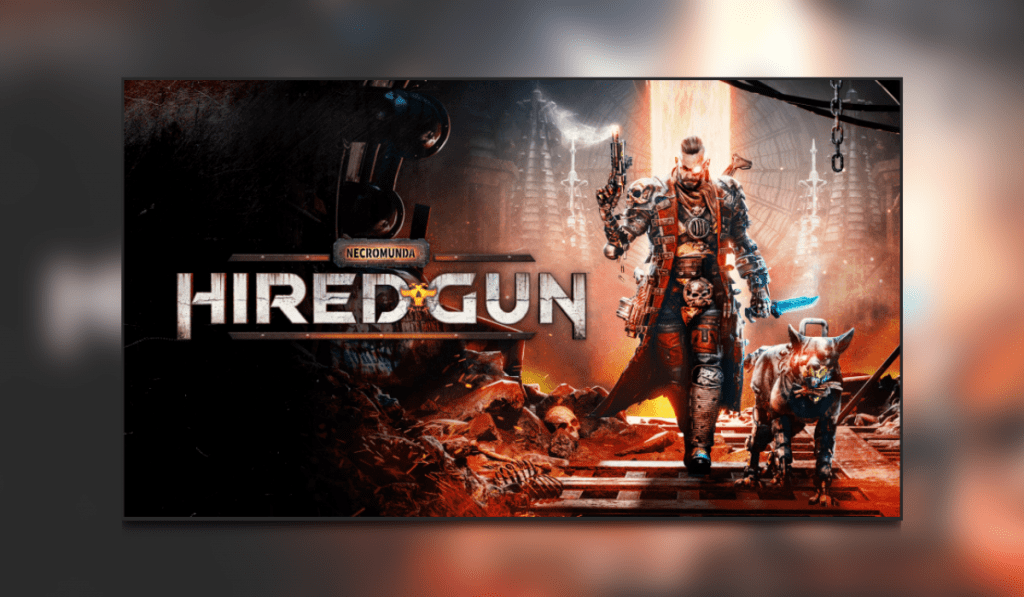 Welcome to my review of Necromunda: Hired Gun. Brought to the world by developers Streum On Studio (Space Hulk Deathwing) and publishers Focus Home Interactive (Hood Outlaws & Legends). Necromunda: Hired Gun is a first-person shooter with adventurer and RPG elements. It’s out now on Xbox Series X|S, Xbox One, PlayStation 4, PlayStation 5, and Windows PC via Steam and Epic Games Store.

As with most shooters, the gameplay is mainly focused on the use of guns and many fun ways to end your enemies. It’s all here, takedowns, huge explosions, heavy sounding assault rifles, pistols, shotguns. All based in the darkest, deepest depths of the Warhammer 40,000 hive world, Necromunda.

In Necromunda: Hired Gun we play as a hired mercenary who has an ever-faithful cyber-dog to help fight alongside us. The cyber dog is known as Mastiff and is merely OK at helping out. You call it in to help but most of the time it just seemed to stand there, not attacking enemies who were attacking me.

Whilst playing you will also unlock skill points. These skill points are used to unlock upgrades for various in the tech tree. These upgrades unlock various improvements such as the ability to handle guns better, increasing health, chances of finding items, and other upgrades such as increasing critical hit chances.

I mentioned takedowns above, these are relatively simple to achieve, sneak up on an enemy or simply shoot them a few times to catch them off guard. They are pretty brutal but they do get repetitive after a while. Kind of like Doom (2016)  which was fun for a while before it started to get a bit boring doing the same takedowns.

The enemies are also relatively easy to take down. I’ve not really struggled with any of the enemies I came across in Necromunda: Hired Gun, the basic enemies fall after a few shots from your assault rifle, the bigger ones take a few magazines of ammo, but they’re also not that tough. Shoot, shoot, shoot, dodge when they make their move. There are no difficult patterns to work out, as such.

Now the downfall, whilst there is a story, kind of, it’s not really in-depth. The world of Warhammer 40,000 is huge. As I am sure you’re aware. However, there’s no real use of lore, the story is rather lacking, and after a few hours, it will just feel like a typical run and gun game.

This is a real shame and I feel this lets the game down as it has so much potential. Bear this in mind if you’re looking to purchase the game. If you want something that is literally a basic shooter then go for it. If you’re looking for something with more of a story and a reason to be playing, this isn’t for you.

The graphics are nice on the Series S. They’re not amazing though. I can imagine if I was running this on an Xbox Series X it would be absolutely amazing whilst running at a good, stable frame rate. That is not the case on the Series S though, running at 1440p60 the game struggled to stick around 30fps. However, if I put it down to 1080p it ran at a more solid frame rate closer to 60fps. I ended up running this game at 1080p as it still looked pretty nice to be fair.

There’s just something about these sort of games that running them at higher frame rates satisfies the player more than the graphics, in my humble opinion.

Audio in Necromunda: Hired Gun is absolutely amazing. The soundtrack itself is pure class. Fast-paced, heavy guitar riffs suit this game to a tee. It sure is satisfying running into a group of enemies, guns blazing, whilst the audio is slamming down your ear canal to your eardrums. It really is bliss and not the Far Cry 5 kind.

Should you want to give it a listen, you can find the soundtrack on Spotify.

The game is not overly long, you’re looking at about 15 hours at most. That’s not long at all really but then you could find this for a good price which would balance this out. It sure is a fun time though. For me, this was definitely the ol’ quality over quantity type of game.

Whilst my experience with Necromunda: Hired Gun was not a perfect one, the game sure is fun as hell for a few hours. There’s something about this style of game that sits well with me regardless of how it runs. Just like Doom (2016) and the Serious Sam series. The real letdown is the lack of lore or a real story. I give Necromunda: Hired Gun the Thumb Culture Silver Award.