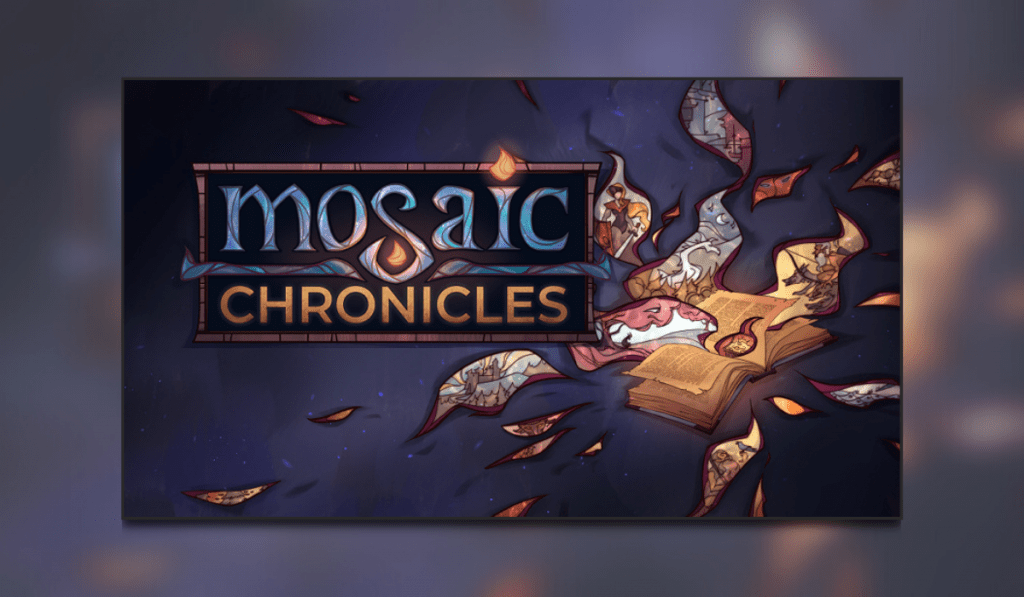 I recently took a look at Mosaic Chronicles, developed and published by Error300 for PC. The game entered early access on Steam on August 25th and appears to be one of two games currently in development by the small indie studio. Error300’s website shows the game displayed on a phone, but I haven’t been able to confirm if this will be an available platform. As the game title states, Mosaic Chronicles couples beautiful mosaic pieces of art together with a tale to follow along. Mosaic Chronicles definitely takes a different path to the puzzle game genre than that of my previous review of Seed of Life.

Chill and Puzzle in Mosaic Chronicles

The timing of my review for Mosaic Chronicles couldn’t have been better. I just got home from a week-long vacation with my family and another family. On this vacation, one of the main activities was working on a couple of thousand-piece jigsaw puzzles. We gave up on the first one after several days of trying but swiftly completed the second. Thankfully, Mosaic Chronicles was able to continue scratching that puzzling itch. Are jigsaw puzzles an enjoyable pastime for you as well? Let me know in the comments after you finish learning more about this relaxing piece of work.

The main objective of Mosaic Chronicles is as straightforward as it gets. Read a little part of the story with a preview of the mosaic scene, then put the pieces of the mosaic back together again. Completing the scene progresses you to the next part of the story and the next puzzle. It provides three levels of difficulty. These alter settings such as the number of set pieces and the rotation of the pieces you have to place. It also determines how long before you can use the hint button.

I played through the first story in Mosaic Chronicles on Normal. This seemed to be about right for the average puzzler like myself. It wasn’t terribly difficult or frustrating (like that one puzzle on vacation). Things also became easier once I found the “preview” button in the menu so I could reference the whole picture again. The gameplay itself felt smooth and the pieces snap into place once they are close enough to their exact position.

The only issues with Mosaic Chronicles that I could observe while playing were minor. The most notable issue that I hope Error300 fixes before the full release is with the auto-save. I hadn’t saved the game after completing a couple of scenes and upon returning to it found that the auto-save actually had saved from when I had last started playing. Ideally, this would save after each completed scene. However, I did find that after you are done with each scene it appears to stay as complete even if you start a new game.

My favorite part of the game is the gallery. Here you can find each scene with its associated story text. This gave me the ability to go back somewhere and actually read through the story. Mostly helpful because I often found myself forgetting the story piece that went along with the scene I was working on.

Scenes throughout Mosaic Chronicles truly are pieces of art. Each one appears to be crafted with care. I could imagine walking along a hallway in an old building where the scenes were stained glass windows lining it. The colors and tones all fit together well for the style of the game too. As far as graphic settings go, there is only a slider to adjust the background within the frame of the scene so you are able to more easily see the pieces. I honestly don’t feel that Mosaic Chronicles or this type of game, in general, would need any other settings to adjust.

Mosaic Chronicles also brings an original soundtrack to the table. The tracks provide a relaxing atmosphere to puzzle to without being overbearing or intrusive. There is a playlist (linked here) over on YouTube if you want to get a better feel of what you have to look forward to in the game. Other audio effects include those you’d expect of a jigsaw puzzle game – snapping of pieces into place, rotating of pieces, etc. It even includes a nice accomplishment audio clip along with an animation once you’ve completed the scene.

Even for being in Early Access, Mosaic Chronicles provides for some replay value with its different difficulty settings. Because it’s also such a casual setting, it easily allows for the player to go back and forth between the game and other tasks too. In fact, I spent the majority of the time writing this article while continuing to play.

There is currently only one full story and the start to a second available for play. I would assume though with “chronicles” being in the name that there is plenty of room for growth and adding additional stories down the line. This is definitely one that I’ll keep installed for the foreseeable future so I have something to turn to when I want to just chill.

Overall, Mosaic Chronicles is a wonderful start to what will eventually be a beautiful collection of tales and artwork. The gameplay is smooth and relaxing, with the added bonus of having the stories to go back and read through again separately on their own. Each of the scenes appears to be crafted with love and attention to detail. Not to mention the background music that provides a relaxing atmosphere to play to. If you enjoy putting together jigsaw puzzles in your free time, I would most certainly recommend picking up Mosaic Chronicles, either now or in the near future.

Even as an early access title, I see a lot of potential for Mosaic Chronicles. I award it the Thumb Culture Gold Award.