The Metro series originally hit the Xbox 360 and PC back in 2010. The Metro Redux collection brings together 2033 and its 2013 sequel, Last Light, to the Switch. My colleague Rich is tackling the latter game, with his review here. How does Metro 2033 Redux hold up in 2020? Read on to find out.

Metro 2033 Redux takes place following a nuclear conflict that has rendered much of Earth uninhabitable. In Moscow, many of the surface dwellers took shelter in the city’s expansive metro system and began to form into communities centred around each station. You take on the role of Artyom, a man who has spent most of his life in “Exhibition” station. Life in the station is quite peaceful, with music and laughter filling the tunnels. Unfortunately, all that is soon to change, as a growing threat from radioactive mutants (and worse) is poised to snuff out the last remnants of humanity.

It falls to Artyom to travel the Moscow underground to inform a distant station of the mounting threat. This means he must combat aforementioned in addition to paranormal nasties and unscrupulous bandits, the latter of whom plunder the peaceful communities for resources. 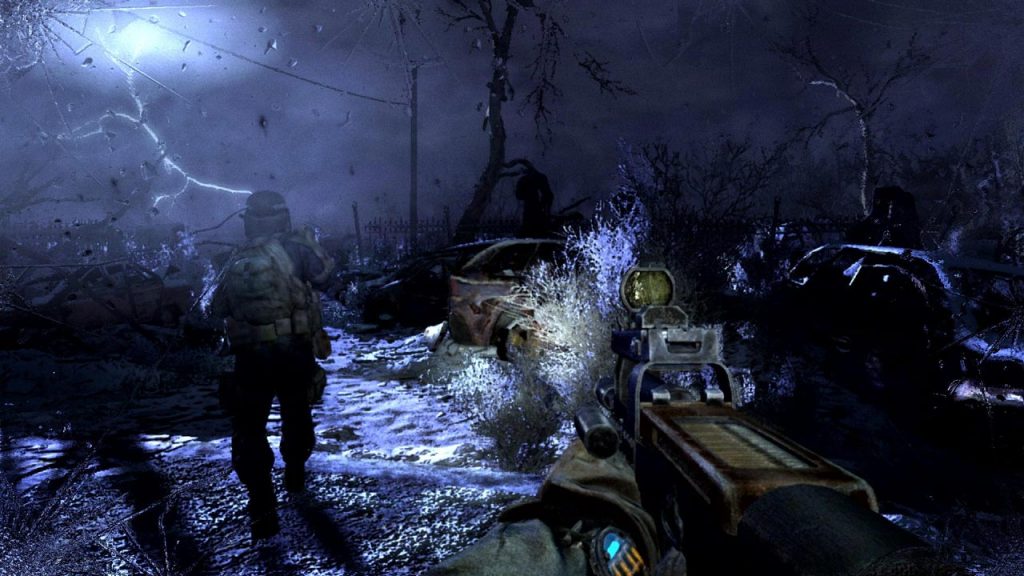 Metro 2033 Redux is a first-person shooter with survival horror elements, and in spite of a strong focus on storytelling, it rarely strays into other genres. Much of the gameplay centres around shooting, exploration and occasional stealth sequences.

The controls are fluid and work well on the Switch.  I found the sensitivity of the analogue sticks to be pretty well-tuned, but I found my accuracy improved when using the Pro controller.

The frame-rate is locked at 30fps and so gameplay feels really solid. The bugs of the original release are largely absent, but at times the AI can seem glitchy. Mutant enemies, when attacking in packs, tend to pile up on top of you and collide with one another in unnatural ways. Sometimes you will die as a result of unusual enemy behaviour, such as when the “demon” enemies relentlessly divebomb you before you can recover. 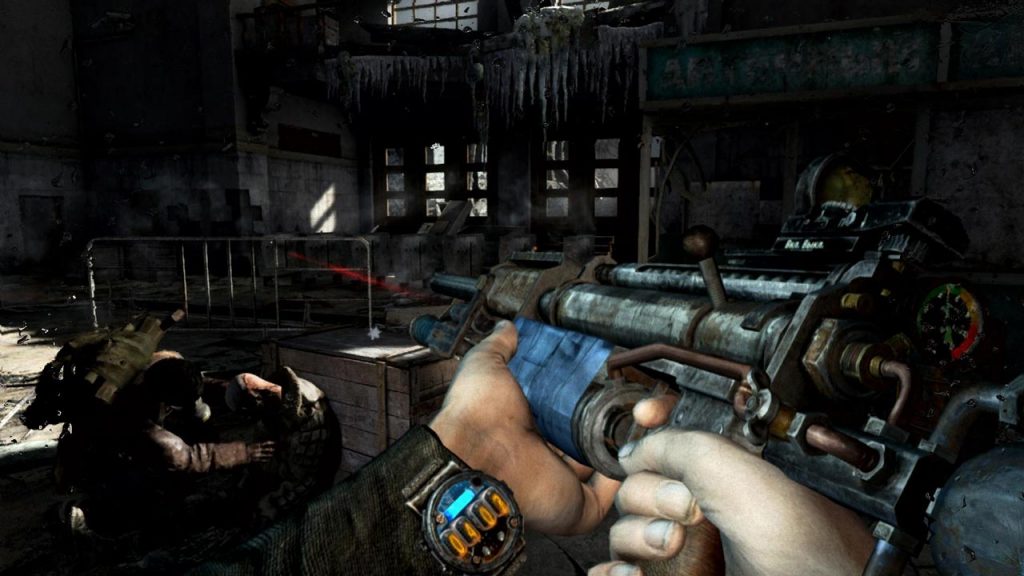 Artyom is one of those people who wears their watches on the insides of their wrists.

Metro 2033 is starting to feel its age in terms of level design. In outdoor sections, Artyom is required to pick his way over wrecked buildings and vehicles. These areas are often convoluted in terms of their layout.

This is compounded by the need to wear a gas-mask in contaminated areas. The gas-mask requires consumable filters which are in short supply, meaning you are exploring on a time limit. I was never sure when I would get the opportunity to replenish my supply of filters.  I tended to rush through dangerous areas, meaning I missed collectibles which offered further plot exposition. Ammunition is also pretty scarce, and if you’re carelessly spraying bullets you’ll quickly run out when you need them most. I was in two minds about the lack of ammunition and filters, as while they introduce frustration and at times unnecessary panic the limited consumables really help to increase the sense of fear and claustrophobia which the developers were obviously going for. It should be noted that you can choose a mode in which the gameplay has been tweaked to resemble that of the less survival horror-oriented sequel, with less of an emphasis on resource management.

Metro 2033 Redux is pretty successful in delivering some chilling moments. Sometimes you will travel the oppressive tunnels with a couple of other subway dwellers but the comfort of companionship starts to fade as the malign influence of the sinister “dark ones” starts hacking away at their sanity. Add to that that some of your brothers-in-arms seem less than trustworthy, to begin with. I enjoyed the sense of taking embarking on a journey through the abandoned territory.

Action sequences feel intense and involve carefully using your ammo to mitigate the ongoing threat. You can lure your enemies to an area that is populated by heavily armed friendlies if you are overwhelmed. There is a selection of weapons that all have their pluses and minuses. The shotgun is great for knocking back enemies but it’s small clip size and slow reload time means firing while in retreat to allow time to reload is necessary. The revolver is powerful against human enemies and can be fitted with a silencer, but it has a slower rate of fire and is less useful in close combat situations.

Load times between levels are very variable. Sometimes a level will load in 30 seconds or so, sometimes I had time to go away and make a strong cup of tea. Thankfully reloads after death is mercifully quick, meaning failure isn’t overly frustrating. 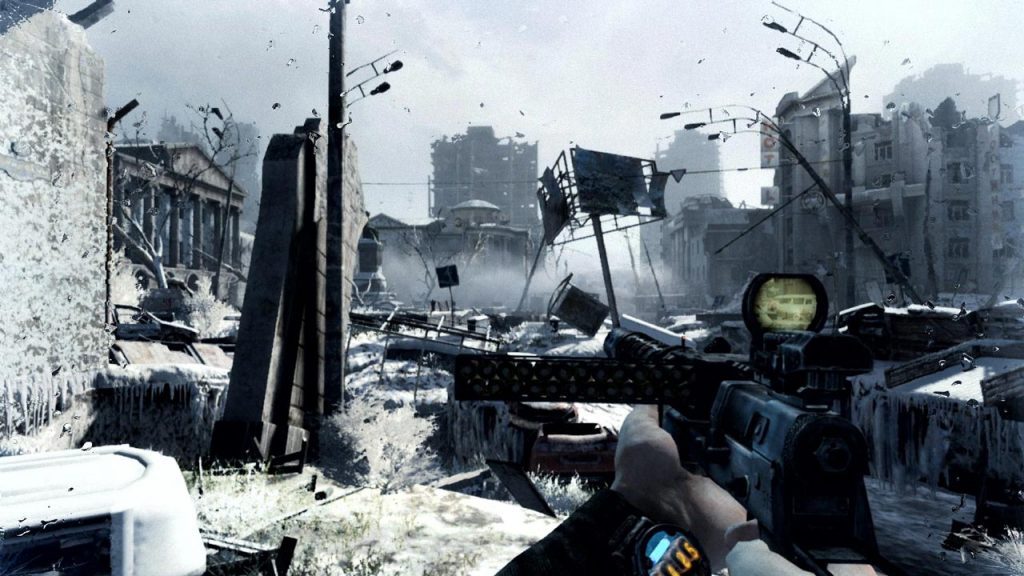 I think I preferred the tunnels.

Metro 2033 Redux is a great conversion. The developers used a method called temporal super-resolution to dynamically alter the resolution depending on what is happening on screen (you might want to visit Digital Foundry for a more in-depth explanation). Edges are clean and generally, blur is minimised, and it looks even better in handheld due to the smaller screen resolution. Metro 2033 Redux is a crisper experience than Wolfenstein 2, and feels less compromised as a result.

Character models look a bit dated and have a cartoony appearance. I would have preferred a slightly more realistic approach. You may find the tunnel environment repetitive over the course of the experience, although each station has a different feel and you’re never quite sure what to expect as you arrive at a new location.

Audio in Metro 2033 Redux helps to increase the tension, especially during stealth segments. If you are spotted by an enemy you’ll be hit with a startling orchestral stab. Monster sounds can be repetitive, which can be a problem when several of the same enemies are piling up on you.

I was impressed by how 4A games have used stereo sound to improve immersion. At times I had to take my headphones off to ensure there wasn’t a sound coming from one of the darker corners of my flat. This helps to recommend Metro 2033 Redux as an intimate handheld experience. 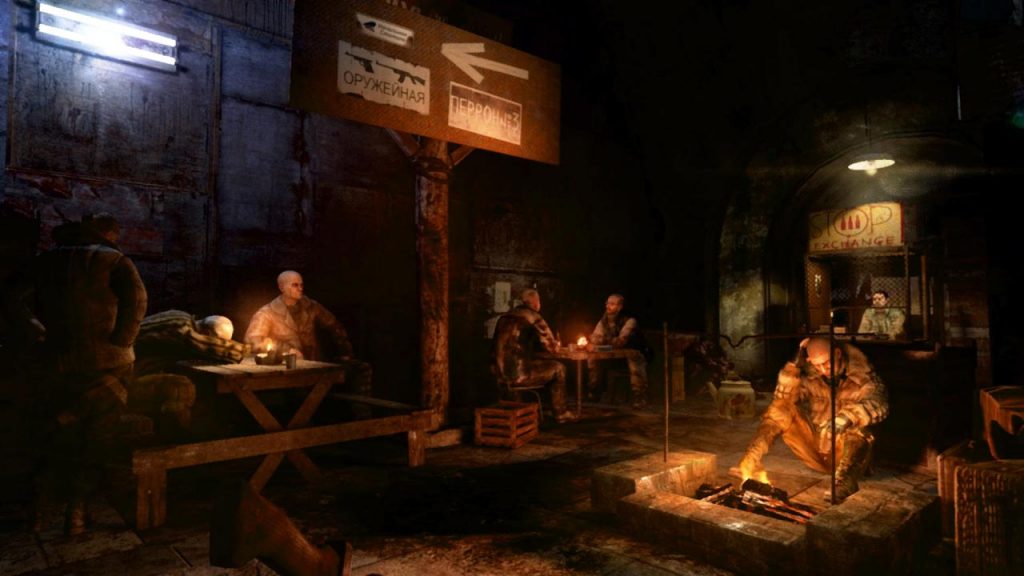 You can upgrade your weapons by visiting various dodgy vendors.

Metro 2033 Redux offers a 6-8 hour campaign, and harder difficulties will offer a slightly different experience due to a greater need to conserve ammo and avoid conflicts.

You will need to decide if a reasonably short but story-focused campaign is worth the £22.49 price tag.

Metro 2033 Redux is another great Switch port of a first-person shooter of yesteryear. It might not feel particularly fresh but if you’re a fan of the original and want to enjoy some of the improvements which have come to the Redux edition the Switch version Should more than satisfy.

I give Metro 2033 Redux the Thumb Culture silver award.

When I hear the word Trackmania, all I can think of are those really ...