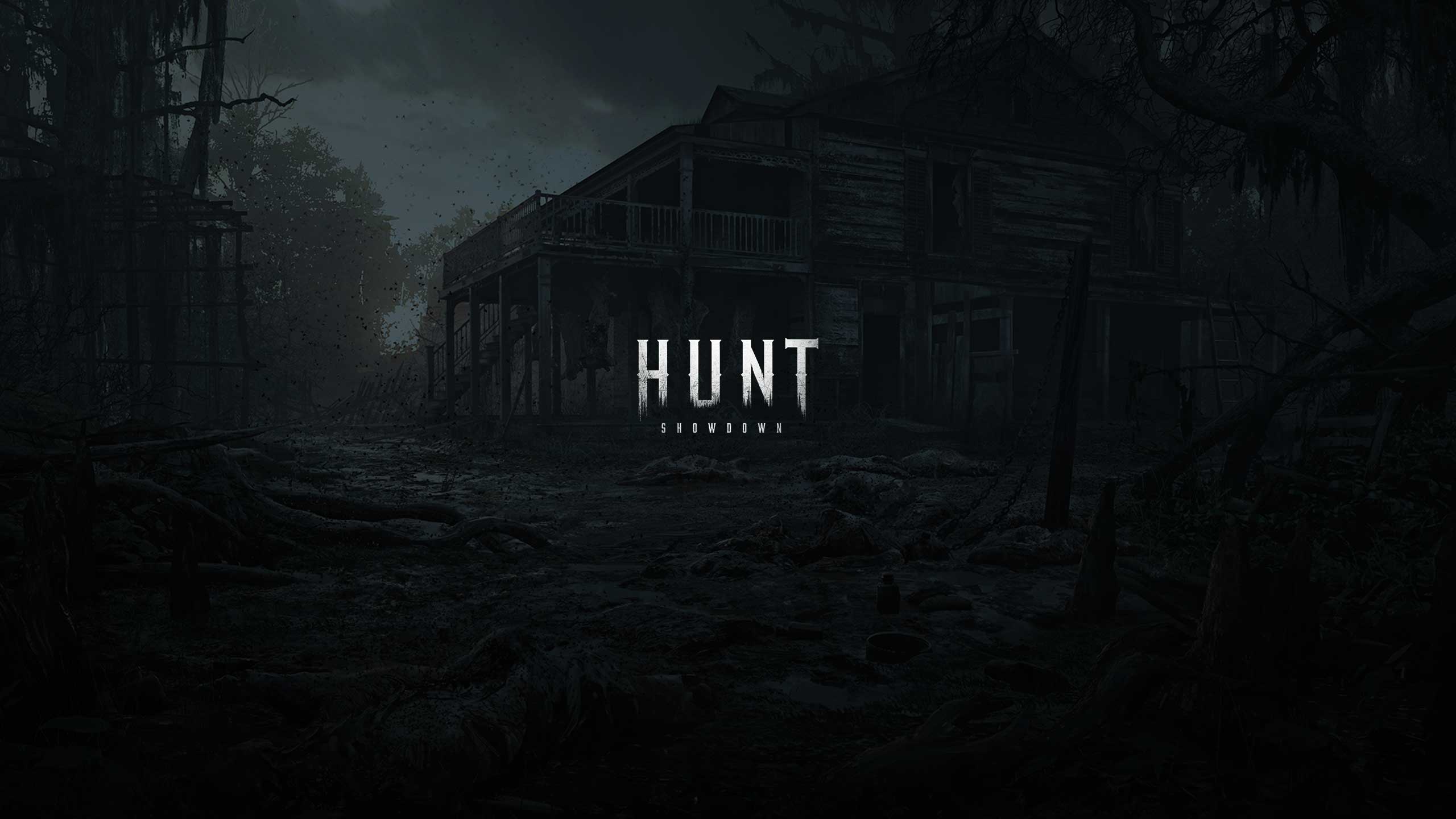 Is it safe to come out now?  For the last few days, I have been playing a multiplayer survival horror called Hunt: Showdown by Crytek on the PS4 and boy have I jumped out of my seat a few times in the process!

In a nutshell, Hunt: Showdown is what would happen if you blended Van Helsing, The Walking Dead and elements of The Darkzone from The Division into one and mixed them with some 1895 Louisiana inspired countryside.

Your core mission is to play as a hunter and track down mysterious bounties either by yourself, in a duo, or even a trio by investigating areas in your world that emit a strange glow that can only be seen while using a mysterious energy called Dark Sight.  For every bounty there are 3 locations in the world that you need to explore that contain a pile of eerie smoldering ash that will then begin to eliminate areas on the map, effectively leading you to where the bounty is to be found.  Ofcourse this sounds very easy so lets cut to the chase.  You are not alone by any means.  You are competing against other players who are all trying to track down the designated bounties as well.  You have no idea who they are, or where they are.  Indeed the hunter becomes the hunted.

As well as a PvP element to contend with, there is also another threat…PvE.  Yep you guessed it, 19th century zombies stalk the paths along with devil dogs, meatheads and other scary as hell beings that you do not want to get into a tangle with by yourself.  Each monster has its own strengths and weaknesses which you must exploit but more importantly you do not want to go in guns-a-blazin’ as that will draw attention to yourself from other players in the process.

You have an array of weapons, health kits and lethals at your disposal however they are limited and you must explore around the world to find resupply tins as well as loot dead bodies for different weapons.  One thing that is abundant within Hunt: Showdown are lanterns that can be shot or thrown to create basically a molotov cocktail of fire that will burn you as well as the enemy should you be standing in the wrong place.  Note: the flames to spread a bit so move!  Bear traps are also another fond favourite which can be deployed on the ground, or, if you haven’t got time, used to melee a zombie in the face. Ouch.

Shooting and setting fire to things is great fun however if you are to succeed in this perilous place, stealth is key.  By playing through your headset you will become instantly immersed into the world and mindful of everything around you, from the murder of crows that suddenly launch into the air squawking and giving your position away to the moaning and groaning of zombies, everything is out to get you or show your location off to the world.  Just wait until you encounter a giant spider running across the ceiling.  I seriously shouted “I don’t like it!!” at the screen when the scuttling sound went from ear to ear as the hellish arachnid ran in front of me.

Having watched The Walking Dead for a fair few series before I got bored, I was very cautious to not trigger items in the world such as generators, pianos, etc that would send the hordes after me.  So what did I go and do when I got to the top of a church tower and saw a rope with a noose on the end that I could interact with?  Well ofcourse curiosity got the better of me and I pressed the interaction button…only to find that it was the end of the bell rope, sending the bell into chime and telling every zombie, dog and player in the area where I was, and I was trapped!!

Should you die when playing as a part of a team you do have the chance to revive your fallen ally for a time being.  When they come back to the land of the living they will however of lost one of their 3 health blocks as a forfeit.

Anyway back to the mission, once you have taken the bounty down, which is effectively a boss fight, and ofcourse this can be carried out using any means necessary, you must banish the beast which will draw attention to you from everybody else in the world.  If you are successful at defending your loot for the time duration of the banishment, you must then evade capture and find the extraction zone.  You do have a handy perk if you happen to be carrying the bounty points however as it allows you to briefly use your Dark Sight to see enemy players, these will glow orange and give you a slight heads-up advantage.

Once you have successfully extracted, all of the spoils are shared equally amongst your team regardless of who was carrying the bounty.  These points/blood bonds can be used in the store to purchase new weapons and other paraphernalia ultimately allowing you to create new loadouts for your hunter character.  Upgrades can be performed including health and traits where you will be able to choose what passive bonuses your hunter possesses.

Currently there are only 2 maps to play on however they are of a decent size with lots of different areas to explore.  This will no doubt change as time goes on to keep the game feeling fresh.

Having watched Stu play this a while back on his PC (Master Race as he leads me to believe) via one of our past streams, I was left feeling a little bit disappointed at times with how it looks on the PS4 Pro.  Up close the definition of the monsters, trees, buildings are very detailed however from a slight distance it does begin to look a little ragged.  Trees, for example, lose their clarity.  I did also have a few issues with certain environmental objects that I could simply walk through, such as medium-sized trees and horses that were laying down.  It ruined the illusion slightly when stealthily navigating around an area, that and monsters suddenly appearing before you despite you seeing what is already in the distance.

Another bone of contention is that Hunt: Showdown has been capped at 30fps across consoles to keep it an even fight.  So despite me having a PS4 Pro, it allows the standard console to still keep up.  Bit of a shame but I can understand the reason.

I am wary that I have effectively slated the graphics a little which probably isn’t entirely fair.  Many of the issues can be patched and do not detract from the overall concept of the game, they are just things that I picked up on when playing and crapping myself.

Ok, so here is where Hunt: Showdown excels.  When I saw the notification come up at the start of the game to wear headphones I did as I was told and this was one of the reasons I spent each gaming session in a state of fright and paranoia.

The sudden environmental sounds that trigger while you are stalking the world serve to make you jump and briefly lose your mind as to what you were just doing.  Even when it is quiet and you believe you are safe, it does not stop a zombie or monster suddenly lashing out from behind you with a gurgling scream, sending shivers down your spine and setting your hairs on end.  See that calm looking swamp over there, just you try and walk through it and see what horrors lie beneath.  It is worth mentioning how awesome the Rag and Bone man style theme song called “Rise Up Dead Man” is too!  You will be humming it for days.

The variance in bounties combined with the many ways you can approach each subject keep Hunt: Showdown feeling like a new game each time.  Each team member has their own unique style of playing which adds a spin to how you must play.  For example one of our team decided that they must trigger every sound generating device that they came up against, leading to some squeaky bum moments as we ran for our lives in separate directions.  Exactly what the game wanted us to do.  There is a lot of lore behind everything that you see and do to explore as traits are unlocked and new perks are introduced.

Hunt: Showdown feels quite unique to me.  It has many different gameplay aspects going on, however, the idea of all tracking down the same bounty forces you to make a play and get the hell out of there as you have no time to sit around.  When playing as a team it is very enjoyable seeing how people react in certain situations that they were not ready for.  For example, when we encountered a spider boss, upon reloading the gun, the multiple presses to get reloaded accidentally triggered the door to shut, containing one of our posse in with the said spider, leading to screams down the headset in sheer horror from the player. The sheer evilness of the game and way that it puts you on the edge of your seat, at times for no apparent reason, is just genius.