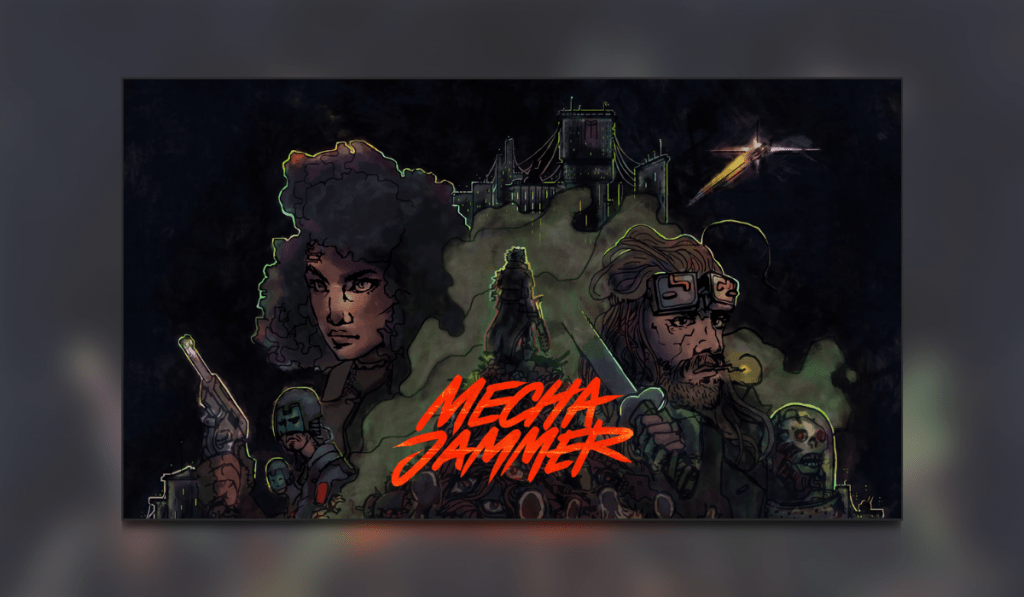 Mechajammer by Devs Whalenought Studios is a tactical cyberpunk turn-based RPG that allows you to take your turns simultaneously with those around you. Set in an off-world grindhouse of an urban and jungle colony it is down to you to recruit your crew and adventure through the gloomily lit city.

Mechajammer – Urban Survival At Its Heart

Are you ready to read on? Mechajammer is currently in demo form for PC over on Steam so you can join in as well. Let’s do this then and don’t forget to check out my other articles here on Thumb Culture!

I played the Mechajammer demo therefore elements of the gameplay are limited in some respects, however, it still allows you to get an overall feel for the game.

In the beginning, you can either choose from a pre-made character or create your own, there are a host of customisable options. Abilities and buffs are seemingly affected by age, previous job, and your type of birth. There is a DnD element to the stats and throughout the game, there are dice rolls to see if you are successful or not when undertaking events/decisions.

Starting a new game I initially woke up inside a building to be given a gun by a colleague who beckoned me to be careful.  The general idea of Mechajammer is to survive and escape.  The tutorial guided me through the beginning movements set inside the isometric 80s style grungey world. Using the mouse you simply point and click and your character makes their way to the position. Depending on where you are looking in the game affects what you can see. Large swathes of dark areas appearing and melting into the abyss as you walk along.

Shadows and undergrowth are used to your advantage as you use them to covertly move. The ability to move slowly, crouch, and also pick up and drop bodies is very handy when trying to be stealthy!

Character interaction comes across in a comic text way while larger interactions fill the screen with the person’s face. At certain times you can also drive the conversation using selectable responses to learn more.

Very quickly you are introduced to combat which places down a turn-based grid onto the floor that you can navigate tactically to take out the enemy. Unlike games such as X-COM, I did not spot any limitation of movement that you can take nor any expenditure on points that you can use. Again you just point and click while your enemy moves with you.

When it comes to weapons there is all manner of items that can be found when searching nearby crates, lockers, and dead bodies as well as bought. While the awesome sound of the laser guns is immensely satisfying you are limited by the amount of ammo. Of course, it always runs out and becomes hard to find in the tensest of situations!  Thankfully there are other handheld weapons such as swords, spiked clubs as well as throwables to carry on your killing spree.

Combat is hard and while you are sometimes lured into a false sense of security by the real-time movement, this is not a hack and slash game, therefore you will die if you try and take on a mob without taking your time to plan your tactics.  It is important to command your recruits.  Death sends you back to a hospital bed where a sarcastic droid awaits to patch you up once more.

While out exploring it is down to you to make notes using the terminal that you have as well as read through any information that you have collected. The map was disabled for use at the time of writing.

A new demo launched recently that now has you entering and exploring a fairly large cyberpunk city. Complete with vehicles and other NPC’s going about their daily lives. Starting at the abandoned Wolffz Bay Headquarters you now have a dock to infiltrate. This is with thanks to Pelican giving you a mission at the beginning. Despite starting as a new game, the demo appears to now not have a tutorial to guide you through the game mechanics. Either that or starting a new game has remembered that I completed a tutorial previously!

I was lucky enough to interview Whalenought Studios with some questions that I had on Mechajammer.  Here are their responses, enjoy!

“What are your influences behind Mechajammer? For me it reminded me of past games such as Syndicate on the Amiga with a splash of Xcom.”

“Syndicate is wonderful, and was definitely one of the games we played during our R&D period. When it comes to cyberpunk, dystopian games, Syndicate is pitch-perfect on execution. Shadowrun on SNES was another game that heavily inspired the atmosphere and art. Grandia’s combat system was one of our early influences that led to the now simultaneous turn-based combat. Mechajammer is designed to sort of act like an 80’s action movie, which was the real inspiration for it. Escape from New York, Aliens, Robocop were all the inspirations for how things should feel and play out, getting that very analog feel for the world.”

“I found the combat very tricky at times with limited ammo and multiple enemies. Is this to quickly show the player that this cannot be a solo effort and you must recruit others in order to be successful?”

“Getting companions can definitely be a key to success, and there are several ways to do it. You can use a Social aptitude to charm, unfortunately, denizens on the street to come with you, infuse dead bodies with some techno-necromancy and have them shamble along with you, use robotics on weapons on the ground to create killing roombas, ally with gangs and have a pool of their thugs to pull from, and of course do the classics: hire mercenaries at the bar or find the lone soul in a dungeon and help her out so she’ll join you. When you fall from too many wounds, your allies will roll their Organics skill to heal you, so you don’t have to get carried away back to your base and have enemies reset, so they are pretty handy to have at least in the back. Conversely, your crew dies permanently if you can’t get to them while they are bleeding out, so we keep options open for replacements.

Mechajammer is very pixelly however the art style oozes an 80’s vibe. Radar stations and fences have that raw feel about them that for some reason made me think of the A-Team. It also reminded me of games such as Operation Wolf and the classic Syndicate. The isometric layout is non-rotational but I did not have any issues with losing characters behind walls. As mentioned earlier, the world is revealed as you walk close to it. This is affected by each of the playable characters as they have a differing vision distance. At times, I did not initially see items that had been dropped onto the floor as on occasion they blended into the surrounding pixels.

I asked Whalenought Studios about their graphical choice for Mechajammer.

“We’ve used pixel art in our previous two games, so it’s a familiar route for us, but mostly we just liked how abstract the pixels make the world, and how textured and grimy they make the buildings and streets feel. We felt like realistic or comic-styled 3d graphics weren’t giving off the sweaty feel that we were really trying to capture for the city in Mechajammer, and pixel art did a great job of creating the kind of atmosphere we envisioned.”

The soundtrack is very electronic and slightly Vangelis. It has Blade Runner undertones with swooping bassy gushes along with an ambient haunting synth. There’s also the odd short melodic keyboard piece thrown in. The music fits perfectly with the futuristic setting and sets the atmosphere perfectly.

I put my thoughts on the soundtrack to Whalenaught Studios for comment:

“Our composer, Kevin Balke, is fantastic and has created a wonderful soundtrack to go with the game, we’re so excited about what he’s put together for Mechajammer. 80s synth like Blade Runner and Terminator were for sure influences. It’s a really cool soundtrack that runs about two hours. There are various gangs and syndicate factions, each with their own themed tracks when you’re in their zones. Kevin’s done some amazing work to give them unique atmosphere.”

Sound effects help create the environment that you play in. In Mechajammer rumbling bikes and cars trundle down the roads. The steady rainfall sounds close by with large noisy drips clattering around you. During combat, the laser weapons let off a satisfying pew-pew noise.

Mechajammer promises to deliver a large tactical RPG experience filled with huge character customisation. 80’s nostalgia is rife. Tugging at anyone my age’s heartstrings along with the thrill of recruiting your squad, side quests, and of course, trying to escape the hostile colony. Mechajammer certainly has a lot going on that will take you a while to unravel.

Mechajammer is an interesting game for sure. A lot of effort has certainly gone into the game mechanics, storyline, audio, and graphics. This creates the cyberpunk land that lays before you.  While I found combat immensely hard and very unforgiving I had a great time exploring the region and trying to gather intel on a route out of here.

Mechajammer is available as a free demo in the Steam store, go give it a try!