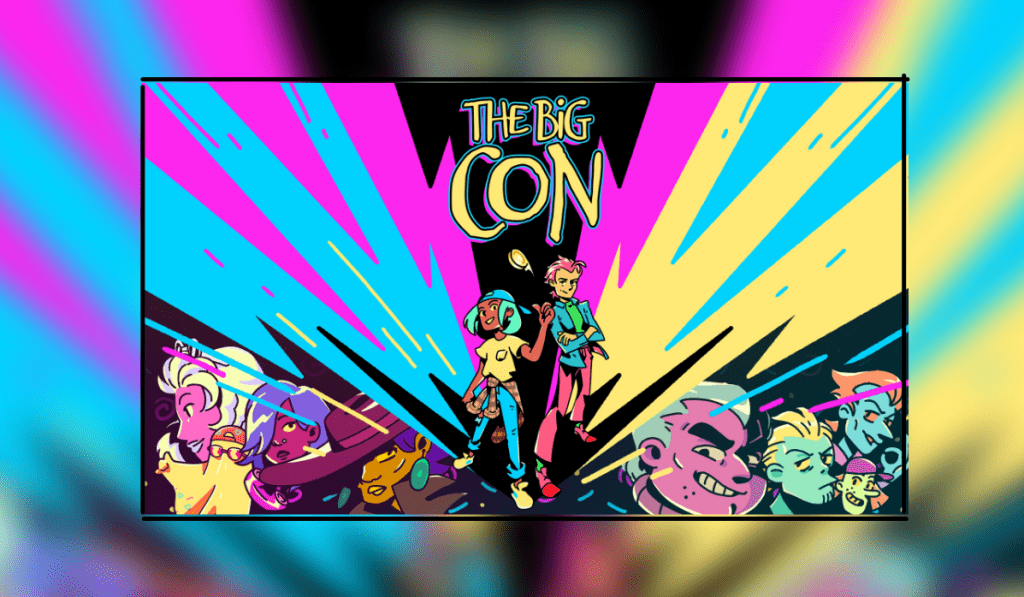 Just imagine, what would happen if every piece of pop culture and cliche from the ’90s became a human form and made a game, this would be the result. The Big Con is an action RPG game developed by Mighty Yell and published by Skybound Games. It was released on August 31st 2021 on PC and Xbox One.

I find myself very attracted to anything heist related, especially movies. Baby Driver, The Killing, and Snatch are some of my favourites. I’ve even seen Rififi, bet you haven’t even heard of that. Anyway, I’ve never really played any heist games so I was really looking forward to this. And I do love me some 90’s nostalgia so it’s great to see. Let’s give this a shot and see if it’s worth it. If you’re looking forward to this or want to share your own thoughts, leave a comment. We always love to hear back.

The Big Con focuses on a girl named Ali whose mom owns an essential place of 90’s nostalgia, a video store. One day, the store is visited by loan sharks who are here for Ali’s mom. She owes them lots of money and they want it now. She doesn’t have it but they want it soon. Ali decides to take matters into her own hands and behind her moms back, starts taking lessons on how to steal from people so she can raise the money. Also through her pickpocketing journey, she is accompanied by a ghost from one of her posters. 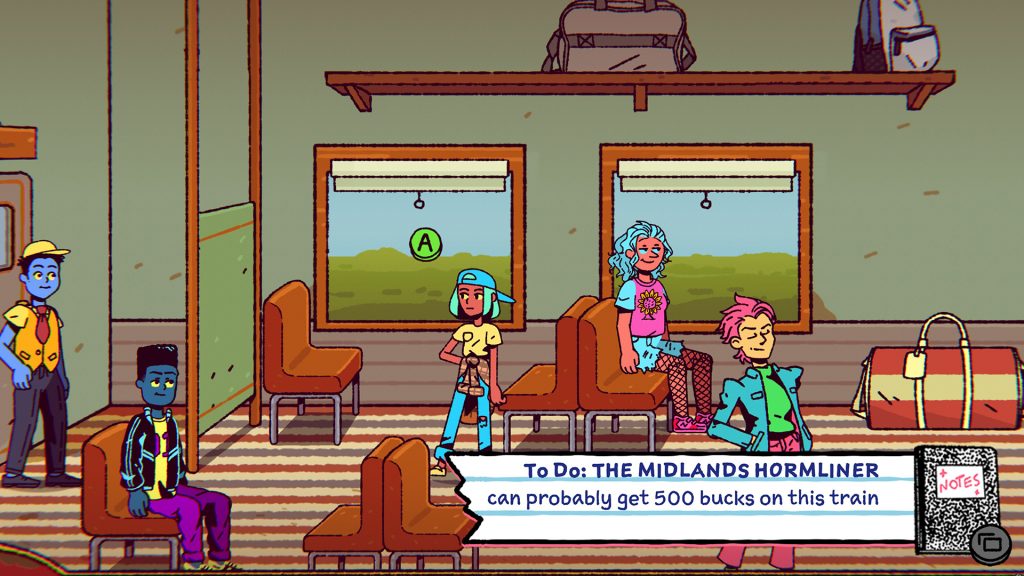 My favourite part about the plot is how simple it is and it fits the game. The Big Con takes place in a small town and the con isn’t anything major. It’s the perfect crime to commit in a small town. The Big Con is full of 90’s nostalgia and it can be great for the first few minutes but after that, it feels like they’re shoving it down our throat. Also, the characters are all great but the way they walk is kind of weird. It all just seems kind of off. But if you really want to nitpick, let me talk about the controls.

They’re not the absolute worst but they could have been better. I know I say this a lot about controls being scattered but that isn’t an exaggeration here. It feels like the keys they picked for the controls were chosen at random. It gets annoying fast. The controls aren’t the best but The Big Con is still really fun. Right when it starts off, it introduces the stealth aspect well by having you spy on customers to see what they’re in the mood for watching. Introducing a key aspect from the game and familiarizing yourself with the technique from the beginning is just fantastic. Also, every time there is a cut scene, the game has this very 90’s looking background. It does look cool but it can get annoying fast. 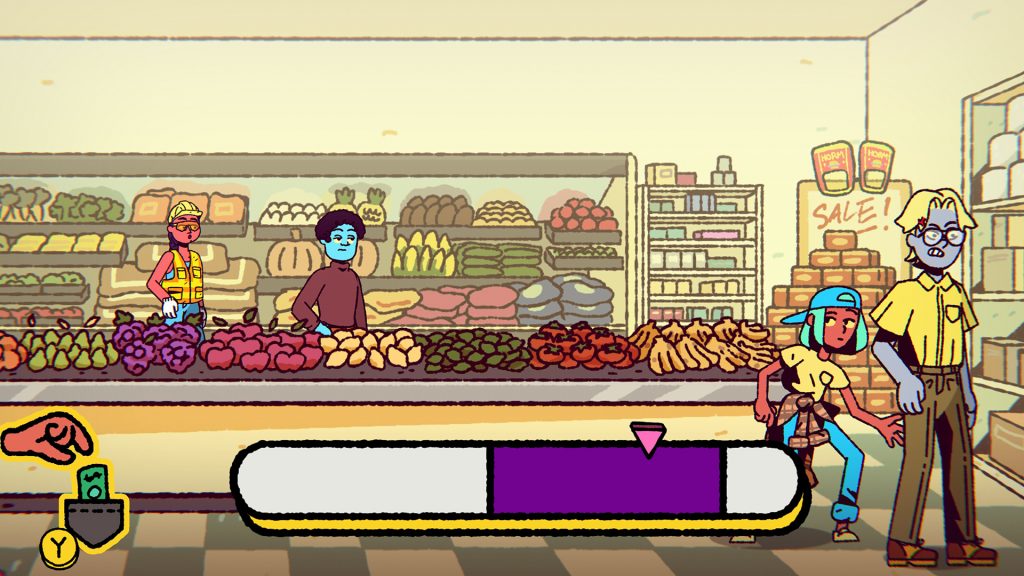 An example of the pickpocketing maneuver

I’ll say this, the graphics are very good. I think the designers were going for a comic book style look and it really pays off. The characters all fit the world well but the character animation could use some more improvement. It doesn’t look like they walk like real people. There also weren’t any major errors or glitches I found, it all ran pretty smoothly. The Big Con is also a very colourful game. There wasn’t a single thing I found that didn’t stand out. All of this fits the setting flawlessly.

Once again, the music is great in a game that I review. It has a cool techno soundtrack that fits in and the score hits all the right notes during points in what Ali is feeling. It becomes sad during the sad moments and mellow during the non-action parts. Also, there isn’t really any characters talking in the game, it’s mostly grunts and other noises. But the audio overall is fantastic. 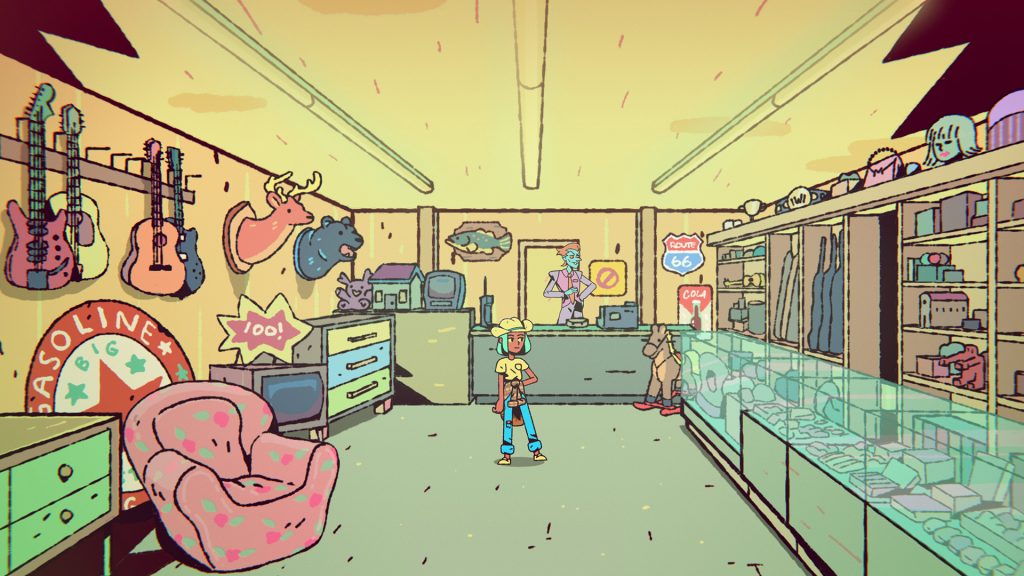 So many things to steal

This really depends on how long you play it for. There are side missions so it can take you even longer. But it all depends on how quickly you collect the money to save the video store.

In conclusion, this is a game I had an absolute blast playing. As I said, I love anything heist related. The characters are great, the gameplay is fun, the plot is fresh and there is so much 90’s nostalgia to keep you entertained. This is a game right up there with Monobot that I can see myself recommending to people.

The Big Con definitely has its problems but they’re easy to avoid. It’s nothing major or game-breaking. If you love a good heist game, a good laugh, or some 90’s cheesiness, The Big Con is the perfect game for you. With that, I am giving The Big Con the Thumb Culture Silver Award