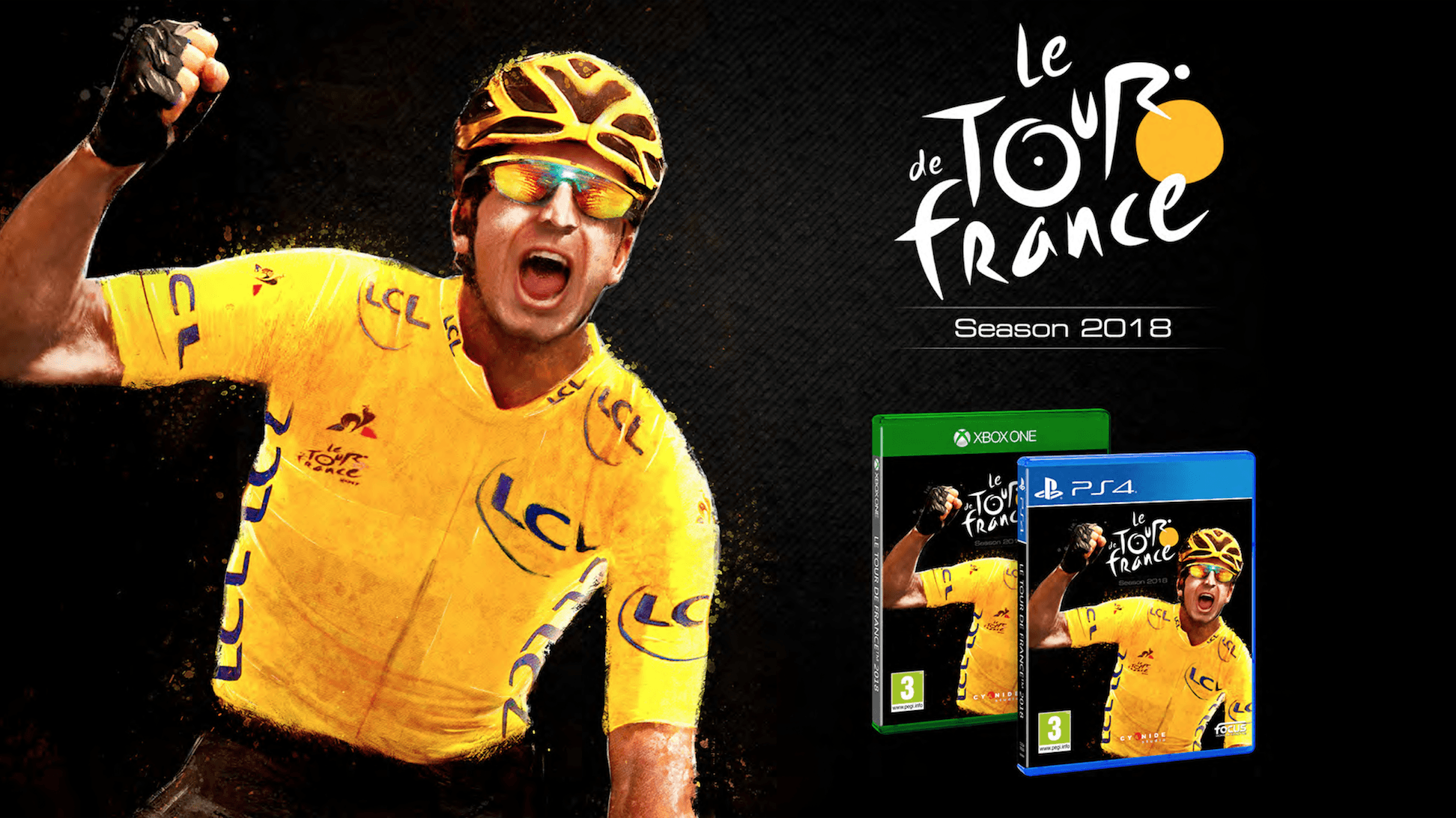 While the rest of the country is glued to TV’s asking whether or not football really is coming home, I squeezed my ample  frame into a lycra onesie, put on my cleats and filled my water bottle with vodka and coke to play Le Tour De France Season 2018 on the PS4. Brought to us by Cyanide Studios and Focus Home Interactive, Le Tour De France Season 2018 was released at the end of June on PS4, Xbox One and PC.

The Tour De France series of games started back in 2010 and is based on one of the world’s most iconic sporting events. It is a deep and engaging simulator which allows you to play as both an active rider and strategic manager for your team. The game allows you to play solo, in 1v1 or couch co-op as a rider and across a range of races. Tour mode allows you to play through the classic event as a team member, but you can also create your own tour or just participate in some of the classic challenges that the Tour De France is known for, such as the world cham
pionship race or the rainbow jersey race.

You can create and edit your own team in Pro Leader mode or go all strategic and in Pro Team mode with a 15 strong team of cyclists that you train, develop and lead. The hands-on rider play is less button mashing and more balancing the speed of the rider with the hills and wind around them. Decisions like when to surge ahead and break from the pack, right down to which energy gel to take and when are down to you.

This latest edition adds the aforementioned ProLeader mode and new strategic elements of the Pro Team mode such as peak fitness where you have to develop riders over the seasons and a progression system which allows you to unlock new bikes, components and riders as your team progress. 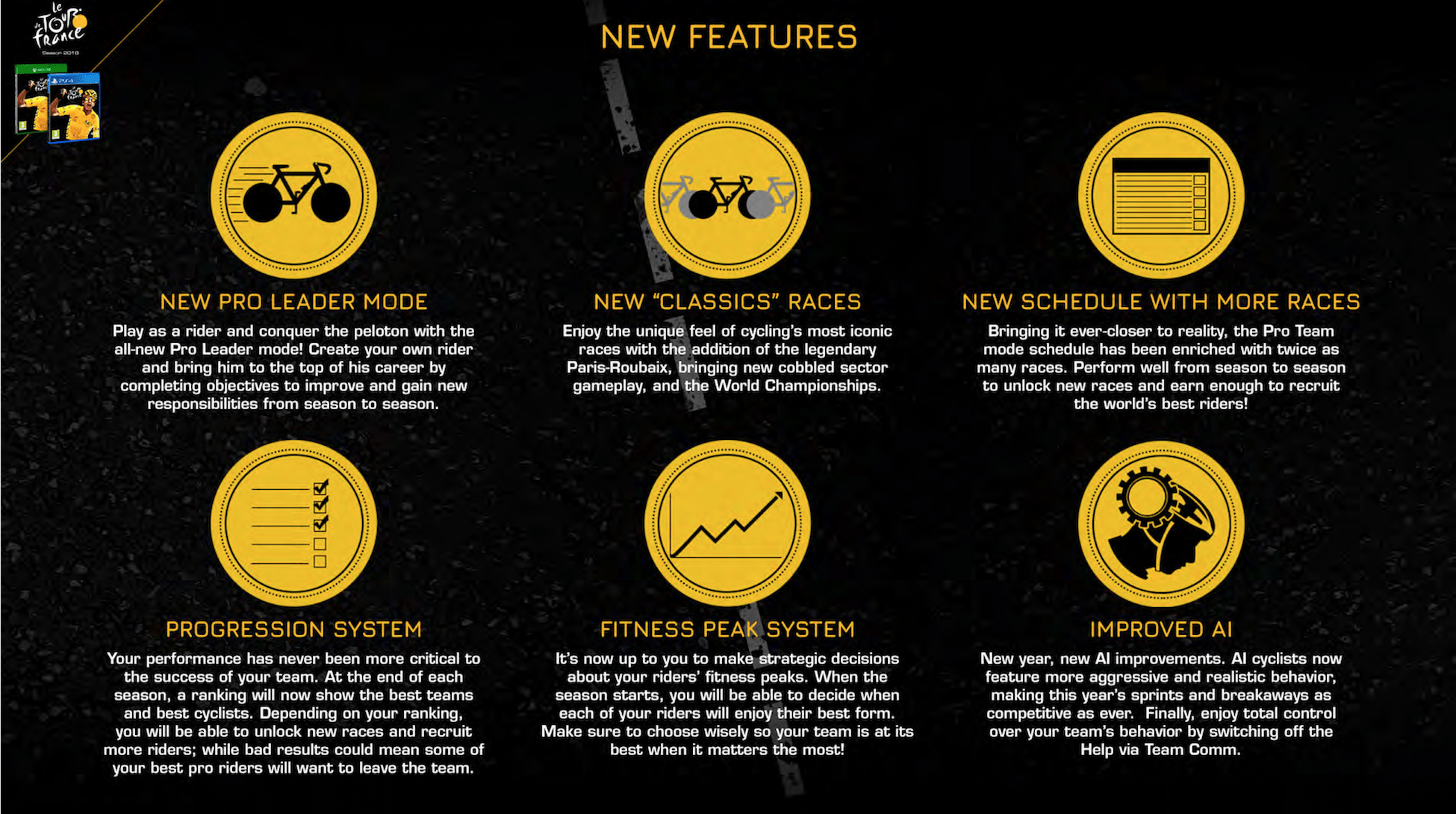 For a first-time player of these titles, the tutorial was great allowing you to play about and smash buttons to get your speed up before introducing you to how to play smart and think tactically about how to be competitive across mountains, towns and downhill stages, through the rolling French countryside to the cobbled streets in a mixture of race, time trial and downhill stages. The stages are accurate to the event and, so, can feel really long but the gameplay allows you to choose a shorter route and still experience the different environments.

You can use team control to direct others in your group to surge ahead or protect you. Alternatively, you can jump into the body of anyone on your team. The game does everything it can to keep you involved and having fun.

Played on a standard PS4 Le Tour De France Season 2018 looks great. Even with a long draw distance and dozens of riders around you, the game doesn’t slow down or freeze up. Your character passes through others in standard mode, so there is no combat element to this game. It is a strategic bike simulator not a remake of Sega’s Road Rash, where you could kick motorcyclists you were racing against. Textures look good and there is a really wide variety of NPC’s in the crowds surrounding the roads you race on. 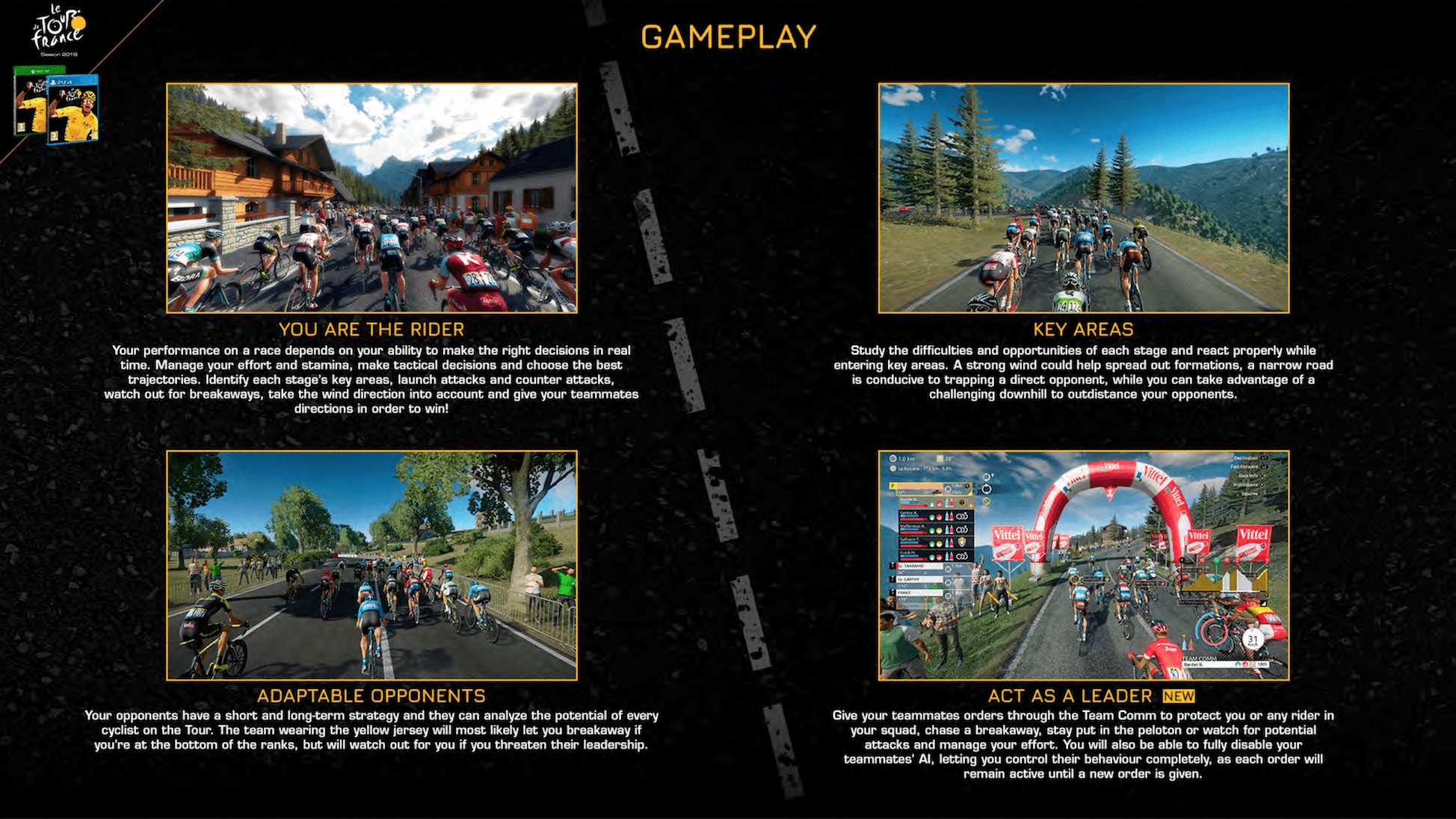 The other cyclists around you move independently and stand, lean and turn at different times. It’s a clever blend of player controlled and strategic player management.

The soundtrack to the game is the calls, cow bells and cheers of the crowd. Your coach is often talking to you telling you about your progress, your team or (in my case) how close you are to “blowing up” (a cyclist phrase for burning up all your energy and hitting the wall).

Environmental sounds help to build the atmosphere form the wind blowing to the sound of tyre on the road on faster sections, it’s all there and will be great for enthusiasts.

There is a huge range of game modes in Le Tour De France Season 2018 that will keep cycling enthusiast entertained for months! To play through the whole tournament would take weeks (a bit like the real thing), so if cycling is your thing this will be a great thing to do when the long rides are over, the bike is cleaned and the lycra is hung up. As a non-enthusiast I can appreciate the quality of the game and variety available, but it doesn’t have that same level of addiction. If a motor racing game could blend racing with strategy the way this does I would be completely in. Little touches, like the ability to set a rider up and then fast forward at that level for a while means that the longer sections can be completed in good time, but the sheer level of detail available shows that this is intended for people who are already fans, and that they will love it.

Le Tour De France Season 2018 is a perfectly balanced race simulator which allows you to leave the saddle, set team actions, strategic goals and season long targets. It does these things superbly and has enough other elements to keep it fun. The challenges section allows for 1v1 downhill races which are fast paced and fun.

The actual Tour De France https://www.letour.fr/en/computer-consol-games is a huge sporting event and a massive physical challenge for some of the fittest people on earth, and although this is a gamified version it has a sense of gravitas that is appropriate. You get how big the event is and how hard it is to be competitive.

It looks good, sounds great and draws you in. A lot of cyclist will lose some of their peak fitness when they find themselves out of the saddle and sat on their sofas playing this for hours on end.

This game gets a Gold Thumb Culture Award, it could not do anything better than it does (maybe combat) but is for a niche market. It’s not a must own for gamers, but for cyclists it’s essential.

Disclaimer: A review code was supplied for this game.