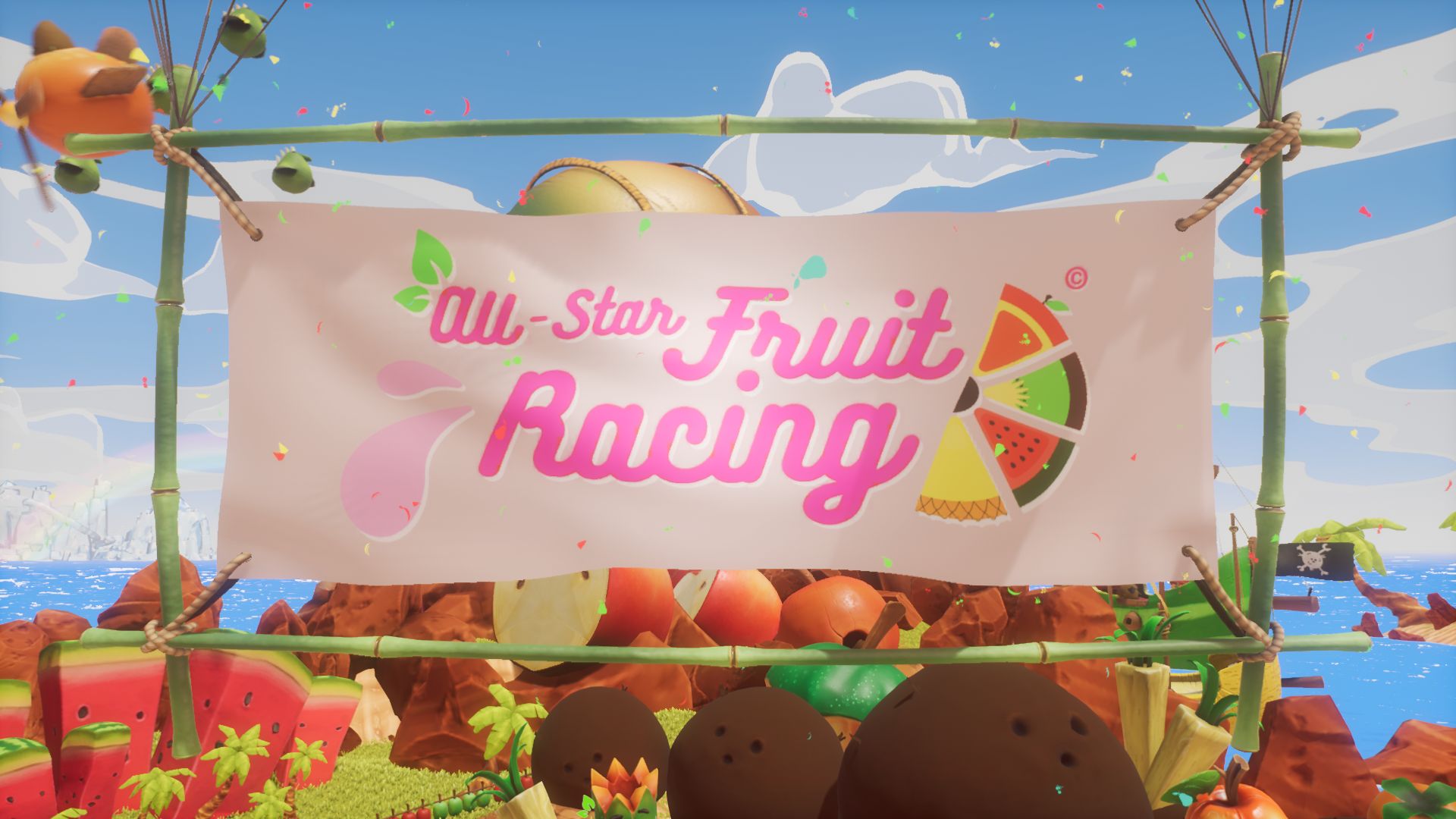 All-Star Fruit Racing is the latest release from 3D Clouds and is finally making its way over onto console. Being completely honest at first glance when I was given this to review, I was expecting a budget ‘Mario Kart’ wannabe with little to no variety or replay value. I don’t think I’ve ever been happier to be wrong!

Taking into account the price point (£31.49 (on PSN) at the time of writing). I think All-Star Fruit Racing could be up there as one of the most fun ‘pick up ‘n’ play’ racing games for the PlayStation 4. Below are the reasons why I think everyone should play this game…

The first thing that impressed me with All-Star Fruit Racing was, instead of bringing up the main menu and letting you pick and choose what you want to play around with, it instantly throws you into a basic tutorial. Now, before you start thinking of how much of a pain I’ve said forced tutorials are in my other reviews, or how its going to be annoying to skip it every time you want to play. It only comes up the first time you play. Once you have a save file created its business as usual.

As you would expect with a racing game, there are a multitude of options to select from: Online, Career, Basic Race, Split Screen Multiplayer etc. Rather than detail every section individually, I’ll focus on Career mode. This is purely because all the other modes have the same gameplay functions they just pick and choose which ones. This way it will avoid lot of repetition.

The Career mode is very much what I think people will be expecting when thinking of a kart racing game. You have multiple cups split across 3 difficulties (or engine sizes as they are listed). Each Cup consists of a varying number of races with a points system to decide who wins the trophy at the end. 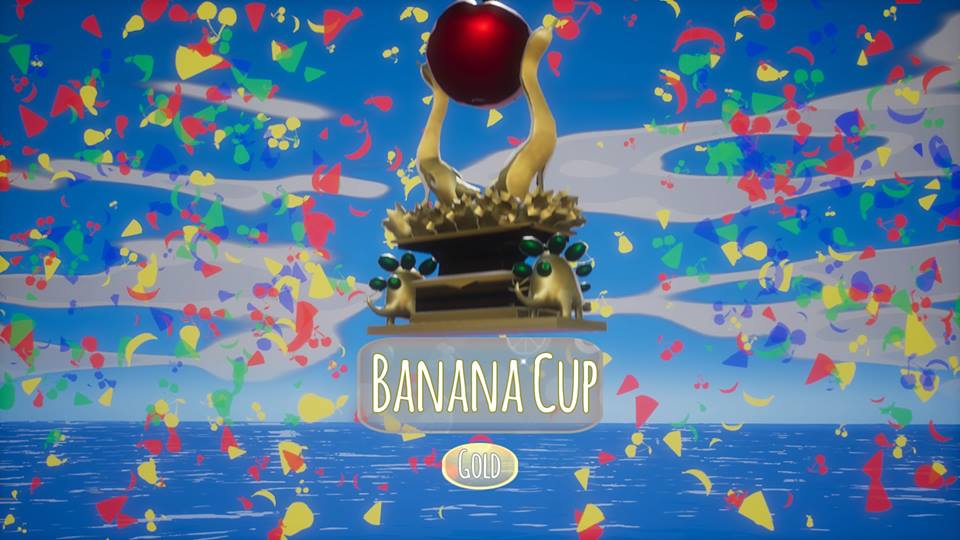 There are a variety of race types that move across multiple courses, some are the classic multi-lap circuits. Others, are a fastest from point A-B. Then there are the knockout style races (which I personally like the most). A timer is constantly running down and whoever is in last place every time it reaches zero is eliminated (A nice test of strategy).

Moving on to the weapons. As you’re racing, the pick-ups fall into 4 categories: Spring, Summer, Autumn and Winter. Each category has its own series of weapons that you can use with the more fruit you collect (they are colour coded – Red, Blue, Green etc.). If you collect enough of all 4 categories then you obtain your ‘Juiced up’ weapon which relates to the fruit that your character is linked with. 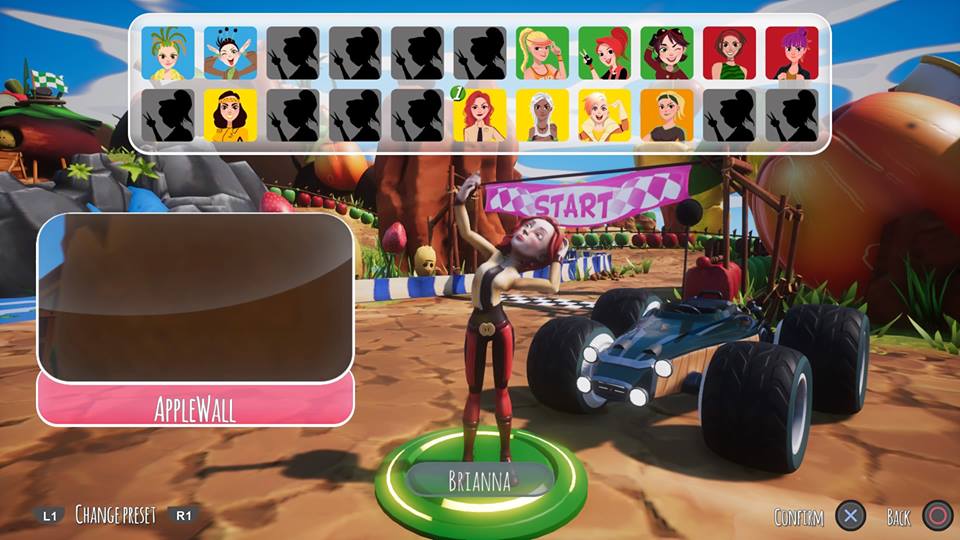 At the start of the game there’s only a handful of characters available, the others all need to be unlocked in various ways. The Unlockable items in this game gave me a nostalgic feeling of the way games were back before ‘DLC’ and buy to win (Loot Boxes) where all the additional Characters and items etc. were included within the game but you had to be good to unlock them.

All-Star Fruit Racer does have a Racer Customisation section where you can make a custom Kart using a bunch of the unlockable items obtained throughout the races. It reminds me very much of a Rocket League style setup for this section which I don’t mind in the slightest as that was one of my favourite parts of Rocket League. 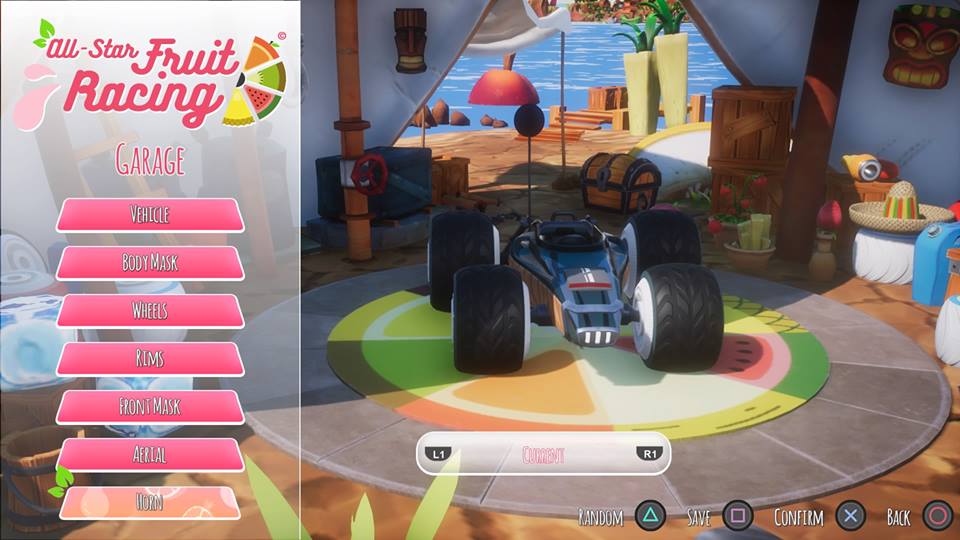 After throwing around 20 hours into it, I can honestly say I’ve experienced very little in terms of problems or issues with the controls or gameplay, this is probably because it’s rather simple in essence. But, simple doesn’t mean bad!

Note: At the time of writing the review the Online Multiplayer was very much hit and miss, this was probably due to it being prior to release. I have left this section of the game out of the review as it would be unfair to judge the game at this time.

All Star Fruit Racer has a very nice cartoon style to it. For anyone who plays it, I would recommend putting the controller down and just enjoying the visuals of each race track. With each track being based around fruits, it’s very much something I would place right at home alongside Charlie and the Chocolate Factory, or in Video Games, alongside Zool. 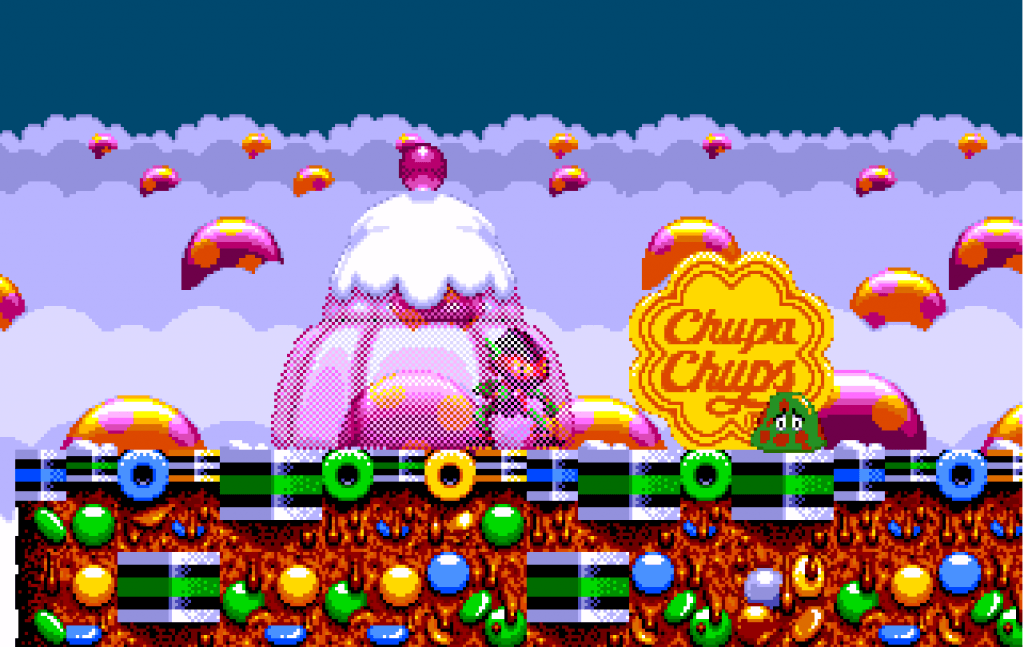 Something that did annoy me a little at times were the hit boxes on the planted weapons, they seemed to be out of sync with the actual items. At times I would trigger the hazard even though I was on the other side of the track. What made it more annoying was the inconsistency of where the hit box would be, it was like the game was confused as to where the item landed.

The Audio overall in All Star Fruit Racer is a very nice fit for the style of the game. It’s a little unrealistic, but having said that you’re driving around a track throwing giant pieces of fruit at each other. So I’m guessing realistic wasn’t the intention.

Each character has their own unique cheer and ‘in race’ sounds which are noticeable but very subtle when in with the overall scheme of things. The only thing I would have liked to hear more of would have been background ambient noise from the tracks. Not a negative in any way, purely a personal preference to settle my curiosity of what else is happening in these little places.

I think this will be a matter of personal opinion as it’s not like a platform or an Adventure game where once you complete it you have to choose if you want to start over. In my opinion I think there will be plenty here to keep people busy mainly with online play and unlockable items (hopefully there may be a few different skins and customization options with DLC later down the line). 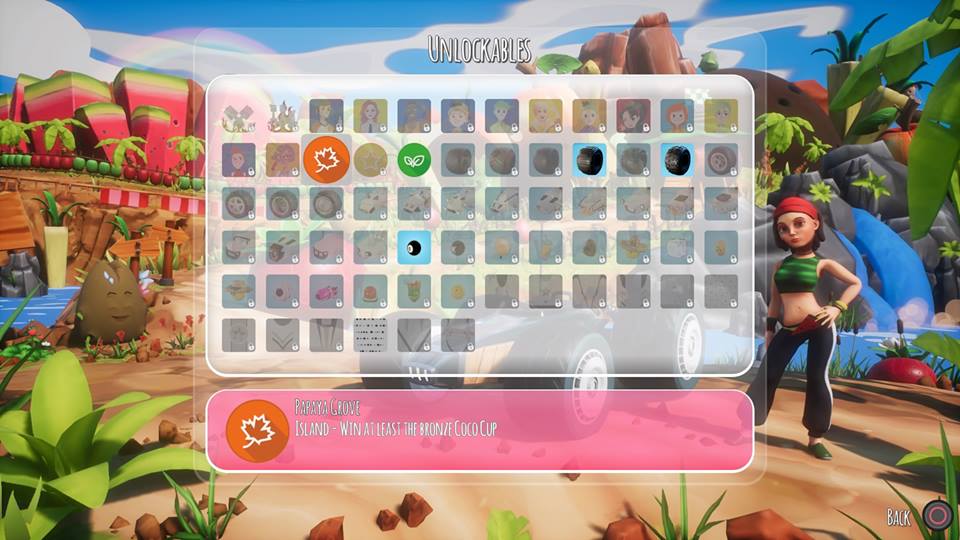 For any trophy hunters out there, I think this will be one that may keep you busy for a fair amount of time due to some of the trophies being related to time trials etc.

The best thing about this type of game, you don’t need to have 4 hours spare just to get into it. We can all appreciate that life gets in the way of gaming at times. But here if you have just 20 minutes, you can get in a couple of races. That’s what I think will be one of the main things to keep people coming back.

3D Clouds have done an excellent job with All Star Fruit Racing in creating a fun Kart style Racing game that should appeal to both younger and older gamers. The online function will be key to its success in my opinion so I hope a lot of people get online and start racing!