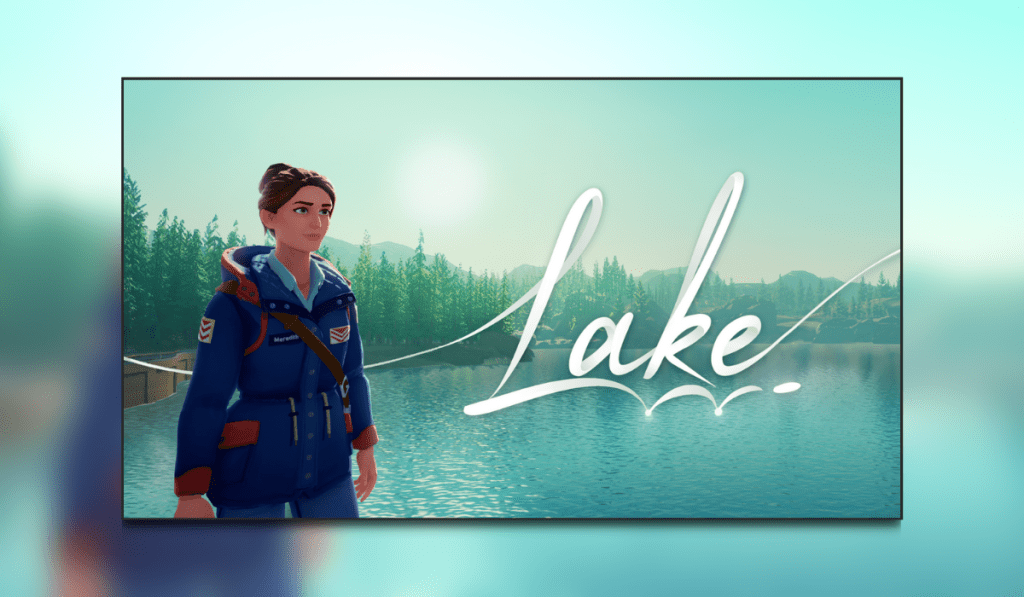 Lake is brought to us by the team of developers Gamious from the Netherlands, and publishers Whitethorn Digital from Pennsylvania. Lake was revealed in 2020. Available on Steam, Xbox One (With Series S|X optimisations), Nintendo Switch, And PlayStation 4. The game is out now on all platforms.

Lake – Who Knew Delivering Mail Could Be So Calming

I played Lake on the Xbox Series X for my review. Was it as calming as it appeared to be? Or was there a hidden agenda? Carry on reading to discover my full thoughts on this one. You can check out my previous review where I checked out Glyph here. You can catch up with me and the rest of the team over on our socials, which will be linked at the bottom of this review.

Set in 1986 in the small town of Providence Oaks. The player’s character Meredith Weiss, a 40 something-year-old female from the big city, is tasked with taking over her father’s mail job for a couple of weeks while her parents are living it up in Florida, nice. The player will be shown the ropes of how to, well, deliver mail. An old boy called Frank takes you around a couple of houses, allowing the game to show you the mechanics for delivering letters and larger parcels.

After a very short tutorial, you’re on your own. So what are your responsibilities for the 2 weeks ahead? Well, you deliver the mail while getting re-introduced to the people in Providence oaks. After not being here for 20+ years there’s a lot of people that have heard about your arrival. It’s very much a tight-knit community. The map is quite small and secluded with small sections it branches off at, which is where some of the characters reside. Each workday has the same map, just different houses you have to deliver to that day.

Driving your van around from place to place, you will either have to deliver a letter or a parcel to the marked locations. The letters are as simple as walking up to the point and pressing A (On Xbox). The parcels require you to go to the back of the van and select the parcel for the right address. The address will show up in the bottom left so you know which parcel you require. But don’t worry, the game doesn’t let you deliver a parcel to the wrong address, which kind of makes the process of selection a bit pointless. However, delivering the mail is the secondary part of this game in my opinion.

The main part of Lake is the story elements. Throughout your time in Providence Oaks, you’ll meet a few characters, some Meredith will recognise from living there previously, and some new ones. Characters will sometimes give you additional tasks to do during your workday, you can choose to accept or decline these. As far as I could see it doesn’t make a lot of difference to the outcome. Accepting them results in a new entry being added to your journal, which is accessed by pressing LB (On Xbox) and a new point will be added on your mini-map.

At the end of a workday, you will be engaged in story-like elements with one of the characters you engaged with that day, be it arranging a date, watching a movie, you get the idea. In my experience, the storylines were quite shallow and the characters were forgettable. Mostly everything you go through has no weight to it, and none of it affects the game or how your day progresses at all. There are some of the characters that options will affect, but the actual story part of it holds no weight, it all seems a bit hasty. Lake tries to capture the same story-based gameplay as Life is Strange in my opinion, but falls short in this effort.

Engaging with other characters happens when delivering them a parcel or letter. Sometimes they will be outside their property, other times delivery will happen as normal and dialogue will pop up. Throughout this dialogue will be where the player can choose to set up an after-work activity with them if they so choose. Declining these seems to have no negative effects as mentioned. Accepting them may unlock a new side-mission of sorts, where Meredith will help that character carry out a task. The side missions generally take place over a couple of days, and then everything is back to normal. I experienced only one instance where anything changed after the side mission. But, I won’t spoil that for you.

The graphical style Gamious has gone for here is what I would call a realistic stylized one. It’s not cartoony, but it’s not realistic either. The graphics are nice and crisp, no complaints here. The issue I do have however is the frame rate, it seems to aim for 60 fps on the Xbox Series X version I played. For the most part, it achieves this, with a few dips, but it has these odd stutters that are constant. I believe these issues can be fixed via a software update. But at the time of writing, this was my experience. There is also no animation for entering or exiting the mail van, the game just fades to black. An animation here wouldn’t have gone a miss.

The game’s audio is quite limited. Lake has very few sound effects to comment on. The player does have a radio while in the van which they can enable or disable with Y. I did encounter a bug with the van’s audio, in which the engine just wouldn’t have a sound at times. This generally went away after a cutscene. The draw distance was a bit of an issue on times too, where things would pop in or pop out. The worst example of this is driving through the forest area, the foliage would disappear 2-3ft in front of the van constantly. The Series X is more than powerful enough to keep this on screen. I don’t know why it needed to be unloaded so quickly.

It took me about 5 and a half hours to do everything Lake has to offer. The game is a casual one so this is fine. But aside from maybe replaying it again to get all the achievements, there isn’t a lot of replayability on offer here sadly.

This is a fine game for people who want a basic story, and no pressure while playing, which this does well. You have no timer on your day, and missions will not expire. The game itself is good to sink a few hours into. But that’s all it is, there’s nothing to keep the player coming back for more.

While having potential, it falls short in my opinion. This is why Lake will be getting the Thumb Culture Silver Award from me. There’s not enough content here to keep the player interested long-term. While there are story elements to it, they’re pretty shallow and the only impact they have is on the outcome of the main story. I will leave you with the game trailer as always.