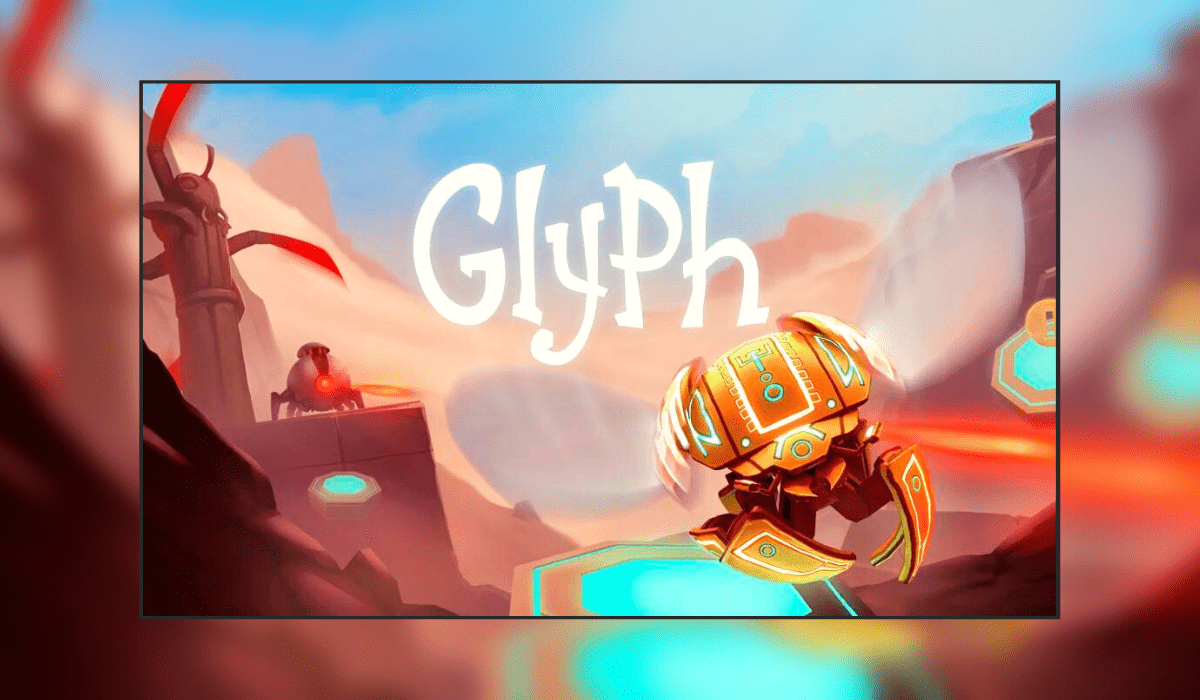 Ever wanted to roll around temple ruins solving a mystery as a scarab that turns into a ball? Awesome, have I got a game for you. Glyph coming at us from publisher and developer Bolverk Games is a puzzle/adventure game with a lot of precision required.

Launching August the 9th on PC (Steam) and Nintendo Switch for only £17.99/$19.99 this really is a game you should have in your collection. You will have to navigate levels that become more difficult as you progress. I’ve been playing it and I have a little bit to share with you before the game releases. Now let’s move on and get to the details. If you enjoyed this review you can check out my previous review for Deaths Door here, I would highly recommend checking that one out too. As always you can catch up with me and the rest of the team through our social media links at the bottom of this review.

Glyph – Easy to pick up, hard to master

I first saw Glyph when it came into our offices for review, upon having a quick look at the gameplay trailer provided to us I knew I would have a blast with this one. With its platforming and collecting nature, it was definitely a game that interested me, I’m definitely one to enjoy collecting everything I can in games to get that sweet 100% completion. You will find yourself frantically clicking and gasping your breath as you may daunting leaps across the environment with this one, but loving every second of it.

Glyph starts with a fair-sized scarab called Anobi awaking you, telling you that you have to find the lost temple of Aaru, hello to you too! After this brief introduction to Anobi, and a brief outline of what your goal is you’re thrust into the tutorial. The good thing about Glyph is it introduces one ability at a time to ease you into everything you will need to soar through the upcoming levels. First of all, you will be shown how to roll around – pretty simple stuff. Next, the game introduces you to the jump, the glide, the double jump, and finally the smash. You will complete a small level per ability. So you have a bit of time to get used to the new ability before continuing.

Upon completing the tutorial levels you will be placed into the games hub-world. This is where you will access everything from here on out. Anobi will give you a brief introduction on what to do here then leave you to it (until he pops up in levels). You will have 2 different types of levels to choose from, exploration and time trial. In the exploration levels, you have to collect keys to open the exit, pretty simple. You will also have gems, coins, and an avatar to collect per level too, which makes the levels a little more difficult. In the time trial levels, you have to collect the keys to open the exit in the quickest time you can. There are 3 tiers of times you can obtain in these, each tier rewarding the player a gem, get the top spot, and get 3 gems, neat.

The coins are used to unlock new exploration levels. The artifacts you find in these exploration levels are used to unlock new time trial levels. Now the gems you can obtain from either level unlock more of the hub-world using “Gem Locks” you will find at the edges of the hub-world. You can unlock these in any order you want, there are no rules to which order you complete the levels, which is nice to have that level of freedom. Stuck on a level? Don’t do it, go to another one and come back to it. If you manage to collect everything on the exploration levels or get the top time on a time trial level, you will be rewarded with an avatar or trial respectively.

Now, on to how the game feels. The controls are a little bit floaty at first, but you will soon get to grips with them. You will need to use all the abilities you were introduced to in the tutorial levels to make it through. Dying a lot at the start of your adventure is a given. but stick with it. Before long you will get used to the controls and be flying through the levels, making daring jumps across the environment with every bit of confidence you will stick the landing. Glyph is an intuitive game as far as physics goes, you will soon figure out how to control your momentum so you don’t overshoot a jump and go flying off a platform.

Glyph has simple graphics that suit the nature of the game very, very well. There’s nothing too fancy here but there doesn’t need to be honest. It ran smooth as silk on my PC, I encountered absolutely zero frame skips or slowdowns. When fluid gameplay is what you need for a game like this it’s very nice to have that. Support for high refresh rates is present here too. There’s a nice soundtrack to accompany you through the levels, with some nice sound effects also. The audio in Glyph is crisp and clear.

With 80+ levels with lots to collect you will be occupied for a while. Even if you breeze through the levels doing the bare minimum you will have a fair bit to do. If you choose to collect everything you may be in for a long, long time. Depending on your skill level and willingness to collect everything in each of the collectible levels. And if you choose to go for the top spots on the time trials. I hope you’re ready because that is going to be one hell of an undertaking.

I had Glyph on my radar as soon as I saw it. I knew it would be something I could get stuck into with a nice challenge. It did not disappoint at all. The level of entry difficulty-wise really isn’t that bad once you learn the controls and how the physics work. It’s mastering these controls in order to collect everything and beat the top times that will keep you coming back for more. I give Glyph the Thumb Culture Platinum award. There’s not really anything that needs changing with this game. It’s simple at its core with a lot of longevity. It will keep you coming back for more until you’ve beaten that one level. I will leave you all with a gameplay trailer as always.