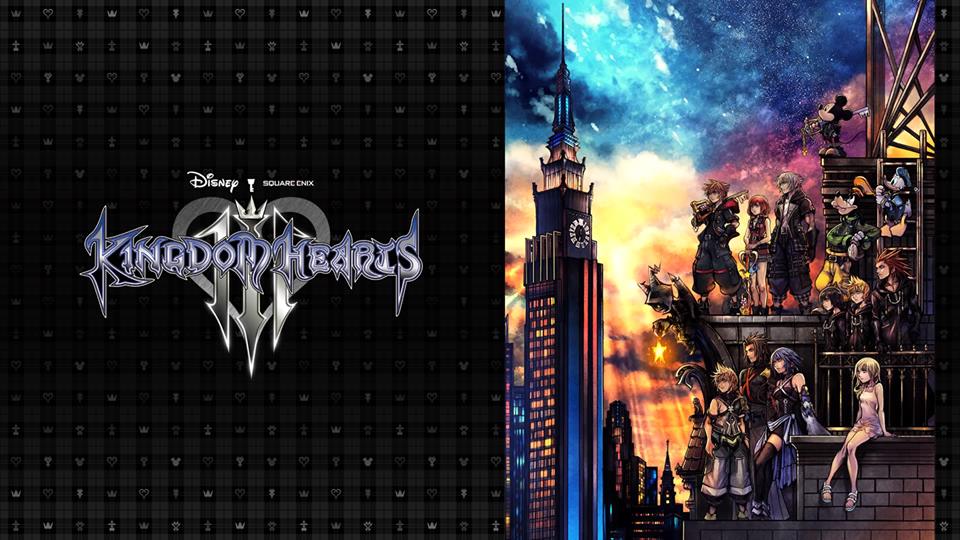 Kingdom Hearts 3 is the latest in a line of releases from Square Enix, and the first completely new full title in the series since 2005. Being completely honest, back when the first game was released in 2002, I was just finishing up my A-levels and heading out into the real world, so I didn’t have much time for a ‘Disney game’ (or that was my mind-set at the time).

When Kingdom Hearts 3 was announced and the buzz around it started to happen it intrigued me and resulted in me purchasing the PS4 HD remastered collection just before Christmas in a bid to catch up ready for its release (that and I had a feeling I might be doing a review).

I only managed to get through the first game, due to time constraints and other reasons, but it did make me realise that I should have given this series more respect and time back then.

Anyway, enough with the history lesson on me, and let’s get stuck into the review, needless to say after playing the first one, I’m hoping for something special.

Right off the main menu, the first thing I spotted was the Memory Archive. This is a nice touch for both previous players and newcomers as it gives you a quick overview of the story up to this point.

I will say right away though that if you haven’t played either KH1 or KH2 prior to this, then I highly recommend playing those first as even though I have only played KH1, the story is quite complex and this archive is just an overview.

Jumping right into the actual game and almost immediately I had that nostalgic feel of the first game, a few moments later I realised it was because the tutorial is identical to the first game (just looks a little better given the current gen graphics).

Now for spoiler reasons I won’t go into details on the story content/characters, other than to say that it definitely continues the Disney world’s theme and you’re bound to find your favourite characters here. There isn’t really any recap on the story as you’re playing. So, make sure you either check out the earlier games first (which is my recommendation) or if you’re impatient, visit the Memory Archive I mentioned earlier and accept that you won’t understand all of the story elements until you have gone back and played the others.

The control setup is fairly simple, but that’s not to say it doesn’t work well. You have the normal analogue stick controls that you would expect from a 3rdperson game with buttons assigned to Block/Roll, Attack, Action, Jump etc.

Mixed in with the basic combat buttons (attack, Block etc.) are special moves and target lock, but again there are no fancy combinations etc. it’s a simple single button push at the relevant time.

There a few nice new additions to Kingdom Hearts 3, they don’t revolutionize the game, but they certainly do enhance it and fit nicely with some of the newer characters. The Bistro is a great example of this where you bump into Uncle Scrooge and his little chef (that you will also recognise instantly).

In my opinion, this has been plucked from Final Fantasy XV as a way of giving the characters certain boosts by cooking and it definitely wouldn’t be a surprise if this was true as they’re both made by Square Enix.

Another new addition (which again feels very Final Fantasy XV-esque) is the Gummiphone which on top of keeping track of all the bits and pieces and stats through the game, also acts as the camera for you to take pictures.

One quick hint… Make sure to point the camera at as many of your companions as possible, they all have unique reactions 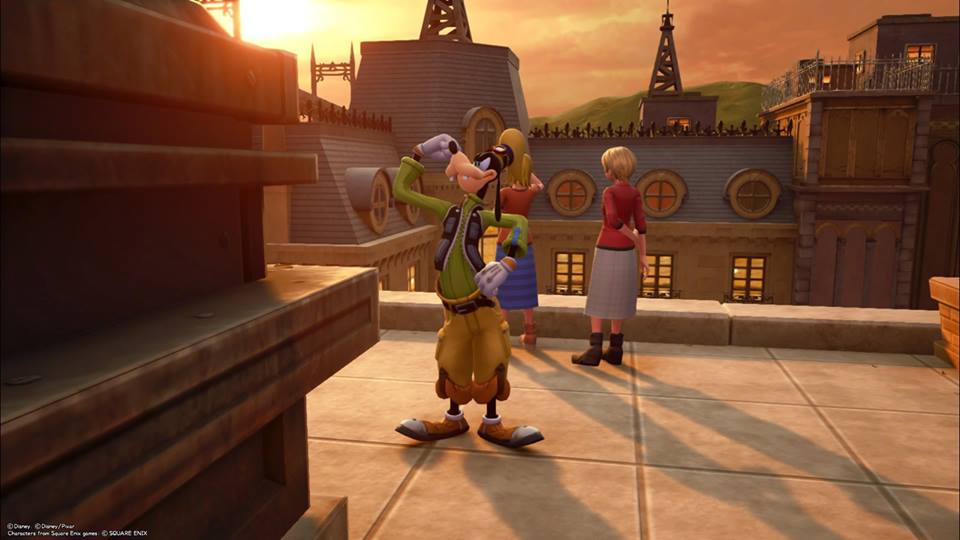 The Gummiphone also has its own mini games section which include a selection of games that you pick up while on your travels, these are based around the old 80’s handheld games that I’m sure most people will recognise as soon as they see them.

Now there are a number of other small additions and things to keep you busy as you would expect from an RPG, I won’t spoil them as I personally found the surprise quite refreshing.

Overall, I think the gameplay is rather addictive, without really noticing it I have clocked up 8-9 hours in a single day. It’s a very nice enhancement on what was included in the original games and is definitely well suited to an RPG.

Visually, Kingdom Hearts 3 is right up there with the current gen titles. I suppose that was to be expected given the Developers and that it’s a triple-A title. I don’t think you can really appreciate the improvements that have been made here unless you can go back and experience the first games again.

As I mentioned earlier, I played the remastered version of KH1 prior to doing this review and it does make you sit back and just absorb how good the visuals are (KH1 doesn’t exactly look bad for a 17-year-old game).

I think one of the big differences here to earlier releases is that they have fleshed out the worlds, rather than just a small play area, visually everything looks expansive.

As with the previous games, the Disney Characters look exactly as they should, like they have literally been pulled from the Cartoons / Movies and planted in the game (yes, even the villains) 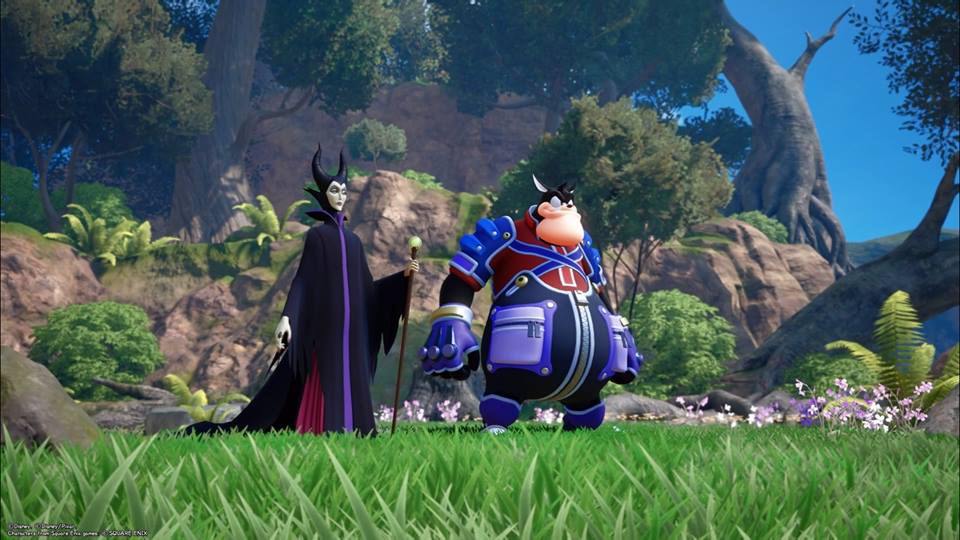 After approx. 18-20 hours of gameplay I can honestly say I haven’t noticed any frame skips or issues and I haven’t experienced any bugs at all which is rather refreshing given recent experiences with triple-A titles (Yes, I’m talking about you Red Dead and AC Odyssey).

There are some nice visuals for the loading screens, as though Kingdom Hearts has its own Social Media pages, with the classic Kingdom Hearts chessboard style background as well, makes the waiting a little less tedious 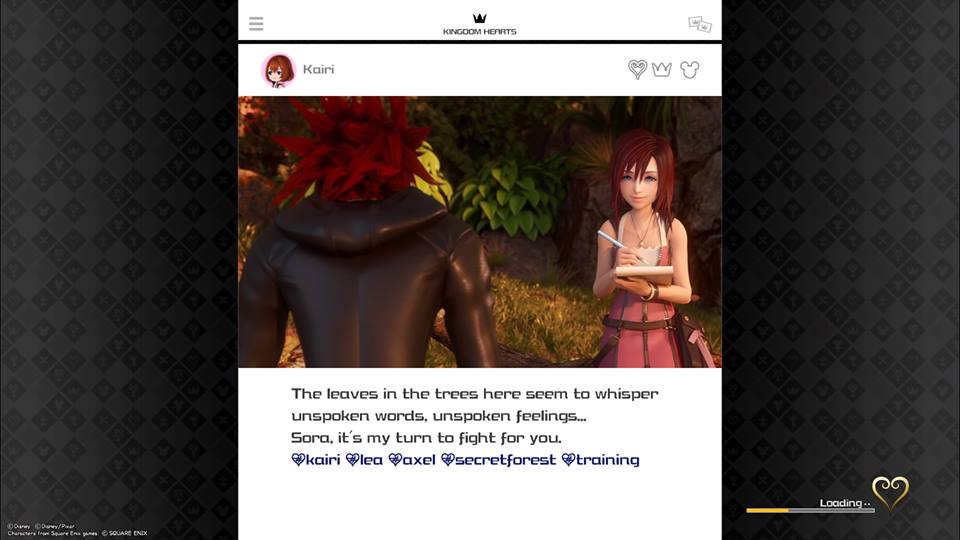 Kingdom Hearts has always been known for its excellent soundtracks and character voicing, then again with a character list like this coming from Disney it’s hardly surprising. Here is no different, I could happily sit and listen to the music without playing the game and I’m very tempted to see if I can purchase the soundtrack to do just that.

The character voice acting for the Disney characters is spot on as normal, however personally I found Sora and a few of the other Kingdom Hearts Specific characters don’t seem to be quite on that level and at times it felt a little cheesy.

I have put the game audio through my surround sound as well as through headphones when playing late at night (dedication to get this review done). I will say that if possible headphones are definitely the way to go here, I don’t really know why but there seems to be a little something more immersive about having Donald Duck screaming in your ear when you annoy him which you don’t get by using speakers.

The average completion time for Kingdom Hearts 3 (that I could see online) is about 25 hours. This is based around completing the main story only and on a lower difficulty level, I’m currently just over 20 hours in and I’m nowhere near full completion (with all collectable etc.) so there is definitely plenty to do here.

With that knowledge, I would say total completion on average could take you well in excess of 40-50 hours gameplay, possibly longer on the higher difficulties.

For anyone interested, the platinum trophy appears to be very achievable if you’re prepared to put the time into finding everything and grinding out combat. There is no need to complete the game over and over again on different difficulties which is something I hate with trophy hunting. Let me pick which difficulty I want to play on and don’t penalise me for it.

Do I see it being replayed? Definitely! I know I will play it more than once, and I’m almost positive that any kids playing the game will want to go back over and over again to visit their favourite Disney movie characters and worlds.

It’s a little hard for me to answer the question ‘does it live up the hype?’ as I wasn’t really hyped up for the game until just before Christmas, so I haven’t had 14 years of waiting to compare it to.

That said, it’s a very polished game that is incredibly fun to play, and a game that has no loot crates or microtransactions (at the time of writing this review). A very big plus in my book (as I’m sure anyone that’s read my previous reviews of certain games will know).

There is almost nothing bad that I can say about Kingdom Hearts 3. In today’s gaming world, I think that is rare and a testament to the effort put into it by the Square Enix guys.

Anyone looking for a family-friendly adventure game to enjoy really needs to check this one out (and play the previous releases as well).

Kingdom Hearts 3 whole-heartedly deserves the Thumb Culture Gold Award.  A very good start to the year, let’s hope this standard continues for the rest of the year.

Disclaimer: Like 95% of other reviewers, we had to purchase this game with our hard earned cash.