Ever since Kingdom Come: Deliverance by Warhorse Studios had been announced it was well and truly on the radar here at Thumb Culture, and after finally getting our hands on this ultra-realistic medieval RPG we are happy to report that overall its a great game with a few frustrations. Read on to find out…

So the RPG elements of the game work pretty well, essentially the more you practice a particular skill the better you get at it. So if you want to be better at sword play, then head down to battle arena and get practicing.

Having a focus on realism in Kingdom Come: Deliverance gives it a few unique features that you will either love or hate. One of which is the lack of cross hairs if you use a bow and arrow. Now this makes each shot you take count, and again as with the sword play, the more you use your bow taking out wildlife the better your skills. Now bettering yourself in different areas does have a point, early on in the game I took on a member of the nobility in an archery contest, after I won I received the prize of a much better bow than I was currently using. However, the bow would have to sit in my trunk waiting for me to get to a particular level in that skill, these little elements are a great touch and give the game an extra nod towards its aim of being realistic. 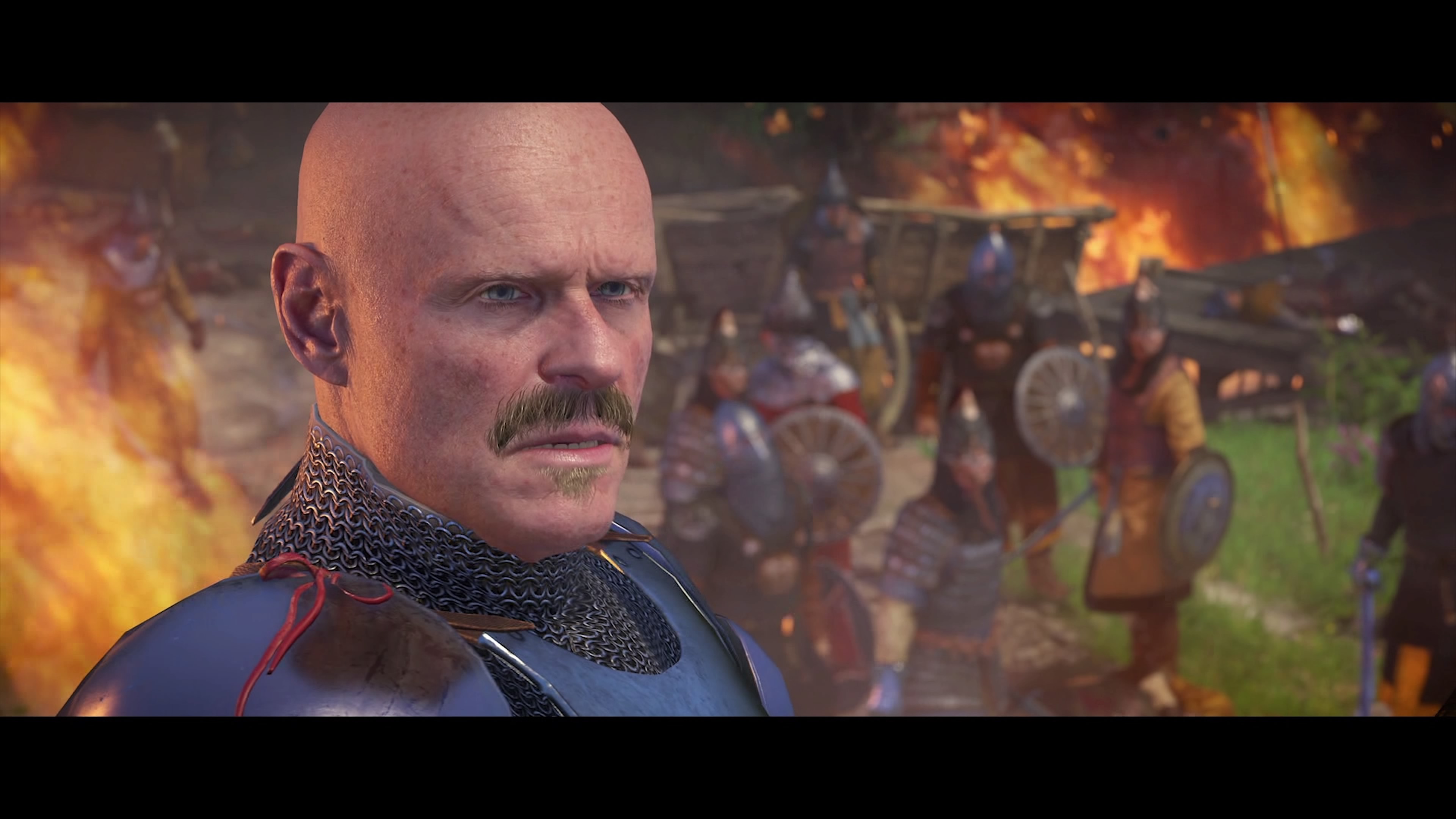 What you looking at?

Moving on from the RPG elements and there are a myriad of different places to spend your time improving, we come to keeping your character alive. Kingdom Come: Deliverance and its realism definitely shows signs of a great RPG here, if you are hungry you eat, thirsty? have a drink, I know these are standard kinds of gameplay elements on most RPG games, but in this case and something I haven’t come across a lot of is over eating. Yes, you can gorge on food, feed your face until you literally cant move. Its a neat little touch, although not best experienced if you are about to go into battle.

Lets move on to that open world, its massive and beautiful, there are beautiful castles, massive fields, towns and forest galore. With random NPCs strolling around the whole map. The map itself has a rough area of around 16 square miles, which is pretty big if all you have to travel around on is a horse. Heading into one of the towns you are greeted with a number of places of interest, from the taverns to traders, you can buy food and supplies for your journey.

So who are you? Well you take control of Henry, a Blacksmiths son. You take control of him and take him through a massive life event which leads to an epic journey. The storyline isnt going to win any Oscars, but its executed very well, yes its predictable, but in all honesty, its a story of revenge so what else would you expect. Kill the odd person here, take on bigger and badder people and try and kill everyone. Without giving away any spoilers, which as you know is what we don’t like doing here at Thumb Culture it really is as simple as that.

Lets take a little peek at the sword play elements, because you are going to be battling quite a few people using that sword of yours. So when you are in battle with someone, you can lock the camera and then you are given a modified crosshair which shows 5 areas, head, arms and legs, essentially. Now you can either stab or slash at each of these areas, and creating combos to take out your vengeance. It works well, although blocking can be a little tricky depending on how your reactions are, essentially one button blocks and if you time it right you can get the opportunity for a counter attack if you are quick enough. Also don’t forget to find a shield as soon as you can, this gives you a great chance at surviving your battles during the early hours of the game. 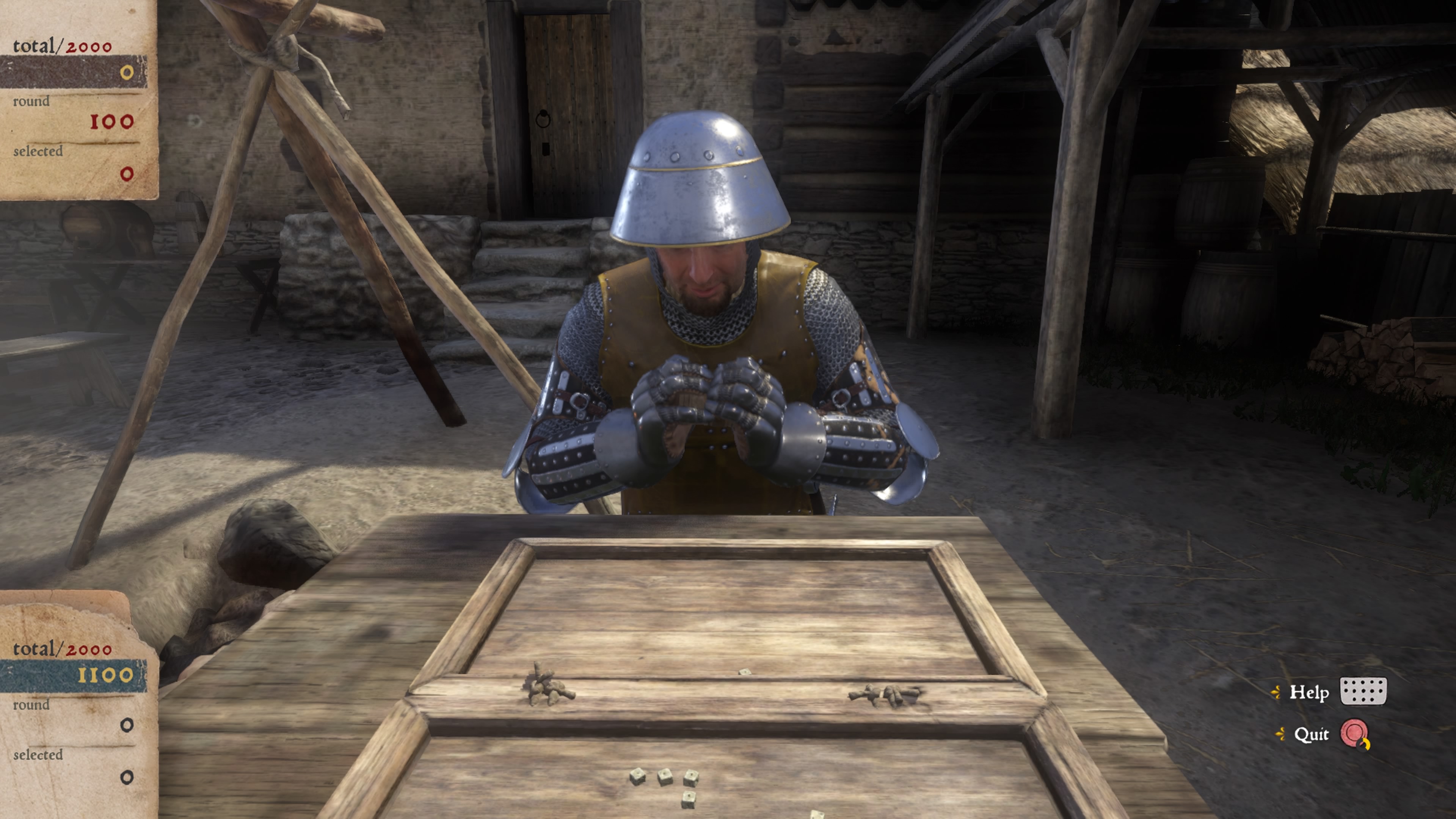 Time for a nice game of medieval dice

While you are controlling Henry throughout Kingdom Come: Deliverance you will take on a massive variation of quests, with some of them taking place at certain times of the day. This is a neat little touch that adds to the realism of the game. With its day and night cycle, you generally find that you sleep during the night and then all your activities are taken place during the day, however, you might have a particular side quest to go and talk to the fair maiden that helped to rescue you from a sticky situation. However, she works from noon onwards so you have to make sure that you go and see her before then otherwise you will miss her for the day. Its the same when you are meeting other characters in the game, they sometimes ask you to meet them at a certain time. Now this is both a great element and frustrating. One particular situation say me going on a hunting trip, now I was told we would go out hunting at first light. So I fed my belly and settled down for a nice 8 hour sleep to get my energy back. Waking up at 6am and the sky was bright and the sun was definitely rising in the sky. I gave sleeping beauty a nudge and was told that it was still dark! I mean, it wasn’t, it was definitely daylight and first light at that. These little guessing games get frustrating, but with the ability to skip time it does make it that little bit easier.

All these elements in Kingdom Come: Deliverance definitely give this a great and unique place in the RPG genre, all the while ensuring that the game is as unique as possible.

The graphics on one hand are brilliant, really detailed, but on the other hand they do fall flat. The environments are beautifully created, with the density of forests some of the best I have seen on any open world game. However, sometimes the textures can be a bit of a mixed bag.

I also like to give all games the puddle test. This is where I find a puddle and jump up and down to check for any splashes, unfortunately Kingdom Come: Deliverance failed this test. Yes it is only a small element of the game, but its a good indication as to how interactive the environment was. 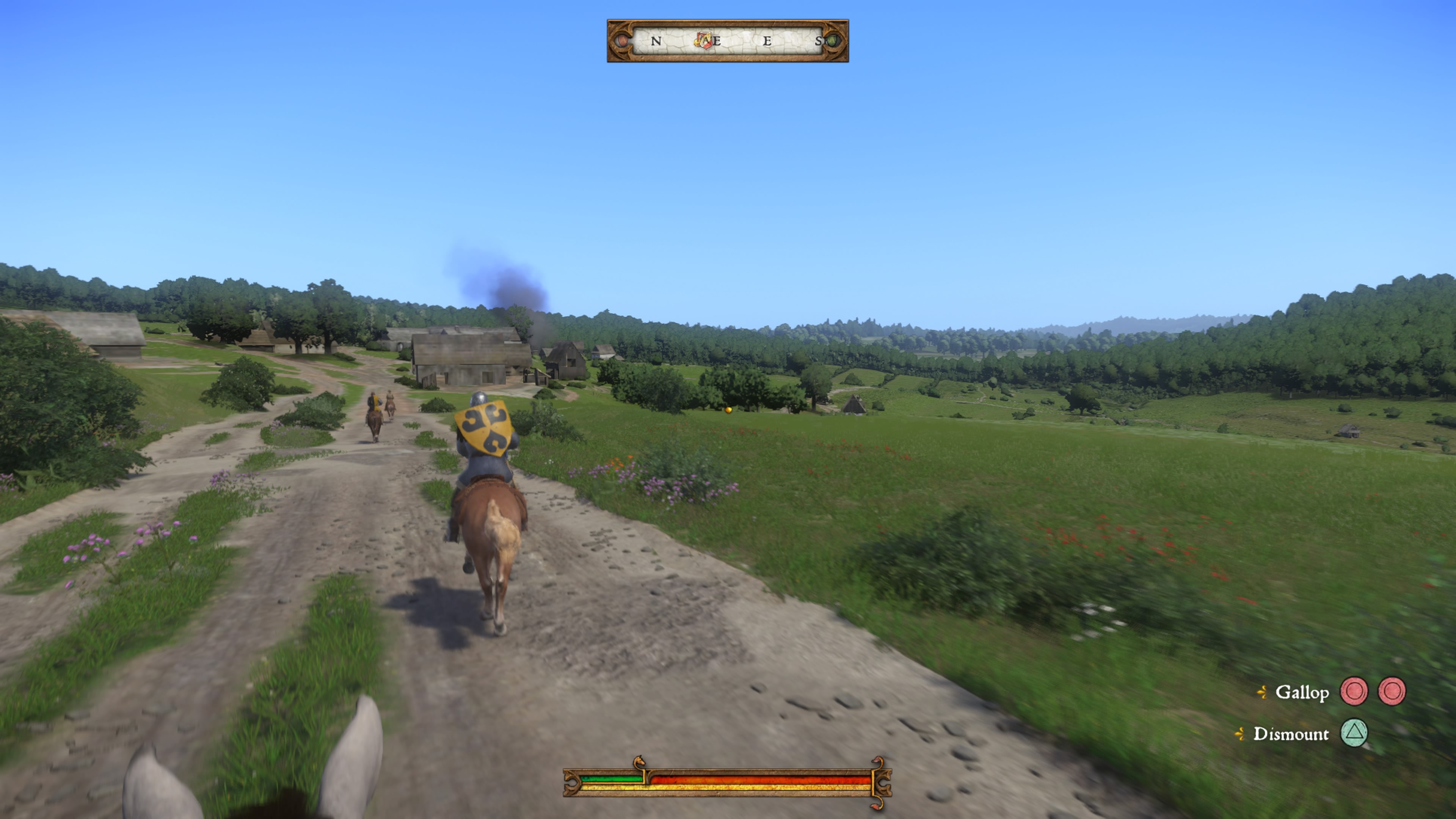 Rolling hills as far as the game will allow

Character models are good and realistic enough, however the lip syncing is awful. Its so mixed, one character will appear to be mouthing the correct words, then go and speak to another person and its like they have been dubbed over like some old kung-fu movie.

Sounds are one of those things that either help an RPG game or they can really ruin the user experience, especially with it aiming for historical accuracy.

Environmental sounds are good, you get animal noises, rustling around town, listening to other NPCs talking is often quite an experience, eavesdropping on their conversations can be quite humorous. 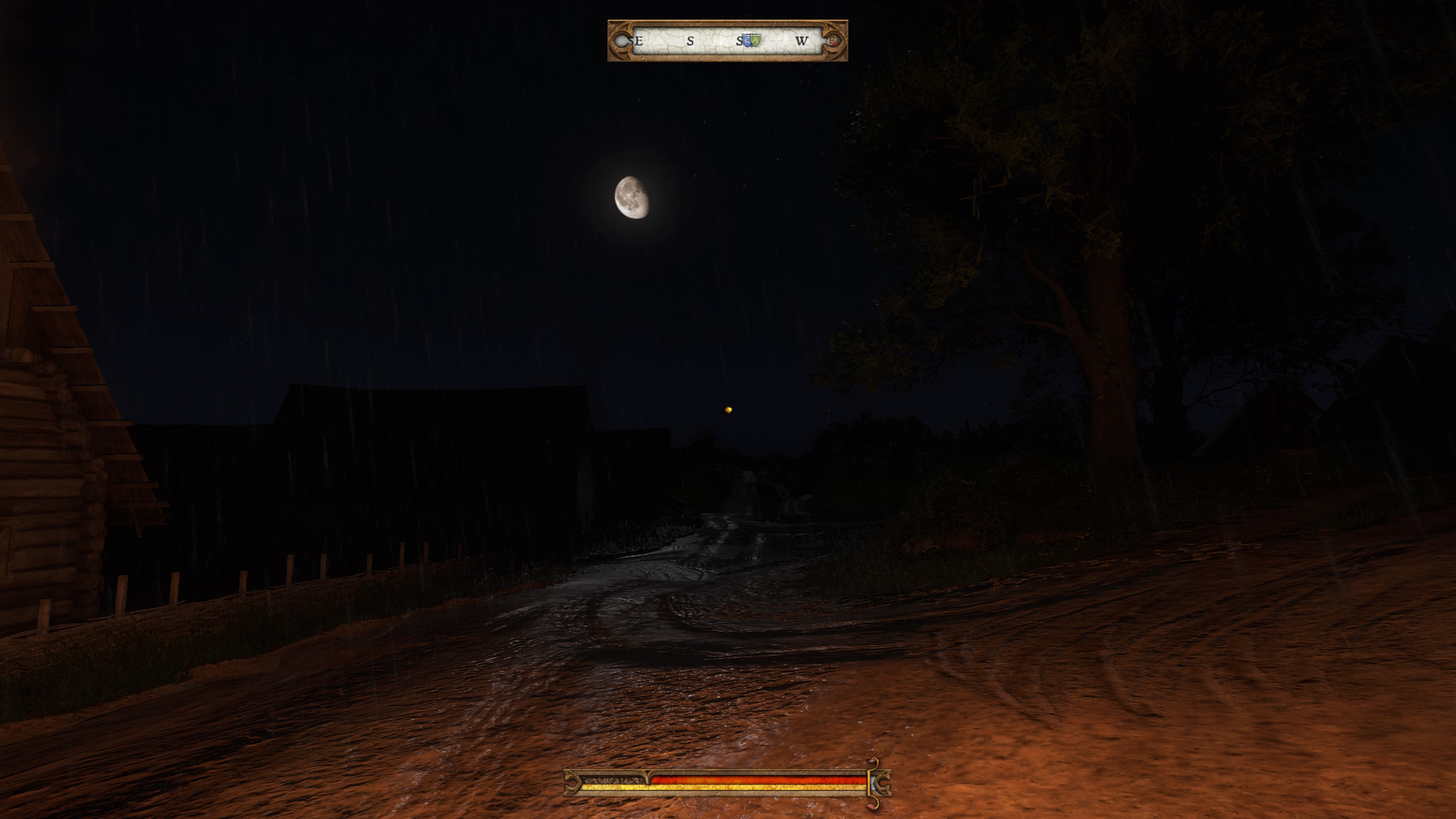 Different materials have different sounds, especially when you are trotting over them on your trusty steed, this is a top nod to the realism where the game is trying to aim towards.

Now with the game roughly taking around 30-50 hours to finish the story line alone, I felt that I just haven’t played through enough of the game to give a final review score. This is a great position to be in because on a personal level I don’t feel that the game has really started. Yes I have played around 14 hours over the weekend since receiving the review copy of the game, but I feel like I have only scratched the surface. This is a great position to be in especially with the amount of games that can be completed within 10 hours out there.

There is also so much more to put time into learning in the game, it’s as deep as you want it to be. Learning alchemy is no joke! 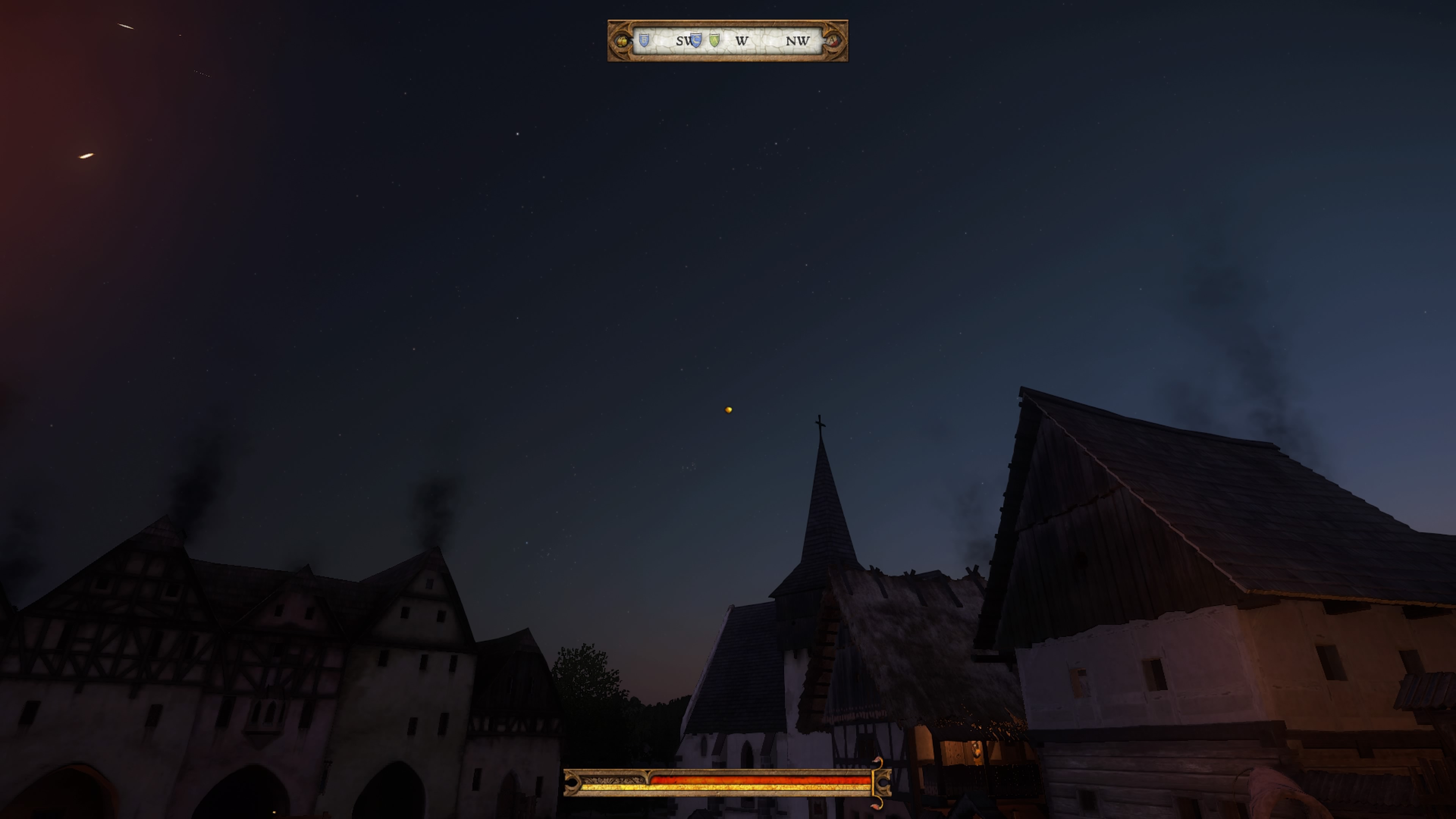 I can see Uranus

The gameplay is so up and down, yes it can be fun when you are on a specific quest, but it falls flat when you are having to wait around. With the added element of being able to just wait around and advance time it does make this slightly easier, but even still it can get frustrating.

I have spent a lot of time walking around and riding my horse between two points, going and speaking to this person and that, all the while progressing the story a little bit at a time.

I guess what you are reading this for is to find out if you should spend your money on this, and to be honest if you are a fan of RPGs and want a new challenge then this certainly is that. It isn’t for everyone and I think Warhorse Studios know that, which is why they haven’t shied away from making Kingdom Come: Deliverance such an original take on the RPG genre.