Fancy playing a massive open world hack n slash game set in China?  Well you’re in luck as publisher Koei Tecmo along with developer Omega Force have produced Dynasty Warriors 9, the latest instalment, and largest, of the Dynasty Warriors series.  Available on PlayStation 4, Xbox One and Pc, I have been fortunate enough to don my best samurai outfit and wield the largest sword I can find to bring you my findings young Daniel Son. 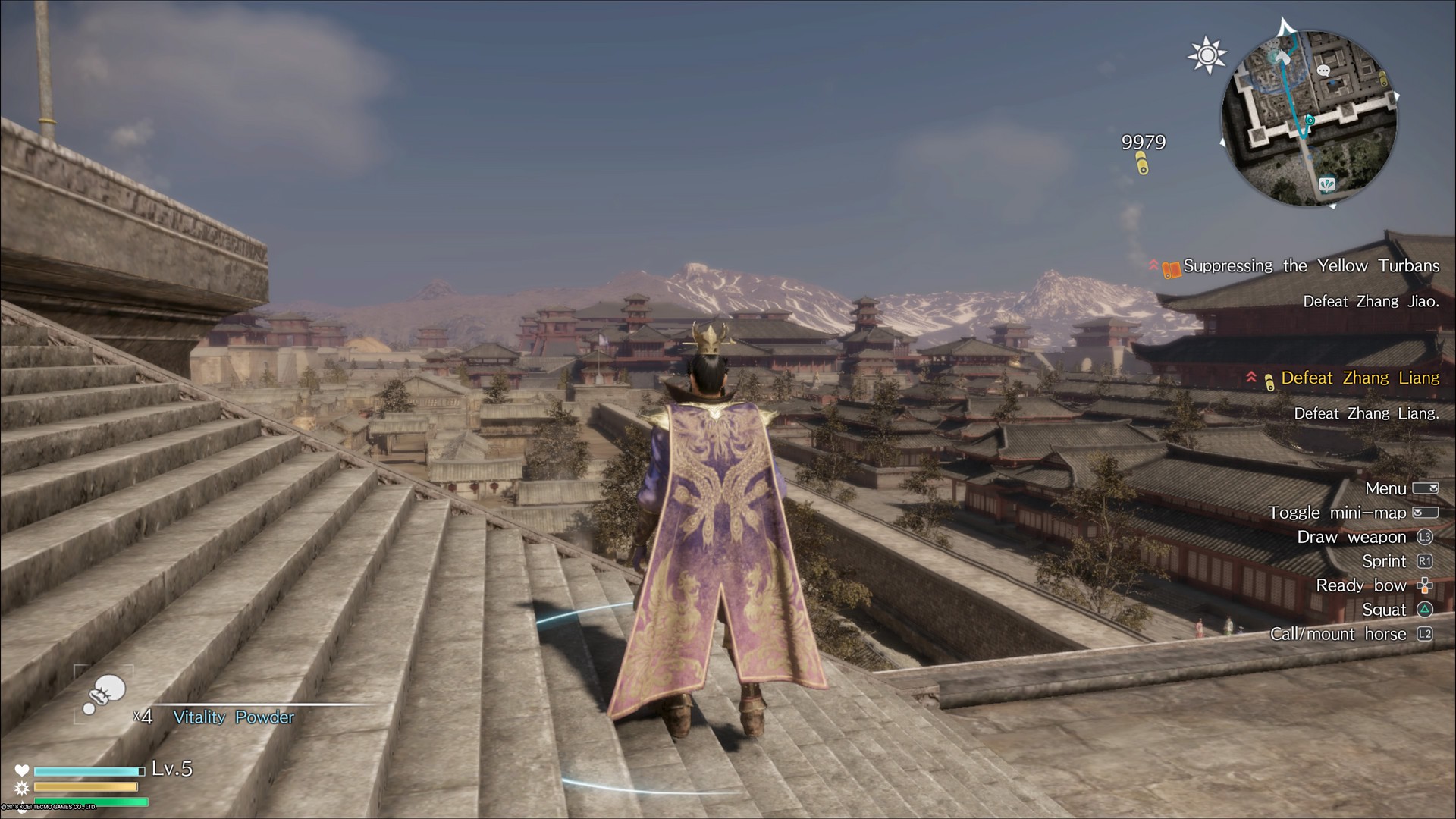 An impressive view, but what awaits outside the walls?

From the moment the electric guitar solo begins in the opening cinematic you can feel the hairs tingle on your arms as you watch Zhao Yun, one of the playable warriors emerge from the water.  As he rises up, armour parts connect to his body before he flies into the middle of a giant battle armed with a spear and begins his carnage tossing enemy soldiers everywhere.  The music is pumping as is my adrenalin and I can’t wait to start playing.  In the back of my mind I just hope that the gameplay is as good as the intro video!

There is a certainly a lot to take in, I won’t beat around the bush, Dynasty Warriors 9 is huge!!  From the outset there is a quick and simple tutorial that gives you the basics for combat.  There are the usual hack and slash hammerings of the buttons but on top of this is a new action combo system that uses three core elements; flow attacks, reactive attacks and trigger attacks, the concepts of these are taught to you during your first few moments, the good thing is that they are not hard to pull off and look awesome!  Flow attacks are quick normal attacks, mashing square, circle, etc on the game pad.  React attacks are based on quick timing and positioning within the battlefield to either counter an attack or repel a strike.  Trigger attacks affect an enemy’s physical state such as stunning them or throwing them in the air.  Once you have accomplished the tutorial it is onto the story chapters.

The story, set in China, is over 10+ chapters with the first being “Suppressing the Yellow Turbans”.  From the chapter selection screen you get to choose your warrior from those that you have unlocked from the various families; Wei, Wu, Shu, Jin and there is also a tab for “others”.  Each warrior has their own distinct story, personality and relationships that develop during the game.  In total there are 83 officers from the past Dynasty Warriors series to unlock with new costumes and a few new characters.  Already you can see how the amount of game time is going to be high in order to follow all of the warrior’s stories. 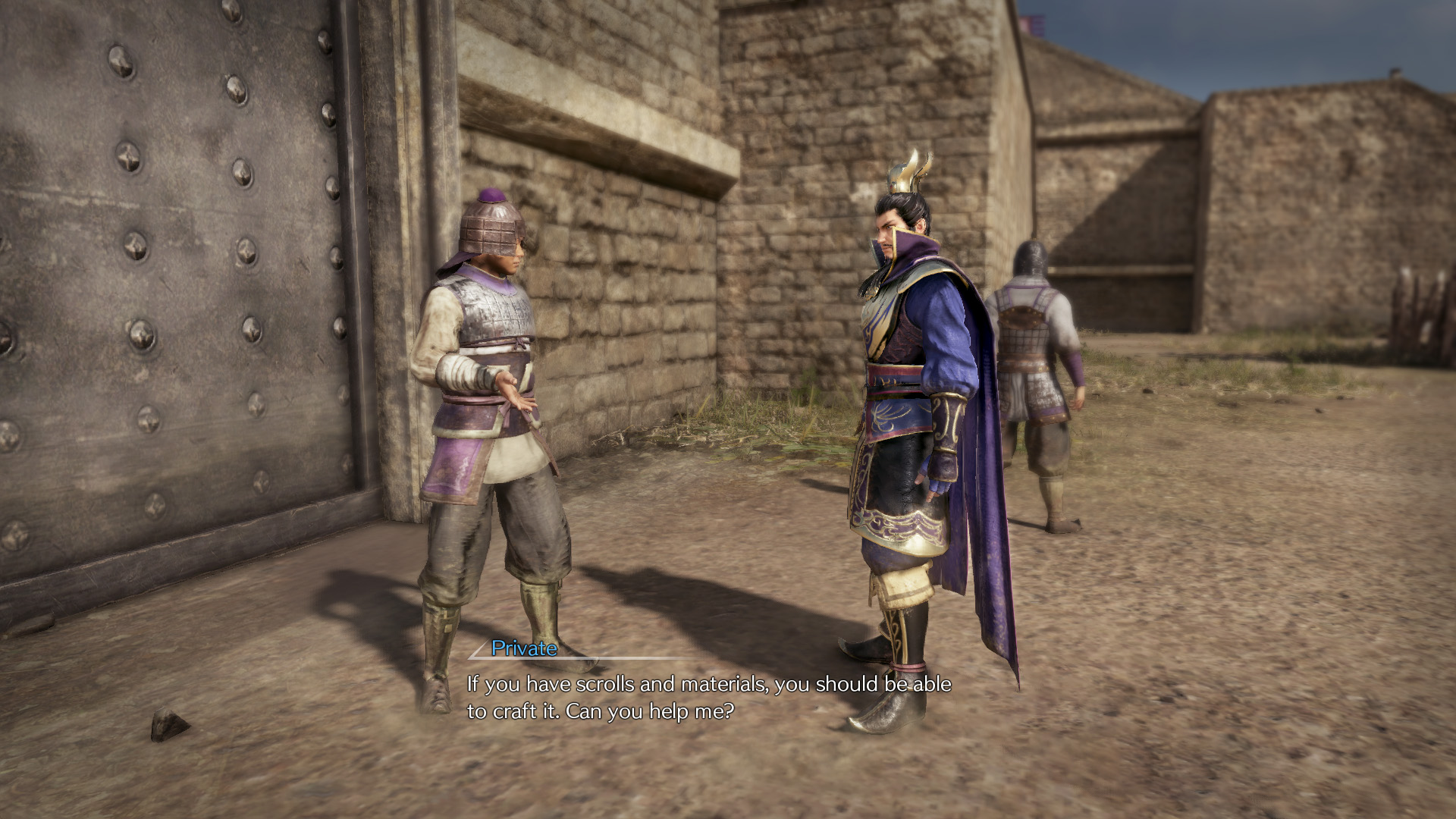 Love a good side mission? Well you won’t go short on them!

Arriving in a small dusty village you are requested to rendezvous with Xiahou Dun in a nearby villa.  A handy set of blue arrows appear on the floor to direct you to the latest task along with a mini map in the top righthand corner of the screen. As I make my way to the villa, passing villagers and guards offer an insight to what the current state of affairs are as you eavesdrop on their conversations, additionally you can talk to them resulting in extra information or even a tasty side-mission to earn a reward such as a scroll that will allow you to create a new item or a gem to enhance your equipment. 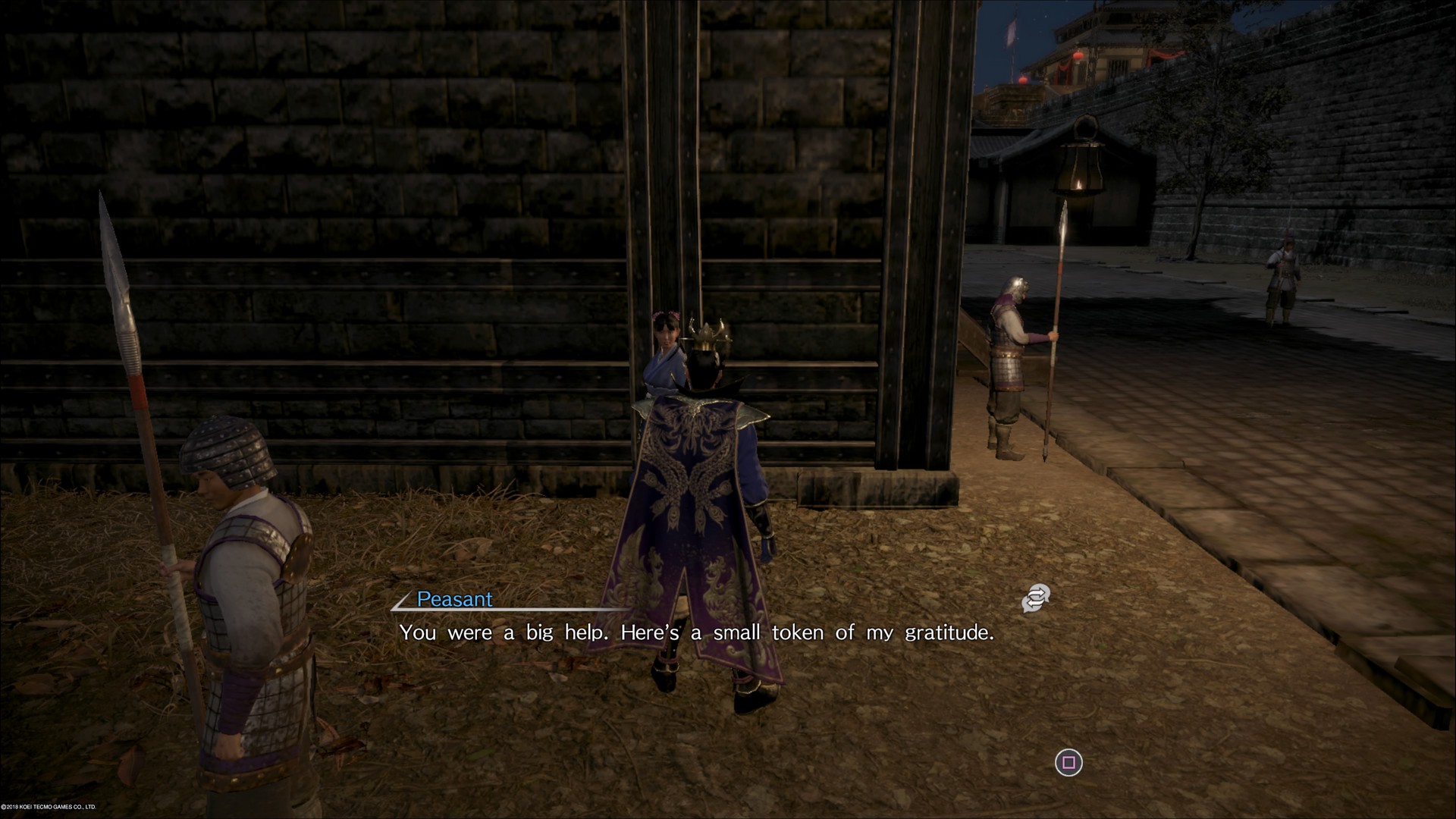 Where would we be without this classic line popping up in adventure games!

Helpful tips appear on the screen to slowly spoon-feed things that I need to know about playing the game, such as “to advance the story, complete objectives known as missions”.  Sarcasm aside, Dynasty Warriors 9 is perfect both for newbies to the series and adventure games as a whole.  Although the pop up help screens are simple to understand, there are a lot to take in and as you progress around the map.  Thankfully these can be recalled at any time through the menu options.

Like many open world adventure games there is an element of resource collection required in order to craft and upgrade weaponry, armour and items that you have unlocked via scrolls.  Resources are identified on the map when you are close by and are automatically collected as you travel over them.  Through the blacksmith found within villages the resources can be finally used to craft your latest bringer of death.  Gems can be crafted from the resources and are used to alter the effects of weapons either elementally or through enhanced stats.  If you do not fancy this approach then there is usually a shop within the village to buy from and equally sell to. 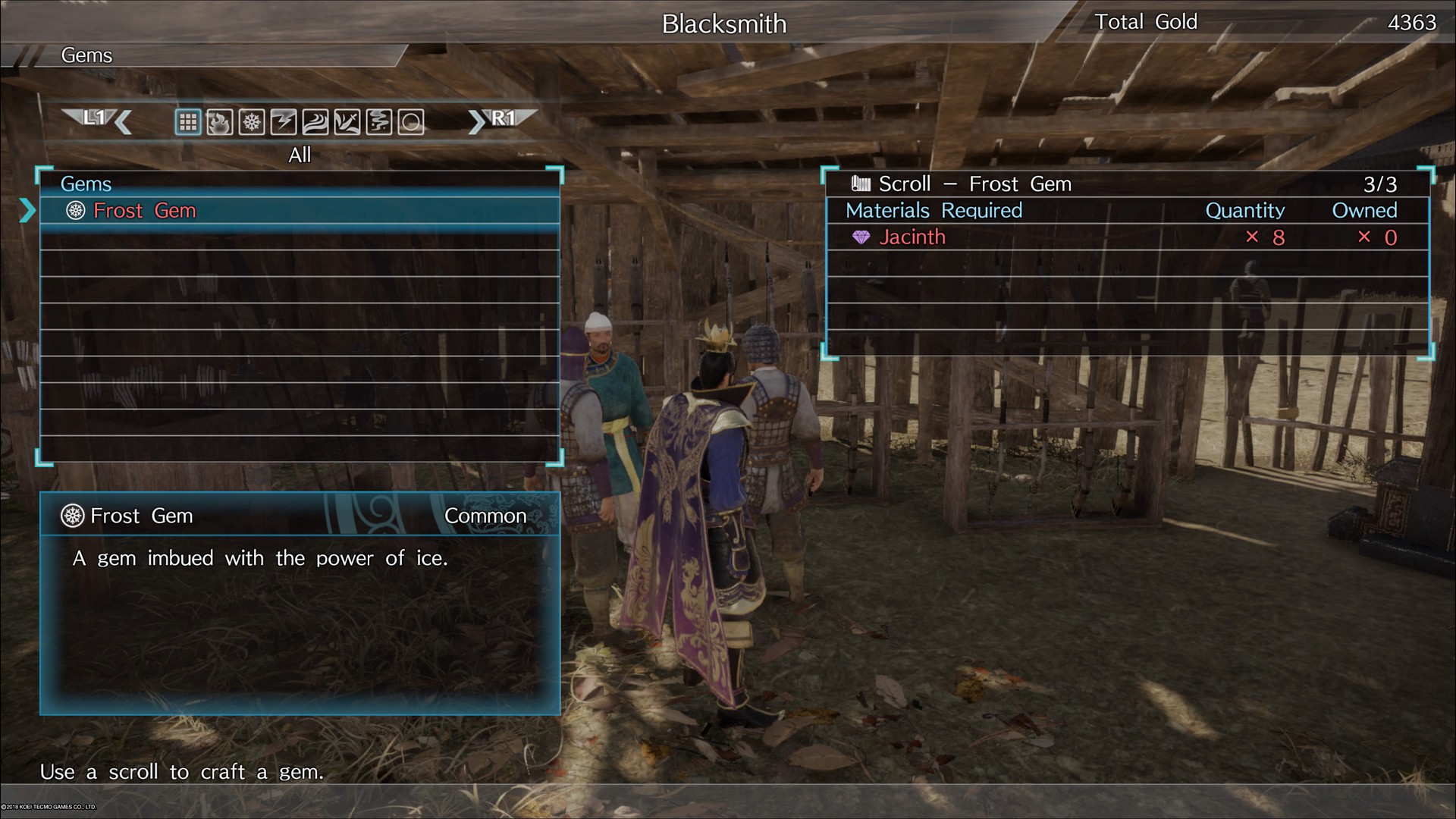 Frost gem, def not a funky ice cube in disguise!

The open world is large and it will take you a long time to explore.  To get around the land faster you can summon a steed at any time and travel in style to your destination on horseback.  Your horse can be upgraded via a stable and even sold if you want to purchase a different type.  If travelling on horseback is still too slow for you there is the ability to fast travel to villages and other discovered places on the map however you will forfeit the chances to collect any resources that you may have found along the way which could later on be detrimental to your next mission, especially if you need to craft a certain gem or piece of equipment.  There is certainly a good variety of terrain to encounter in Dynasty Warriors 9 from vast snowy plains, jungles, deserts to key cities, check points and monumental landmarks such as the Yellow River and Mount Song.

Combat is high on the agenda and can be found throughout your journey.  Not only have you got the main story missions to complete but there are optional side missions such as hunting rogue gangs and protecting areas of farmland that will reward you greatly with scrolls, money or resources.  While all of this is happening the map is a flourish of blue and red circles indicating areas held by friendly and enemy forces.  Where the two colours meet are battles which you are encouraged to join and help tip the fight into your odds.  Joining a fight allows you to plow through countless amounts of enemy as you swipe them across the field with your primary weapon, in my case a large broad sword.  As the captain is identified you can lock your target onto them and direct a volley of combos.

Holding R1 during combat brings up a quick selection display that allows you to access your trigger attacks such as launch, stun, special and knockdown.  The longer you hold down the accompanying button, the more charged up and deadly your powerup becomes.  Once you are fully charged, signified by a yellow flashing bar below your health in the bottom left of the screen, you can unleash your special move causing destruction all around you.  I quite enjoyed the flying shards of ice that speared into the ground wiping out all of the nearby enemy while using Cao Cao.  Equally entertaining is hitting the triangle button when prompted on the screen for a reactive attack.  The camera zooms in on the action and slows down as you either punish or evade your foe.

As well as your primary weapon you also have the use of a bow and this is initiated by pressing down on the game pad. The bow is perfect for landing headshots onto rival soldiers and the arrows can be upgraded to other types such as flaming or poison. 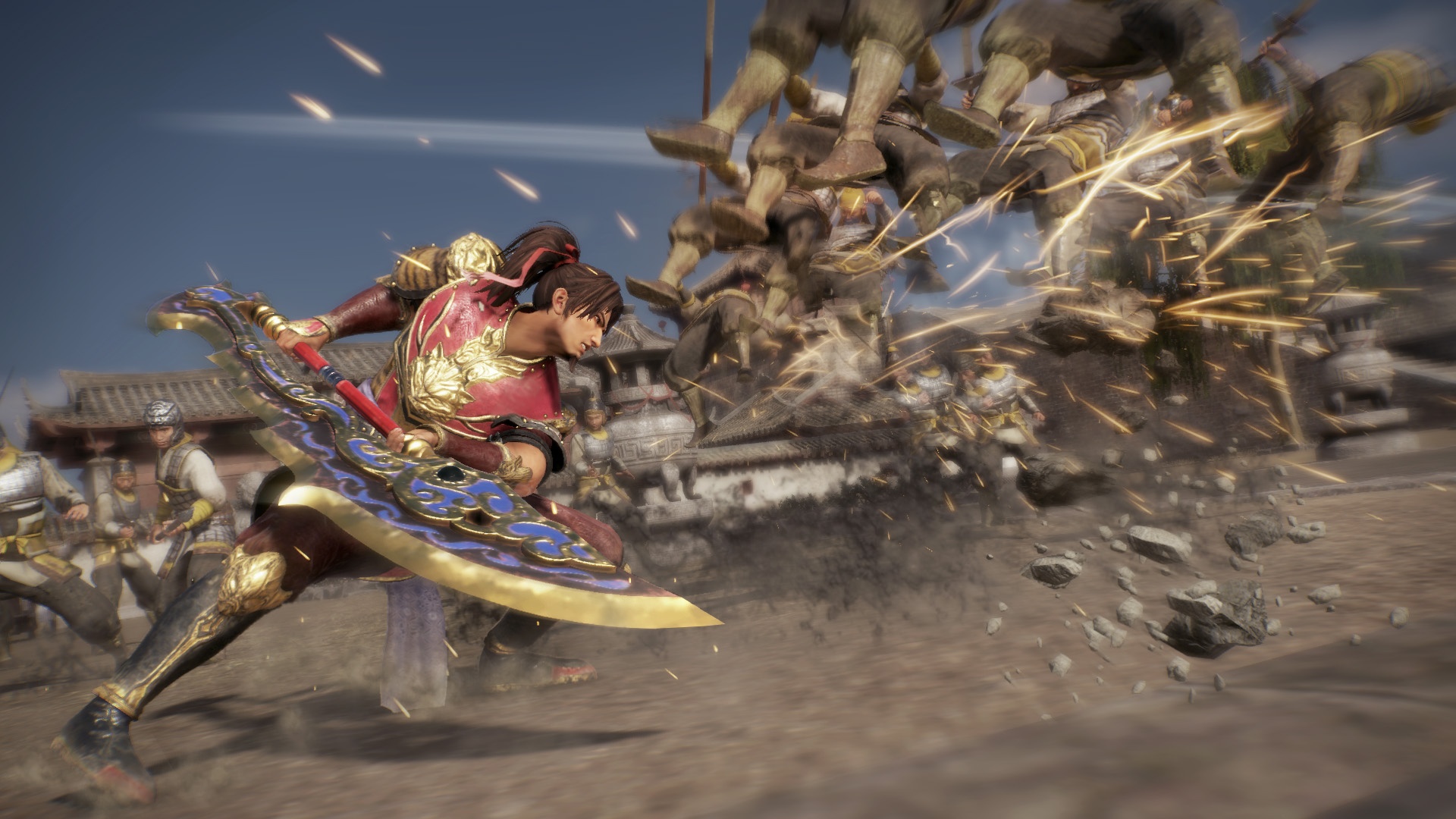 That’s one way to beat the queues on sale day!

Through completing side missions and main quests your character gains xp and upgrade points as they begin to level up, unlocking new abilities and equipment.  Upgrade points are a valuable commodity to help enhance your character’s individual stats such as strength and dexterity.

The interactivity within Dynasty Warriors 9 is good.  See a nice high wall and want to see what’s on top? Fire the grapple gun! See an enemy beside an oil barrel? Fire a flaming arrow and watch the explosion!  Throughout your exploration of the map there are no real restrictions or areas that are off limits, mountains can be climbed and rivers can be swum across.  During the chapters, other officers team up with you at times and you also have the ability to then play as them for some variation and different story progression.

Out of the main game you have the options to view your unlocked characters, weapons, movies, events and soundtracks via the “Gallery” option, perfect for showing off your progress to your friends.  Want to know more about the Dynasty Warriors world?  There is a handy encyclopedia that contains information surrounding the officers, battles and even the terminology used in the game. 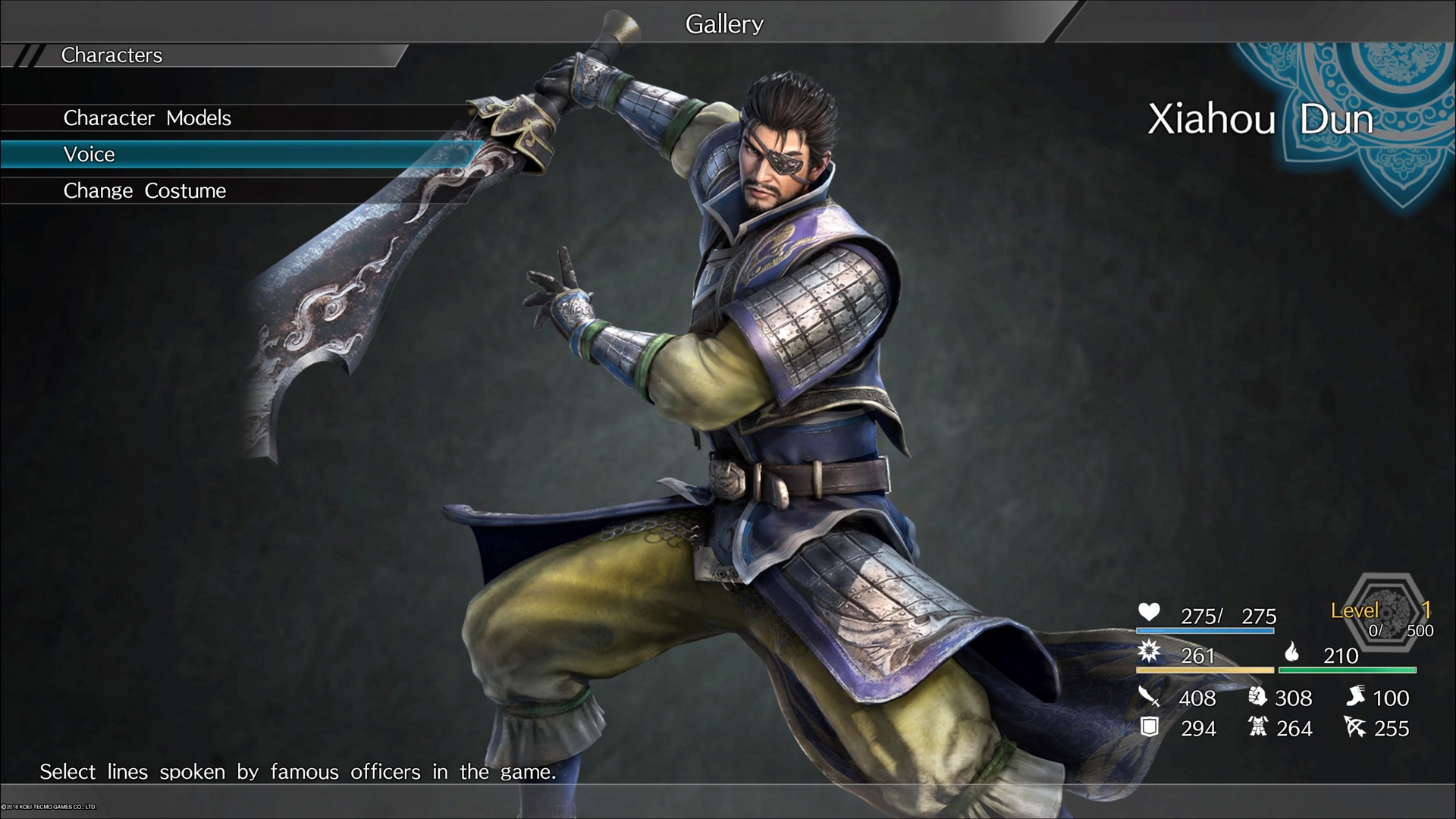 Show off your characters and listen to their odd American accents.

In short I loved the electric guitar soundtrack, especially the way that during combat it ramped up a notch however I was not a fan of the strong american voice acting.  When characters spoke to one another it just didn’t seem right during the dialogue especially when addressing them by name such as “Xiahou Dun”.  It just came across without any authenticity.  Shut your eyes and it sounds like a wild west movie.

The movies look great and there is a lot of attention to detail especially with the characters and weapons however travelling around the map just seemed a little bland and dull.  Very soon, villages, trees and grass all look very similar and dare I say, boring.  Yes terrains do change and yes there are some amazing vistas to explore but compared to other open world titles something just didn’t sit right.  There is a slight haze to the graphics which may not of helped, I’m not sure if this is to give the game a greater feeling of depth when looking around through greater drawing distances, which is achieved, but is to the detriment of colour and clarity. 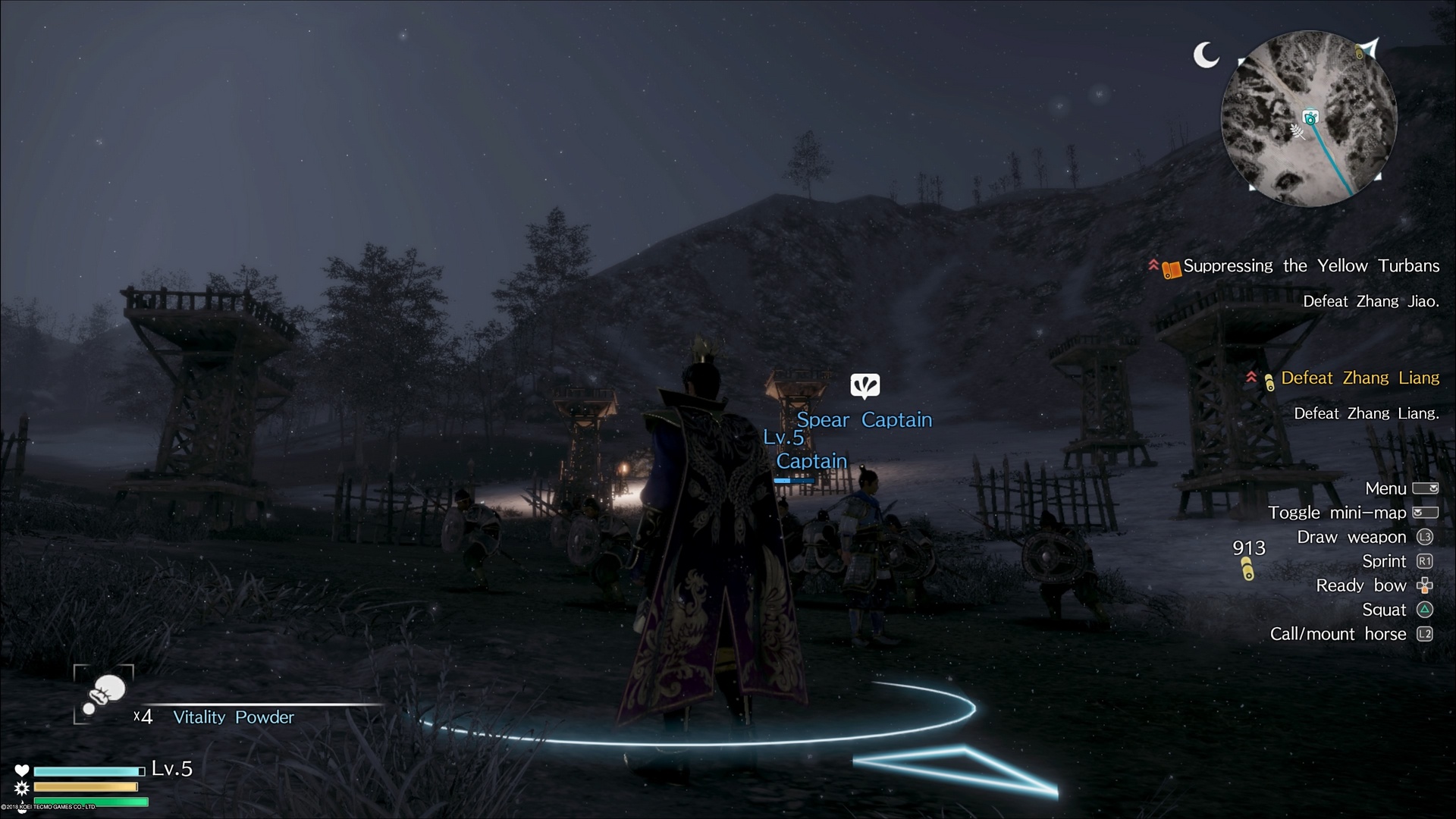 The screen is always full of helpful information come day or night.

If you have a lot of time on your hands then this is a massive game to get stuck into.  The storyline is well crafted and offers a lot of different outcomes depending on your choice of character and the way you decide to progress.  Combat is more suited to the hack and slash genre however the new attack combo system offers some awesome variations in attack and defence to keep you on your toes and score that high numbered chain attack.

There are a lot of elements to Dynasty Warriors 9 that need to be learnt in order to get the most from the game however via the helpful guide that can be brought up at any time you can quickly become a master, atleast in the knowledge department!

From my point of view I am a little disappointed that having gone into so much detail with the Far Eastern setting via the story, scenery and characters that the american voice acting just seems so out of place.  Would it of hurt to of had some Chinese English speaking voice actors to atleast give some authenticity to the narrative?  On the flip side I guess if you watch anime it usually has an american dub over the top, so maybe I’m just being picky.

Needless to say I’m in awe of the size and complexity of Dynasty Warriors 9 and therefore award it a Thumb Culture Gold trophy.

Disclaimer: We received a review code to complete this article. Many soldiers were hurt in the process.