Released on April 19 and sneaking onto PC everywhere is board game turned turn-based RPG For the King. After spending some nights in the soft glow of my computer and accompanied by two friends to help in my journey I bestow upon you the reader a tale of rage and laughter. This is my review of For the King. 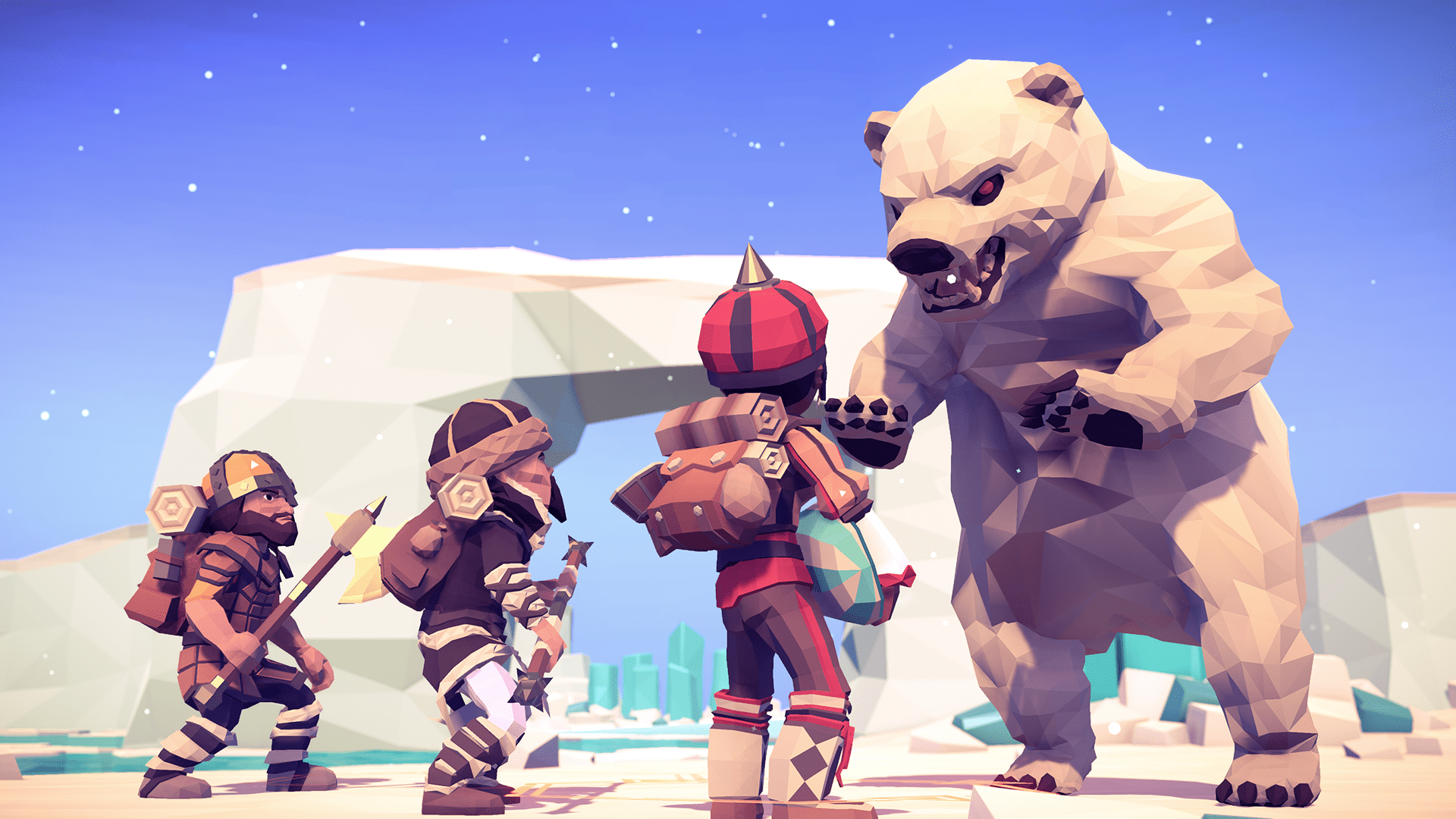 Can BEARLY contain my excitement….sorry had to be done.

For the King takes you onto an adventure in the land of Fahrul. The game takes you on a journey to restore peace to the land after the king was murdered by an unknown assailant. You explore the map in a party of three whither that be with two friends, two online strangers, or you can control everyone. This game is a rogue-like joy ride across a hexagonal map. You start with a choice of three modes. The main story campaign, an endless dungeon run, and the latest map which is a frozen tundra. Once you choose your campaign you have your pick of four different classes; each with different abilities and starting equipment. You can have between one and three members although I strongly suggest having all three because this game will not ease you into anything and you better bring you’re A game as well as a healthy dose of luck.

May the coins be ever in your favour. Cause if not you will die.

I’d like to say I went into this game with all the power and abilities of a seasoned veteran of RPG games, but, I died real quick. As my friends and I began our adventure in the main campaign I went with the support class Minstrel. Using the power of friendship and a sweet D chord I was hoping to carry us to victory. Unfortunately once we began our first go round into a dungeon I got hit a lot. The battles and movement are both turned based and your success in either is based on the luck of the coin flips. It’s either a fail or a pass and different stats effect how many you get. Every new weapon you acquire grants new abilities like freezing or stunning an enemy or doing a sweep attack hitting everyone. You are given four revives on the easiest setting. Once those are up and you die you stay dead. It makes you think and plan your moves.

We learned quickly that working together plays a huge part in For the King. I decided that exploring was important and decided from the first turn to go my own way. What I didn’t know is that when you are too far away from any other characters that you fight battles on your own. I died at the hands of three crows that proceeded to crit-hit me for everything I was worth. This game doesn’t hand you anything and even on the easiest setting there was a learning curve. Each failure lead to more knowledge and made us more carful on our next steps. I ended up fighting in one of the random events that pop up all along the map. The fight was me vs another minstrel. It was hilarious as our attack animations where just different guitar riffs. Once I defeated the other minstrel by playing some sweet licks I earned his guitar. It was a huge upgrade and I was so excited. What I didn’t bother to see or read was that weapons can have additional information about them. Mine happened to be if I failed an attack my weapon would break. With only one coin animation to use I would have realized that every attack is 50/50 of me losing it. Bolstered by my victory we fought many battles in order to level up and become strong. My party proceeded to fight one of the harder camps. Turn one was given to me and upon my first attack the coin had a big X placed on it. My attack animation went off and *clink* my guitar broke. With no back up I was forced to use nothing but my puny fist. I laughed and cried and couldn’t believe I had missed such an important detail. G.I. Joe was right and knowledge is power. 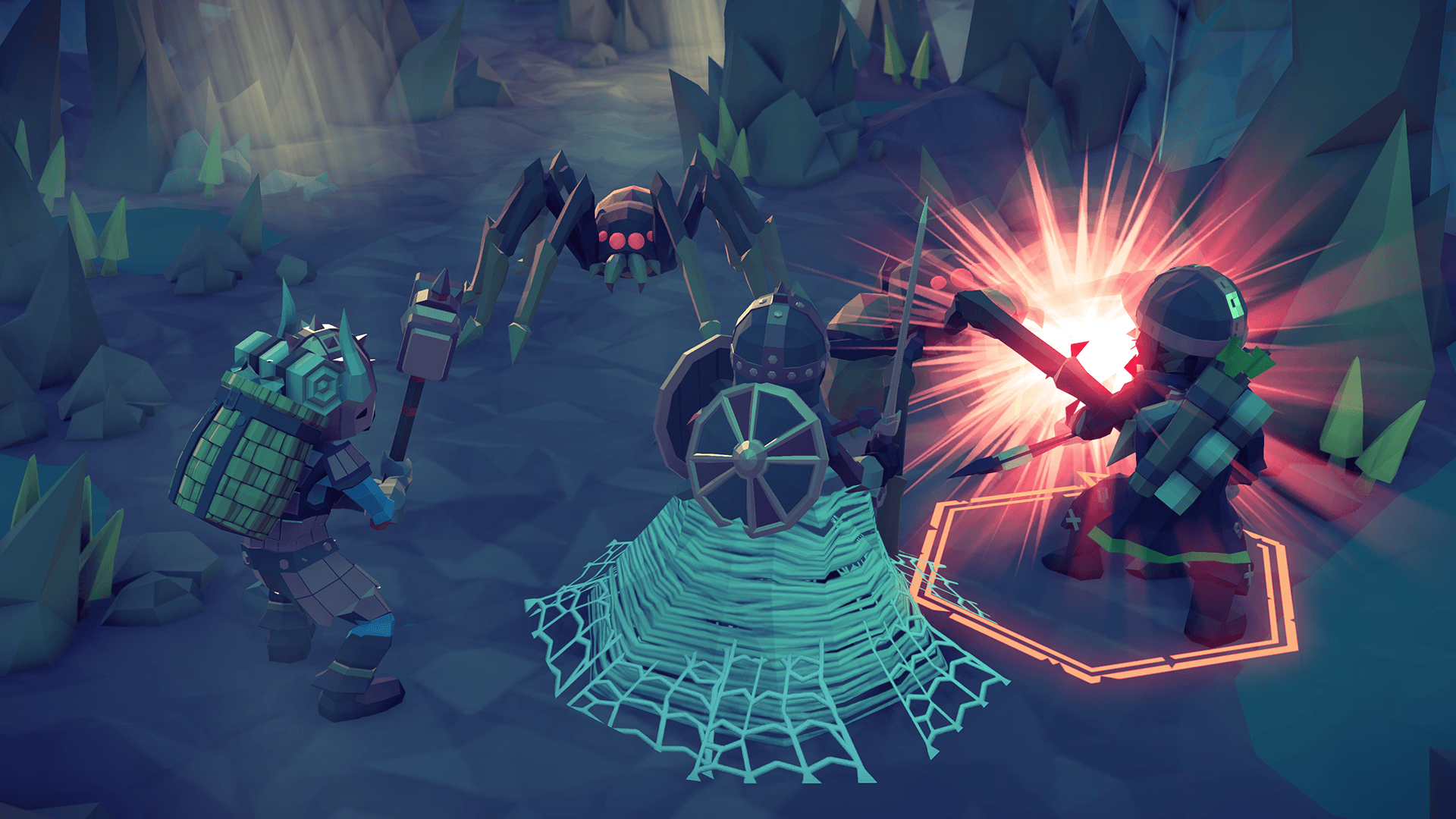 The party gets into a sticky situation. How are these landing? Am I 2/2?

The game is nice on the eyes. It’s not overdone for a table top game and watching enemies ragdoll away from a blast when you defeat them is entertaining. The game isn’t straining on the eyes and doesn’t eat up your processor so friends with older computers can feel right at home playing with you. I once again streamed this game and even with all the background apps there was never any slowdown. The different areas and dungeons stood out and the colouring on this game was very well done. I really enjoyed the more cartoony graphics and it made for some fun character creations.

The sound effects for this game really do make it. When you fail an attack as a minstrel your guitar makes sad noises and sounds awful, however, if your land a perfect hit you are greeted by a beautiful couple chords that hit the bad guys like a semi truck. The music was nice and fit the tone of the overall game. The different areas and dungeons all had music and the enemies sound effects where well suited for this game.

The maps, dungeons and enemies are procedurally generated. The longer you play and the more you complete you are rewarded with Lore which act as a currencies to unlock more classes, events, weapons, costumes and everything in-between. The game rewards you for playing more and more. There is no Meta and figuring out how each new class can help or hinder is a blast. Each time you start an adventure feels like it’s brand new. This game will entertain you for quite some time and with the promise of more content in the future from Ironoak Games I don’t think you can run out of play through time. 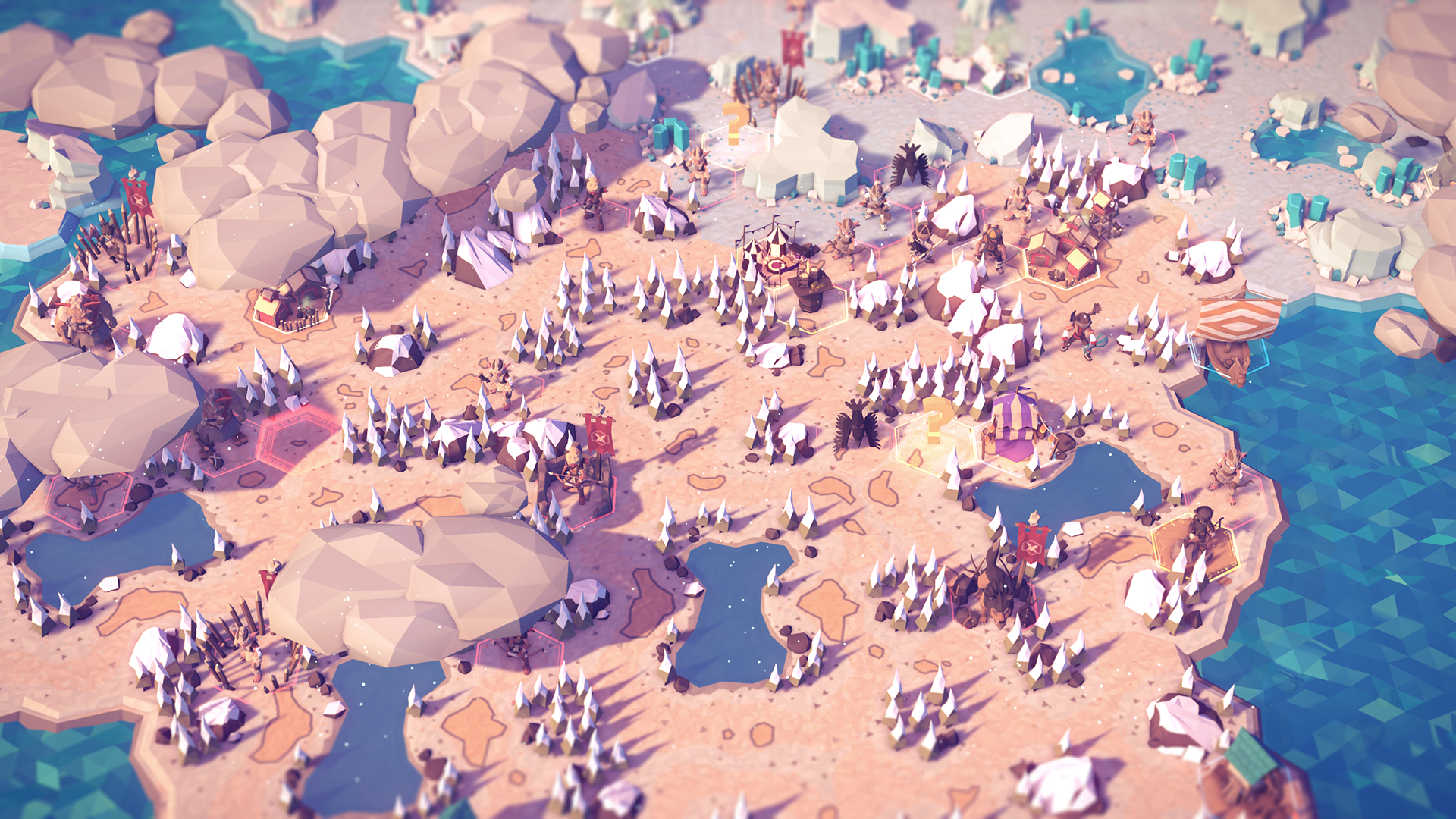 The new frozen tundra map. I wonder if I can get Elsa’s autograph!

For the King will fit your table top itch without having to leave the house. Although there were some small hiccups like the game freezing and some minor bugs it was still a blast to play. I look forward to the future of this game and seeing the work put into it. Although it was hard fought and it has a steep learning curve For the King was fun to play, period. I award this game the Thumb Culture Silver Award and hope you all enjoy it as much as I did.