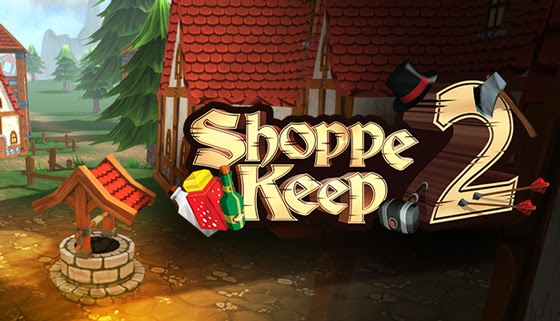 Shoppe Keep was a wonderful shop management title, played from a first-person perspective with a strong focus on just selling items to customers. It didn’t really venture further than that, and it was hard to get into due to the progression system feeling lacklustre. Shoppe Keep 2 is here to change the game.

Shoppe Keep had always been a fun experience no matter how many times I revisited it. Sadly the initial enjoyment of earning enough money to upgrade the store ending up feeling like more work than it needed to be. Customers didn’t flock in, but those that did lobbed your items like a tired bull trying to cause chaos.

Shoppe Keep 2 arrives on Early Access with a much stronger focus on management than its predecessor. It also seems to feel just as sluggish in gameplay as the previous title, but it is much more refined. 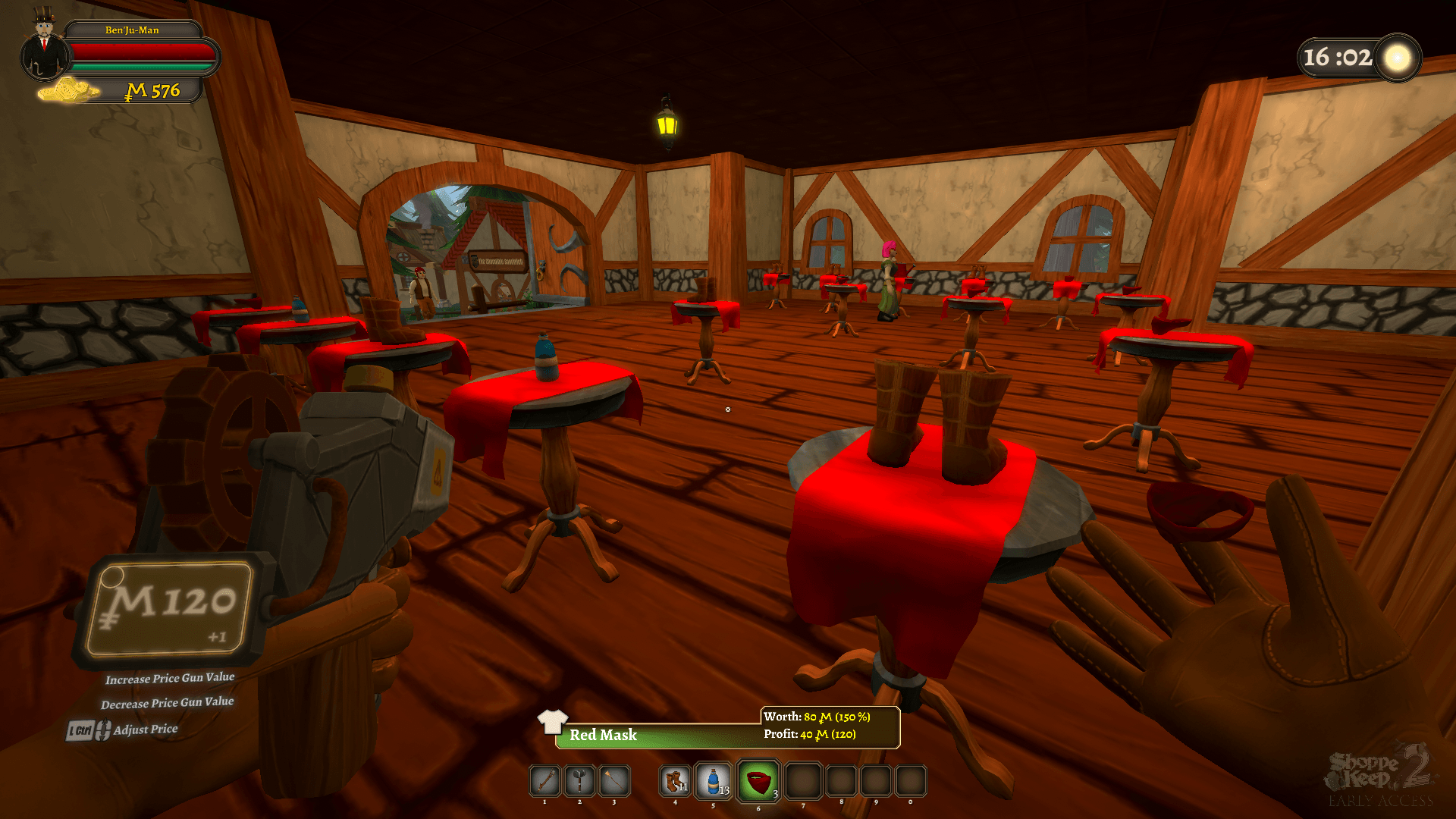 The general idea is to sell to bring in a profit, while also managing the paying of taxes. Using those paid taxes you improve your town as well as your own store. As you progress you’ll continually be earning points in various areas, Management, Business, Movement, and Combat. These come with their own little skill trees but seem rather tedious to actually grow.

Now, an important point to note here. I was playing the EGX Rezzed build of the game and I wasn’t allowed to go outside the gates. I did manage too though…I’ll explain a bit later on in the piece.

Before you can play the game though you’ll need to create a character and a business. This area allows you to simply create your shopkeeper with a range of standard options. Hair styles, tattoos, eye colour, and leafy genitalia to name a few. As for the business name this allows you to create an emblem and a name for your business which is then plastered outside the management house. 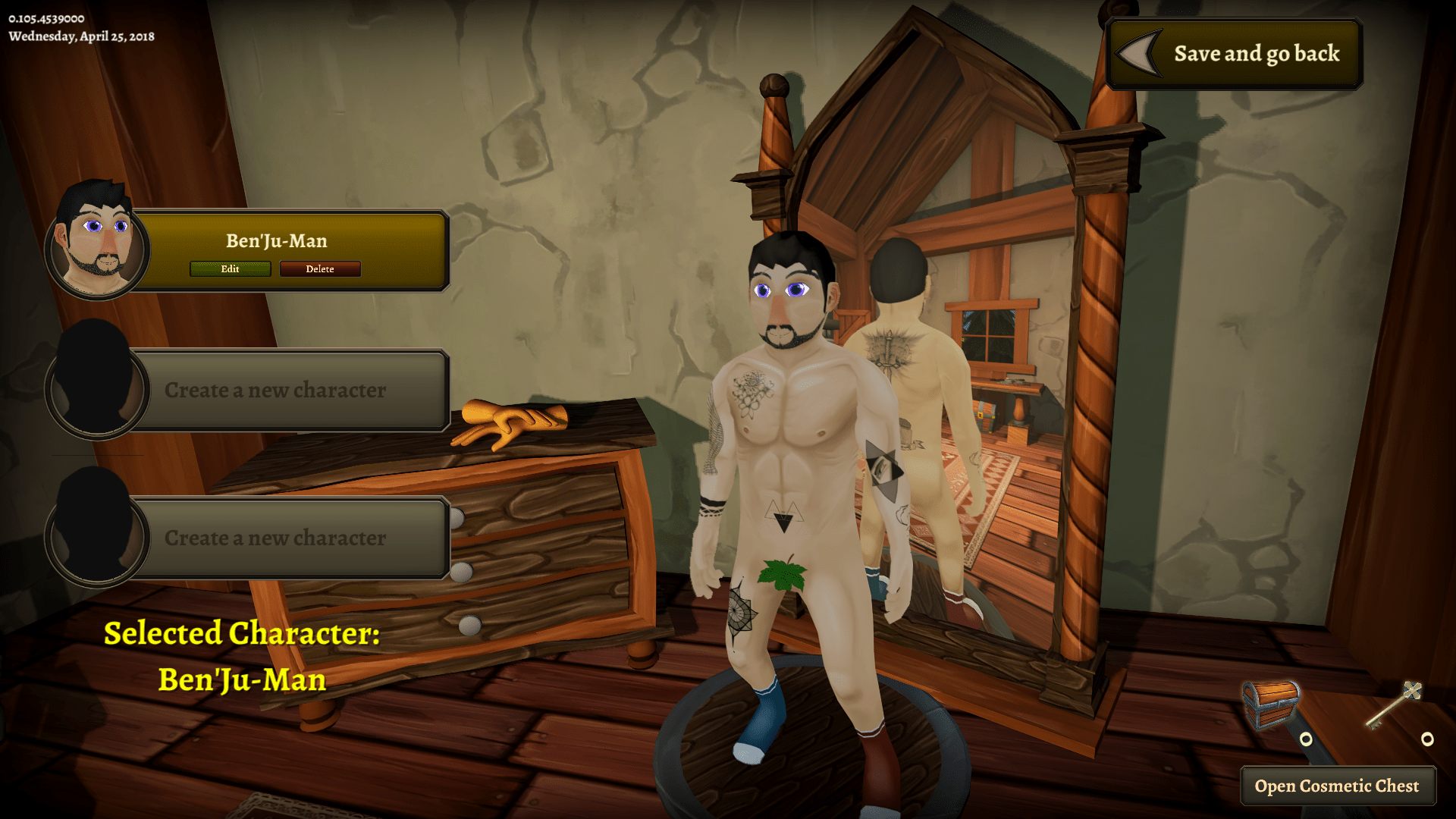 The management house is where you pay your taxes, collect your orders, and manage your store and your town. Taxes paid allow surrounding businesses to florish, bringing more customers to the town, and items to sell. Sadly the tax system seems a bit wonky, and finds your store going into debt halfway through the morning, requiring you to quickly pay off your taxes before reopening.

The better you do, the more tax management is needed.

Your store is located just outside the management house and can eventually be expanded from the standard one room, to an additional five rooms. You start small with only pedestals to sell wares such as boots, bottles of water, and masks. Setting prices with your price gun and earning money from sales isn’t the only form of income though.

You can rummage through rubbish bins around the town like a desperate puppy. Offer to sell items directly to customers like a pestering nonny. Even having the cheek to sell items right at their doorsteps. 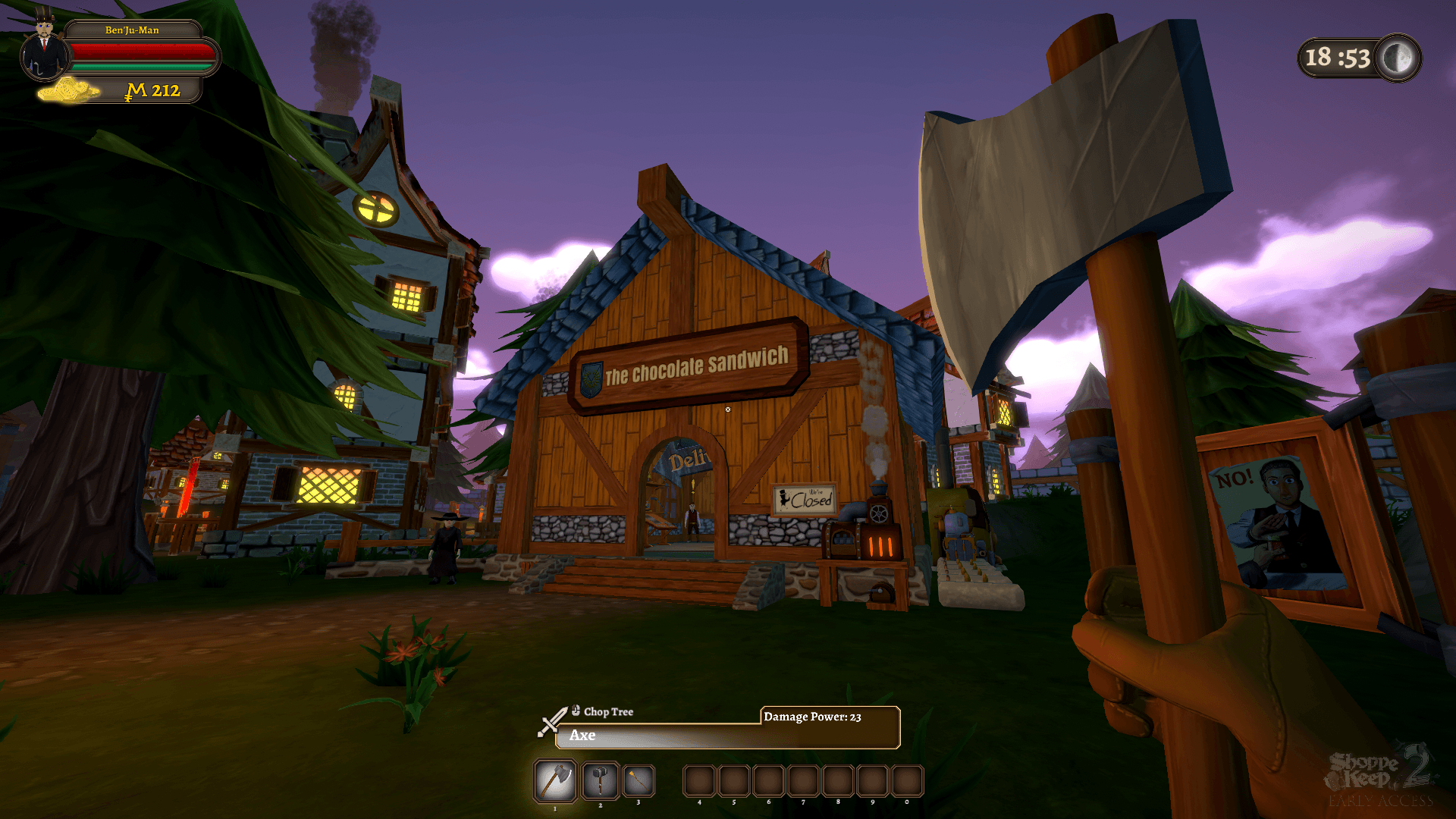 Or kill random customers for no reason.

Shoppe Keep 2 seems to have learnt from the previous titles daunting rise to the top the first suffered from. Customers were hard to please unless you had items that you couldn’t afford.

They hardly visited your store, and when they did only low prices with a small profit onto you would please them, meaning a slow increase in profits. 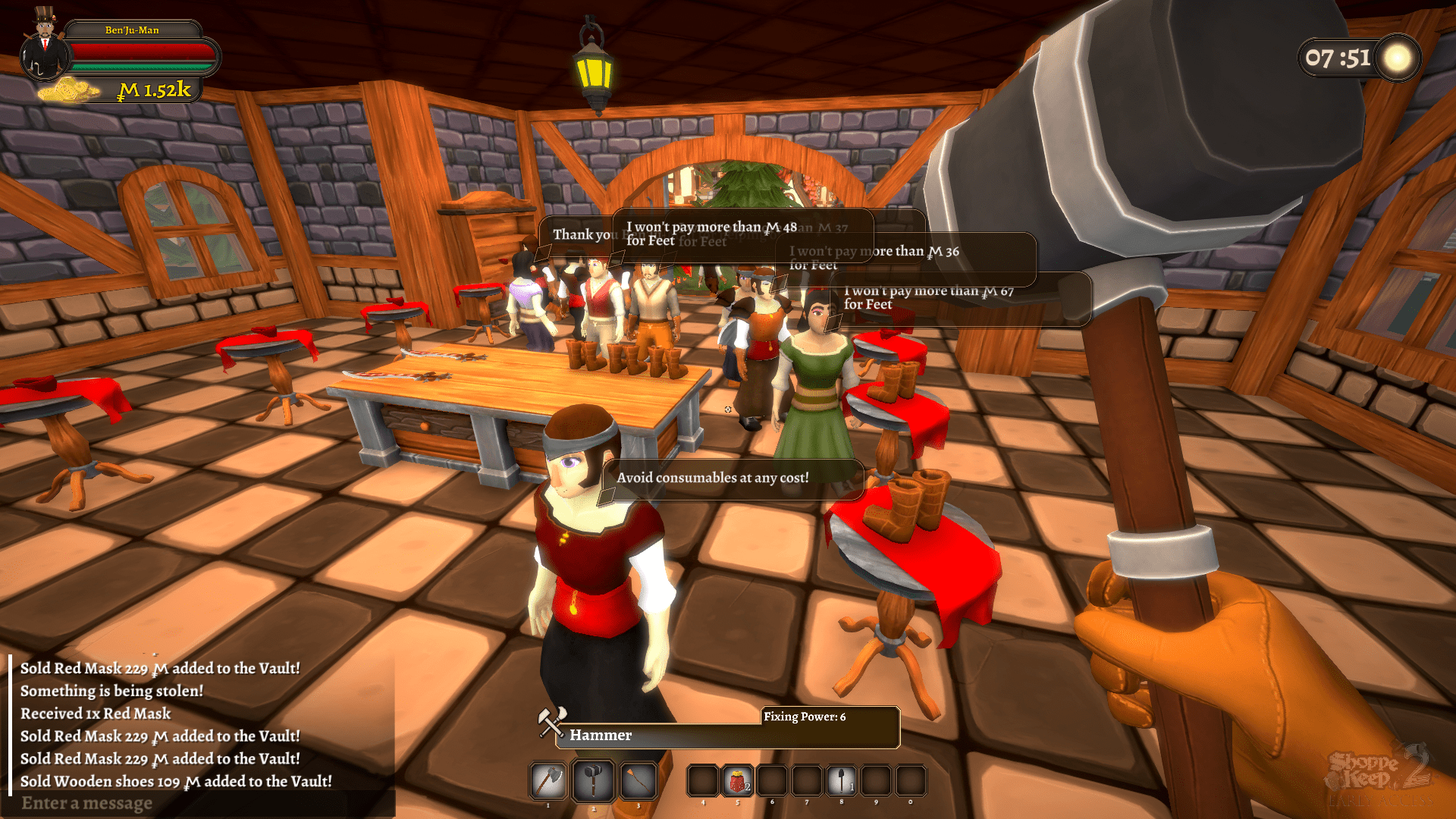 Customers seem to actually flock to your store the minute you open. Buying without a huff and thankfully Strange Fire have killed off the customer disgust system in which they chucked your items. Now they just damage your furniture, which is much easier to manage.

Although there are new systems in place that affects what customers want. For example, if you sell consumables frequently and the townsfolk suddenly believe they’re bad for them, you’ll lose customers. That is unless you replace them for items that aren’t consumables.

The result of these changes leads to you being able to do very well in a short space of time, making the game far more enjoyable than the first. There’s also features hidden away, such as finding a bloke who can sell you robots that help do your store chores.

On the topic regarding item types, the more your sell a certain type of item, then the more your store becomes associated with it. I only noticed this once before the billboard vanished, but here is! 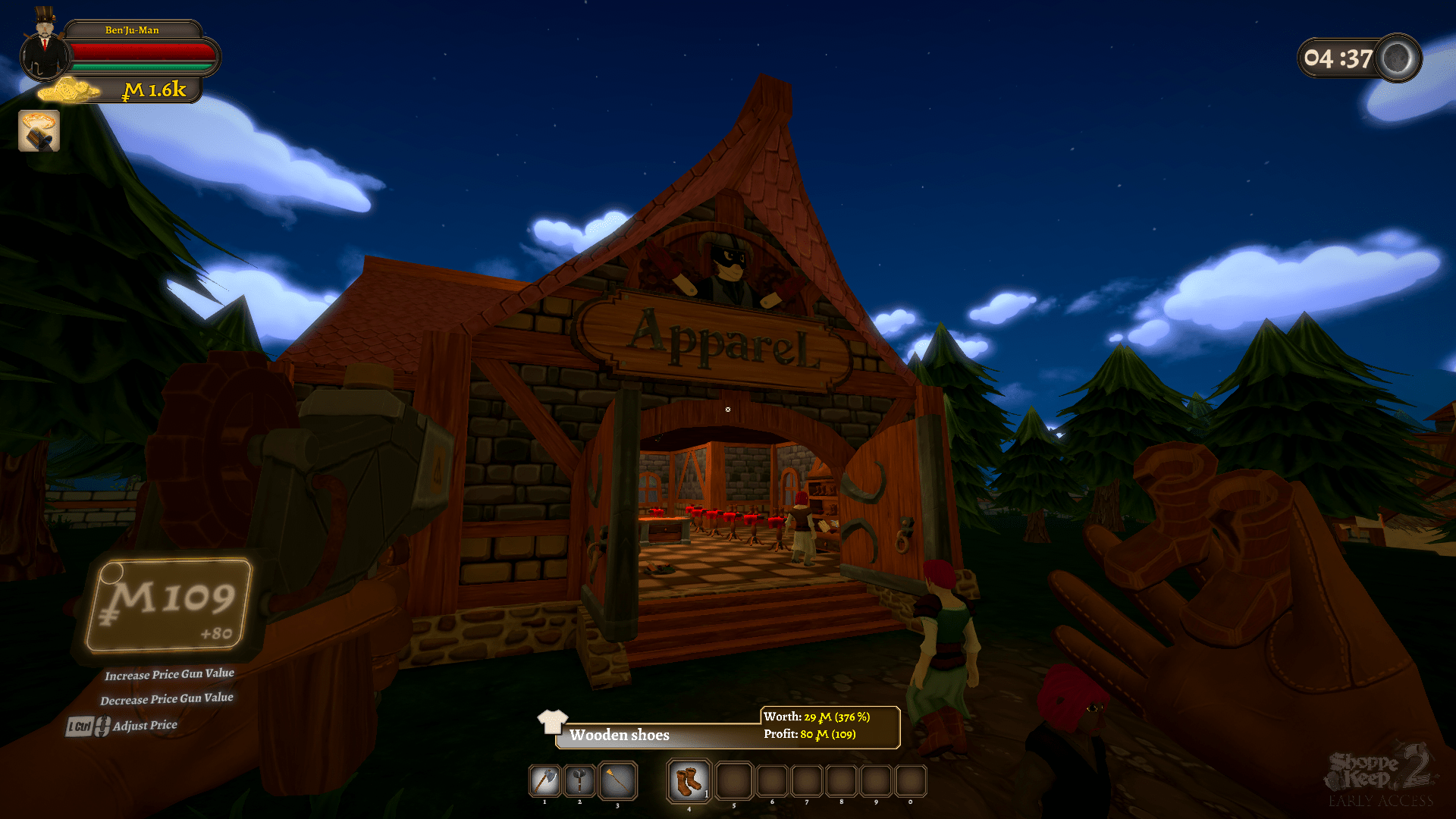 Now, let’s quickly talk about this open-world. You are supposed to be able to explore the world outside your town, gathering unique items, and exploring. This seemed to be a locked feature for me.

However, once I unlocked the final phase of the towns upgrades I managed to climb a tower and jump over the fence. 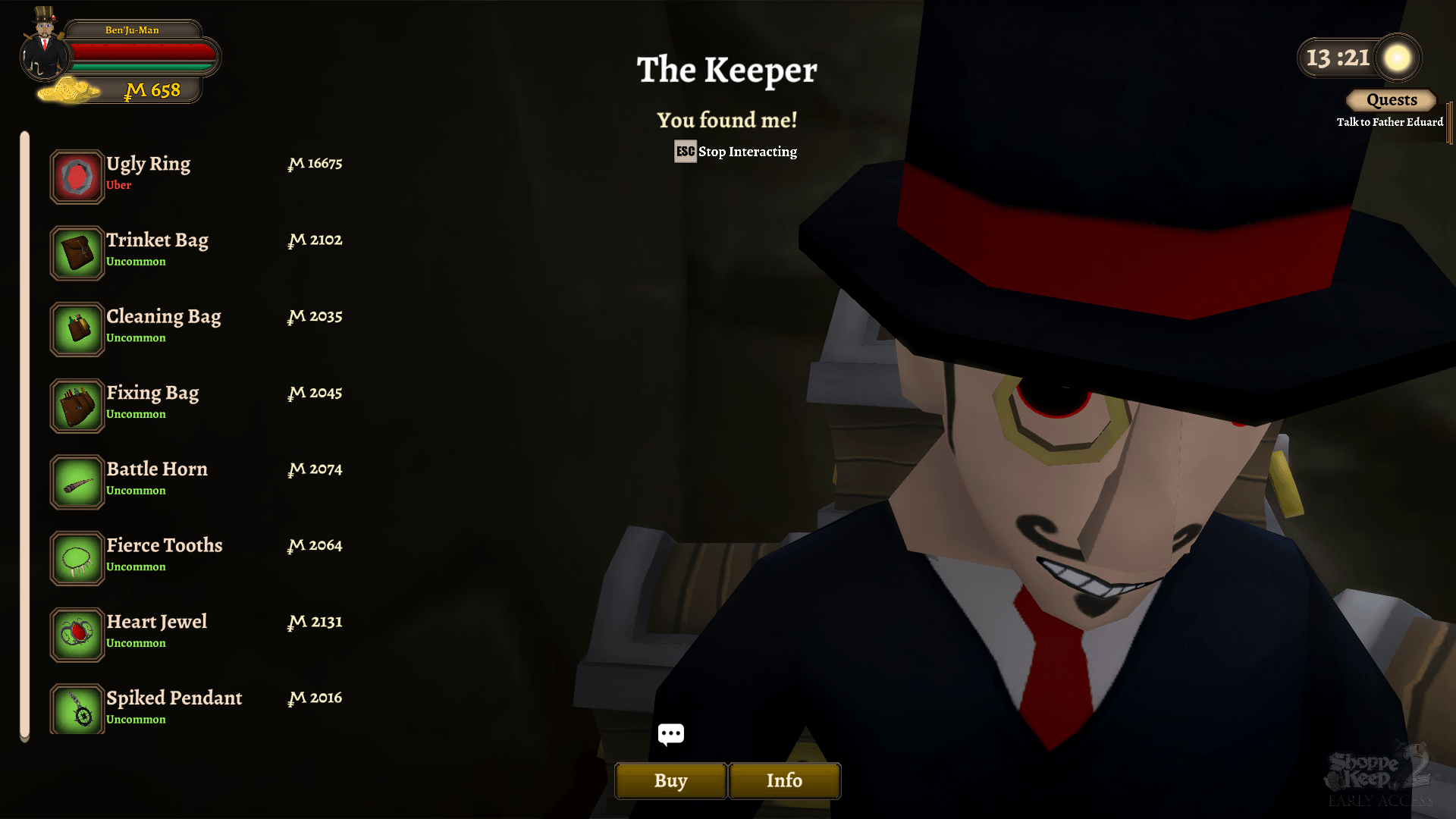 All was going well. I found a mysterious man who sold me rare and expensive items, and I found a few quest areas. It all seems really engaging, and there seems to be a fair bit to do. It certainly gives you a breath of fresh air from managing your store.

I had trouble getting back in though, but after spending half an hour climbing the walls, I eventually jumped back over the wall and continued my progression!

You can’t stop me developers!

Shoppe Keep 2 holds the previous titles art style close to its chest, and adds some extra shaders resulting in a darker tone than the first. The textures seem more detailed and there’s a lot more going on in terms of atmosphere.

This, mixed with the worlds size does mean there’s more work being done on the PC, so it’s going to be more demanding. 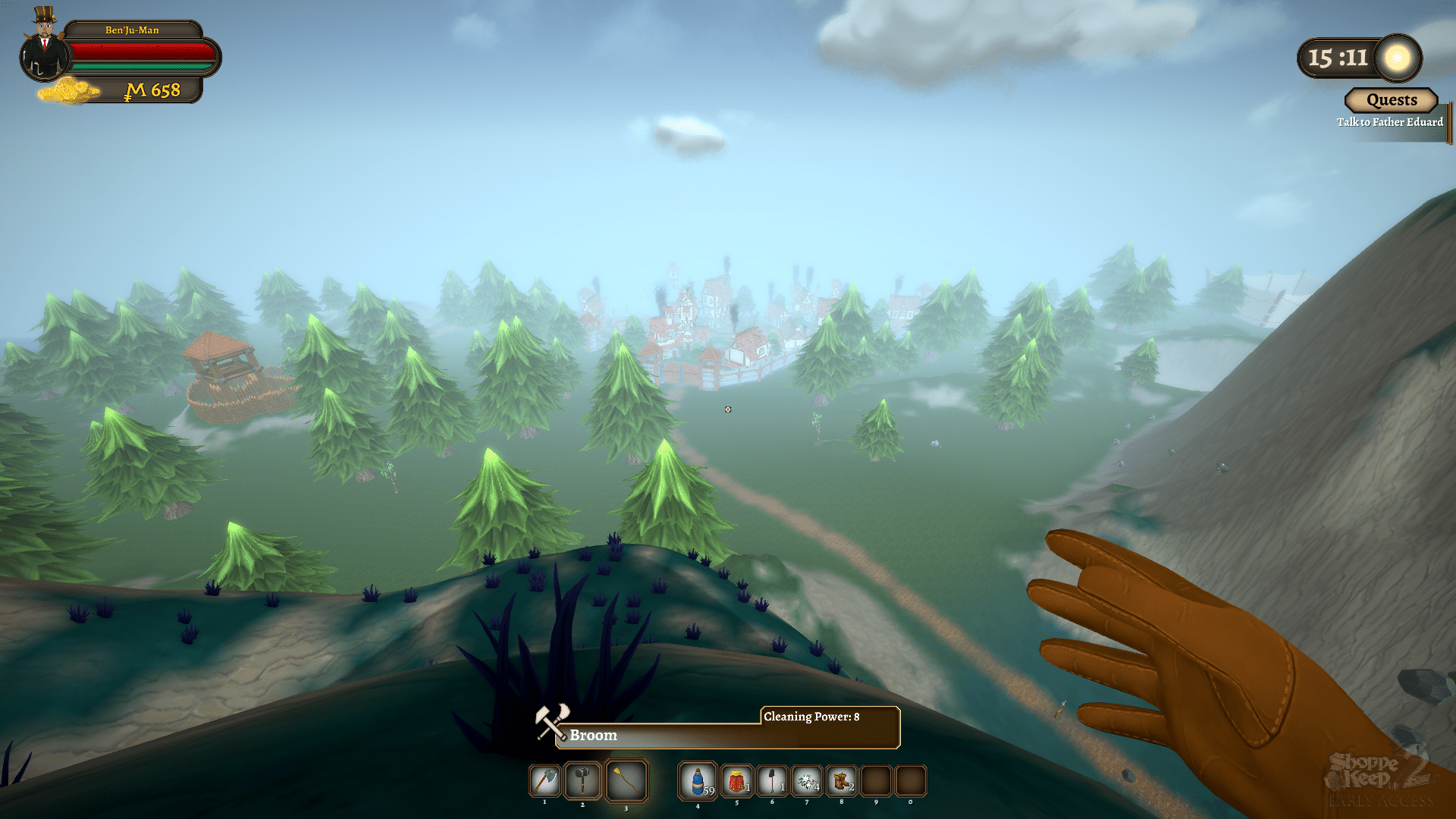 It is a charming game to look at, and while the in-game menus do have a nice look about them, the buttons and sliders seem clumsily implemented in some places. Other times there are moments where buttons would come in handy, such as negotiating prices with an arrow rather than having to type.

The music originally comes across as rather overpowering upon launch, but turn it down a bit and you’ll be able to enjoy the sounds of item placements, price changes, sales, and more. The chat box in the bottom left also indicates what has sold, and if something is being stolen. Handy! 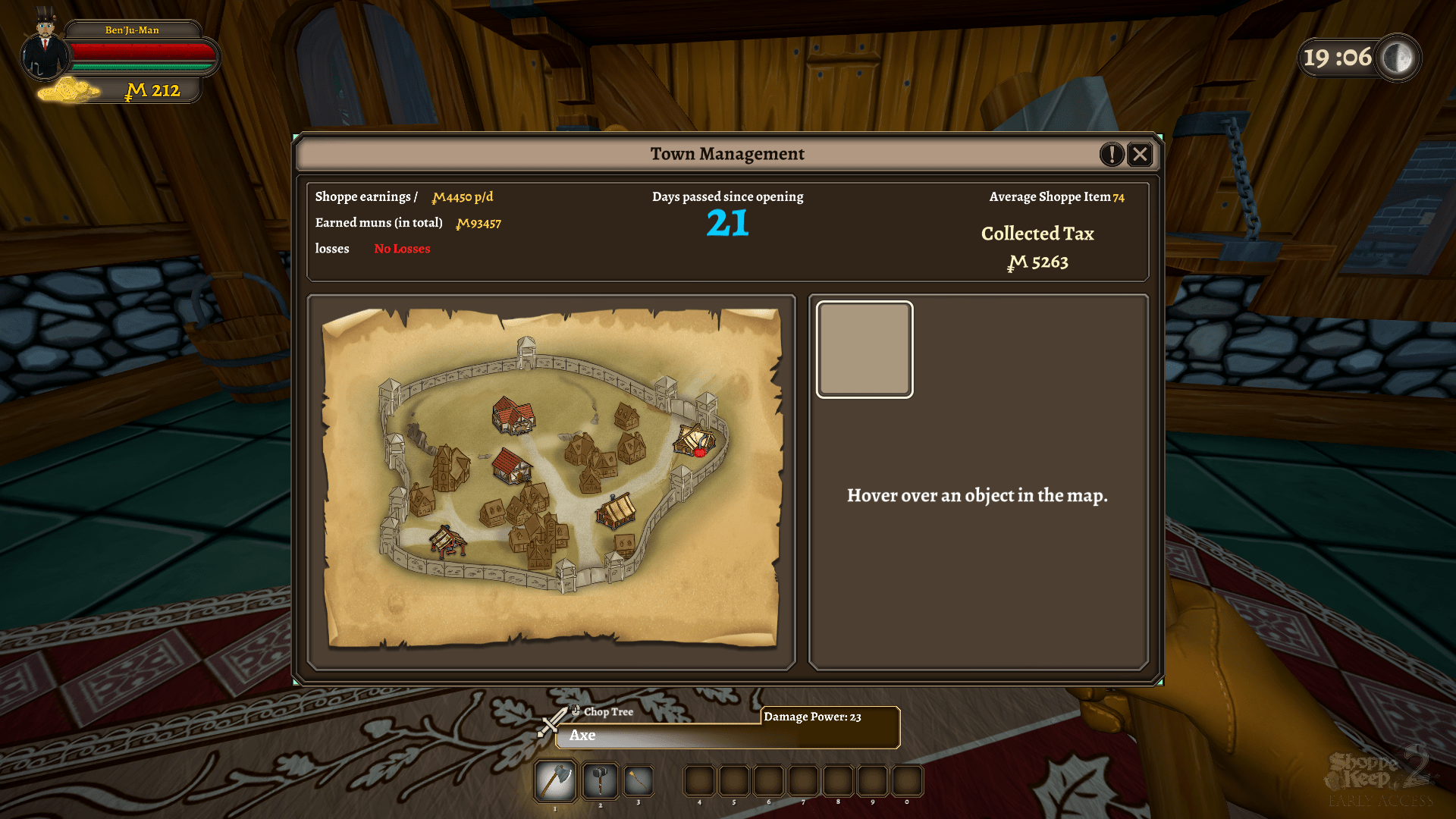 The thing about Shoppe Keep 2 is that, the first always felt like a chore to continue a loaded game. It also felt like too much time went into the loaded game to start a new game. So I just didn’t play it. Or I did, but not for long.

There’s such a large amount of things to complete and manage in this that it feels fantastic to just boot it up again. While there are a fair amount of bugs present, it doesn’t seem to deter from the fun. However, once you do level the town up to it’s max potential, you do end up running out of ideas and the game does start to drag on.

The addition of having up to four other players with you seems like a wonderful feature, but I haven’t been able to try this out. All I know is that when your store is doing spectacularly, keeping on top of everything becomes overwhelming. 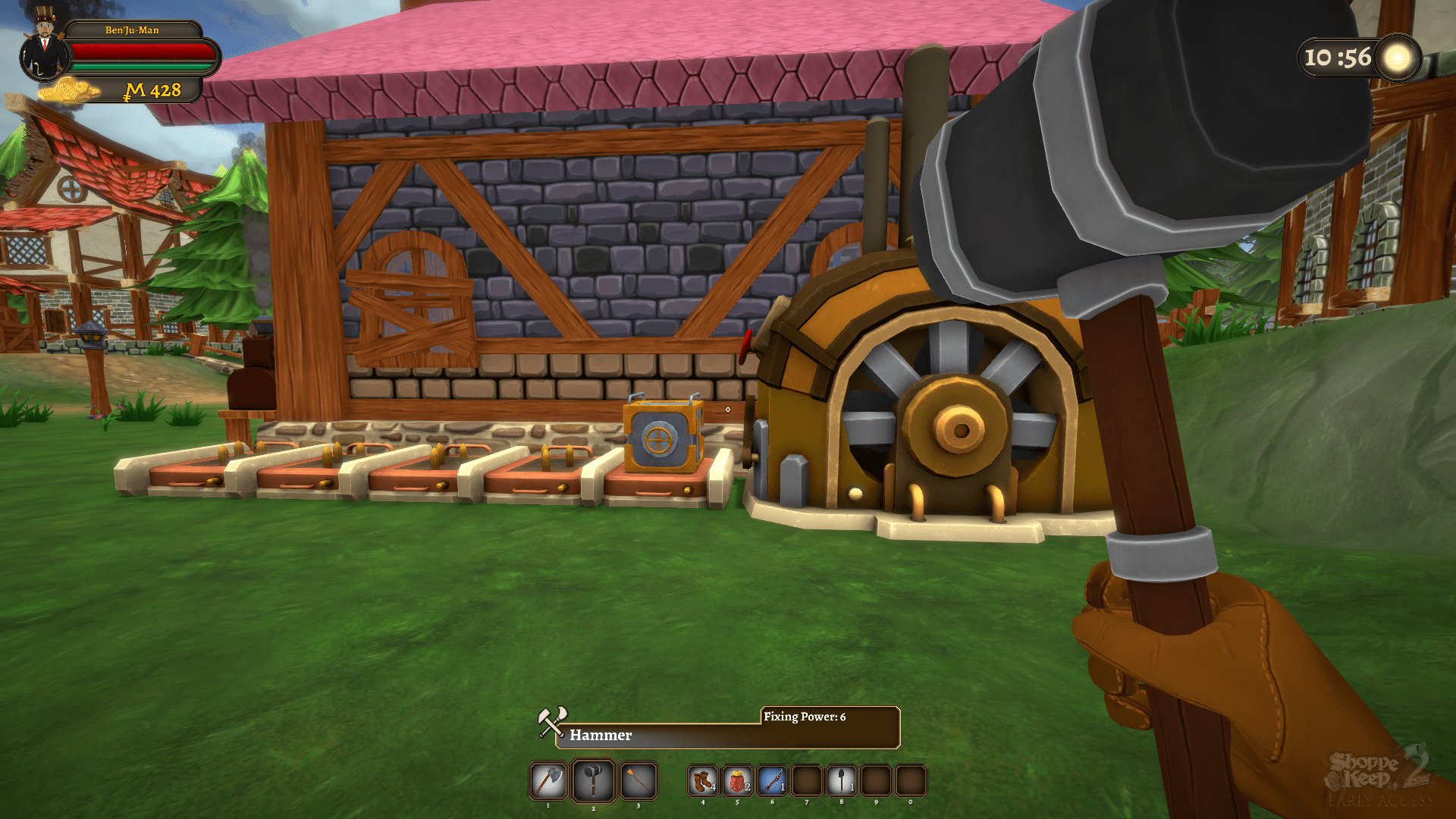 I made the mistake of spending all my vault money (15k) on a Helper Bot to try and give me some breathing room. While it kind of worked, I’m now struggling to get my income back up.

Shoppe Keep 2 is an incredibly well thought out game with financial systems that work with the in-game customers. It lets itself down with the oddly created menu elements, but that’s an area you can push to the side. It’s one of the best shop management games I’ve had the pleasure of playing since, Recettear: An Item Shop’s Tale. I can only imagine how much fun it’d be with a few friends in tow. 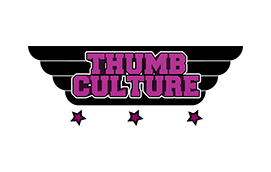 A code was provided to complete this review

Don’t forget to check out our Social Media pages guys. Be sure to Subscribe/Like/Follow to keep up to date with all the gaming news and reviews

Create Your Shoppekeeper in Shoppe Keep 2 Ahead of Launch

With Shoppe Keep 2 on the way this year, players can get a small ...

Strange Fire and Excalibur Games have pushed out a brand new launch trailer for ...