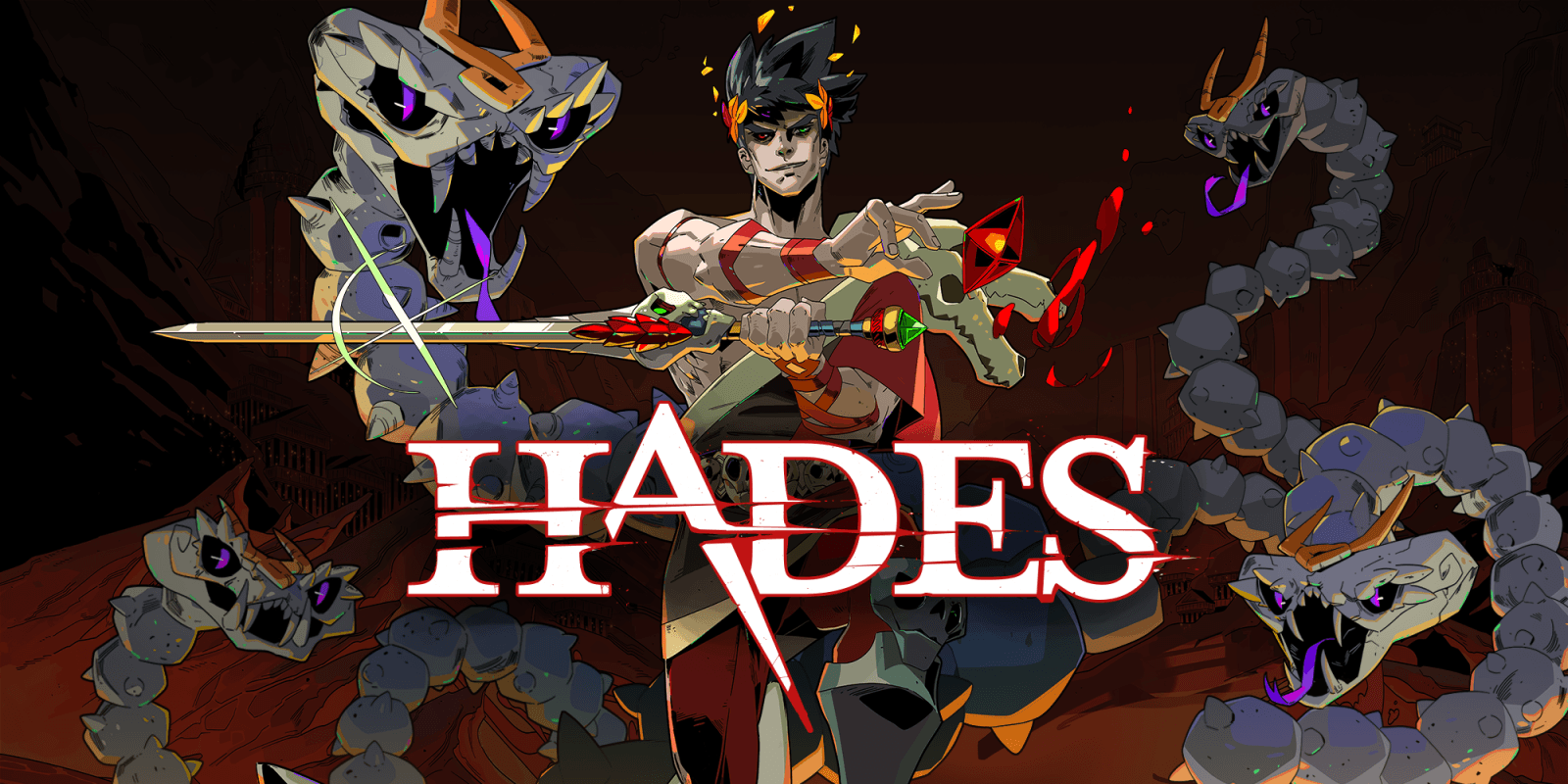 Hades, developed and published by Supergiant Games (Pyre, Transistor and Bastion) is a colourful and humorous rogue-lite dungeon crawler based around Greek Mythology.  Do not think for a second that this is an RPG turn-based affair as while the influence may be loosely based on the strategy genre, the actual experience you have is a mixture of Supergiant’s previous games.  Let’s take a look!

In Hades, you play as Zagreus who is the son of Hades.  The aim is simple, escape from the underworld.  What proceeds is a very fast-paced hack and slash dungeon run whereby you get through as many rooms as you can before you inevitably die.  Don’t worry, this is all part of the story, and it is through perishing that you progress the story.

You begin the game in Tartarus, a deep abyss found in the underworld and set off through the dungeons.  Acting as a tutorial, you quickly come up against various monsters and ghouls who want to prevent you from escaping.  Each have their own unique attacks and movement that you will quickly grow accustomed to.  Armed with a sword you hack and slash your way through each room using a mixture of basic and special attacks, forever conscious that you initially only have 50 health points and no extra lives.  To help you along, you will find that the gods offer their aid in your escape and should you see a large glowing ball of light on the ground Zagreus will mutter the repetitive, but always exciting, phrase “In the name of Hades! (Insert god name here), I accept this message.”  What prevails is the choice of 3 different boons, each with their own ability upgrades, such as increasing either your attack, cast or dash stats, and it is up to you to select the one that you feel will benefit you the most.  Every god that you meet will offer you a different set of boons which stack and later on you will discover that there are different levels of boons such as epic and rare.

The constant mutterings of Zagreus are fantastic throughout Hades, constantly shrugging off the chaos going on around him in a stubborn but humorous way with a mild mannerism of the character Thor in the Avengers.

While you are busy destroying the many monsters in each room you will collect purple drops of a currency known as darkness that can be used buying upgrades in the Mirror Of Night found in your bedroom later on.  In addition, there are keys that help you unlock new weapons as well as Keepsakes to discover.  In each of the rooms that you visit you will discover that you can choose what path you want to follow based on the rewards that are shown on the door.  By having this choice you can control what you want most, boons or currency, for example, each allowing you to progress in different ways.  If things are beginning to get intense then you may be lucky to visit Charon’s shop, Charon being the famous boatman of the river Styx.  Here you will have the chance to enjoy some witty one-sided banter from Zagreus as Charon doesn’t say an awful lot.  Looking at the wares for sale you can spend any gold that you have accrued on further buffs and boons.

Back to the action and you will come across bosses within the dungeon, the sassy Megaera who is one of the three fury sisters, being the first.  After some more witty dialogue where they threaten each other in a really “I don’t really want to have to do this” way, the battle commences.  The combat is fast and furious with lots of dashing, attacking and well-timed deflections in an attempt to stop the inevitable from happening.  I was so close to beating her but just could not get that final attack on her in time.  Should you beat her then you will proceed to the next dungeon where you can restore a bit of health and carry out a few upgrades.  You can sell your boons if you need some more money.

Upon death, you return to the house of Hades where your recent defeat is played down by your father who does not seem that bothered with your futile attempt to escape and mocks you.  Beside Hades, you will find Cerebrus, the legendary three-headed dog who you can affectionately chat to and, of course, pet.  The more you explore of your home, the more your determination rises.  There are several characters that you can interact with and the fully-voiced narration is very well done.  The lovable arrogance of Zagreus shines through very quickly.

Hades is all about the boons and upgrades and once you have selected everything that you want and even possibly bought new weapons such as a bow and arrow, which I love, it is off through the door to re-run the dungeon once again.  This time you will get further and in the process discover more of everything as well as new enemies.  The story will progress further as you work your way closer to your goal to escape the underworld!

The graphics in Hades are nothing short of brilliant.  The cartoon/comic book style works really well and offers deep and colourful visuals that vary between each room in the dungeons keeping it fresh.  Swirling rings of light on the floor let you know where enemies are going to spawn from or attack next, giving you the chance to move to a better location in readiness to dodge or ambush.  Quite a fair amount of scenery within each room can be destroyed and the whole smoothness of all of the explosions and action is flawless

First and foremost the dialogue is superb.  The story is well written and the way that such a macabre event can be swung into a comical game is through the constant verbal interaction between heroes that just do not seem that bothered by death as they know that they will just come trudging out of the pool of blood back at the house of Hades.  The music ramps up and down depending on the event in play, shops, exploration, boss battles, etc. and bounces between Greek folk underlying vibes all the way to full metal action tracks.  The full soundtrack can be listened to here.

Every run through Hades varies in time depending on how long you survive for.  It is very easy to die however remember this is also key for progression as the upgrade system is forever in play and does not reset.  I have not got anywhere near beating the game yet but I would hazard a guess that you have at least a days worth of gaming (24 hours) on your hands and possibly a lot more if you want to discover everything that you can.

Hades is an amazing game.  I was really expecting another tedious hack and slash dungeon crawler however the work that has gone into creating and polishing the gameplay is fantastic.  Having originally been released in late 2018, I cannot fault the story, style, game mechanics or audio narrative that all comes together to be a tremendously enjoyable Greek affair.  Well done Supergiant Games, you’ve got yourself a Thumb Culture Platinum Award! 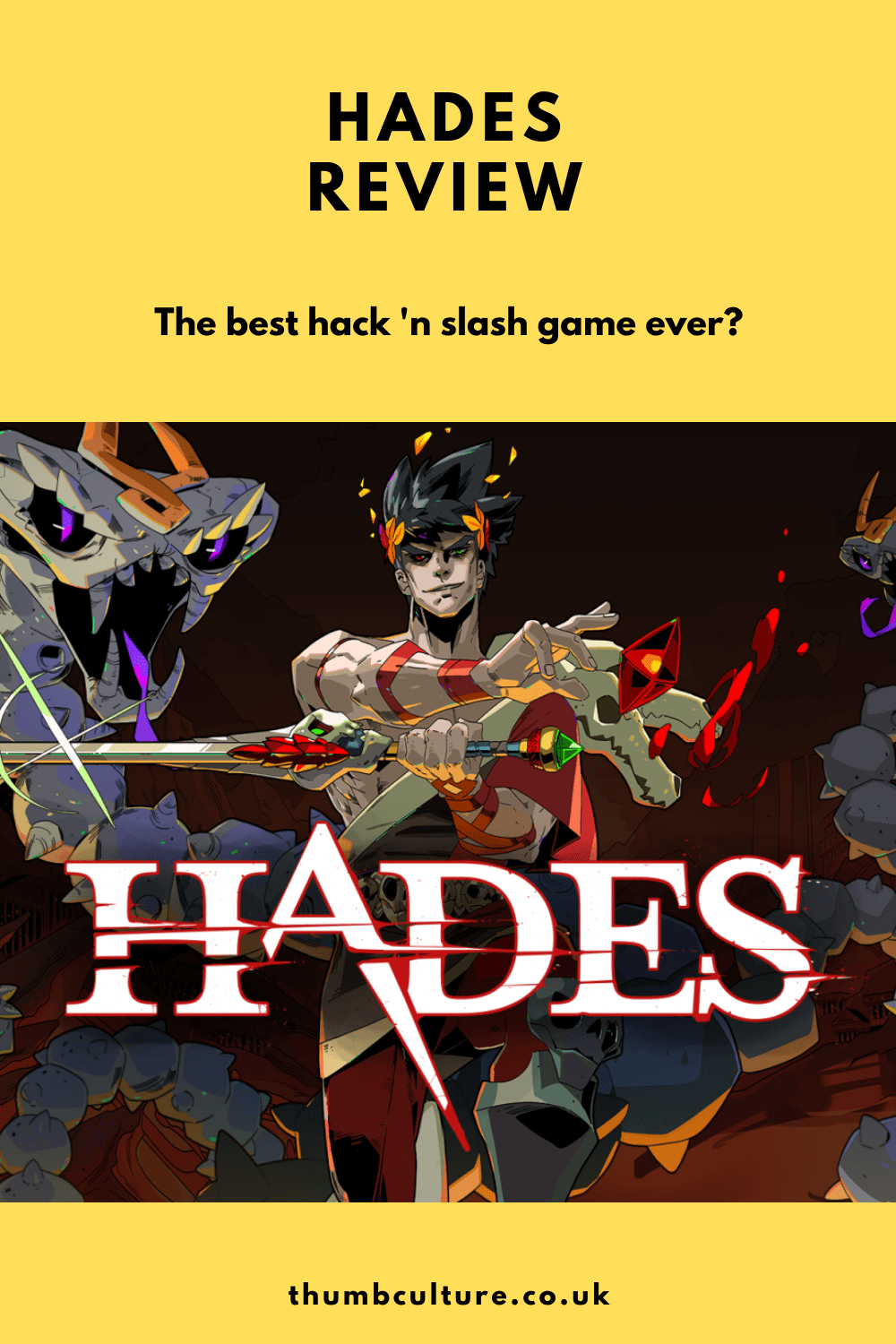 One thought on “Hades – Best Hack ‘n Slash Ever?”