Grim Legends by Artifex Mundi with its tales of love, heartache and tragedy is a hidden object game that tells the story of a young woman that returns home for her twin sister’s wedding, only to have events unfold that lead you on a quest to rescue your sister.

The game having previously been released, among its 2 sequels, on a number of formats, including PC, Apple, Android, and Xbox One has recently been released on the PlayStation 4 and what does that mean for us PlayStation owners. Well you get to play a game that has got great reviews across its many platforms, and Artifex Mundi are a leader in the hidden object games genre. What does this game bring to the table, well let me tell you.

“The wind lashes against the cliff side trees, which clutch the stones like grasping fingers. Overhead a storm rages, scattering the long pillows of mist that haunt the land like ghost ships. Against this backdrop a girl is silhouetted. She is running, clutching her shawl to keep the rain out of her hair. A flash of lighting illuminates her face. She is beautiful, but she`s crying. Raindrops are mixing with the tears streaming over her cheeks. She starts to scream, but her words go lost in the wind. She trips on a root, falls to her knees. In a moment of rage and despair she pulls the small golden wedding band from her finger and tosses it off the edge of the cliff. The ring flashes and disappears into the abyss. As she walks away, she cannot see the red glow that pierces the fog and the demonic, gnarled hand that appears as if out of thin air to catch the ring as it falls.”

The story line is simple at heart, but the way that it unravels; with its twist and turns was a joy to play through and it was this story that kept me enthralled in the game, completing it in one sitting. Its dark, mature themes offer plenty for everyone to get their teeth into whilst playing through the game. The voice acting was slightly questionable, but with the animation style this can be forgiven, it’s not like it’s advertised as using full motion capture.

The game itself is a puzzle slash adventure that see’s you having to find hidden objects in scenes as well as solve puzzles which funnily enough involve you finding certain items before completing the puzzle. These puzzles are set across 39 unique and beautifully hand-painted locations ranging from a woodland scene to an old ladies cabin, each one littered with animated details and individual items to find. 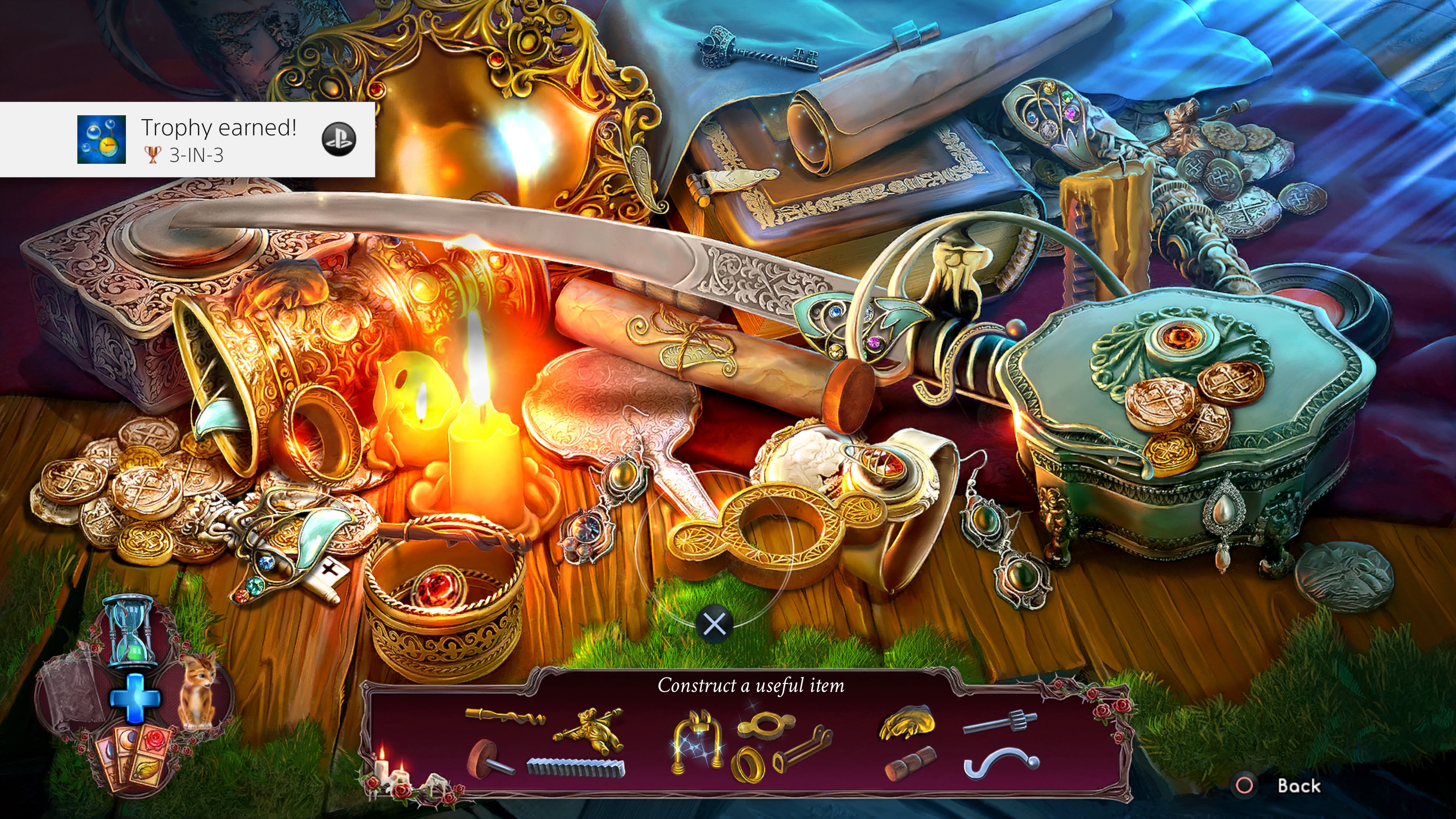 The soundtrack to the game is one that adds more to the game and doesn’t at any stage overwhelm what is going on onscreen.

On the hidden puzzle scenes there are simple items to find as well as multistage items to find, which are handily highlighted in blue text as opposed to the white text of the standard items. These multistage items come in different forms, but for example, you are looking for a spice rack, however that spice rack only has 2 of the 5 jars within it, so you have to find the other 3 before being able to grab that item.

Then we have the puzzles that are seemingly difficult to complete on your own, well you have the help of Fuzzy, a cute little kitten that you find right at the beginning of the story. This kitty cat can climb trees, go into small spaces, all to help you solve the puzzles and progress towards finding your sister.

If you are finding an object difficult to find you are given a hint button, this needs recharging once you have used it and often was a great help, especially if you weren’t sure if there was anything else to find in a particular area. However, another way to determine this was to simply bring up the map by pressing left on the D-pad, doing this gave you an overview of the different areas that you could access. Any with a red exclamation mark indicated there was a player action in this location, and a gold cross indicating where you currently were.

In some instances you could forego the hidden object games instead opting for a dominos game where the aim is to get your dominos to cover a number of coats of arms; this in itself is easily achieved but only having 3 options of domino tiles at a time it definitely needed a slight bit of thinking to complete.

If you are a fan of the hidden object genre or are looking for a great puzzle game, then you really can look no further than Grim Legends, with its beautiful art style and great soundtrack the game is a delight to play, and even throwing in a bonus adventure at the end gives you a little bit more adventure for your money. Grim Legends receives our Gold Award.