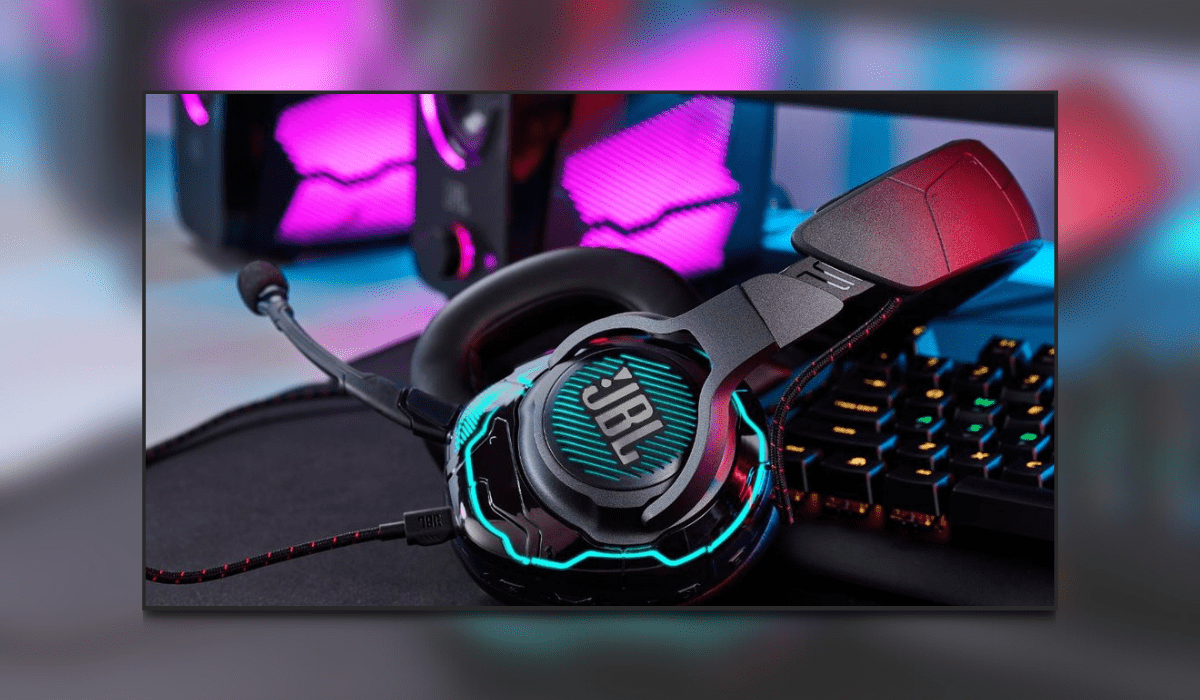 The awesome people over at JBL kindly sent down a pair of their recently launched Quantum One gaming headphones for me to have a play with.  Before I have even got the product out of the box it already looks a very colourful ordeal with vibrant oranges painted across the packaging.

JBL Quantum One – Dare To Listen

With JBL being very well known for its speakers, I was interested to see how they would sound in a gaming headset. As, where precise sound is key if you want to survive in first-person shooters.

Straight from the box there is a fair bit of substance to the Quantum One headset with a weight of 369g, bearing in mind that this is a wired headset.  In comparison to some of the other headsets that I have had the pleasure to review, the wired Roccat Khan Aimo headset is 277g while the wireless Hyper X Cloud Flight S is 320g.  With the padded headband and earcups, the weight would not become a burden when gaming for a long duration.

The design of the Quantum One features buttons and dials on the left cup which is fairly typical for most gaming headsets.  The usual controls such as mic mute and volume are located here along with the facility to switch between active noise cancellation and talk thru.  Connection is via either the supplied USB C to A cable or by the also included 3.5mm jack lead.  I do like how the headset can be used for multiple peripherals and not just restricted to PC.  It is worth noting that there is no Bluetooth on this model.

The detachable boom mic sits quite nicely near your mouth allowing enough room to still be able to drink a cup of tea without knocking into it, always a bonus believe me!  Having a shield over the mic also reduces any unwanted constant heavy breathing that you sometimes encounter when gaming with others, nothing worse in my opinion!

As with most PC devices nowadays there is a whole host of RGB lighting going on around the earcups, all of it is fully customisable via the JBL Quantum Engine.  Although the lighting looks fantastic when you are not wearing the headset, it does always seem a little pointless in my opinion as once wearing the device you cannot see the lights, unless you want others in the same room to see it or you are streaming to the masses.  Personal niggle aside, it still looks bloody awesome so I will shut up.

When it comes to functionality there is a large game-chat balance dial midway along the braided USB cable that allows you to mix both the game and chat volumes so that you can find that perfect blend.  Seeing as most of my chat is usually through Discord, and the Quantum One is certified for the same app, the dial worked flawlessly.  I found that the handy 10 o’clock to 2 o’clock range kept your finger movement to a minimum while the tactile centre point helped you find that mid-point setting with ease.

Getting to the sound itself, the JBL Quantum One headset features 50mm drivers with a large dynamic frequency response starting from a very bassy 20Hz all the way up to 40KHz.  As humans generally hear up to 20khz, you will only benefit from the increased range if you are an animal such as a racoon, dog or sheep.  Through the Quantum Engine app the 10 band equalizer (31Hz to 16KHz) can be customised and saved to suit the sound style that you wish to hear as well as select between preset configurations.  That said, the clarity of sound that is produced from the speakers is nothing short of incredible.  I have played several genres of games on both my pc and ps5, everyone sounded phenomenal.

The immersion that the headset brings is amazing and far better than the previous headsets that I have owned.  When locating the directions of incoming gunfire or footsteps you can easily hone in on where they are coming from and make your swift decision to either return shots or lie in wait for the ambush.  Driving games are equally immersive with the throaty roar of the car engines as well as the atmospheric sounds of dirt spray, road type and the crowd cheering that all come together to create one hell of a game session that will leave you smiling.

When it comes to the spatial sound you can choose to either have normal stereo, DTS 2.0 (a simulated 7.1 setup), or JBL QuantumSPHERE 360.  I have never been a fan of simulated surround sound. However, with the Quantum One headset, the level of immersion is certainly increased without detriment to the actual sound playing which was a pleasant change.  When it comes to QuantumSPHERE 360.  Inside the headset is a built-in gyroscope and when run through calibration via the app using the supplied in-earbud that you attach where the boom mic plugs in the headset begins tracking your head.

How does this relate to the sound in-game? Well, quite simply when you turn your head, the sound concentrates from the ear cup facing where the sound is coming from.  All very clever however at the same time I could not find a use for it. When playing games I play on one large screen and I move my character’s direction using the mouse, keyboard or gamepad.  My head stays perfectly still.  If I did turn my head to the side I would either be staring out of the window or watching Emmerdale on the TV.  I can imagine that if you had one of those glorious monitor setups that span all across the wall then you probably turn your head a lot more, therefore this would possibly be of benefit to them.

I did try to use my Oculus Quest 2 via the PC however I found that the head tracking was lost very quickly meaning that you were constantly pressing the recentre button on the headset.  Gaming aside, when listening to music, especially live albums, the ability to have sound coming from one direction was pretty cool and made you think that you were actually at the concert.

The JBL Quantum One headset has one of the best noise cancellation techs that I have seen for a while.  Being in sometimes quite a lively place, I was amazed at how well I could switch on the ANC via the app or the headset button and boom I was at peace!  Although with noise cancellation then comes the problem of trying not to shout when talking, there is a sidetone option that can later be enabled on the app once the area is quiet again so that you can now hear your voice through the headset at an appropriate level. Double boom!

The JBL Quantum One headset is certainly formidable when it comes to sound and style.  There is a strong focus on surround sound therefore if you are not into that type of spatiality then I would probably say go and look at other headsets that do not incorporate that sort of functionality as you would be paying for something that you would not totally use.

While the sound quality is both crisp and punchy thanks to JBL doing what they do best. My only other gripe is the braided USB lead of doom.  While most braided cables are supple and slinky. Unfortunately, JBL decided to use a cable from my mum’s old 1980’s iron.  The detachable USB cable is very stiff and loves to kink itself up very easily as a result. I hope that in the future JBL revisit the design and change the cable to something less rigid.  Tiny qualm aside, I give the JBL Quantum One headset the Thumb Culture Gold Award.