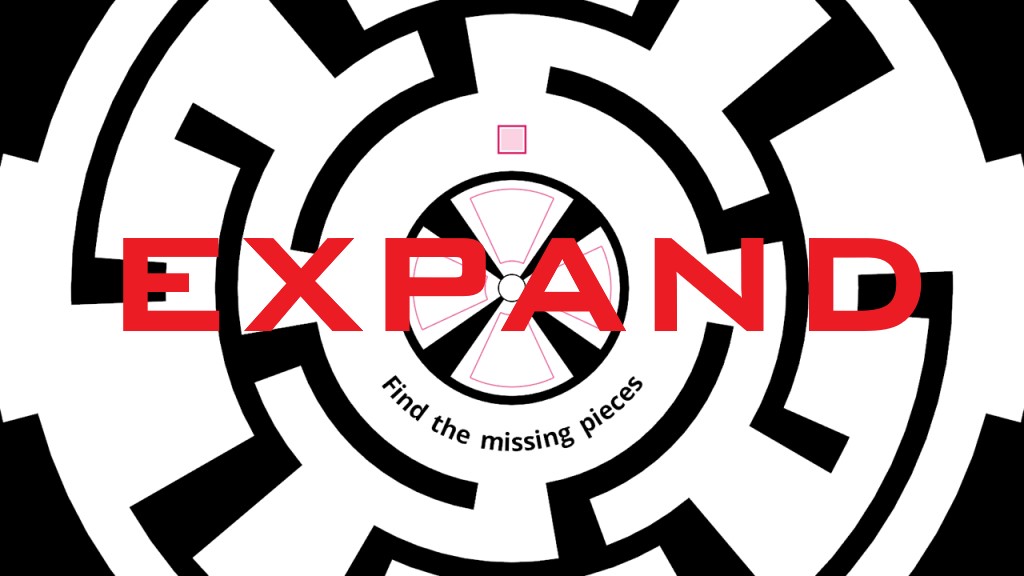 I am a bit of a puzzle fan (usually in physical form rather than video games), so let’s not waste any time and get stuck in.

The Premise of Expand is very simple, guide a pink square through a series of puzzles and mazes to collect a pink ‘quadrant’. There are 4 of these quadrants to collect each of which come with a different type of level (or puzzle), each of which take approx. 30 mins to complete. Then there’s one final area which combines all of these as a ‘final challenge’ of sorts.

Expand is unusual in the way that it’s both relaxing and frustrating at the same time (in a good way). The music and steady pace to the level structure, without any real time limit or lives make it relaxing. However, the amount of times you will make the wrong choice over something that retrospectively is very simple can become frustrating as hell.

As each puzzle ‘Expands’ into view (sorry couldn’t resist), there is very little you can do to forward plan. You have to be able to adjust on the fly and quickly as the maze around you reacts to each movement. The only clue I will give to any puzzle fans looking to try this game out is there are large elements of the maze that remind me of the board game Operation. The controls here are very simple, all you need is the right analogue stick. Everything else is surplus to requirements. What I will say though is the simplicity of it is what makes it enjoyable.

Expand has a very simplistic monochromatic look to it which fits very well within its design, the levels move flawlessly with fluidity and in the time I spent playing I didn’t spot a single flaw or glitch within the graphics.

Chris’s use of negative space within the puzzles here deserves a note as even when you know there is nothing there it still adds to the tension of the unknown. The question of ‘Could there be something within that darkness that’s going to fly into view when I move?’ will constantly go through your head.

Something to make note of though. I wouldn’t sit too close to the TV while playing this game, at times the levels swirl as they expand and contract in and out of view, which If your close to the TV can cause you to feel a little nauseous (I can already hear every parent screaming ‘serves you right for sitting too close’).

The majority of the Audio for Expand is a piano based score. This very much ticks the ‘relaxing’ box and melds very nicely in with the game. There is a recommendation right at the start of the game to play wearing headphones. While most of the time I shrug this off as being overkill. Here it’s very much an experience enhancer. I would say wearing headphones (a good set) is the only real way to play this game. At times I actually found myself not paying attention to the puzzle and just listening to the music.

As I mentioned earlier, each of the 4 sections takes approx. 30 mins to complete, with the finale being a little longer. However, for the price it’s hardly a bad deal. I’d actually say if you’re a fan of puzzle games looking for something that you can sit back, relax and play while still being challenged without spending a ton of cash? This is the perfect game for you.

The only real downside I could say for this game is the lack of trophies (which might not be a bad thing depending on your outlook). There are only 10 trophies in total, which all unlock as you complete the levels. So simply finishing the game will get you the platinum.

Expand is an excellent example of a well-designed puzzle game. It’s perfectly set up for casual puzzle gamers to just sit and relax with. There’s very little I can say about this game that’s bad, apart from: There isn’t more of it. Its low price point and puzzle fun factor make it a very worthwhile experience for all gamers .I therefor give Expand a Thumb Culture Silver Award.