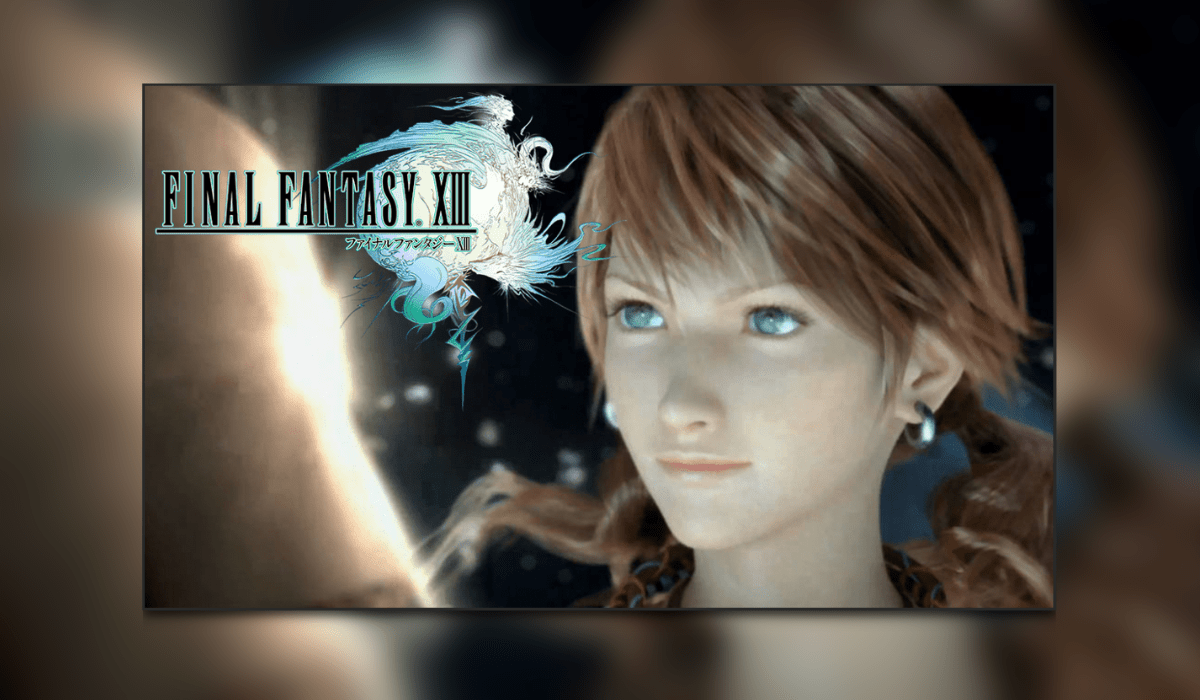 As we are on the verge of Square Enix’s 16th instalment to their flagship series Final Fantasy, we thought we would take a look at one of the games that divided the fanbase, Final Fantasy XIII.  Both developed and published by Square Enix, Final Fantasy XIII is an RPG that released in March 2010 for PlayStation 3 and Xbox 360.  It wasn’t until 2014 that it saw a release on PC.  It is also available on the Xbox Series X via backward compatibility which will run at a higher resolution.  For this review, I am playing the PlayStation 3 version.

Final Fantasy XIII – Do You Have The Courage To Face Your Destiny?

Final Fantasy XIII received positive reviews upon release, but some fans had criticised the linearity of the game up until a certain point.  Square Enix has gone on record to say that this is primarily a story-driven game saying, “it becomes very difficult to tell a compelling story when you’re given that much freedom”.  Hence straying away from the traditional RPG open-world template.

Have you played Final Fantasy XIII? Let us know what you thought in the comments below.

As with any Final Fantasy game, there are plenty of recurring themes.  Airships, Chocobos, Summons and of course, Crystals.

The story takes place on Gran Pulse (or Pulse), and Cocoon which is a giant floating utopian world within Pulse’s atmosphere.  Cocoon is governed by the Sanctum and ruled by god-like mechanical beings called fal’Cie.  Pulse and Cocoon had been at war in the past.  When the Sanctum discovered a Pulse fal’Cie In Bodhum on Cocoon, it ordered a Purge of all residents of Bodhum at the point the fal’Cie was discovered.  It gets so deep I could write a whole article on it, so I will leave it there.  But let’s just say, deception is rife and who knows who the real enemy is?  That’s pretty much just the first scene in the game.

The first few chapters are essentially a lengthy tutorial for an intricate, yet very rewarding battle system.  There are six playable characters in the game.  You will spend a lot of time in battle, in which you will control the party leader in a team of two or three.  Players will select commands to fill their ATB (active time battle) gauge.  The actions of these ATB segments will drive up the chain gauge of the enemy to its stagger point.  Once an enemy is staggered it is considerably more susceptible to your attacks.

It is also possible to auto-battle saving you the effort.  This can be particularly useful.  If you use the ability ‘Libra’, it will expose certain information about your foe.  You will learn what its attacks are like, its HP, but more importantly, Libra will expose its weaknesses.  Auto-battle will take this information and select the most appropriate command to ensure victory.

Each party member will be assigned a specific role which can be developed in the Crystarium with CP points gained from battle.  These roles are Commando, Ravager, Synergist, Sentinel, Saboteur and Medic.  This brings me on to paradigms.

A paradigm is a party composition based on the roles mentioned before.  You can have six of these and can customise them however you like.  You can have offensive, defensive, healing paradigms or a mixture of a few.  This really mixes things up in terms of battle strategy.  During battle, you can shift between these paradigms at will.  So if something isn’t quite going your way, enable your paradigm shift to Combat Clinic.  This will have a sentinel who will guard themselves and take all damage (reduced) in place of the party while the other two as medics will get to work on healing.  These paradigm shifts can really turn the tide in battle.

The Crystarium is the character growth system in which you can develop all of the characters within the six roles.  It pays to pay attention to the characters and see within which roles their strengths lie and develop them.  Here you will gain additional abilities, strength, HP, magic, and so on.  You will spend Crystogen Points (CP) to develop your characters.  It’s sort of a 3D version of Final Fantasy X’s Spheregrid.  This again breaks the mold of a traditional RPG levelling system in favour of creating your own development path.

I was playing this on the PlayStation 3 as part of my backlog, and oh my god has it aged well!  Final Fantasy XIII has to be the best looking game I have played on the PlayStation 3 (so far).  And I’m not just talking about the pre-rendered cut scenes.  The environments are beautifully detailed and all the effects in battle are stunning.  If this game was given to me to play with no prior knowledge of it and I was asked to guess when it was released, I could happily say that this looks as good as some games in the mid to late stages of the PlayStation 4 generation.  But this is to be expected.  Final Fantasy games have always looked ahead of their time.  My only regret is not having an Xbox Series X to play this on through backward compatibility.

The voice acting does little to convey any real emotion but does a good enough job for us to care for and relate to the characters.  Notable cast members are Troy Baker (The Last of Us, Uncharted 4, Bioshock: Infinite) as Snow Villiers, and Ali Hillis (Mass Effect Trilogy, Resident Evil: Revelations, Ratchet & Clank) as Lightning.

Final Fantasy XIII is the first of the main series that doesn’t have Nobuo Uematsu at the composing helm.  Uematsu was contracted to score Final Fantasy XIV at the time.  Much like the graphics, superior music composition has been a staple in the series.  Thankfully, Masashi Hamauzu does not let us down.  Having worked with Uematsu before on Final Fantasy X, it’s safe to assume that he knew what it was going to take to make it work.  The score is composed of themes evocative of the narrative situation and the battle theme is as infectious as ever.  You will be humming it for hours after you put the controller down.  For the international release of the game, the theme song was a song called My Hands which is performed by British singer Leona Lewis.

The game is fairly linear up unto chapter 10, by which time I had put in about 35 hours.  Here the world opens up and going forward you can take side quests and an abundance for hunting missions called Cie’th Stone missions.  These offer a veritable playground of grinding opportunities to develop your Crystariums.  It is highly recommended you do whatever extra you can because it’s at this point the difficulty curve suddenly jolts up at a 45-degree angle.

This game has received its fair share of criticism over the years with fans citing it as “not a Final Fantasy” game.  Everything about this game is a Final Fantasy game.  It has magic, monsters, mythical worlds, a deep story, amazing graphics, and music.  The battle system was refreshing and although it did take a while to get used to, it is immense fun and one of my favourite battle systems in any RPG.  The way it plays out on screen is very active, fast, and action-packed.  It forces you to strategise and experiment with the party formation.

This may be controversial, but for these reasons, I award Final Fantasy XIII the Thumb Culture Platinum award.

Disclaimer: This game was reviewed from my personal collection 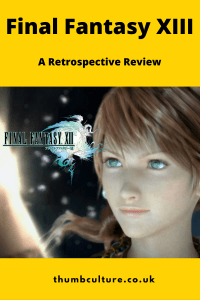