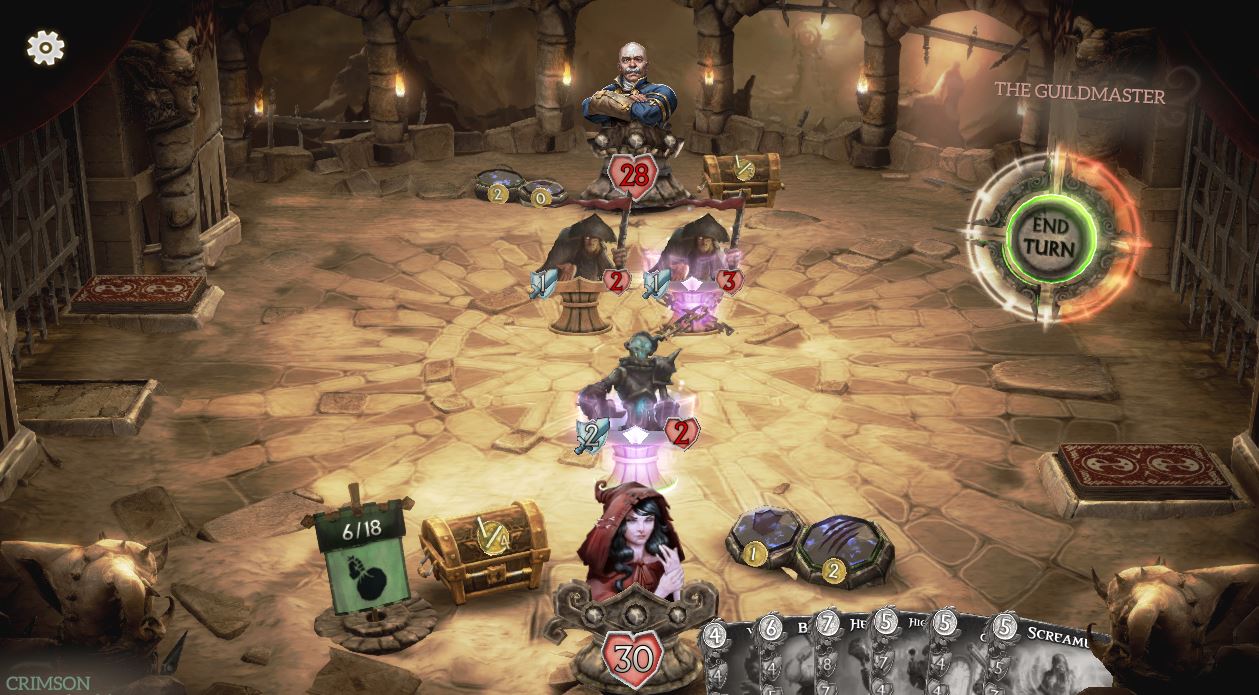 Fable Fortune is the latest offshoot in the massively popular Fable franchise. Designed by Tom Wimbush, published by Mediatonic, and developed by Mediatonic and Flaming Fowl Studios. Fable Fortune is everything you would expect from a Fable-themed game. Loosely related in lore and style, the early release title features a collectible card game mechanic with the ease of automation and the flare of animation. It’s a game of strategy and tactic, where taking chances can have great reward or great consequence.

You play as one of six distinct Heroes and face up against challenging NPCs or real life opponents if you’re brave enough to chance it. Choose a quest at the beginning of each match, decide between good and evil part way along your journey, and ultimately battle to be the last man (or in this case game piece thing) standing.

Use cards to attack your opponent, to boost your current cards’ stats, or to carry out any number of random actions. Use coins to strategically draw cards, block oncoming attacks, or strike your opponent’s hand directly. Manage your resources wisely in the fast-paced and relentless game.

Fable Fortune plays like Magic the Gathering, but without the mana, the midnight rendezvous at Denny’s, and the tedium of managing a massive deck of cards. Instead of spending mana to draw cards, you spend coins. The number of coins that you have in your treasure chest to spend slowly increases as the stats of the cards and the general difficulty ramp up. It happens in such a cohesive way, I can only really describe it as well-planned and fair.

Your card selection ranges from soldier/monster cards, to support cards, to random cards that don’t make much sense but are fun to use anyway (my favorite was The Boot – a literal boot you throw at your opponent for a single point of damage). Each card has a coin cost to play it, but the price for some cards can be fairly high, so you have to be deliberate when selecting. You can also spend your money to select a highlighted target – ideally, this will be one of the soldier/monster cards that you placed during your current turn – that your opponent must attack before targeting you, and you can use an extra coin to attack directly. There are quite a few components at play during a turn, but decisions become intuitive once you get used to playing.

There is a diverse set of characters to choose from, each with its own strengths and unique collection of cards it’s paired with. After working my way through the gamut, I found myself leaning toward the Crimson, the lovely shapeshifter, because I figured out how to work her cards so that I could actually win (the game is definitely hard, but I’ll get to that in a minute) and, well, she was kind of a freaking badass. I’m a sucker for a strong woman, and this was no damsel.

Fable Fortune is hard, but it’s definitely not relentless. The lack of any real tutorial mode makes it a difficult game to just pick up and play, but once you learn the basics you’re able to fine tune your craft from there. It’s a strategy game, so naturally, you’re challenged to think ahead and get creative. It may seem like a good idea to spend all your cash unleashing your most powerful warriors, but fail to leave enough coin to assign that grunt as the highlighted target and you may find yourself facing the brunt of your opponent’s battalion.

It’s well-designed, smooth gameplay that takes the tedium out of typical tabletop card gaming. There is an immense amount of diversity in Fable Fortune given the number of characters to choose from, the bonus tasks you can select along the way, and the good vs. evil decision that alters the remainder of your game. I’m no mathematician, but I imagine there are nearly an infinite number of ways to play. Not to mention that you can play online against people, play cooperatively with your friends, or keep playing against the NPC on Normal difficulty like me because you’re too much of a baby to risk getting slaughtered.

It’s an early release game and as such is not in its final phase, which means it’s only getting better from here. I imagine a lot of the mechanics and such will stay the same, but fine tweaks will sort of smooth out the edges, which is never a bad thing.

The graphics are everything you would expect from a Mediatonic game. They’re rich, colorful, and oh so nice to look at. The palate is inviting and sets a great stage for the mystique of the fantastical world. The details are meticulous and create an overall crisp and enjoyable environment.

There are some great animations that go along with each move that happens in the game, which makes for satisfying feedback on actions. When your monsters land an attack on your opponent, they bounce and shake around in reaction to the strike. When a character in the game dies they explode into a fiery ball of shame and defeat. Card abilities all come with effects – such as lightning that travels across the screen, or giant balls of poison that erupt in the shape of a skull – and the backdrop for the entire scene is robust and so well thought out. I mean what else can I say, it’s a gorgeous game!

The audio is also everything you would expect from a Mediatonic game. It’s diverse and entertaining. The mood fits the setting of the game to a T. The music is thematic and expertly crafted to immerse you into a world of fantasy and whim. It brings your right into the lore and atmosphere of the Fable universe. The gameplay, in general, is met with great feedback.

Each move that you make calls upon a bright and snappy sound; it makes you want to click on everything just to see what noise it makes. Coins jingle excitedly in anticipation for the draw of your next card; opponent game pieces explode with fire as they fly off the screen following attacks. It’s a nice backdrop for an exciting game of cards. Not too in-your-face to detract from what’s happening, but present enough to keep things interesting.

Characters and monsters egg each other on with antagonizing and playful calls, and the disembodied crowd jeers each time an attack is made. The voices are charming with an old-timey feel, and though the dialogue definitely called for an eye roll or two, it was nice to have more than just background music while playing.

Given the variety of playable characters, the massive number of cards to choose from, and the endless combination of hands and strategies a player can choose from, the replayability of Fable Fortune honestly seems relatively endless. Get tired of a Hero type – switch it up. Sick of being the good guy all the time – try evil on for size (I hear the dark side has cookies, might be worth a try). The point is, until you tire of the mechanic this game is going to be a great playtime and time again.

I was pleasantly surprised by just how much I enjoyed Fable Fortune. As a fan of the Fable franchise I had high expectations, but CCGs can be clunky and tedious if not done correctly, so I had my apprehensions. This game is addicting. The first few times I played I was quickly annihilated, but as soon as I understood the mechanic I became obsessed with perfecting it. The fact that there are so many different ways to play, so many cards I haven’t tried – even now I’m thinking about playing it despite all of the other “important” things I’m supposed to do.

It’s a great game that lives up to the name and expectation. This game lands a solid Gold Award with a 9/10. I would recommend this to anyone that’s a fan of CCG games – it doesn’t quite get a 10/10 because Fable fans might not be as enamoured.