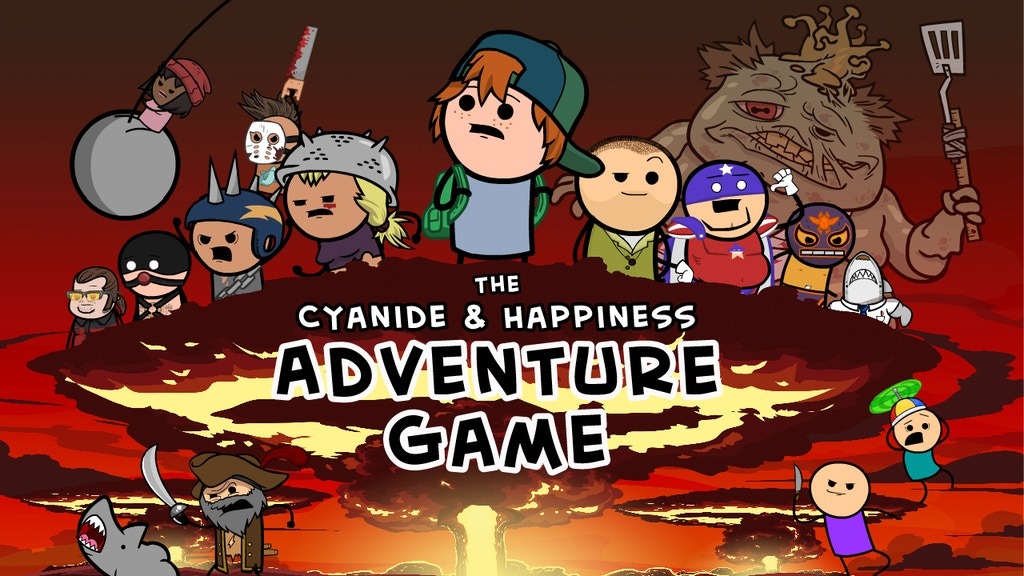 The latest addition to the Cyanide & Happiness franchise is the episodic video game Cyanide & Happiness – Freakpocalypse. This review is for the PC version of Part 1: Hall Pass To Hell. Developed by Explosm who created Cyanide & Happiness as well as Skeleton Crew Studios (Grave Chase) and published by Serenity Forge (Half Past Fate). Inspired by games such as South Park: The Stick of Truth branch out into making this dark comedy adventure RPG. Explosm building their franchise from their webcomic to card and tabletop games, and even a previous PC game Rapture Rejects.

After a very successful Kickstarter, Freakpocalypse was released with such rewards as the titular online short character Shark Dad making an appearance. The game doesn’t shy away from the mature content of the franchise from blood & violence to foul language to sexual language/content. Cyanide & Happiness – Freakpocalypse is available now on PC and Switch.

As a new fan of Cyanide & Happiness, hearing about an RPG was very interesting especially how well South Park did it. I and everyone at Thumb Culture would love to hear what you thought. Let us know what you thought of Part 1 and what you hope or expect next with Freakpocalypse.

Freakpocalypse takes place in small-town America miles from the nearest big city where you play as Cooper ‘Coop’ McCarthy. Coop is a loner and an outsider who is just trying to survive high school. As Coop, you deal with being bullied by the popular kids to finding a date for the upcoming prom. The game begins with Coop dreaming of being a superpowered sidekick named SuperCoop who saves his mentor and the school. This dream gives a unique way of delivering the controls and game mechanics while still being entertaining.

The game is a 2.5D side scroller that works well when combined with the design style from the franchise. I appreciated the blending of typical high school belongings and RPG items. Using a backpack for inventory and Coop’s diary for the quest log, map, etc was clever. Various items found along the way will let you customise Coop’s outfit. As a result, there is no shortage of interesting combinations. With the environment and people, there is a surprising amount of detail and interactivity. But relying on this did get tedious quite quickly while playing. These quests or chores felt like padding out Freakpocalypse to further what comes next rather than standing on its own

Where Freakpocalypse excels is the game’s setting and characters. My experience of American high schools is from TV & film but I found myself relating to Coop as a fellow outsider at that age. The secondary characters embody the stereotypes and even exaggerate them e.g. the star quarterback being a dumb brutish type dating the mean girl cheerleader. Talking to NPCs with heavy pun-inspired names, for example, Ian Conclusive tickled me more than it should have. The dialogue throughout is very tongue in cheek and satirical even towards itself.

For my review of Freakpocalypse on PC, I played on high graphics settings and found the game ran smoothly. There is the option to go from low to ultra graphics settings and v-sync is available. As previously mentioned the cartoon art style follows the Cyanide and Happiness franchise. I found that this worked well with a contemporary adventure RPG like the recent South Park games. The attention to detail in areas such as science class and the cafeteria was strong and immersive. Set in an exaggerated version of the present-day and despite the cartoon design, Freakpocalypse still feels realistic. Not including your friendly neighbourhood Shark Dad of course.

The game’s real strong suit came from the character’s voice acting. As mentioned earlier the characters, including Coop, are exaggerated stereotypes and the dialogue is what portrays that. From the dumb brutish football player, I mentioned earlier to the weasely principal the voices really match the characters. After reading some of the webcomics I believe fans of the franchise will not be disappointed by the character portrayal. The sound effects and score complement the setting and gameplay as you explore and interact with the world.

With Part 1 of Freakpocalypse, so far there are quite a few areas to explore and each is well detailed. Depending on whether you finish the side quests or looking for items to expand your outfit there are a couple of hours of content so far. The main story follows a fairly linear path so part 1 at least has little to revisit later. The plot and characters are engaging and entertaining in Part 1. And so I would expect when the whole game has been released that playing through again would be worthwhile.

I enjoyed part 1 of Cyanide & Happiness – Freakpocalypse with the setting, story, and characters that have been introduced in this exaggerated world. With a lot of detail and some very colourful characters, I enjoyed the tongue-in-cheek nature of it all. Despite enjoying that and the detail and design I feel the actual gameplay let it down. The quests/chores were quickly tedious and repetitive and felt like filler for part 2 and beyond. Overall I did like the game and will be interested to pick up part 2 and see what becomes of Coop and the town. 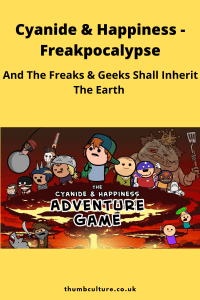