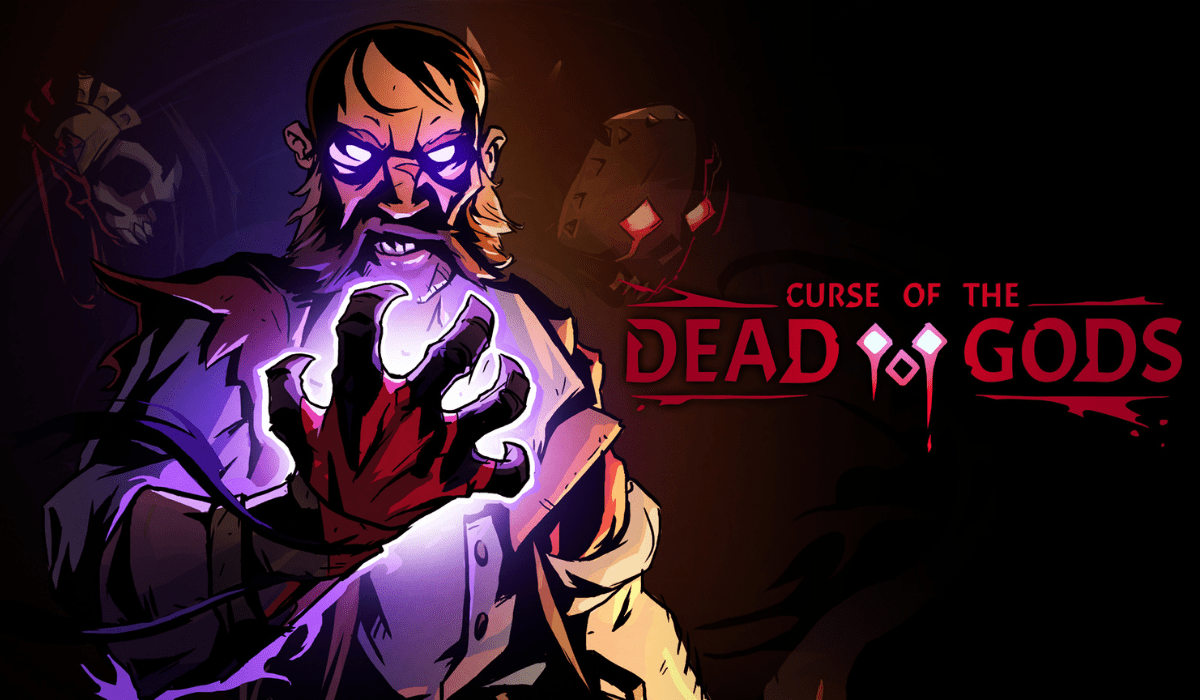 After spending almost a year in Early Access on Steam, Curse of the Dead Gods 1.0 is finally here. Feb 23rd 2021 sees the game receive a full release across multiple platforms. Developed by PassTech Games and published by Focus Home Interactive. Caradog McCallister has entered a temple cursed by the God of Death, Xbeltz’aloc. Trapped in an endless loop of death and reincarnation, can you reach Xbeltz’aloc and destroy him to end the cycle?

Curse of the Dead Gods – Bring on the corruption

This made my top 10 most anticipated Indie Games of 2021 and for good reason. Did you check this out in Early Access? Let us know what you think of the game in the comments.

Enter the cursed temple and attempt to fight your way through, avoiding enemies and corruption as you search for gold and power. You begin with 3 temples available, each with a certain element that determines what traps and enemies you’ll find along the way.

Each temple has a series of rooms, connected in a maze-like structure, leading to a Champion or Boss. Once you’ve cleared the first 3 temples, you’ll unlock the next 3 which are now double the length, with 2 bosses. Clear these and the original length is tripled in 3 further Temples. Once you’ve conquered those, you get the final dungeon where you’ll face the God of Death. Crystal Skulls and Jade Rings are awarded after beating each boss. These allow you to unlock Blessings and Forsaken Weapons respectively, which can help you on subsequent attempts. Before each run, you can be offered up to 4 sets of weapons to choose from. The equipment on offer can be upgraded by spending Crystal Skulls so the items are higher level or have better perks.

You’ll have up to 3 weapons at your disposal at any one time; main, secondary and special. Your main weapon is used for fast combos ending with a ‘finisher’, which is a heavier hit. Your secondary weapon can be used for ‘charged’ attacks. These attacks require holding the attack button longer to inflict more damage. Your special weapon is used for slower, but harder hitting combos. You also have a dodge and parry at your disposal which will both prove invaluable. A lot of your attack and defence actions cost a point of stamina. You start with 5 points and these refill while you are not actively fighting.

Corruption and Curses are 2 of the main mechanics in Curse of the Dead Gods. Corruption is gained in a number of ways – passing through each door to a new room, taking dark damage from enemies or blood offerings at altars.  When you hit a certain level of Corruption you’ll receive a Curse when heading through a door to the next room. These Curses are not necessarily a bad thing, but they will normally mean you have to adapt your playstyle. You can have 4 regular Curses before the ‘Final Curse’ is inflicted upon you. A single Curse can be lifted after fighting a Champion/Boss so corruption becomes another resource to be managed and utilised as you progress. Is it worth taking 70 corruption points for that weapon upgrade? How far am I from the next boss?

You have 3 stats you can improve during your runs. Constitution boosts your health, Dexterity improves your damage output and Perception allows you to find more treasure. Treasure comes in the form of new weapons or Relics. Relics grant you temporary stat upgrades or other useful boosts such as healing between rooms. You can carry up to 6 of them normally, swapping out for new ones when you reach the max. You’ll find treasure items as they are dropped by enemies, hidden inside chests or on offer at Altars. Altars require you to make a gold or blood offering, the latter of which will increase your corruption level.

On top of the regular Temples, a new Special Event is available daily. These are explorations with fun and unique twists to challenge you. It could be that the benefits of being in the light are removed and you must now seek out the darkness. Or you might start on 1HP and need to rely on getting kills to slowly build your health up. These events provide a great change of pace and a fresh challenge between regular Temples.

The visual presentation of the game is fantastic. The UI presents a lot of information and does so without feeling cluttered or overwhelming. I feel this is down to the information being shown visually through icons and imagery rather than text. At a quick glance, you can see your health and corruption levels, how many curses you have active and whether another is waiting for you through the next door. There’s also an icon to tell you if you are in the light or dark, but this isn’t even really necessary as you’ll easily be able to tell thanks to the brilliant environmental lighting. This is handy because you’ll take/deal different levels of damage between the 2 states.

Enemy attacks and traps are visually telegraphed in a clear way, allowing you to know when to dodge or parry. AoE attacks are also marked to allow you to get out of the way with plenty of time. These marked circles will be a different colour depending on the element of the attack; red for fire, blue for lightning, green for poison and purple for dark.

The Mesoamerican aesthetic of the Temples is beautifully crafted and consistent throughout. Each Temple is distinct, with a colour scheme to match the element and their own trap variants and enemies. The enemies are diverse too, with some having a larger form for their Elite version. It won’t take you too long to memorise the attacks for each enemy type and be able to plan ahead when heading into combat.

You’ll be able to tell a lot through audio queues too. Successful parries have a satisfying metallic ching sound to them. When you have become Corrupted, and therefore will be receiving a new Curse through the next door, a sound plays upon gaining the decisive points of Corruption. The combat music adds to the sense of urgency when in a fight. It also serves as confirmation that the last enemy has been vanquished as it recedes back to the background soundtrack, increasing the sense of relief.

Rouge-likes and rogue-lites are kings of longevity and Curse of the Dead Gods is no different. With 10 Temples and daily special events, it will be a while before you run out of challenges. You can always improve your completion times even when you’ve beaten the Temples. The Bestiary will also be a huge undertaking to complete. To do so you need to encounter each enemy type, defeat them a certain number of times to reveal their description and information and then beat them repeatedly without taking damage to unlock their artwork.

Curse of the Dead Gods is a blast. Fast, frantic combat, multiple playstyles and the ability to make tweaks and changes all the time keeps things really fresh. This is a game that you can jump into for 15-20 minutes and have a great experience, making significant progress. It is however also a game you can lose multiple hours to without realising. It really gave me that feeling of “Just one more run”. I award Curse of the Dead Gods the Thumb Culture Gold Award. 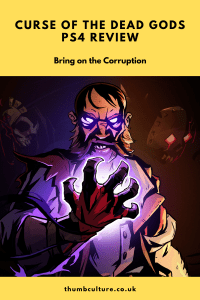