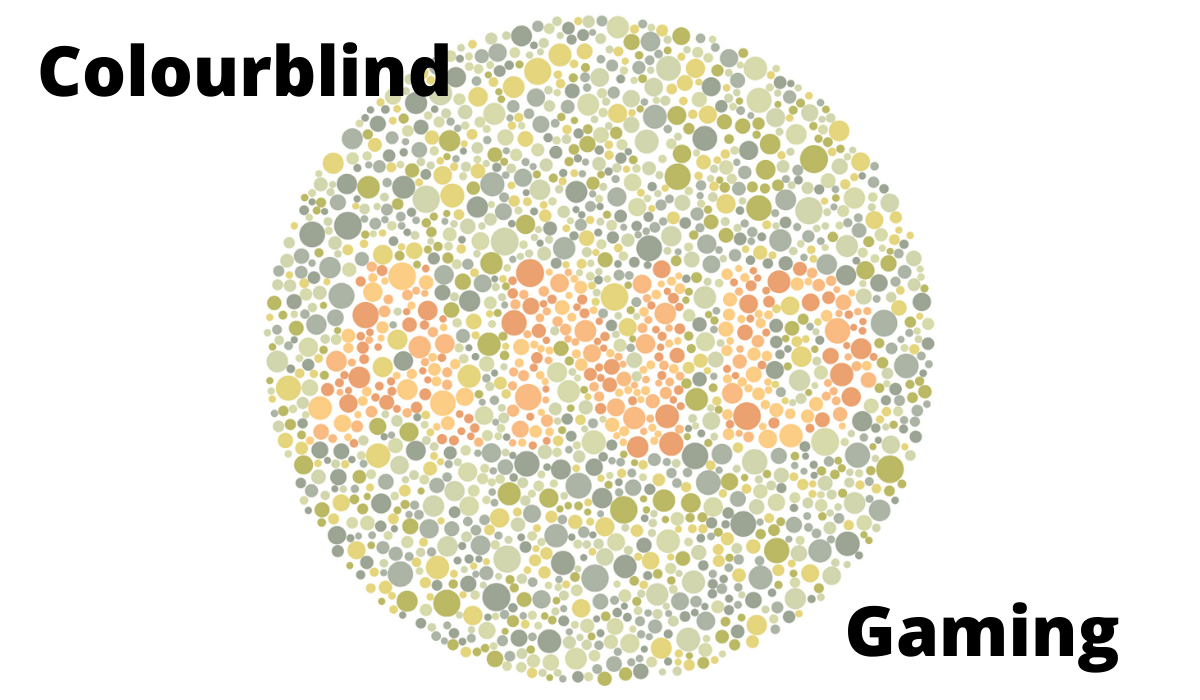 I first discovered I was colourblind at the age of 7 while in class at primary school, looking at a chalkboard and struggling to read the yellow writing. After this incident, I went to have my eyes checked and sure enough, I was diagnosed as colourblind. In this post, I’m going to be looking at what it’s like being colourblind and being a gamer.

Colourblindness affects 1 in 12 men and 1 in 200 women. Until recently, I had believed that colourblindness only affected men. This was the common belief when I was growing up. But we now know that even though it is a lot less common for women, they can also suffer from this type of visual impairment. 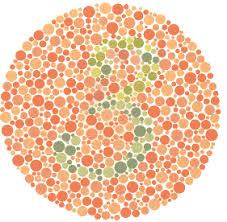 The classic colourblindness test can be carried out using Ishihara plates. If you can’t see the number 3, then you’re probably colourblind.

Attitudes, awareness and the development of colourblindness-friendly games and software has changed a lot since I was first diagnosed. But is it enough?

There are 3 types of colourblindness that will need to be taken into consideration:

This is the most common form of colourblindness which is split into 4 types:

⦁ Protanomaly: Red, orange, and yellow appear greener and colours are not as bright.
⦁ Protanopia: Red appears as black. Certain shades of orange, yellow, and green all appear as yellow.
⦁ Deuteranomaly: Yellow and green appear redder and it is difficult to tell violet from blue.
⦁ Deuteranopia: Sees reds as brownish-yellow and greens as beige.

People with complete colourblindness (monochromacy) don’t experience colour at all and the clearness of their vision (visual acuity) may also be affected. These are split into 2 types:
⦁ Cone monochromacy: Have trouble distinguishing colours as the brain needs to compare the signals from different types of cones in order to see colour.
⦁ Rod monochromacy or achromatopsia: Rare and the most severe form of colourblindness. People with rod monochromacy see the world in black, white, and grey.

Personally, I have Deuteranopia but colourblindness varies from person to person and can be present at different levels and have varying effects. So how does this affect gaming?

Day In The Life Of Being Colourblind

Before we take a look at gaming, I want to show you a day in the life of a colourblind person and how it closely resembles how the gaming industry sees us.  Like the majority of people, unless you are or know someone who is colourblind, the likelihood is that you’re not even aware or gave it a second thought.  That’s not to say people don’t care, its because that’s how the world works and commonly the 2 colours the majority of colourblind people can’t see together happen to be the most commonly seen together: green and red.

Yep, to the majority that are colourblind, we couldn’t tell them apart very well and it blew up on social media.  The only way that I could tell the teams apart was to check for their sponsor on their shirts.  That’s the only way I can identify who is who in this picture.

Using a shape, pattern or something that doesn’t involve colours is a common trait among the colourblind, as we can’t rely on the colours we are seeing. For something that solely relies on colour without much else to go by, that’s where it gets tricky – especially in gaming.

Historically I have always got on with the majority of games mainly because a lot of the older games were not as graphically challenging as today’s standards. A lot of it was pixels and almost all icon-based.  The Commodore 64 days used sprites, which were easy enough to navigate.  Similar to Super Mario and when Luigi came along (though for many years I did think Luigi was wearing red but in fact he was green) again I could tell things apart enough, so I could carry on with the game.

Why didn’t I have trouble back then but these days I appear to be having issues?  The lack of variation of colours would be the main argument until a better quality system came along and games could handle more.  However, with current games having such a vast variety of hardware at their disposal, games got bigger and this then comes down to the software developer that focuses on a more colour code type gameplay.

With games evolving, changing and becoming more powerful than ever, you can do a lot with them now this links into the section about a day in a life of the colourblind.  It’s not neglect but rather something that’s just not thought about, which is fine to a point as if you have no point of awareness, why would you include it as part of the game?

The problem with that is that a good section of the gaming world will miss out.

There are a few games out there that I want to play but can’t and one of them that’s gaining popularity is called Among Us. This game is heavily reliant on colours and this is how many colour options there are:

I have avoided this game purely I wouldn’t know the colours however the devs have recently come out with a road map since they decided to scrap Among Us 2 which includes a colourblind option. Amazing! That’s actually taking the game out of the bad category into the good as they listened to the feedback of players and could see that it was a needed feature.

However, it’s the community that can let the games down sometimes.  The Among Us subreddit is where I got this image from.  Just noting all the different colours someone can have but the top comment on it? “RIP colour blind ppl”.  Yep, that’s the first comment and just really annoying.  Just total neglect.  Could be playful in their mind but to me (I expect to other colourblind people too), it just makes us sad.

Cuphead was another game I really struggled on as that relied on a lot of colours to determine different things.  I ended up stopping playing the game in frustration as I couldn’t proceed, as pink objects are parry-able and that I see pink as grey.  This then adds more confusion to when things are grey, are they pink or not? I respect that there isn’t much leeway around it and can cause frustration.  However, on the Cuphead subreddit, a user has gone up above and beyond to figure out different things that can help colourblind people.  I guess it’s a bit of a spoiler but also, a nice guide.  I think I might have to give Cuphead another go perhaps.

Though do games need to be a little more accommodating to accessibility rather than trying to work out from trial and error what the colours are?

Well, as it happens, one of the big gaming companies that seem to have a bad these past years have accessibility up front and centre.  The last few titles from EA, From Battlefield 1, Battlefield V and more recently Star Wars Squadrons, the first thing you see is accessibility options.

Along with EA, World of Warcraft have some great Colourblind options.  This also changes the UI and the world around it but it wasn’t always there. It was introduced back in 2015 in patch 6.1 and has grown from there.  When I first started playing World of Warcraft I always thought the XP bar was blue until I enabled the colourblind mode and apparently it was purple all along.

There are other bigger titles such as Fortnite which also has an in-depth Colourblind mode where it changes the game colour too and more recently The Outer Worlds does not have a colourblind mode because it was designed to be playable without any colour information and uses other things such as indicators.

That for me, what Obsidian has done, is something that other game developers should focus on and it goes to the point I made in the Day in the Life of being Colourblind section that most people will use some form of indicator to distinguish objects rather than by colour.

If we look back just 5 years ago, colourblind options in games were few and far between, and most were left not playing the game right or in some cause couldn’t play some games at all.  The majority of the time you will only find this out by buying the game and finding out yourself if it is good for your eyes or not.

However, in today’s games, it seems to be more commonplace to find information if the game has colourblind features or not and in some cases, studios are going up above and beyond to really cater for the colour-impaired.

It’s the Indie developers that I expect not to have that option (yet), unless their game is popular so that they can afford to have the additional cost of development for colourblind options.

Sometimes it may seem like game developers don’t care about the colourblind but in reality, it’s budget and time that they could be lacking. However, it’s come along way from no options to being able to see the gameplay and I’m very happy to be a Colourblind gamer and can’t wait to see what the future holds. 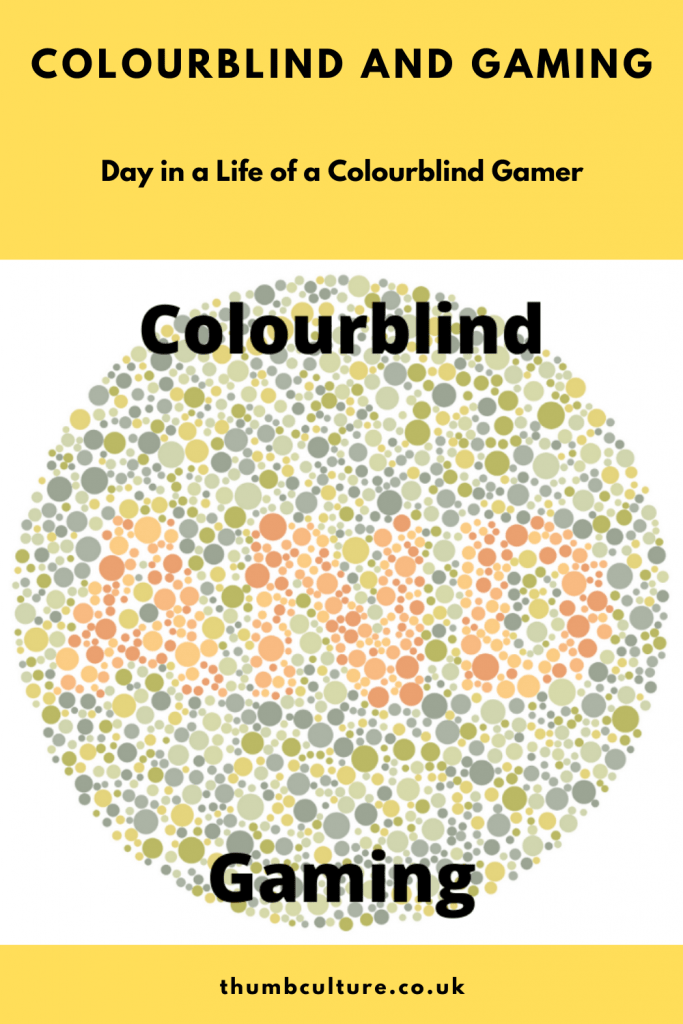 One thought on “Colourblind and Gaming”