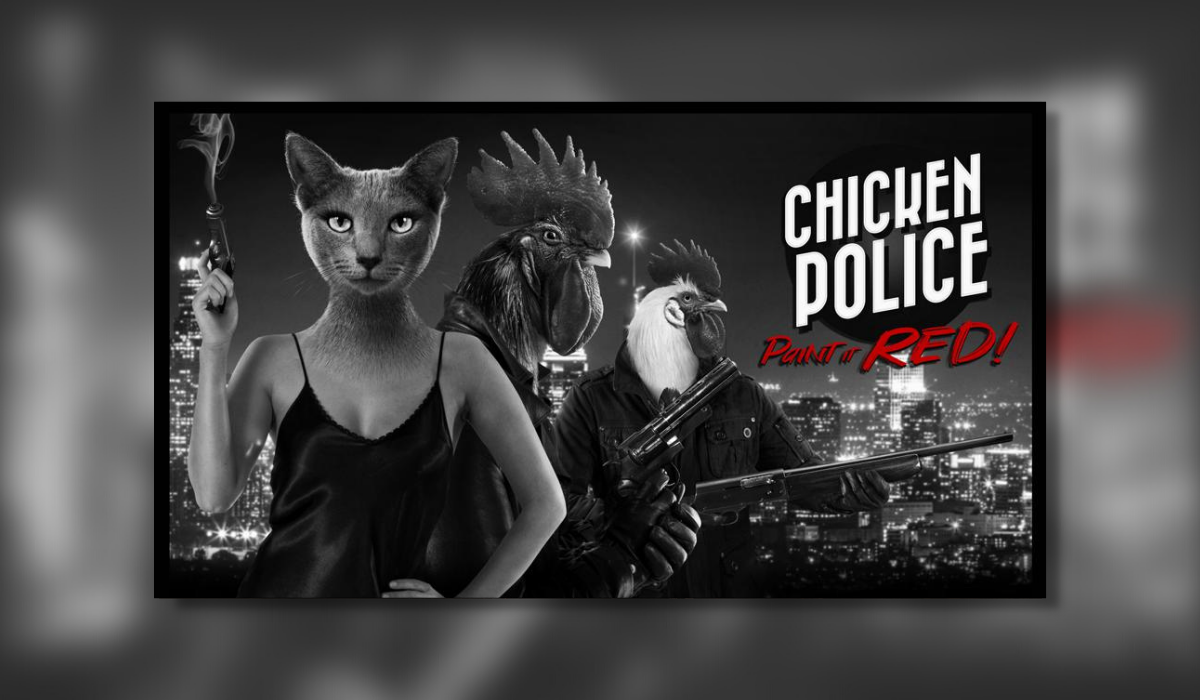 Developed by The Wild Gentlemen, Massive Miniteam, and published by HandyGames. It was released on the Nintendo Switch, Playstation 4, Xbox One, and PC on 5th November 2020. Chicken Police – Paint It Red is a buddy cop noir adventure with a great blend of humour, a gripping story, and some great artwork. What can go wrong with a game where you play as a detective who is a chicken? Well, let’s find out in this Chicken Police – Paint It Red Review.

Straight away when I saw the title. Chicken Police, I just knew I had to play it. I didn’t care what kind of game it was. But the fact that it was a detective game just his the right spot for me. A video game where you play a chicken who’s a detective just puts a smile on your face straight away. It also has some amazing artwork to go with it so this ChickenPolice – Paint It Red review is gonna be a hoot.

If you enjoyed this review then you can check out my latest one here. You can also catch up with what the rest of the Thumb Culture team is up to on our social media.

Chickens, chickens in long leather trenchcoats who are borderline alcoholics. This video game is just the game that keeps on giving. I guarantee you will never play a game like this. Chicken Police – Paint It Red tells the story of Sonny Featherland who was once a superstar cop, along with his partner Marty MacChicken. They were the best cop duo in town until a case they were working on left them nearly killing each other.

Now decades later Sonny is still a cop but his glory days are behind him. He takes small cases while drinking himself into oblivion in his office. While Marty still craves the spotlight and loves the attention. Sonny avoids it all and likes to keep himself to himself until one night when a mysterious stranger enters his office.

I’m going to admit that at first the gameplay can be a little daunting but give it some time and it just comes naturally. When the stranger called Deborah enters the office she gives you a case so it’s down to you to use your detective work and solve what can politely be said as a very crazy case.

You use your interrogation skills to question the wide array of characters throughout the city. But it’s not just about asking questions and getting clues, because if you ask the wrong question or go about it the wrong way then they won’t be happy and can even withhold information which later makes it harder to solve the mystery.

But you’re not alone on this adventure as you also get to partner up with your old cop buddy (Yes the one who tried to kill you decades earlier). You both bury the hatchet and work together. The gameplay as a whole is just great. Interrogating people is fun, visiting the different locations is always a blast as they change every time you go to them. Meeting the absolute bonkers characters is the main selling point of this game. There are over 30 characters and each one has its very own distinctive personality.

I am trying so hard not to give too much of the game away as it is quite easy to put a spoiler in so I’m just going to say what you (YES YOU), you absolutely need to play this game. There are video games that come around that just consume you and Chicken Police is one of the diamonds in the rough. The fact that this is an indie game just makes it all that sweeter. Just go and play it, but first, finish reading the rest of this review.

The graphics in Chicken Police – Paint It Red are absolutely fantastic even if they can be a little creepy at times. The classic noir style gives the story that extra edge and it wouldn’t be the same game without it. Every aspect of the graphics is a mixture of real-life photos and photorealistic background imagery. If you love classic movies like The Big Sleep and The Maltese Falcon then look no further. Even with characters resembling legends like Humphrey Bogart and Jimmy Cagney. Each scene just puts a smile on your face.

The audio is great. Going back to old movies from the 1940s and 50s. The soundtrack is exceptional with a hint of some jazz in there. It just fits the mood of the game perfectly. The voice acting is fantastic as well with performances from Kelly Burke, Kerry Shale, and Shai Matherson. That’s just naming a few as the cast is great and does an amazing job at bringing the 1940s to life.

Trust me when I say that this isn’t a game you can play in one sitting (well not without getting a sore bum). You will not be short of a story when it comes to Chicken Police. With it being purely story orientated there are so many hours that you can plug into this game. Just to put it into perspective for you. There are over 8 hours of voice-acting dialogue.

This will take at least an easy 25 plus hours to complete and then there are all the collectables and hidden tuff the game has to offer. My advice is to take your time and pace yourself. Because playing this for too many hours will make you want to interrogate a real hamster or fight a rooster.

My final thoughts for Chicken Police – Paint It Red is that words absolutely cannot give this video game any kind of justice it deserves. It is a marvel of a game and it is easily the best video game I have played this year so far. I cannot wait to get stuck back in and play it again but from a different perspective.

The soundtrack, the real-life photo graphics, and the sense of humour. Everything is just truly an experience and it’s certainly one I won’t be forgetting for some time to come. So it’s with great pleasure that I give Chicken Police – Paint It Red The Thumb Culture Platinum Award.