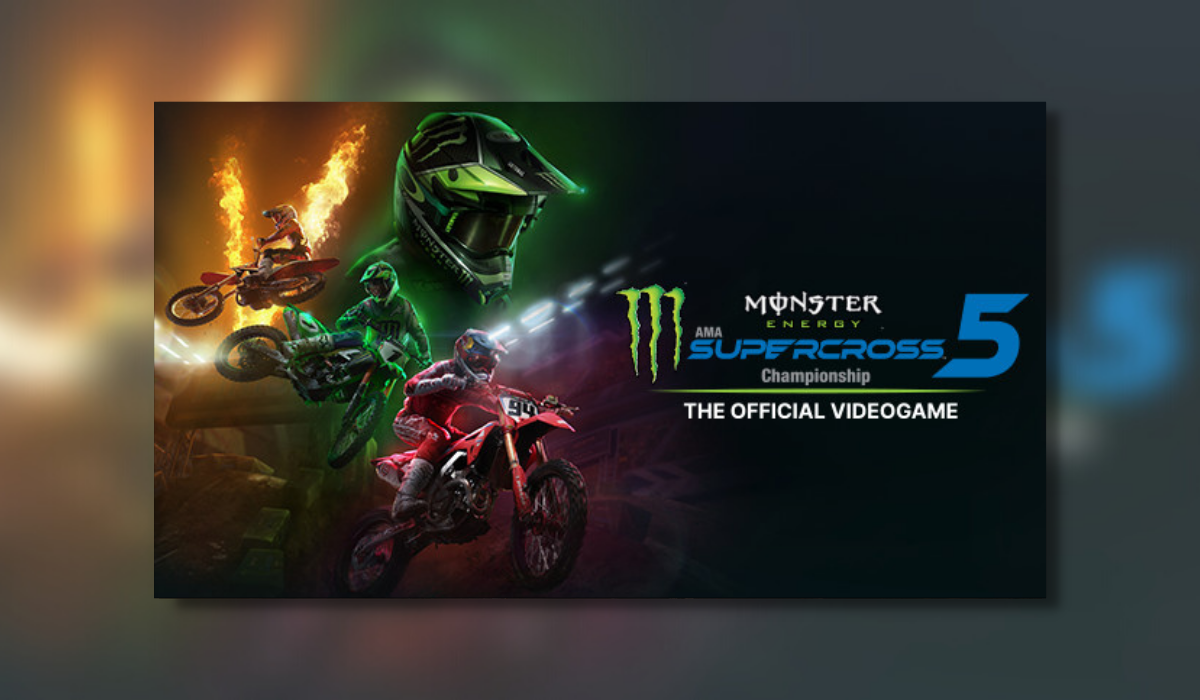 Developed by Italian studio Milestone, Monster Energy Supercross 5 is the latest release in the annual series and the second to release on next-gen consoles. Having seen what they achieved on the acclaimed Hot Wheels Unleased and coupled with my pining for the Motorstorm series of games to return, I was excited to check this title out.

Monster Energy Supercross 5 – Who will gain the Holeshot?

As I started into the Futures Academy I was impressed and bewildered at the same time. Impressed by the tutorials which feature fully voiced explanation videos teaching how to master the different skills in Supercross. However, I was baffled by the really low resolution of these videos. These tutorials are a welcome start for newcomers but could do with being more fleshed out.

I’m a fan of the use of the thumbstick – with the left stick for steering and the right for shifting the rider’s body weight. It works really well. The tricks however would be better moved to the face buttons as I didn’t ever feel in control doing any whips or scrubs. 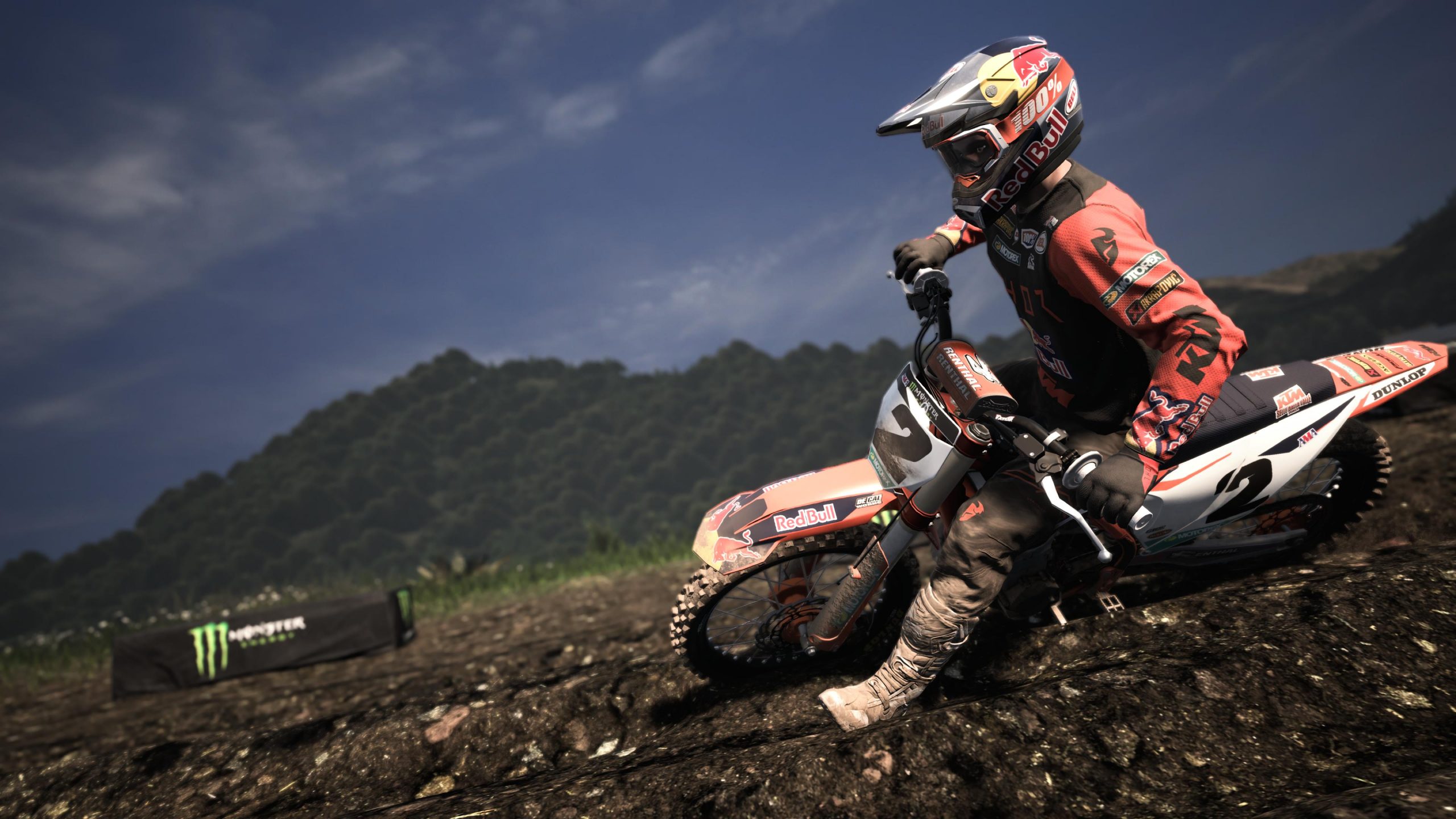 Speaking of tricks I never felt compelled to do any as the AI riders never performed any during events and the uncertainty of me pulling them off successfully versus the reward for doing so just did not entice me whatsoever. The bikes also feel kind of weightless so making the bikes feel heavier would greatly improve the experience in my opinion.

The adaptive triggers and haptic feedback implementations leave a lot to be desired. I was forced to reduce the trigger effect down to the lowest level as during gameplay I felt the DualSense controller was going to have a heart attack. I was genuinely worried that the game would break my controller.

The Career mode features a Skill Tree that offers upgrades to cornering, bike control, braking, scrub, and physical assistance. At the time of writing, I have unlocked all but 3 of these skills but have not felt any benefit whatsoever from any of them. This kind of skill tree feels very out of place in this game and without any readable measure of the rider’s skills on screen, this system seems so pointless. I think having skill upgrades tied to different unlockable gear with stat buffs tied to each would be a much better approach.

For a current-gen title, the load times feel really sluggish – some work on optimisation is definitely needed. The number of times the splash screen with the games logo is shown is just downright ludicrous and the number of presses of the X button to get a race started gets so annoying.

The visuals on display are fine but lacking for a supposed current-gen title. The bikes seem like they are kind of hovering on the surface rather than riding through the dirt. This game is crying out for dynamic track degradation where the path the tyres take leave physical grooves and indentations. The aforementioned Motorstorm featured this back on PS3.

After my initial couple of races and with no experience of real-life Supercross, I took to YouTube to check out the spectacle to compare how the game fares. It has to be said that the presentation of races is fairly on point. The opening ceremony of the events and the podium celebrations are excellently recreated.

The lighting throughout feels off though. That is until you hit an event with rain and the visuals look so much better. The rider animations are the real stand-out feature for me. The movement is so well executed and captures the manoeuvres and gestures of the real-life riders so well. Bravo to the animation team for their work here.

Kudos to the dev team as I experienced no issues with slowdown to framerate even when there were 22 riders vying for position. I did however have a controller lockup after around 28hrs of play. This happened during a qualification session where the controller completely locked up with the lightbar a solid orange colour. The game continued to play and still thought I was controlling as my last inputs were still being received. I had updated the PS5 to a new firmware earlier in the day (which included controller firmware) so this was possibly the cause.

The game does suffer from some graphical issues. Very noticeable track texture detail pop-in is a constant problem, especially on the outdoor training tracks and extra events.

I also had a major visual issue when equipping an unlocked helmet for my character. As can be seen in the image below the equipped helmet and the representation of it in the race are very different.

Similar to the graphics the audio is fine. No sound difference was noticeable between the different brands of bikes I tried with different teams in the career mode. It would be nice to have the option to have that iconic scrambler engine sound come from the controller speaker. I think this would really add to the immersion.

The overall presentation does suffer from not having full commentary, which seems to be a big part of the real life experience. I would say to drop the create a character for career and have a fictional made rookie for the game so that decent commentary could be added to the races (similar to how the F1 games operate for career).

Having put 18hrs into Monster Energy Supercross 5 and not knowing I could play in first-person, I came across a retweet from the publisher of the game showing gameplay in first person and I quickly returned to the game. I had early on found the camera adjust in the settings menu and thought this was all I could change – the game never suggested to me that I could change view.

I found the first-person view and oh boy does it make a difference (especially using the inside visor view). The lighting feels so much more realistic, the sense of speed is tremendous, and jumps feel exhilarating. Even the steering and drifting felt so much better and I no longer had to look at the floaty looking rear wheel. 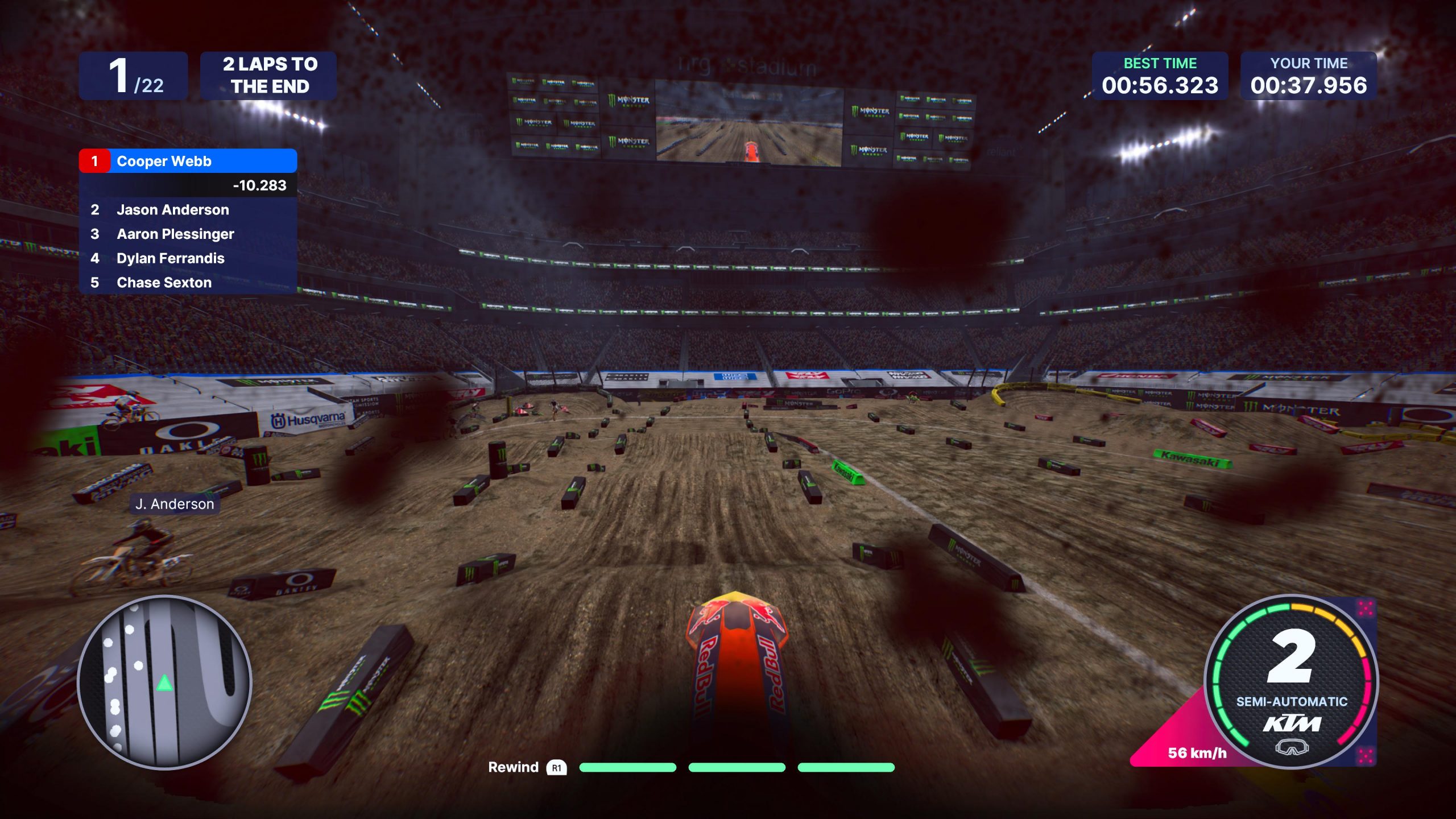 Animations in this view again are excellently crafted, further adding to the sense of realism in this view. This is my recommended way to experience this game.

The trade-off of using the first-person view is the game exhibits some issues with texture tearing on the tracks. In my experience, this issue only affected the training and extra event sections so I was happy to stay using this view.

At the time of writing, I have completed just over 30hrs of gameplay trying to hone my skills and complete challenges.

There are single-player modes, online multiplayer, time attack, plus the custom track builder and custom helmet designing tool too.

Additionally, there are journal challenges that track your racing milestones, a photo mode, and an extensive trophy list. There is plenty here to keep you busy should the game manage to get its hooks in you.

If this were a preview of an upcoming game then I would be saying I’m excited to see what the team achieve with the final product, but Monster Energy Supercross 5 left me conflicted. There are some things to applaud and I get what the team was aiming for here but ultimately this game feels unfinished and unpolished and for me does not justify its AAA release pricetag.

Hardcore and casual Supercross fans may be able to overlook the shortcomings of this title and have a fantastic time with this game but for me, it would require a more polished experience to get me to come back for more.

For this reason, I give Monster Energy Supercross 5 the Thumb Culture Bronze Award.