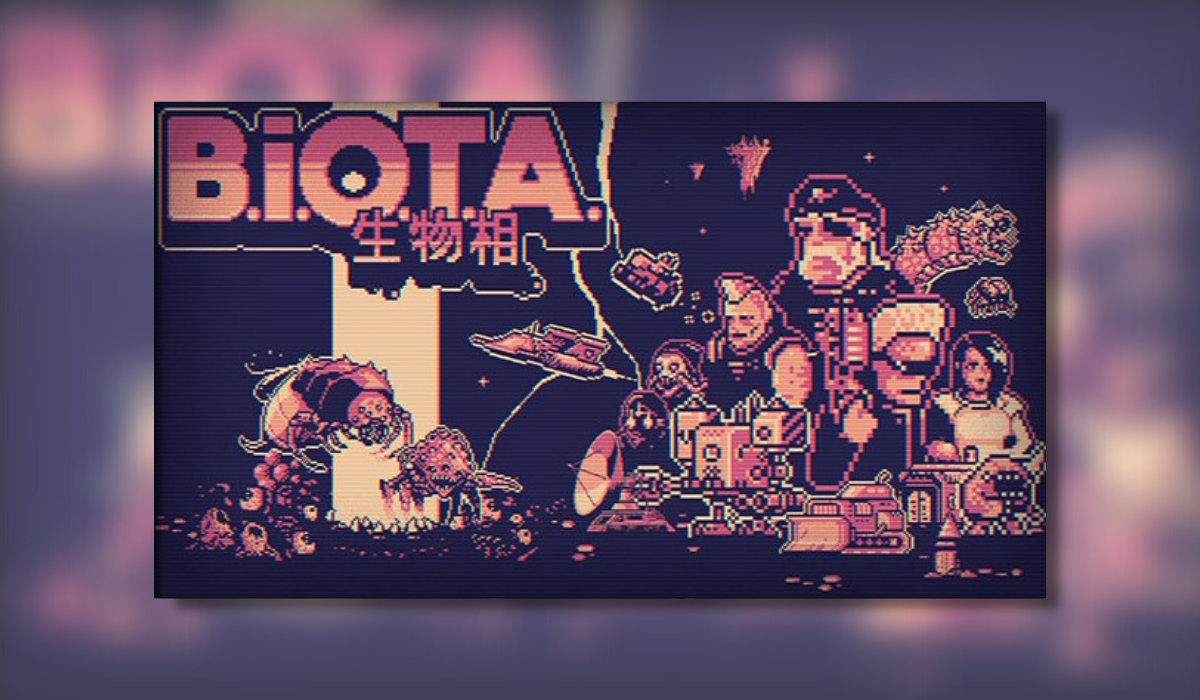 Developed by Small Bros and published by Retrovibe. B.I.O.T.A is a 2d Metroidvania action platformer that was released on the 12th of April 2022 for the PC. Let’s bring back some good old nostalgia shall we with this B.I.O.T.A review.

B.I.O.T.A – These Aliens Won’t Even See It Coming

When you say 8bit to gamers the first thing that will pop into their mind is Mario, Castlevania, Metroid, Sonic. Every now and then a game will surface that uses the old school 8bit graphics and give that game a modern twist. B.I.O.T.A is one of those titles so strap into for some gaming goodness.

Straight away off the bat, you’re going to recognize that B.I.O.T.A is a game that is easy to play but hard to master. The game is set in a futuristic world where aliens have infiltrated a mining colony. You lead a team of mercenaries and try to stop the aliens before it’s too late.

This may be an 8bit game but the controls are far from what you would expect from the 80s era of gaming. The controls are fluid and responsive and actually make for some fun platforming. Platforming is one of the things you are going to have to master, or at least be pretty good at. With B.I.O.T.taking on a Metroidvania style gameplay, you will have to get used to a lot of wall-jumping that is very reminiscent of Ninja Gaiden on the NES.

The levels can be very hard to navigate as a lot of the screens look the same but with frequent checkpoints throughout each stage. It won’t take you long to get back to where you were if you do die and trust me when I say that you will die a lot in this game. Each level is trial and error especially in the latter stages as the difficulty really ramps up.

There are ways to upgrade weapons that you really need if you want to take down some of the big bosses as they can be real bullet sponges. Not forgetting the variety of transport at your disposal. Take to the skies in a starship, battle underwater in a submarine and dominate the land in a giant mech. But if taking your time through a stage to perfect some of your gameplay then you could always speedrun stages to avoid as many enemies as you can.

The graphics and the audio is where this game really shines. The core game itself is great but these 2 factors are superb. Of course, the game gets its inspiration from the classic 8bit games of the 80s. But an option to use different colour palettes just hits you right in the nostalgia feels.

The little pixel animations you get are so warm and charming that it would be criminal to skip these little scenes. There are over 50 colour palettes to unlock. There range from the Game Boy to Virtua Boy graphics (why anyone would want to unlock the Virtua Boy colour palette is beyond me but its there)

The sounds and audio are brilliant as well. With some tunes ranging from some techno to music that sounds like it’s been done on an 80s equalizer. It really does bring back the good old days when you could actually understand music and it was simple and really toe-tapping stuff.

There are many hours of fun to be had in B.I.O.T.A. I simple playthrough can range between around 8 to 10 hours depending on if you upgrade all the weapons for each member of your team. But I think that the most fun goes into speedrunning it.

Now, speedrunning may not be everyone’s cup of tea but I feel like this game is perfect for it. The feeling of going through each stage as fast as possible while pulling off some amazing skills in wall jumping and beating each boss as fast as possible just gives you a rush. But there is still plenty to do in B.I.O.T.So it’s up to you to take your time and enjoy the ride or go for a record time.

My final thoughts are that B.I.O.T.A is one that every retro gamer absolutely needs to play. Even if you are not a retro gamer this game will tick many boxes for you. Its wonderful pixels, the gameplay and control, the fantastic music and the overall nostalgia trip just make you want to keep playing one more stage.

I tip my hat to the developers for a great game they have managed to create. So that’s why I am going to give B.I.O.T.A the Thumb Culture Platinum Award.