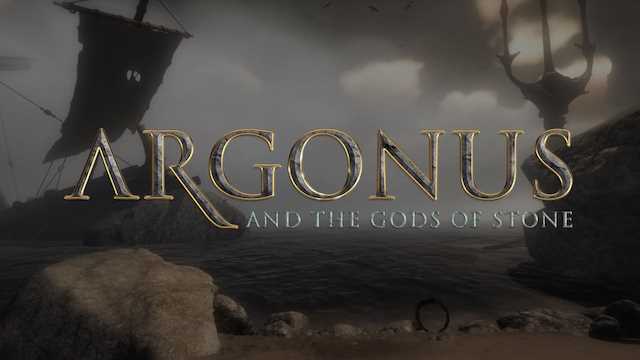 Zojoi bring us Argonus and the Gods of Stone, a chance to delve back into the past of ancient Greece, well maybe the films of the 70s and 80s about it. Time to get all nostalgic and maybe find a golden fleece, a mirrored shield or sever the head of a gorgon. Loincloth on, shield raised and sword as sharp as health and safety will allow.

Argonus and the Gods of Stone is a traditional first-person adventure. Those familiar with Greek Mythology will be quick to pick up on the use of the word Argo, so it is assumed that Argonus is going to be related to the great ship in some way or at least the Argonauts. So let’s get the game started with a few clichés:-

Excellent, now we have the premise of a game.

Argonus and the Gods of Stone sticks to the tried and tested WASD format to move around, you generate a map as you are a skilled cartographer and you have a satchel that you like to keep things in. Walk around, examine, meet the dead crew of the Argo and some others as well. Find everyday objects, find plants, find interesting objects and find more wood than a party of scouts at the playboy mansion. Chat to Athena who saves you, spot a Pegasus and find a battle that has taken place with a hydra. Keep wandering around until you see circles appear, these are the items of interest or the information that is available. If you have ever seen a film based in ancient Greek you will see the cast encounter a new area and then go sifting through every square inch of the set to look for clues as nothing is ever blindingly obvious. After all, nothing ruins a good film like actually having to work something out rather than accidentally stumbling upon it in an unexpected location. So far the only actual action I have intentionally tried to perform is throwing myself off a cliff. Alas, this is not allowed. I guess I’m stuck here then. If you are a fan of looking around, then Argonus and the Gods of Stone is definitely up your street. Unlock a new area and it’s like a whole new game, well actually it’s like the same game again, but you know what I mean.

Throughout your wanderings, your life seems to be narrated by a rather sexy female voice. Like the sound of gentle waves lapping at the toes of dehydrated sailor longing to feel wet again. Eventually cooling him and washing away the dryness until eventually he feels like he’s about to drown and wants nothing but to be dry again. By the wrath of the Stone Gods themselves does this voice become irritating very quickly. ‘It’s naught but a large barrel’, ‘a fire once erupted from this fireplace’, ‘this person is also dead’ will you please just shut up and I no longer want you to sneak into my bedroom at night. She also leaves random spaces           in the middle of her           sentences. This is not normal behavior.

If you love your Greek mythology then the information that you obtain is correct, the crew of the Argo were the actual crew, the relationships are all correct as well. Obviously just looking this information up on Wikipedia will save you an enormous amount of time instead of looking through the grass for the last piece of a mosaic. Maybe I’m just sucking the fun out of this game, but then again, maybe the game has sucked the fun out of me. Argonus and the Gods of Stone is poorly designed, poorly conceived and poorly executed. There is no level of intelligence required to play, there have been no puzzles to solve as yet, no intricacies to discover, and as far as I can tell, no way to get anything wrong. Eventually, you will find what you need to do. It’s a case of just investing time. I honestly haven’t been this disappointed since Penelope Rifkind refused to go to the primary school disco with me.

Argonus and the Gods of Stone has worked hard in this department. The environment looks good, everything seems to move as it should and you do feel like you are trapped on an island. There are a few issues with items passing through other items, but I have yet to see a first-person game where this doesn’t happen. There is a fair amount of repetition with the scenery, but then again, this is fairly commonplace. The graphics do a very good job of making Argonus and the Gods of Stone look like it is going to be a much more pleasurable experience than it is.

Argonus and the Gods of Stone has a very unobtrusive soundtrack, instantly forgotten once you exit the game. There is no increase in volume for action as  I have found no action. The water sounds like water, the creatures sound like creatures, the persistent droning on of the narrator stating the blindingly obvious does exactly that. Other than the narrator it’s all pretty good if truth be told.

Argonus and the Gods of Stone seems to have good intentions but falls short of the basic expectation of a game. There’s really no logic to the game, in fact, there’s really no game, it’s just a well constructed scavenger hunt for no real purpose. The knowledge base is sound, but like the rest of Argonus and the Gods of Stone, lacking of a point. Zojoi need to rethink the purpose of the game and how it unfolds to get the slightest bit of joy into the game for the player. The environment in which Argonus and the Gods of Stone is set in is very good, the game seems to have been an afterthought. This should have been right up my street, but I was led down a dark alleyway and mugged off by Hades pretending to be Aphrodite. Gutted!

Unable to throw myself off any high ledges or lay down to be consumed by Harpies was frustrating. Walking around looking for items in unusual places was frustrating. Not having the ability to have true freedom of movement was frustrating. The narrator was frustrating. Most of all though, the fact that there was no actual game was the most frustrating thing. Argonus and the Gods of Stone looked like it had so much potential, but it’s just a jumbled up scavenger hunt with no logic. I wanted a Monet and I got a Pollock. There is paint, it’s on the canvas, but it’s simply a mess. I was hoping for better. It wasn’t so much gods of stone, but game of stone.  Based on all of this I award Argonus and the Gods of Stone a Thumb Culture Bronze award.