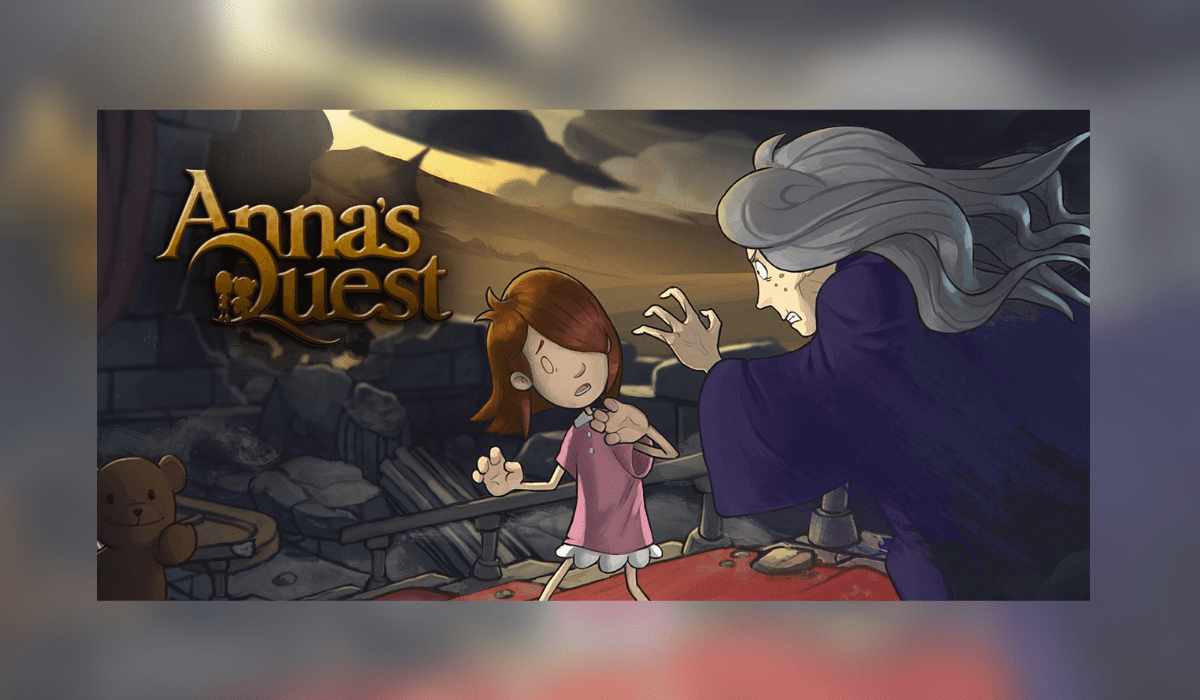 Almost exactly 6 years later, Anna’s Quest has made the jump from PC with a direct port to console. From developer/publisher Daedelic Entertainment we return to this 2.5D point & click puzzle game. Beyond that, it is also a hand-drawn adventure game depicting Anna’s journey and adventure. And featuring a melting pot of elements from the world’s fairy tales, folklore, and mythology. This Anna’s Quest review is based on the Switch version and is also available on PS4 and Xbox One.

Anna’s Quest is an apt title when describing the young titular protagonist’s journey in this wonderfully artistic game. Very much a linear single-player experience filled with detail in this modular story-driven game. We begin the game with Anna at a loss to save her grandfather from a sudden illness. Desperate, Anna seeks out a cure in the woods where she is kidnapped by the witch. The witch plots to take Anna’s inherent power of telekinesis. Anna soon escapes after finding items, solving various puzzles, and venturing into the world for the first time. She quickly finds an ally in Ben, a boy cursed by the witch to be an animated teddy bear. Exploring this world and meeting many colourful characters, Anna perseveres to complete her quest and stop this wicked witch.

For those of you who love solving puzzles then you will be very happy with Anna’s Quest. Puzzles and finding a use for various objects is the main game mechanic in this RPG. Interacting with and collecting objects often with red herrings meant a lot of trial and error. I found the reliance on puzzles to be frustrating at times, causing the game’s flow to grind to a fault. Even the telekinesis ability was unsatisfying as it was used at pre-determined points of the game.

The hand-drawn design is fantastic and the characters and story kept me invested. This fantasy-rich setting with a splash of present-day technology was an interesting blend of genre. Not to mention the melting pot of mythology, the supernatural, and fairy tales the game is born from. The personality of NPCs bordered on satire and got dark at times like Brothers Grimm tales. I found this tone worked well with the story and the all-around strong voice acting.

Even after six years the quality of Anna’s Quest still holds up with the Switch version. The graphics settings were set in stone and regardless delivered a solid experience when playing on TV and handheld. The game looks like it was pulled out of a storybook with the cartoon-style appearance, helped by the distinct areas. The visual design is one of the major strengths here and one can easily forget it is all hand-drawn. Ironically, Anna is the least detailed of the characters which is understandable with our protagonist and this didn’t take away from the game at all.

Paired with the visual design, the audio is just as good in Anna’s Quest. The voice acting gives life to the characters, from the unnamed tavern barman you meet to Anna herself. The score in the background adds to the tone of the setting and moment in the plot. Little touches with environmental sounds such as forest animals and footsteps over cobblestones are nice additions to the experience.

I found Anna’s Quest to be a very investing game as well as linear. With one playthrough you will know the puzzle solutions so perhaps you wouldn’t return for that. However, I would happily revisit the story to experience it again and who knows if I missed something along the way. The story is very rich in detail and returning may lead to new context and revelations of the in-game world.

Overall I really enjoyed Anna’s Quest and I’m glad it came my way and overall made for a fun few hours. The puzzle gameplay did get frustrating at points and affected the experience for me. However, the writing and voice acting in this immersive story helped me get past the puzzles. The visuals and audio were also great and strengthened the game in the fairy tale fantasy setting. I can see myself returning down the line and having another playthrough.

If you enjoyed this review, why not check out my review of Nanotale, another fantasy RPG where your typing skills will be tested.