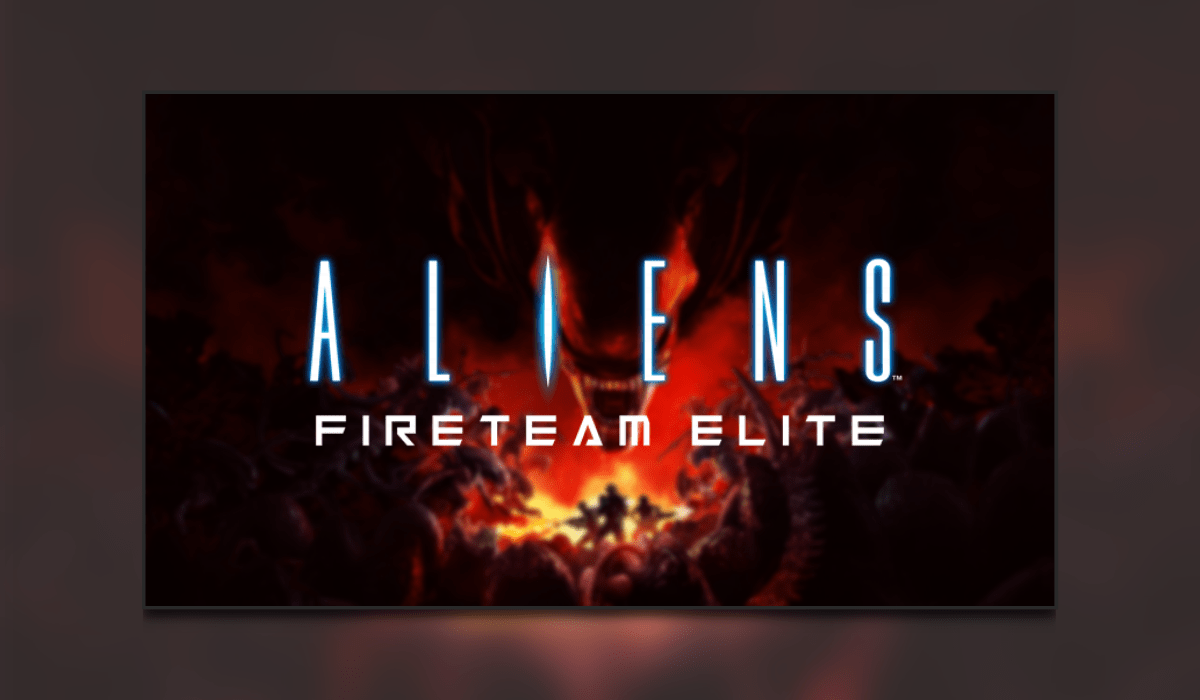 Welcome to my review of Aliens Fireteam Elite. Developers Cold Iron Studios and publishers Focus Home Interactive (Greedfall, A Plague Tale: Innocence) are releasing this on August 24th, 2021. This game will be available on PlayStation 4 and 5, Xbox One and Series X|S, and PC.

I reviewed this on the PlayStation 5. Will Aliens Fireteam Elite serve justice to the Alien franchise? Let us find out below. If you like this review you can read my previous review here where I played Zool Redimensioned.

Priority One is the first campaign in the game. Our main objective is to find and extract Doctor Timothy Hoenikker who is a scientist for Wayland-Yutani corp. Doctor Hoenikker has put out a distress call from the Katanga refinery. Are we too late to save the doctor? Or are we just in time? Due to being spoiler-free, I won’t reveal that here. What I can reveal is we have three missions on this campaign, each progressively getting a bit tougher as you learn to play the game.

There are five difficulties to play the campaigns at. Casual, Standard, Intense, Extreme, and Insane. The game feels rather hard at times on standard, but that could be due to the AI, which I talk about in more detail below.

We also have the choice of four “loadout kits”. Each of these has different weapons, abilities, and also different perks. The names of these four classes are Gunner (Assault class), Demolisher (Heavy class), Technician (Support Class), and Doc (Medic Class). Certain classes can use certain weapons, such as Demolisher is the only class that can use the Smart Gun. And my god, what a fun gun that is to use in this game.

Each weapon can hold up to three attachments also. A magazine upgrade, a muzzle upgrade, and scopes or sights. Of course, these offer things such as increased magazine sizes, increased reload speeds, better aim, more damage, and more. 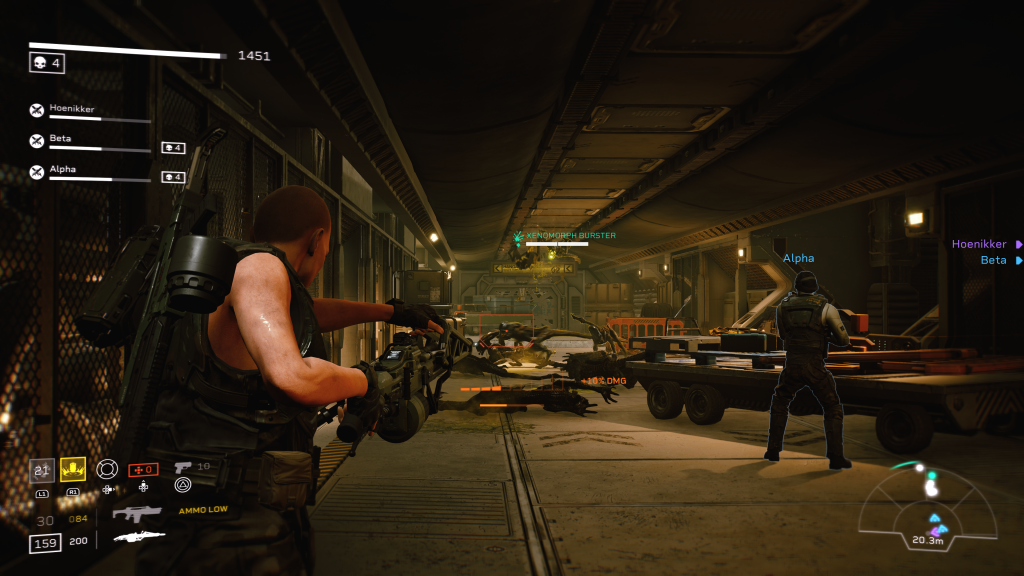 During campaign missions, we also have daily challenges to attempt to complete. These are called Tactical Opportunities. These involve you being tasked with several different objectives. Such as completing a mission as a certain class, eliminating a set amount of enemies with a certain type of weapons such as close quarters. Of course, there are more tactical opportunities than this, I look forward to seeing what’s to come. These also help keep the game feeling a little fresher when you come to play each time.

There are also “Challenge Cards”. These cards are a great idea and are chosen before you start the mission. These can help turn the tide of battle in any direction, your marines could be tougher, or Xenomorphs can explode upon death. Things like these help the game feel fresh. Also, if you use a negative card, you will earn more experience points and credits for completing the mission with that card enabled.

Gunplay in this game is great fun. The pulse rifle sounds just like it does in the movies. The Smart Gun has that awesome tracking feature where it helps you take down a room full of Xenomorphs with ease. Shotguns are great fun, they take those pesky bugs down rather easily. The abilities are awesome, I love the micro rockets that the Demolisher can use. All in all, this game has a lot of fun toys for players to survive with. During missions keep your eyes peeled. The game will reward you if you look around the areas. There are hidden caches and intel to be found which can reward you with XP and new items for weapons and your class.

One thing I felt let down within the game is the AI bots that join you on missions when no human players are available. They are definitely not intelligent. There were times when I felt myself getting frustrated as I had taken down a good amount of Xenomorphs and then being knocked and my AI teammates not picking me up for ages.

They also do stupid things like walk in front of you when you’re trying to shoot at the aliens that are tumbling down corridors towards you. Friendly fire is not enabled in the lower difficulties though so it’s not the end of the world. Friendly fire is only in the higher tier difficulties such as Insane. It just seems to be a problem at times when playing solo and trying to progress through missions.

Because of the AI being stupid at times, I felt that this was holding me back from progressing on some missions. One mission took me literally hours to get through because of how many Alpha Xenos slammed down onto us. It feels a little too much too soon and that should be later in the game, or, on the Horde mode in a later wave. A day-one patch will hopefully fix these simple issues.

The graphics are beautiful. Textures are dark, gritty, and sharp. Lighting and shadows look amazing, as you’ll see below. The 3D modeling in the game is perfect, again you can see this below on the Xenomorph screenshot I took. Weapon’s designs look just like the movies. The Aliens look terrifying, especially the bigger brutes. Just what you want from a sci-fi horror game. The game ran flawlessly on the PlayStation 5 and I experienced no issues or bugs whatsoever. You can click on these images to see them in full detail.

Audio in Aliens Fireteam Elite is also perfect. All of the weapons have familiar sounds, the pulse rifle sounds brilliant. The Xenomorphs sound just as horrible as they do in the movies and previous games. Action-packed music fills your ears when you’re in a firefight with your teammates and you have a swarm of Xenos charging at you down corridors. It’s all very good, especially when wearing the PlayStation 5 3D Pulse headset.

As we know the game can be played solo but this is a game made to be played online, over and over again. But I can imagine that Aliens Fireteam Elite will be even more enjoyable with friends or even some random teammates via matchmaking.

This is like one of those games that people spend hours on just to get better gear and attachments. Such as Destiny 2 or even Warframe. There are four main campaigns to play through, each containing its own set of missions. Upon completing all of the campaign missions you will unlock Horde mode.

Of course, being on the PlayStation there’s also a set of trophies to collect including the coveted platinum trophy. But I believe this will be quite a tough platinum to acquire. Good luck.

Aliens Fireteam Elite is definitely grower. I was stuck on the same mission for hours as mentioned above. This resulted in the game becoming a bit mundane for me for a while.

Hopefully, when the game launches people will pick the game up and it’ll be more fun with human players instead of the dopey AI bots.

I felt it was a bit harsh to give this game a silver award because it does well in areas like the Xenos design and the gunplay itself. That, plus it ran like a dream and I did not come across any bugs whilst playing. I give Aliens Fireteam Elite a Thumb Culture Gold Award.