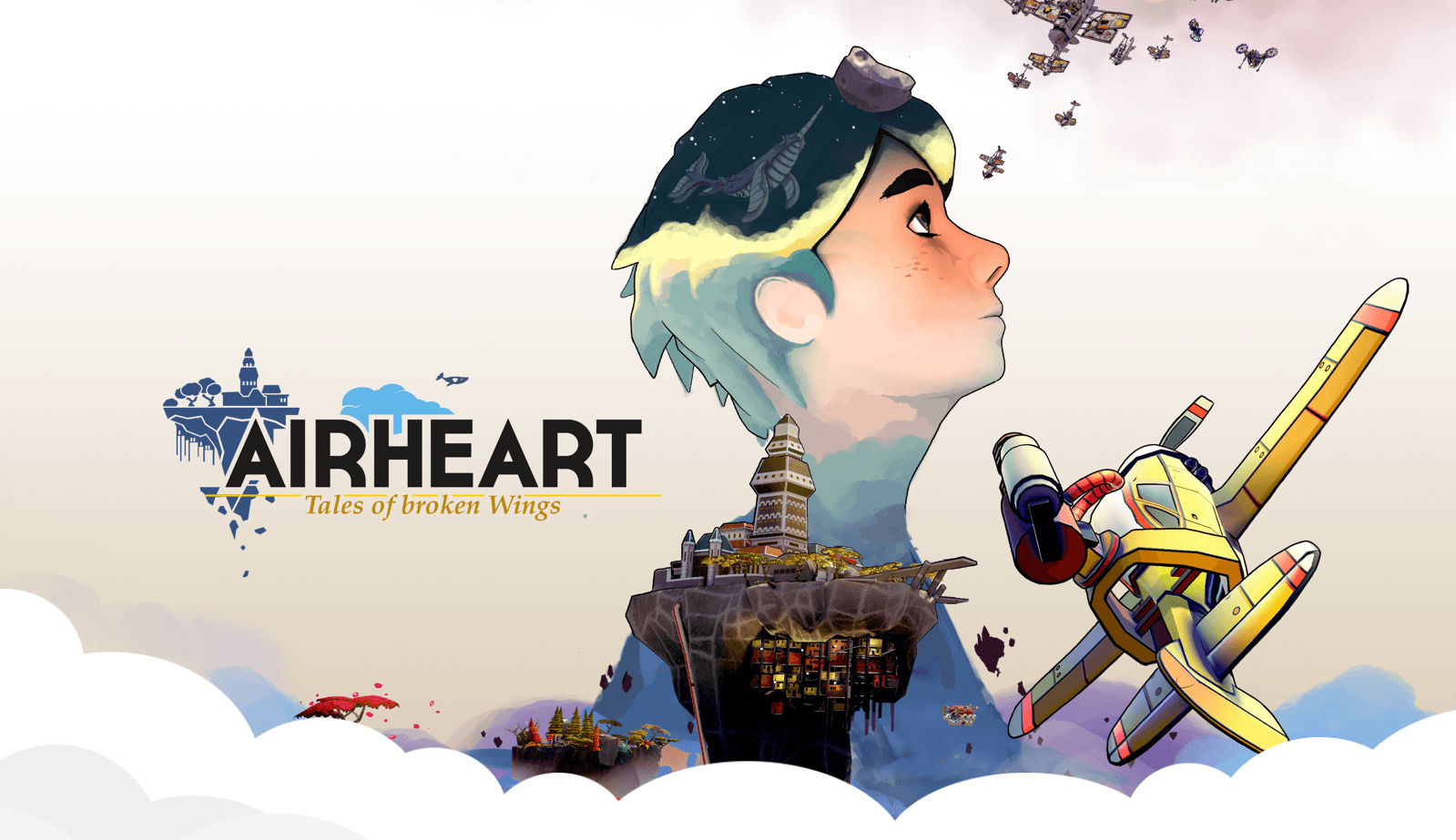 Blindflug Studios have decided to take us on a journey to the stratosphere, but will it be a meteoric climb for Airheart or an arduous climb to the top. Flying goggles at the ready and a tuna sandwich (you’ll see) and it’s time to pilot my plane into the sky.

Airheart is a twin stick shooter, a crafting game and a hunting game all in one. Bargain! The sky is split into different levels of altitude and your quest is to reach the top. Not just reach the top, but catch the legendary Skywhale. Launch your plane and play a little tutorial to get used to the controls. Learn to steer, to shoot, to harpoon things, all the essentials, then set off for real. So what’s to do? Well you need money, and money comes from fishing. Simply fly into the fish to catch them, it couldn’t be easier. Beware of over fishing though, it can happen, don’t stick to one layer, move around. Each layer has a jump station that sends you up a layer, just fly into it and hey presto, you are up.

The higher you go, the more pirates you find, but the more reward you get for catching the better fish. It’s a simple trade off. Kill pirates to find resources to use with crafting.

The flight controls are very good, I would recommend using a controller when playing on PC or you will have navigation and shooting issues. The more you play, the better you get, and upgrade your plane for a few perks. The enemy radar was very useful to help me run away.

There are other fishing planes in the sky that will gladly catch the fish you have your eye on. These planes will also get power ups and resources right in front of your nose. There is also a police plane that patrols the sky that seems to randomly shoot at you. My guess is that in the heat of battle the odd rocket will hit a simple fisher plane and this causes the wrath of the police to come down on you. You will do well not to have this happen a few times. Pirate planes seem to stick to the same area of the level, so clearing a level is generally quite easy. Shoot the bad guys to allow for safer fishing. Fish will die if shot though, so try to be as accurate as you can.

Remember where the jump stations are on each level as you have to traverse them all every time you set off from your hanger. You get home by diving all the way in one go.  Just avoid the obstacles on each level to make it back safely.

In Airheart, if you die, you die. There are no save game options, if you die you go back to the beginning in Rogue-esque style. The good news is that you will be better and braver every time and ultimately quicker.

Everyone who played games in the 80s will probably get to grips with this fairly quickly. There is no recipe book you can refer to for a successful craft, so you need to go old school. Pen and paper at the ready. Airheart helps you out a bit by showing what ingredients are included even on unsuccessful crafts. Crafting costs money, but not a lot. Keep experimenting until you need to go fishing again. The higher up you fly, you get different resources. This element of Airheart is fun, trying to crack the codes to get the right ingredients turns it into a bit of a puzzle game. Make weapons, upgrades and plane parts to save you from having to spend your heard earned money on them. Those pipes look like they will make good rockets, or maybe a new scope, or possibly some new framework.

If you don’t fancy trying your hand at crafting, there is also the option in Airheart to just shop for your upgrades. Each individual part is upgradable so you don’t have to buy a whole new plane at a time. Just fish for money and then spend spend spend.

Airheart provides a quality setting to fly around. Planes look like planes, fish look like fish and trees, well they look like trees. The graphics are smooth and slick and everything fits well together. Blindflug are not trying to be cutting edge, but gently lead you through the game with as little confusion as possible. Nothing is over done, and nothing is lacking. The hammer fell and the nail was hit square on the head.

The audio in Airheart is a bit nondescript. Guns make shooty noises, your plane goes vroom and the police go ne na ne na ne na. There is some background music to accompany your quest which is neither good nor bad, just there. The voice acting is good and you get a feel for the person who you are playing. I could have done without the slide guitar though, spend too long at base and you’ll see what I mean. The audio really doesn’t add or detract from the game.

Airheart is a solid fun game that can either be played in a long gaming session or dipped in and out of when you fancy a break from whatever else you are doing. The key word is fun, well until you die that is. Blindflug Studios have produced a very good game that ticks a lot of boxes and I think that people will be still playing Airheart on and off for a while to come. Set yourself a challenge and go one level higher every time you take off, see if you can survive.

Disclaimer: We received a code to complete this game review. No fish were hurt in the playing of this game.