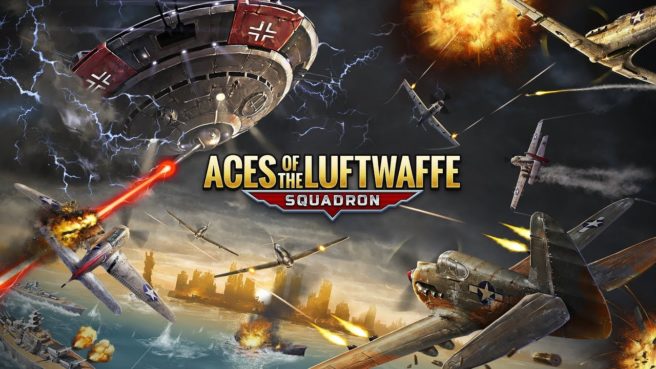 Aces of the Luftwaffe: Squadron by German developer Handy Games, who incidentally were acquired by THQ Nordic last month, is a retro arcade vertical scrolling shoot’em up that sees you take command of fighter aces as you take on waves of Axis planes, panzers….oh and even a flying saucer as you attempt to foil the occult plans of the Luftwaffe.

Aces of the Luftwaffe: Squadron begins immediately and you are introduced to 4 fighter pilots, namely; Steve Davis, John King, Melissa Monroe and Mark Taylor.  The 4 pilots all fly in a squad formation with you controlling the front most aircraft.  Like many games of this genre such as the legendary 1942, Xenon and Sky Force the idea is to shoot at anything and everything that is coming your way while ensuring that you dodge the glowing orbs of enemy fire and also collect rewards which in this instance are medals and power-up crates.

There are 5 chapters to the game with each chapter consisting of 5 missions.  Each mission features wave after wave of enemy which are fairly easy to dispatch early on however their numbers do grow making the screen a muddle of gun fire and fighter planes!  Thankfully as well as your primary weapon you have a rechargeable secondary which serves to obliviate everything that happens to be on the screen at that moment in time.

There is a story that you are playing through chapter by chapter whereby the Luftwaffe are attempting to dominate the world led by a crazy professor whose dark and occult ways sees them obtain nuclear power.  The result leads to New York City becoming under siege, the Statue of Liberty destroyed and a whole crazy world of turret laden flying saucers and flying mechanical eagles.

On completion of each level you are rewarded in medals which serve to level you up and give you skill coins.  These can then be spent on upgrading your wingmen through each of their unique skill trees allowing thing like aircraft repair and better recharge times.  Be sure to find the hidden skill coin on each mission!  Each tier on the skill tree unlocks with each new chapter.

As a handicap, each of your fighter pilots have an issue that crops up during the first 4 missions.  This gives you a secondary objective to try and complete.  For instance Mark Taylor suffers from a strange sickness bug which means that you have to move slowly in order to regain the health bar which is indicated by the yellow circle around the main fighter plane.  Any rapid movements decreases the health and you will fail the side mission.  Successful completion awards you with bonus medals at the end of the level which goes towards your overall rank.

In the main menu you have the options to unlock new aircraft that give various perks to each of the wingmen.  Better critical hit chances, less wind resistance and collision damage are just a few of the upgrades you can expect.  The settings for the NPC wingmen can be unlocked and altered such as for Melissa Monroe’s Emergency Repair, the maximum squadron health rate percentage can be changed to allow it to trigger earlier or later.  For the players that are interested in their statistics, wonder no more! there is a statistic page that shows how many aircraft in total you have shot down and who is your best character, etc.  There are 4 pages of achievements you can obtain as well as the game difficulty which can be altered between normal and hard which later on unlocks extreme mode.

One feature which is pretty cool is the chance to play through the whole campaign locally with your mates.  Here you and upto another 3 friends, family members or pets with opposable thumbs can join you and fly around the 1 screen taking on the enemy planes, tanks and generally causing carnage.  Great fun!

Aces of the Luftwaffe: Squadron has a cartoony look to it which falls in line with the previous offering however overall this is nothing like the first game.  There is a great sense of depth in the game world when playing featuring fast moving clouds and a slightly blurry looking landscape below that becomes clearer the closer to the ground you are flying.  The movement around the screen is smooth with no juddering when multiple enemy are firing at you, something I would always expect nowadays however believe me there is still the odd game out there that seems to fall over when the going gets tough!

The levels are full of colour however you can easily see the bright orange enemy bullets heading towards you in time to be able to dodge them as well as the flashing arrows that indicate somebody or something to collect/pickup.

An epic Hollywood movie style orchestral soundtrack features in Aces of the Luftwaffe: Squadron which serves to match the mood of the gameplay at that exact moment in time.  From tense moments of your first wave to crazy boss battles and the jubilation of victory, the soundtrack has you covered.

All of the characters within the game are voiced throughout which I really like as I find in games it helps you understand the person’s persona better and obviously adds to the enjoyment of playing.  Sound effects of guns firing, bombs exploding and lasers sizzling all sounded marvellous with no distortion or audio breakup to be found.

Aces of the Luftwaffe: Squadron has 25 missions in all and features 6 big boss battles.  It will take you some time to complete as the levels do get progressively harder therefore it can be wise to replay earlier missions in order to smash out some more XP rewards and gain skill coins to upgrade your team.  Being able to play the game both solo or local with friends is a great option to have and brings a uniqueness to the gameplay as each of your co-pilots will bring something new to the screen, all be it they are great or die an awful lot!  This twined with the 4 pages of achievements should keep you busy long after you have completed the campaign.

I found Aces of the Luftwaffe: Squadron a fun vertical shoot’em up that had many humorous moments throughout the gameplay and cutscenes to keep me chuckling away throughout the carnage on the screen.  With a variance in secondary mission objectives throughout each levels by having the wingmen suffer problems that either hinder or aid you, there are times when all carefully thought through tactics seemingly go out of the window and you are in fact literally “winging it” to coin a phrase!

I award Aces of the Luftwaffe: Squadron a Thumb Culture Gold Award!

Disclaimer: A review code was received in order to complete this article.  Lots of planes were hurt in the process.